Frank Crocker is passionate about the game of Bridge and he is on a mission to introduce new players to the game.

On Wednesdays the yoga room at the Greenwich YMCA is turned into a gathering place for Bridge players of all levels. The group has a 10:00 am session for Advanced Beginners and Intermediates. They play relaxed Bridge. The 12:30pm group is a beginners group and is made up of players who never played before or are just returning to the game.  The third group, which meets at 2:00pm is the Topic/Convention Group who play and practice conventions. Crocker sets up the hands, so every hand requires the use of a convention.The only rule is to have a good attitude.

Crocker’s “Perfectly Polite Bridge Group, which recently changed its schedule, ” has the goal of creating a new culture for an old game. The setting is one of good sportsmanship and good will toward both partners and opponents.

Crocker said all are welcome, including beginners.

On Wednesday, a group that was a mix of beginners and experienced players, included John Friel who was one of the group’s original students.

He said that about a year and a half ago was searching for a place to play Bridge.

“At that time there was Bridge at the YWCA, and as I understood, they wanted very experienced players. They compete in a lot of tournaments,” he recalled. “Then, I was at the library and every book about Bridge had a card tucked inside it saying, ‘If you’re interested in playing Bridge, contact me,” he said referring to Crocker. 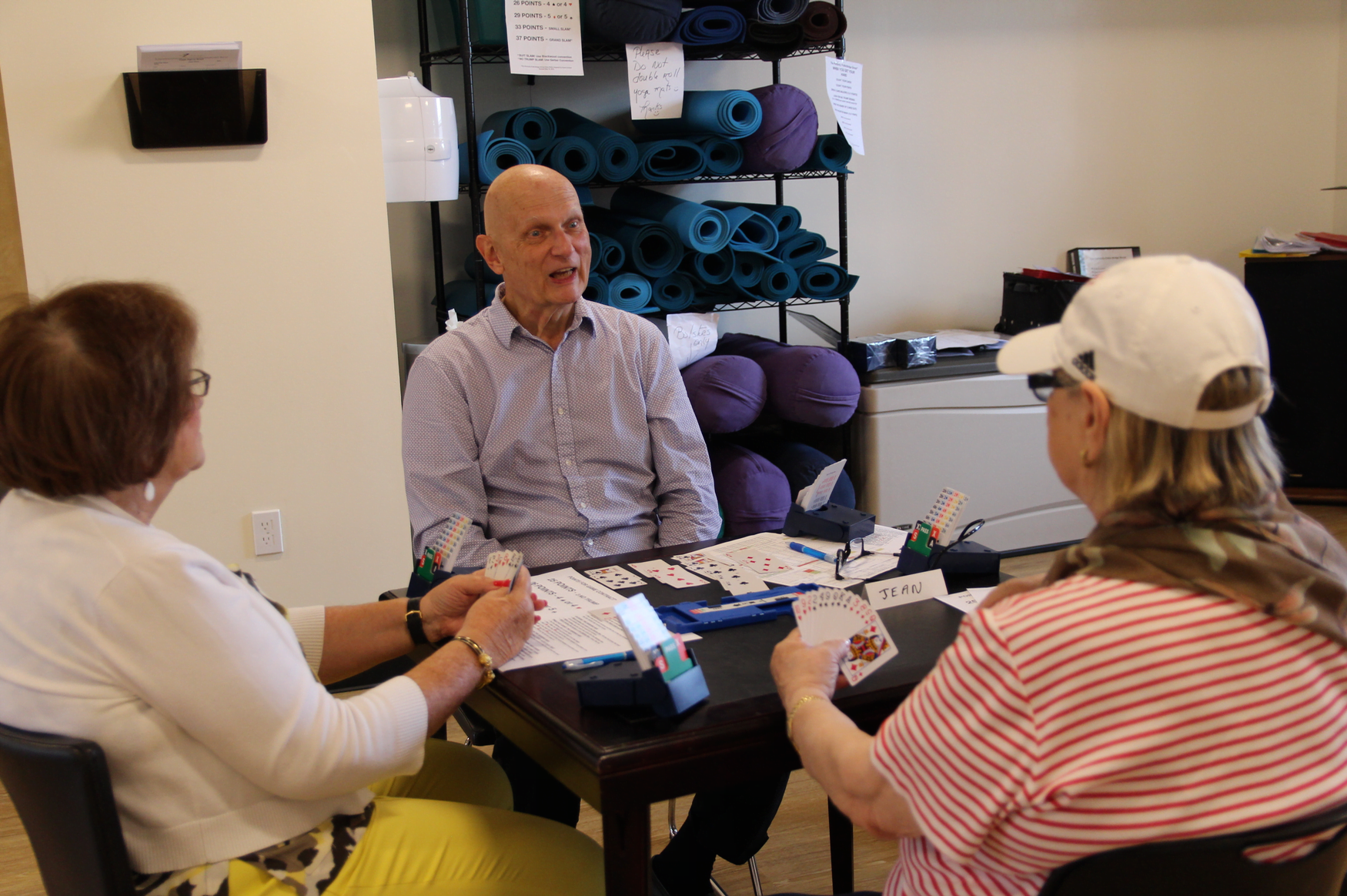 Frank Crocker, founder of the Perfectly Polite Bridge Group, explains to newcomers Ruth and Jean the basics of the game of Bridge. Sept 5, 2018 Photo: Leslie Yager

“It worked,” Crocker said, adding that he uses a variety of methods to spread the word about the Perfectly Polite Bridge Group.

“There is a large element of word-of-mouth, which is great. And, in addition to local media, Crocker posts flyers in delis, Starbucks, and at the library. “I also put the information on 14 different online tag sale sites,” he said. “I’m selling Bridge.”

Also, Friel said the YMCA has been very proactive at announcing their sessions and making the group well known.

Friel said what is unique about the Perfectly Polite Bridge Group is that people in general are very forgiving.

“You don’t want to join a group and have your partner screaming at you for making a mistake. The goal here is to learn,” he said. “There are times someone will make a wrong bid, and people will allow the person to re-bid, based on advice and discussion. It’s a learning forum and a chance to play.”

Indeed, on Wednesday two friends, Ruth and Jean, came to learn to play Bridge for the first time. Crocker immediately got them started, explaining the game in basic terms, stopping to answer questions along the way.

At another table, players talked about the different gurus in the history of Bridge, and how some feel Audrey Grant offers a better way of presenting bridge concepts than Charles Goren.

As players set up the new bidding boxes, Crocker said that while the group includes many players from Greenwich, people also travel from Stamford, Port Chester and Purchase, NY.

“It’s about the love of the game,” he said, adding that an important part of the session is to make mistakes. “If you perceive someone has made an error, smile, count to ten and consult the moderator.”

Crocker said fun supersedes winning. “If you find yourself angry or annoyed, I say, ‘Let it go and enjoy the game.’”

Friel explained the overall idea of Bridge. “You’re dealt a hand and you try to assess the worth of the hand. The idea is to come up with a successful bid.”

“In bridge you want 20 points,” Crocker explained. “I make the hands happen so they get practice with hands that don’t often come up.

Crocker, who has been playing bridge since the 1970s previously assisted in forming and mentoring a Bridge group in Westport. “It’s still going strong,” he said.