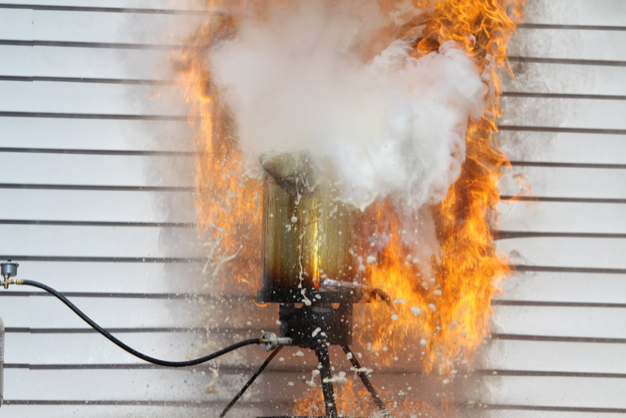 With Thanksgiving just around the corner, the Red Cross encourages families to prevent kitchen fires by taking some basic safety measures.

“Thanksgiving is the peak day for kitchen fires, and most of those are caused by unattended cooking,” said American Red Cross Connecticut and Rhode Island Region Executive Mario Bruno. “The good news is that home fires can be prevented by following some simple, safety tips.”

A recent Red Cross survey revealed that nearly one in five Americans (16 percent) admit to leaving food cooking unattended on the stove — a major cause of kitchen fires. Tips to avoid cooking fires include:

• Stay in the kitchen when you are frying, grilling or broiling food. If you leave the kitchen even for a short period of time, turn off the stove.

• Keep young children and pets at least three feet away from the stove.

• Move items that can burn away from the stove such as dishtowels, bags and boxes.

• Clean the stove and the area around it before turning on the heat.

• Turn pot handles to the back of the stove to avoid spills.

If a cooking fire occurs

If a pan catches fire, don’t move it. Slide a pan lid or cookie sheet on top of the pan to put out the fire. Turn off the heat. Keep the lid on the pan until it cools. Never try to stop a grease or oil fire with water – it will fuel the fire.

If the kitchen catches fire, make sure everyone gets out and call 9-1-1 when outside. Once outside, stay out. Never go back inside a burning building.

Download the Red Cross First Aid App at redcross.org/apps to get access to life-saving information on what to do for common, everyday first aid emergencies fire safety measures.

Nationwide Campaign Seven times a day someone in this country dies in a fire. The Red Cross has launched a nationwide campaign to reduce the number of home fire deaths and injuries by 25 percent over the next five years. As part of the campaign the Red Cross is joining fire departments and community groups nationwide to install smoke alarms in communities with high numbers of fires. The Red Cross also is asking every household in America to take the two simple steps that can save lives: checking their existing smoke alarms and practicing fire drills at home.

You can help people affected by disasters like home fires and countless other crises by making a donation to support American Red Cross Disaster Relief. Your gift enables the Red Cross to prepare for, respond to and help people recover from disasters big and small. Visit redcross.org, call 1-800-REDCROSS or text the REDCROSS to 90999 to make a $10 donation.