The goal was to put the “V” back in Byram Volunteer Fire Department. At a ceremony Tuesday afternoon Mike Bocchino of the Byram Neighborhood Association presented the department with a check for $3,000 to help reinvigorate the volunteer program.

Specifically, the volunteering needed “reviving,” according to Bocchino, who recalled a once “robust” program.

“I remember when I was a little kid I had four older brothers and three were volunteers and EMT. Due to circumstances as they are, our volunteer program fell by the wayside.”- Michael Bocchino of the Byram Neighborhood Association

In fact, the ranks of volunteers had shrunk until there was just one volunteer.

“When I left as chief in 2004, we had quite a few members. When I came back there was basically one active member.  I’d like to see 60,” District Chief Aaron Stahl said of his goal for growing the ranks of volunteer firefighters. “It’s tough. Right now this is a renters’ area. It’s no longer families like when I was growing up.”

“A lot of people work two jobs,” Fox said. “And they don’t have the time to do the volunteering. Therefore, ever since the economy tanked, the department tanked with it.” Fox said the Byram Veterans Association at 300 Delavan Ave has been very hospitable to the fire department, offering to loan space for fundraisers, for example.

Bocchino said the $3,000 would go toward uniforms and equipment for the volunteer fire department. Stahl said the department had grown by one or two new volunteers a month, totaling 15 members over the past year, and that the funds would also go for training volunteers, to get them certified.

Stahl said there had been other donations to the fire house including furniture, a refrigerator and TVs that were funneled through Needs Clearing House. He said those items helped the department reconfigure some of the upstairs space for volunteers to stay overnight during emergencies.

“If there was a huge storm like Sandy we really didn’t have an area for our volunteers and our community to stay like they have at Sound Beach and some of the other fire houses. So we took half of our meeting room and divided it up,” Walko said.

Dave Walko, who many know as a the administrator for Clark House at GHS, said, “The fact that they fund-raised so quickly to help us is a testament to this community and this part of town. We hope they never have to call on our services, but now we know they’re here to support us, and we’re there to support them.”Walko said the department’s biggest expense is the cost of training. “The Town has been wonderful helping us with that but we also know we need to do more on our end.” 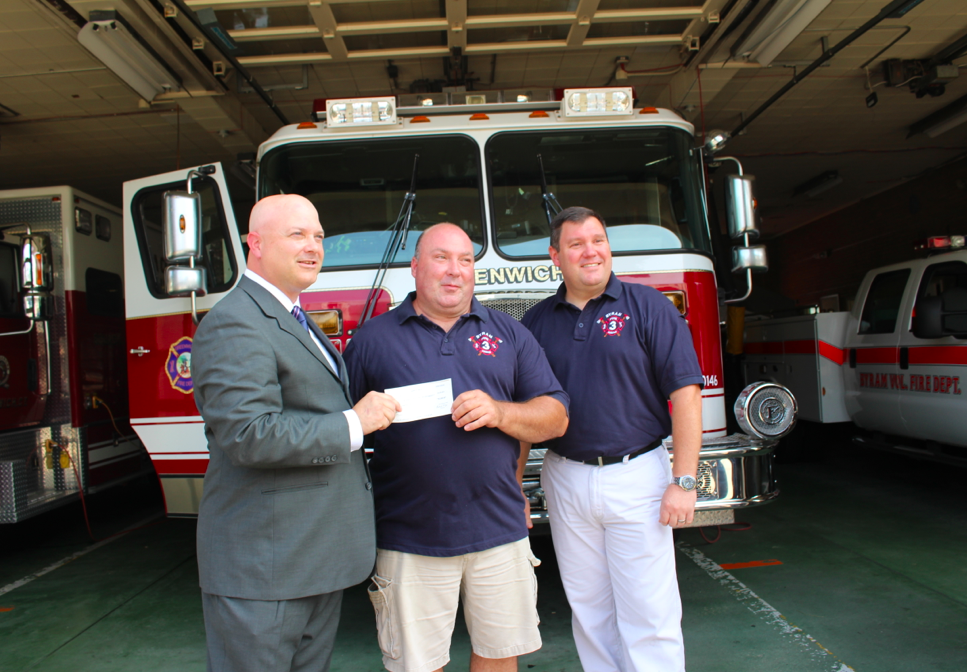