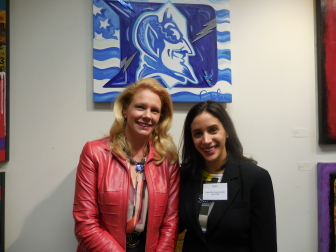 C. Parker Gallery in Greenwich, was the venue for the DukeNY Alumni event on Wednesday night. DukeNY is the local chapter of the Duke Alumni Association for the greater NY area, including parts of New Jersey and Connecticut.

The main attraction of the evening wasn’t one of the Gallery’s vibrant paintings on oversized canvas, but the sweet serenading from Cantor Mia Frame Davidson, Duke 2001, who had songs to sing…and a story to tell.

In between serving as a Cantor for the West Chester Reform Synagogue in Scarsdale, the wife of the Senior Rabbi from NYC’s largest congregation, Temple Emanu-El, and the mother of two young daughters, Cantor Mia was able to squeeze Movie Star onto her resume. 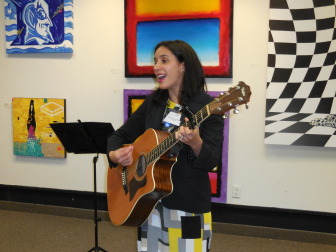 She was ‘discovered’ via cell phone, when she received a call from a Casting Director who needed to cast the part of a female Cantor for a movie being shot in Port Chester.

The cast of the movie, Before I Leave You, which was released in September, included Jane Fonda, Tina Fey, Jason Bateman and Ben Schwartz. Not too shabby cast mates for a newbie to potentially to rub elbows with!

After submitting her credentials, she was chosen from a group of Cantors being considered for the role, and Cantor Mia got the part.

They needed her for three full days of shooting. And before she knew it, she was in the hair and makeup trailer getting primped among the members of the A-List.

“Jane Fonda was sitting next to me, two chairs down was Tina Fey. They both looked at me like who is this new woman?”- Cantor Mia Frame Davidson 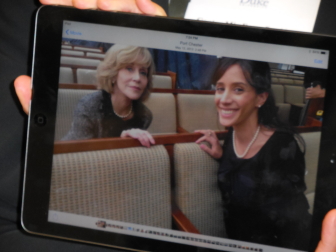 Cantor Mia shares a shot of herself and Jane Fonda from the set of the movie, Before I Leave You.

Of course, playing the role of the Cantor came naturally.  And on Wednesday night at C. Parker Gallery, Cantor Mia picked up her guitar and performed a few songs for her fellow Dukies, including Hinei Mah Tova, a tune she sang in the movie, which is Hebrew for How Wonderful It is We Are All Here In Peace. 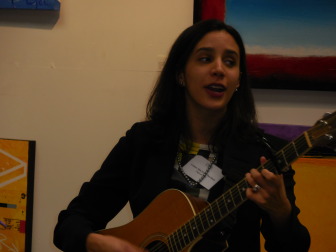 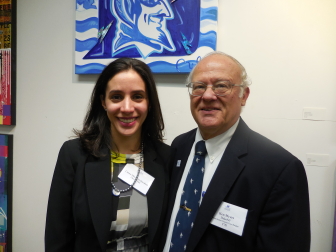 It was a great night for the Dukies who came to mingle and hear one of their own, Cantor Mia, belt out a few tunes. When asked if she was bit by the showbiz bug, Cantor Mia laughed, “I’m a Cantor, not an actor.”

But she sure has a sweet story to share….that harmonizes beautifully with her even sweeter voice.

Are you a Dukie? Learn more about DukeNY online.