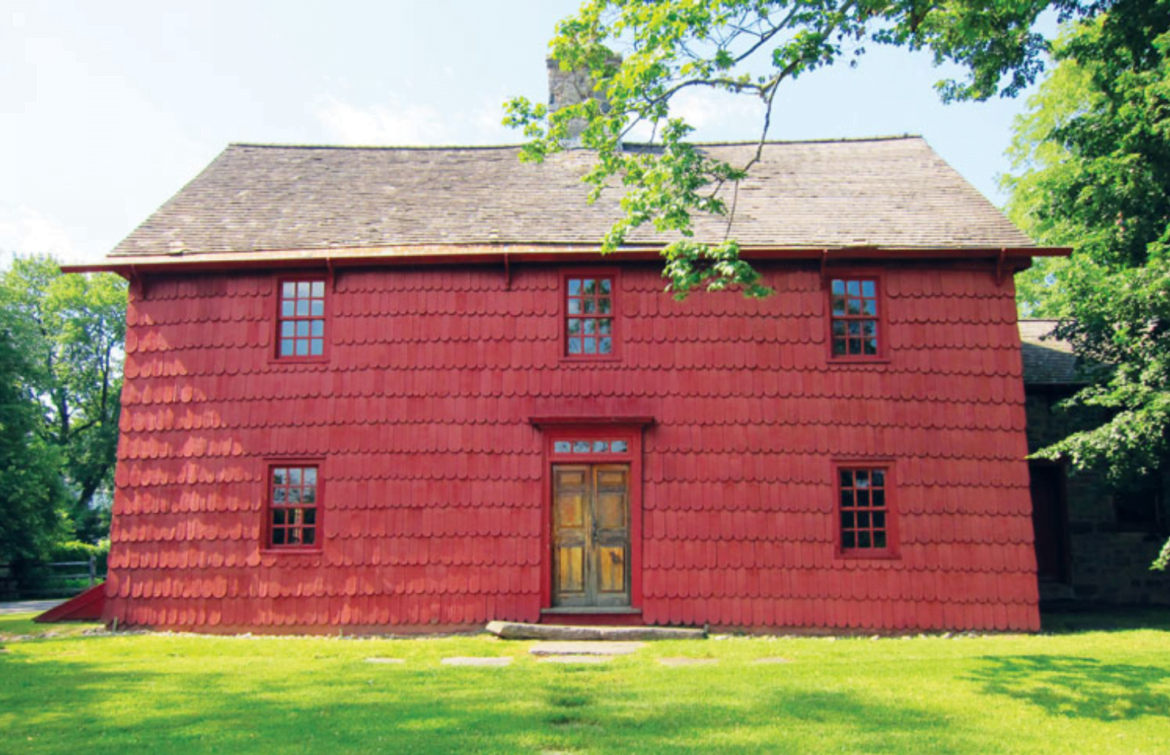 Knapp Tavern – Putnam Cottage will be open to the public for tours on Sunday, May 7 from 2:00-4:00pm, rain or shine. Enjoy the afternoon by stepping back into our town’s colonial history. The Cottage is located at 243 East Putnam Avenue across the street from Christ Church.

These tours are sponsored by the Putnam Hill Chapter, Daughters of the American Revolution. For more information is available here: PutnamHillDAR.org

This bright red house on the Boston Post Road has had a long and colorful history. It was originally built in the 17th century and has grown over the years into its current size and shape. During this time, a number of elements have both been added and removed from the structure. The result is the current building that reflects the changing attitudes of the various owners who have lived and worked there, rather than just those of the original owners and builders. It is not a static object from the 17th century, but a dynamic building that reflects the whole period of its existence.

The house has long been associated with General Israel Putnam and his heroic escape from the British during the Revolutionary War. By the middle of the 19th century, the link was firmly established in the community. The house was opened to the public on the centennial of Putnam’s ride and filled with relics from the colonial era. The house was opened as a museum in 1906 under the name Putnam Cottage. Generations of visitors have come to know the building by this name. In actuality, the name is misleading. Putnam’s association with the building highlights just a brief moment in its history and the term cottage would not have been used to describe such a substantial building in the 17th century.

The original house was probably built for the family of Timothy Knapp in the late 1600s. He and his wife, Martha Weeks, shared it with their son Isaac Knapp, Sr. and his family, including his first two children. Later in the century it was used as a tavern and the meeting place for the local Freemasons. It is intimately connected to the Revolutionary war, having housed General Putnam and hosted General Washington and his entourage for lunch.

In the 19th century, the ceilings were raised, windows were changed and a porch was added to the front of the building. By the end of the century, the house had achieved the size and shape that it would retain through much of the 20th century.

In 1901, a group of concerned citizen purchased Putnam Cottage and in November 1902, the deed was presented to the Israel Putnam House Association, Inc. to maintain as a museum. Putnam Cottage is open to the public as an historical museum, as a learning center for area students, and as a setting for Revolutionary War celebrations that bring a thrill and pride to people of the Town and to visitors from all parts of the United States and abroad.

In preparation for the country’s bicentennial, Putnam Cottage Knapp Tavern underwent an extensive restoration. The purpose of this work was to remove the evidence of 19th century changes that had been made to the house, and to return it to a colonial appearance as well as make it conform to its modern uses.