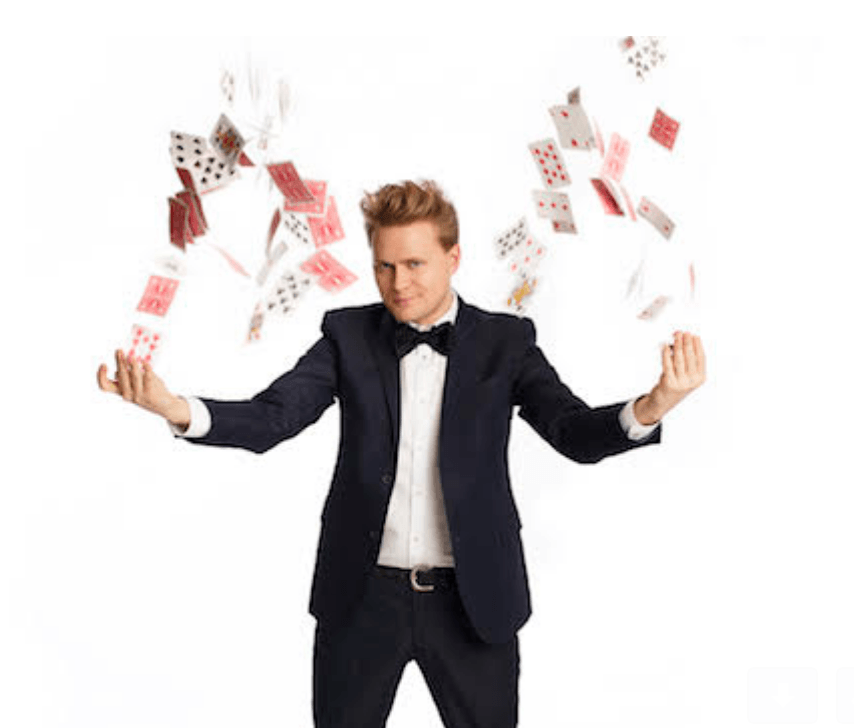 Amazing Max comes to The Palace on January 26 with a high-energy, interactive and all-around silly magic show is appropriate for audiences of all ages.

Leave the iPads at home. Playtime at The Palace, the hit series of live performances geared toward children and families, returns to The Palace Theatre in Stamford on Sunday, January 26. The fun-filled season of magicians, musicians, clowns, puppets and more features six shows to entertain and delight even the youngest theatergoers.

Playtime at The Palace runs select Sundays January through March with performances at 3:00pm. The line-up includes:

January 26 – Amazing Max: This high-energy, interactive and all-around silly magic show is appropriate for audiences of all ages. Max Darwin earned the moniker “The Amazing Max“ for his extraordinary skills as a magician and also for his ability to entertain adult audiences while keeping the little ones spellbound. Max combines magic and comedy, making objects appear and disappear and generally defying the laws of physics inches from theatergoer’s faces.

February 16 – Mr. Fish: Fantastic Forces: Gravity forces are demonstrated and explained in this fast paced and fun show. The law of gravity says, “everything that goes up must come down.” When things start spinning, however, everything changes. Audiences learn how to do many of the circus skills shown in this program, including balancing, rope spinning, magic, and more. Spinning ropes demonstrate centripetal force. The spinning Australian bull roar is a unique musical instrument that demonstrates sound waves. Peacock feathers explain balance. A floating beach ball explains flight. A madcap plate spinning routine makes the audience laughs so much, they will never forget the importance of the center of gravity.

March 1 – Bossy Frog: The Bossy Frog Band thrills young audiences with their interactive, over-the-top, banjo-driven, costume-character-dancing musical performance.Led by certified music therapist and NY State licensed creative arts therapist Jeffrey Friedberg, The Bossy Frog Band is guaranteed to get all the kids (and adults) moving to and singing along with their music. Jeffrey developed the “Bossy Frog” concept in order to inspire children to learn as they learn best – through experiential activities and movement.The Bossy Frog Band includes Jeffrey on lead vocals, banjo and guitar, Alice the hula-hooping fiddler, Joe on bass and costume characters Bossy Frog, Monkey and Crabby.

March 15 – Magic & Beyond: David Garrity uses visual magic and illusions combined with music, pantomime, situation comedy and audience participation to entertain audiences of all ages and backgrounds. Highlights from the “Magic & Beyond” performance may include hilarious stunts of apparent mindreading, an incredible illusion where a table mysteriously floats around the stage and out into the audience, “dangerous” stunts, a beautiful and artistic illusion involving ordinary hula hoops that perform extraordinary magic and a hilarious Houdini-style “Escape Challenge.”

March 29 – Frogtown Mountain Puppeteers: The Legend of the Banana Kid:Little Chucky heads to the Wild West to outwit outlaws in this cowboy adventure. With a fistful of bananas, Chucky rides into town on his trusty goat for a showdown with Big Bad Bart and his gang of bandits. The Legend of the Banana Kid features twenty of Frogtown Mountain Puppeteers’ hand-crafted glove, mouth and rod puppets, and a slew of flying and twirling styrofoam bananas. Please note that there are no guns in the show.

The Palace Theatre is located at 61 Atlantic Street in Stamford, CT. Tickets for all performances may be purchased on palacestamford.org or by calling the box office at 203-325-4466. For the latest news and updates, follow @ThePalaceTheatreStamford on Facebook and @PalaceStamford on Twitter.