Five-time Grammy nominee, CMA Award Winner for New Artist of the Year in 2012 and the People’s Choice Award for Favorite Male Country Artist in 2015, Hunter Hayes is bringing his incredible talent and energy to headline the Dana’s Angels Research Trust Gala Benefit and Concert at the Palace Theatre in Stamford on Saturday, November 11, 2017.

Tickets will be on sale starting September 5, 2017, and available online at palacestamford.org or by calling the Palace Theatre Box Office at 203-325- 4466. Gala tickets are available at dartconcerts.org or danasangles.org.

Hunter Hayes is a singer, songwriter and multi-instrumentalist who roared onto the music scene with his double-Platinum- selling, No. 1 self-titled debut album and chart-topping sophomore album, Storyline.

With three No. 1 singles already under his belt, including the multi-Platinum smash “Wanted,” double-Platinum “I Want Crazy and “Somebody” Heartbreak,” Hayes was one of the first artists to delve into unprecedented territory with the innovative roll out of new music via streaming and digital platforms in 2015, culminating in the release of a special, three-disc collection dubbed The 21 Project.

Beyond his Grammy nominations, CMA and People’s Choice Awards, Hunter has been nominated for a number other awards by the CMAs, Teen Choice, AMAs, CMT and many more. His next album is due out later this year. Hunter Hayes previously played at The Palace Theatre in 2014 in front of a sold out crowd.

DART anticipates that tickets for this year’s concert will sell quickly. For more information visit hunterhayes.com or follow on twitter @HunterHayes.

This is DART’s fifteenth year as a non-profit focused on Niemann-Pick type C disease research.

Throughout the years, DART has been blessed to have the support of incredible performers for its cause, such as Martina McBride, Gladys Knight, Kenny Loggins, The Beach Boys, Frankie Valli, Natalie Cole, Smokey Robinson, America, Richard Dreyfuss and Rob Mathes, who have all performed at the DART Gala Benefits. Past supporters and attendees at DART’s annual fundraisers include Kathie Lee and Frank Gifford, Joy and Regis Philbin, Cheryl and Ron Howard, Martin Scorsese, Sonny Grosso, Phil Ramone, Richard LaGravenese, Florence Henderson, Chynna Phillips and Billy Baldwin.

The DART Gala will kick off with an elegant cocktail reception, featuring a Rao’s pasta bar, with silent and live auctions. Gala Reception/Concert tickets start at $350 and will be available by invitation and online at www.DanasAngels.org. Concert-only tickets start at $40 and are available to the public through the Stamford Center for the Arts Box Office at www.PalaceStamford.org or by calling 203-325- 4466.

“DART is so excited to be bringing another Country Music Superstar to Stamford this year and thrilled to have such an amazing musical talent as Hunter Hayes,” said Phil and Andrea Marella, founders of Dana’s Angels Research Trust. “He is young, fun and full of energy – exactly what we need to get the audience on their feet and have a great night supporting DART.”

This year’s honorary co-chairs are again award-winning singer/song writer Kenny Loggins and Michelle Phillips of The Mamas and The Papas fame. 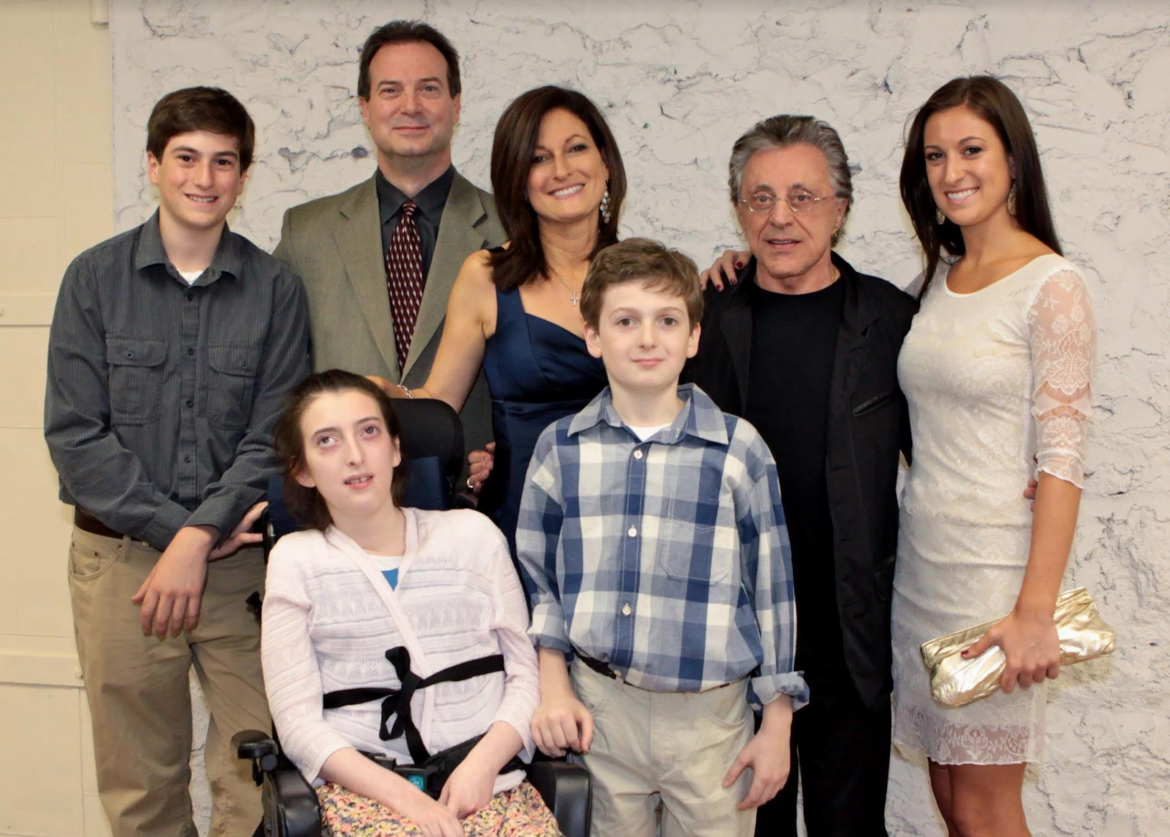 Frankie Valli with the Marella family, Dana and Andrew (front) and Philip, Phil, Andrea and Julia back. Contributed photo

Two of the Marella’s four children, Dana and Andrew, were/are afflicted with NPC. Most children who suffer from NPC die in their early teens, but DART has helped change that fate.

As an all-volunteer organization, over 95 percent of the funds expended are channeled directly into supporting pivotal NPC research; research that may also help millions of people suffering from HIV/Aids, Ebola, heart disease, stroke, Alzheimer’s disease and other disorders that appear to be related to cholesterol.

When Dana died, she was confined to a wheelchair, no longer talked, suffered from frequent pneumonia and required constant care, but she always had a smile on her face and was an inspiration to many, both here and around the world. The Marella’s youngest child, Andrew, now 18, is battling seizures and has walking and swallowing issues.

However, Andrew has benefited from two experimental medications and has participated in the latest drug trial for almost four years, first conducted by the NIH and now managed by Sucampo Pharmaceuticals, Inc.; all due in large part to DART’s efforts.

To date, DART has raised almost $4.25 million toward the search for a cure for NPC. DART is particularly proud of its commitment as a founding member of a unique, collaborative drug development program called SOAR-NPC or Support Of Accelerated Research. Working with other NPC families and research institutions, SOAR’s collaborators have four clinical trials already to their credit.