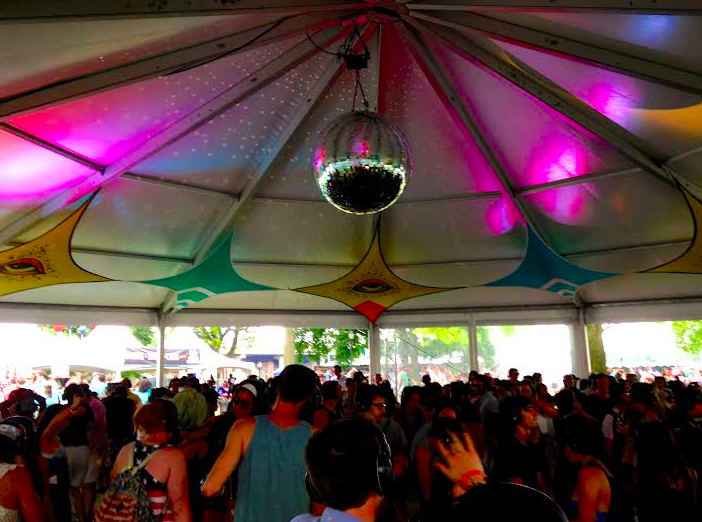 I attended GovBallNYC last year, and it was one of the most unforgettable and overwhelming experiences of my life. They really do a good job of making sure you’re constantly entertained there. There are tons of food trucks, photo booths, pieces of art, and funky people all over the island that make the festival a bit of a sensory-overload.

You look around and it goes: Jalapeño Corndog Stand, poster of a giant Gummy Bear’s mugshot, two grown men walking around in Mario and Luigi costumes, and then a huge tent with strobe lights and beach balls bouncing over the crowd. This year, I wasn’t sure if I was ready to take on something so stimulating for three days straight, so I bought a one-day ticket for Sunday.

Sunday night headliners were Vampire Weekend, one of my favorite bands (all four of its members from Columbia University), and Axwell ^ Ingrosso (two of the members from Swedish House Mafia, which split in 2013).

The crowds at both acts seemed equally packed, and I bet many people in the audiences felt that they got their money’s worth. Ezra Koenig, of Vampire Weekend, even threw two-dollar bills into the crowd and ended with, “Those are $2 bills for good luck, New York. Good night.”

Throughout the entire day, though, festival-goers could hop from stage to stage and tent to tent, listening to a huge variety of different solo singers, bands, and DJs. Some people could mouth all the words and some were there simply to discover. There wasn’t a single minute of silence throughout Randall’s Island. Gigs overlapped constantly, driving people to rush from one side of the island to another over and over throughout the day.

One of the most amusing attractions on the island was the Silent Disco, where upon entry everyone was given huge, chunky, wireless headphones all hooked up to the same DJ. Everyone would dance while the DJ, stationed at the front of the tent, would occasionally say words of encouragement into his microphone. The crowd would usually respond with a huge cheer and go on to keep dancing under the disco ball in the center. It makes it all worth it, however, when you take off your headphones and watch everybody else dancing to complete silence and WOO-ing at the top of their lungs at random intervals and for no reason at all.

The Governors Ball music festival isn’t just for listening to new artists; it’s for eating weird but satisfying foods, lying on grass and being close to your friends, and definitely people watching. Governors Ball isn’t an out-of-control and pushy music festival. There aren’t mosh pits or crazy drugs. Instead, it’s three days on an island full of generally nice and calm people all looking to have a good time. I saw strangers reaching out to one another to help take pictures, make sure other people can see, and even help others to the Emergency HQ if somebody was feeling sick.

One stranger even offered my friends and I his extra VIP bracelets to use since he was leaving the concert early. I loved the atmosphere of the festival and I think that is one of the best features of the event. This is definitely a venue to go to for the shy, the timid, the quiet, or the one who isn’t a classic “party-girl” or “party-guy.”

It’s so rewarding coming home and not feeling entirely drained, and I felt so safe and happy the whole time. It really did feel like everybody else on Randall’s Island was my distant friend and as though they were all looking out for me too. After all, festival-goers were asked to bring a positive attitude to the concert.