With the recent whale sightings in and near Greenwich, here’s a chance to learn more about whales in a hands-on setting!

Celebrate the second summer of humpback whales visiting Long Island Sound by by visiting the “Giant Walk-In Whale” at the Maritime Aquarium in Norwalk.

Wile you’re there you can enjoy a spectacular IMAX whale movie.

With the recent sightings of two whales in western Long Island Sound, the Aquarium is declaring August to be a “Whale of a Month.” Daily highlights from Aug. 6 through Labor Day include:

– a 43-foot inflatable humpback whale that will let Aquarium guests experience the scale of a whale, both inside and out.

– the special exhibit “Animals Without Passports,” which explains the challenges of humpback whales’ annual 3,000-mile migration.

– and the #WhalesForACause fundraiser, a new partnership between the Aquarium and Vineyard Vines that kicks off on Fri., Aug. 5 with special discounts in participating Vineyard Vines stores.

Here are the details:

Even during a whale-watch cruise, it’s hard to appreciate the size of mostly submerged whales. So the Aquarium’s 43 ft  “Giant Walk-in Whale” lets guests pose beside – and go inside – a life-size inflatable humpback whale.

“Guests can stand next to the whale to get a real sense of the creature’s size,” said Tom Frankie, the Aquarium’s exhibits manager. “Have your phone ready too, because it’s a great ‘selfie’ – you and a whale!”

Aquarium guests can even play Jonah and go inside the whale to see its lungs, heart, tongue and stomachs. (Most baleen whales have three stomach compartments.)

Adjacent to the “Giant Walk-In Whale,” Aquarium guests can stop by a whale activity station to learn how blubber insulates whales from the cold waters of the North Atlantic and to touch real baleen and other whale artifacts. (This station – and an activity station about butterflies tied to the Aquarium’s “Flutter Zone” exhibit – will be offered on alternating days. Check the Aquarium website to see which station is offered on the day of your visit: www.maritimeaquarium.org.)

After stepping inside the “Giant Walk-In Whale,” thrill to seeing the gentle ocean giants even larger than life – and in their water environment – on the Aquarium’s six-story screen. Better than any whale watch you’ve ever been on, the IMAX movie lets audiences join scientists studying how these ocean giants communicate, sing, play, feed and care for their young.

This special exhibit lets guests learn the challenges of humpback whales’ annual 3,000-mile migration between their summer feeding grounds in New England and their winter breeding grounds in the Caribbean. Discover when and why the whales migrate, and explore the hazards that humpbacks face as they cross ocean borders, including poisoning from pollution, becoming entangled in fishing gear and being hit by boats and ships.

“Animals Without Passports” tells its story by focusing on one whale, a female humpback named Salt who has been studied by researchers for 40 years. Trace Salt’s “family tree” as you learn how scientists identify and track individual whales.

• Vineyard Vines Whales for a Cause fund-raising effort

An exciting new partnership with Vineyard Vines lets you support the Aquarium in two ways:

– on Fri., Aug. 5 between 2:00 & 6:00 pm, participating Vineyard Vines stores in Greenwich, New Canaan, Westport, Grand Central Station, on 3rd Avenue, and in Short Hills, N.J., will give you 10 % off your entire purchase, while also donating 10 percent of all money raised during those four hours to The Maritime Aquarium. 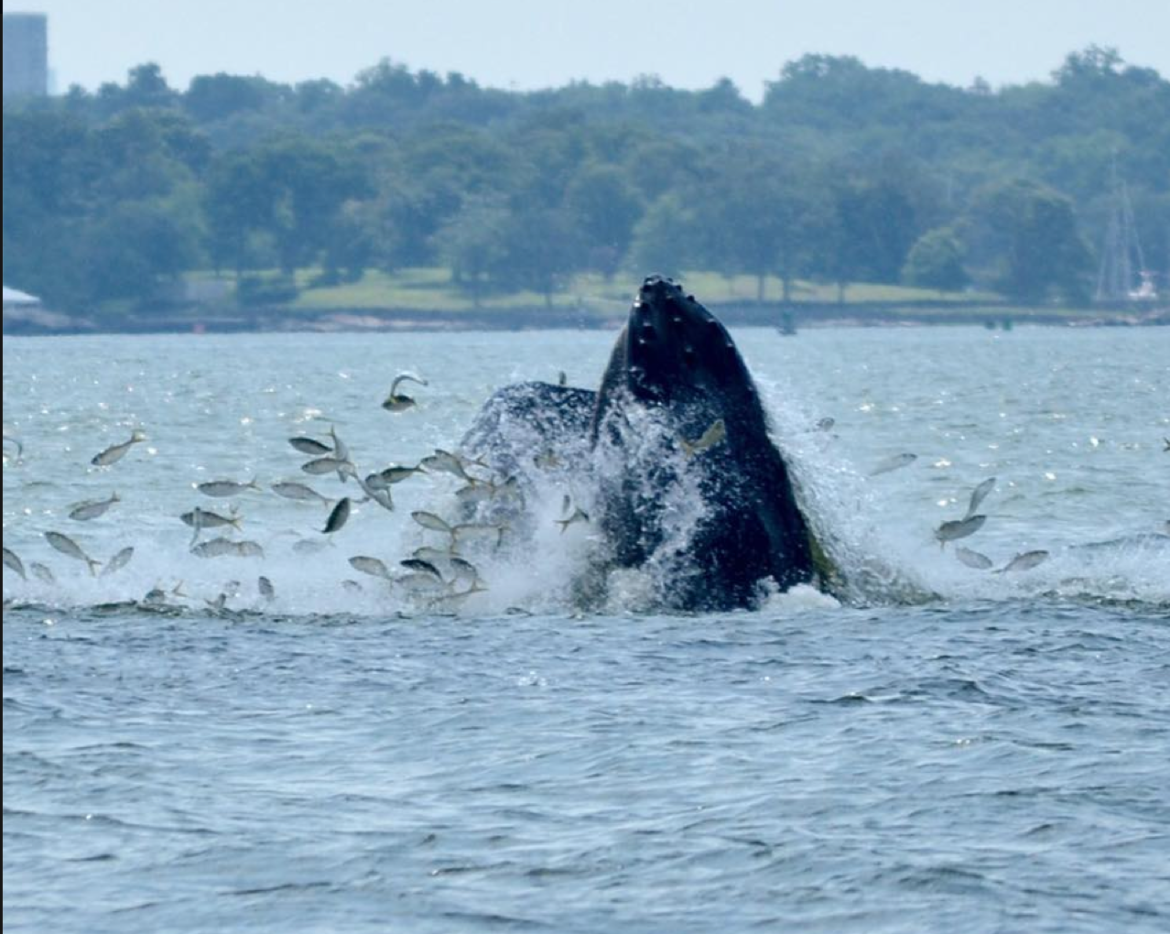 – now through Sept. 16, pick up a #WhalesForACause coloring page at The Maritime Aquarium or at participating Vineyard Vines stores, or download one from www.maritimeaquarium.org. Color it in, cut it out and share it on Instagram, Facebook and Twitter with the hashtag #WhalesForACause and the tag @VineyardVines. For each user who posts a whale, Vineyard Vines will donate $1 to The Maritime Aquarium.

The Maritime Aquarium’s special “Whale of a Month” offerings celebrate the recent sightings of two humpback whales in western Long Island Sound. This, after three whales spent several months in the Sound last summer – the first time in anyone’s memory that humpbacks not only visited the Sound but came so far into the Sound; as far west as Mamaroneck, N.Y.

For more information about The Maritime Aquarium’s exhibits, programs and IMAX movies, go to www.maritimeaquarium.org.

The Maritime Aquarium at Norwalk is a 501(c)(3) not-for-profit institution whose mission is to inspire people of all ages to appreciate and protect the Long Island Sound ecosystem and the global environment through living exhibits, marine science and environmental education.

The Maritime Aquarium receives support from the State of Connecticut DECD’s Offices of Culture and Tourism.

Whales Have Returned to Western Long Island Sound: What to Do If You See One