Longtime Byram resident Vicky Camacho approaches every task with gusto. Her hobbies abound. Her hats are many.

Local businesses know her as Byram’s unofficial ambassador, ever talking up local the businesses of Delavan Ave and Mill Street.

On a recent drive through Byram, Camacho plays tour guide from the passenger seat. “Oh that’s Fred’s Bait and Tackle,” she says, heading east on Water Street. “And look, we have a new tattoo parlor. Super nice guys!” she exclaims.

“Famous Greek Kitchen did a nice renovation. Oh, the Mousaka!” Camacho gushes at the intersection of Mill Street and North Water St. “More people need to get over to Byram,” she exclaims on the way past Executive Corner Delion the way to I-95. “They make the best sandwiches. Delicious. And Kevin’s so nice.”

Camacho’s concern for the success of her neighborhood’s businesses is paralleled by her empathy for animals and children. It took several visits to Animal Control and a letter from her landlord before she became owner of an abandoned pit bull named Red. “I don’t think they wanted to give her to me,” Camacho recalled of the day she met a discarded brindle dog four years ago. 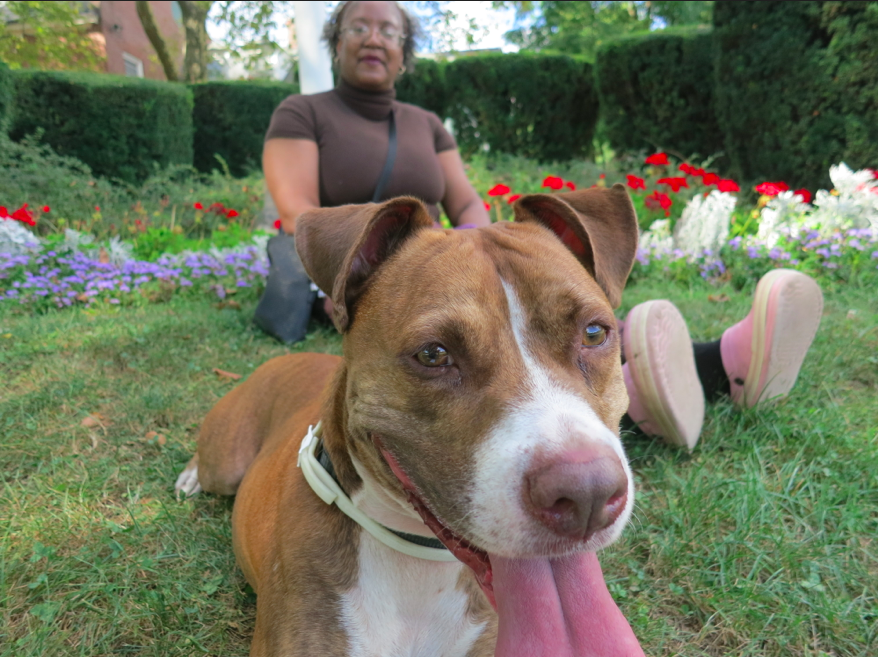 “A stranger in the park said to me, ‘You know that kind of dog has all kinds of issues,’ and I said, ‘You know, so do I,'” Camacho said of the dog she re-named Shaqueeta.

Her persistence paid off, but there was much work ahead. After being abandoned and then spending nearly a year at Greenwich Animal Control, the dog had issues to work through.”You’re getting an animal out of a cage when you go to animal control,” said Camacho, who was fully aware the dog would be a challenge.

“This dog was not socialized when she was younger. You have to realize you’re both going to have to do rehabilitation. You are helping them to be free. You have to teach them boundaries and limitations.”

Public Access “Neighbors”
But to get Camacho going on the subject of chess and her cable access program “Neighbors,” it would seem that chess is the cure-all for society’s ills. Maybe it is.

Camacho will tell you that chess teaches impulse control, delayed gratification,  and even prevents bullying. If she had her druthers, every child would learn to play chess at a young age.

It was Camacho’s obsession with chess that gave birth to the public access program she produces called “Neighbors.”

“We teach the basics of the game through music, movement and song, and we sometimes address social issues like gang violence and bullying,”Camacho said. “This is our fifth season.”

On Friday Camacho celebrated the fifth anniversary of “Neighbors” by collecting live testimonials from friends and colleagues.

Camacho was joined by her cameraman D. Troy Shipp in the lower level of Greenwich Library where Elton of Elton’s Café accommodated the filming.

Among the friends and supporters, some having volunteered in their free time to lend a hand or advise, included Anita Lai of Community Answers, Rick Langeloh, library technical assistant, who congratulated Camacho on five years of “Neighbors.” Others who passed through included Cathryn Tynes and John Yoke who both do IT at the library. Carl White, Local Historian and Geneology Librarian, recorded his testimonial in one take.

Neighbors is on public access channel 88 on Wednesdays at 6:00 pm and Sundays at 12:00 midnight. The program is also on  phillyCAM.org, On Demand just type in neighbors. http://gctv.greenwich.org Fridays at 6:30pm and 7:00pm on Channel 79 on Cablevision.