By By Victoria Hart Glavin of Tiny New York Kitchen

This Valentine’s Day cozy up with a bowl of rich French onion soup and cheesy dunkers. 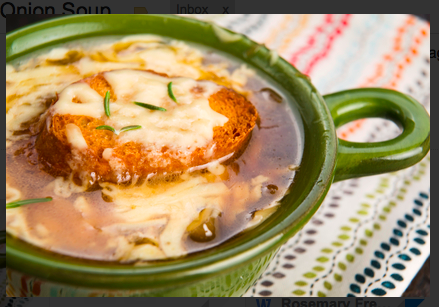 Open a resealable plastic bag and add onions, flour, 1 tablespoon rosemary, kosher salt and pepper. Seal bag and shake to coat. In a large-size saucepan melt 4 tablespoons of the butter over a medium-low heat. Stir in onion mixture. Cover and cook for 20 minutes. Stir occasionally. Uncover, increase heat to a medium-high. Cook for 3 more minutes until onions are golden brown. Stir in beef broth and balsamic vinegar. Bring to a boil. Reduce heat and simmer, covered for 10 minutes. Stir occasionally.

Meanwhile make the grilled cheese sticks. Spread bread slices with remaining butter. Sprinkle cheese on the unbuttered sides of 4 slices. Top with remaining bread slices, buttered sides up. Heat a grill pan over a medium heat. Add sandwiches. Sprinkle each with 1/4 teaspoon of the remaining rosemary. Grill 2 to 3 minutes each side or until golden brown. Cut sandwiches into thirds. Serve with soup. Serves 4

Currently, Victoria creates tasty treats in her tiny kitchen, in New York City, for all to enjoy and on weekends she explores Fairfield County where has a second home. Victoria has shared her recipes with others and now you can enjoy the Tiny New York Kitchen recipe collection, too! Victoria is a member of the Association for the Study of Food and Society.