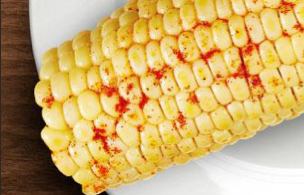 August equals corn in my book. Growing up in Nebraska I think we had corn on the cob every night in August.

In a small-size bowl melt butter. Mix in chili powder. Brush on corn. Serve hot and enjoy every bite.