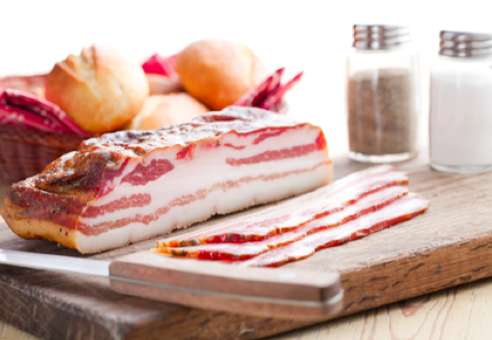 Bacon is prepared from several different cuts of meat. It is usually made from side and back cuts of pork, except in the United Sates, where it is almost always prepared from pork belly. The side cut has more meat and less fat than the belly. Bacon may be prepared from either of two distinct back cuts: fatback, which is almost pure fat, or pork loin, which is very lean. Bacon cured pork loin is known as back bacon. 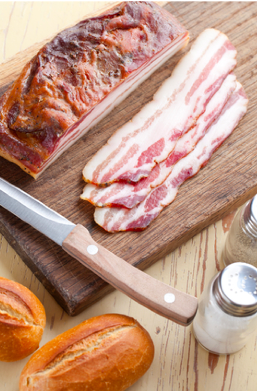 I like bacon that is thick and crispy, not thin and limp. I favor a 1/8-inch sliced bacon that is apple wood smoked for a full, sweet flavor that seems to complement, not overpower, other foods.  You can buy this at a butcher’s shop where they will slice it for you from the slab. Many supermarkets now carry thick-sliced bacon.

To make bacon without the stovetop splatter, I bake it in a 350 degree oven. Place bacon strips in a single layer in a large baking pan with at least one inch deep sides and bake for 25 to 30 minutes. Remove from oven and using tongs, transfer bacon strips to paper towels to drain excess fat.

“Work With What You Got!”