UPDATE Tuesday, April 3, 10:30am: This story has been updated with details on the school bus that slid off the road on Monday morning.

Original story, April 2, 7:20pm: About six inches of snow fell in Greenwich on Monday morning, making for a slippery start to the day for commuters, school buses and parents driving children to school.

Greenwich Schools opened on schedule, a decision made by the superintendent, Dr. Jill Gildea around 4:30am, according to an email she sent to parents at 1:30pm.

Dr. Gildea said accumulation of heavy and wet snow fell more quickly than anticipated, but that the decision on whether to delay or close school is often made before snow actually starts to fall.

“Ultimately, the decision to open or close schools, on a given day is mine to make, and today, I concur, we would have benefited from a delayed opening,” she wrote, adding that at 4:30 Monday morning, the roads were clear and the forecasts and Town departments advised that the roads would be warm enough to melt the snow and that most accumulation would occur on non-paved surfaces.

At the Monday morning police press briefing, Lt John Slusarz said Greenwich Police received 20 calls for motor vehicle crashes and disabled vehicles as a result of the slippery conditions between 5:45am and 10:30am.

On a widely shared GFP Facebook post around 7:00am saying there was no delay to the start of the school day, parents voiced their anger at the decision in dozens of comments about the roads not being plowed and treacherous conditions.

Many reported deciding to keep their children home from school rather than risk the drive.

Many posted photos of unplowed roads, and several reported having accidents or witnessing crashes.

The school district’s communications director Kim Eves said in an email that one school bus slid off the road while en route while it was carrying one student. No injuries were reported.  “In order to move the bus, it was towed out of the snowdrift. Police responded to the scene. Transportation was deployed to bring the student to school and parents were notified,” Eves said.

On a second widely shared GFP Facebook posts around 8:15am reporting that the Fire Dept’s warning that there was 4-5″ of snow on town roads,  very poor driving conditions, and multiple accidents. “Avoid driving if possible,” readers reacted immediately.

One parent replied, “Which is why my children won’t be going to school. Unbelievable the day was not called. Not even a delay.”

Another parent, Lindy Urso, commented, “Todays horrible ‘no delay’ was the culmination of other previous unnecessary delays — no matter the school day numbers and other concerns, the ONLY thing that matters is student safety. I drove my kids today in 4-Wheel Drive and conditions were horrendous. I am aware that at least one school bus was in an accident. There is NO EXCUSE for no delay today.” 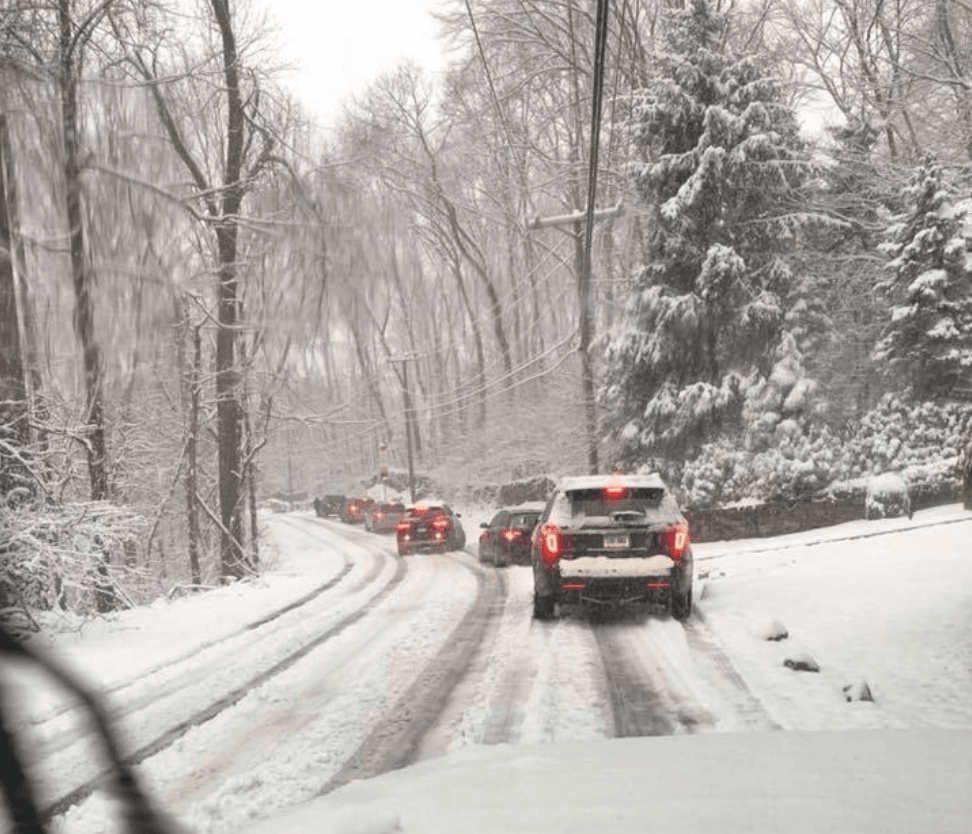 On the GFP Facebook page, a reader posted photo of  Lower Cross Road unplowed en route to Parkway School, which starts at 8:45am.

Another reader posted, “This is ridiculous I try to go out and bring my wife to work and one of those little streets one of the town trucks plows hit my mirror. I stop and he keep driving now schools expecting to bring kids to school on time with this snow …. what kind a district is this???”

Another readers shared that, “Terrible call! My daughter got stuck and her co worker got into an accident and her car is totaled!”

Yet another wrote, “The roads are absolutely treacherous on ANY untreated road. I had no problem driving in any storms this winter until today. Almost spun out twice. Can’t imagine the buses in this weather. Keeping my daughter home because we go to school across town. Do NOT drive if you don’t have to!”

Last week the BOE announced that as of March 22, Greenwich Public Schools had been closed for five days due to weather related conditions (January 4, 5, March 7, 8, 21), and that the last day of school would be Thursday, June 21 (except for Old Greenwich School). 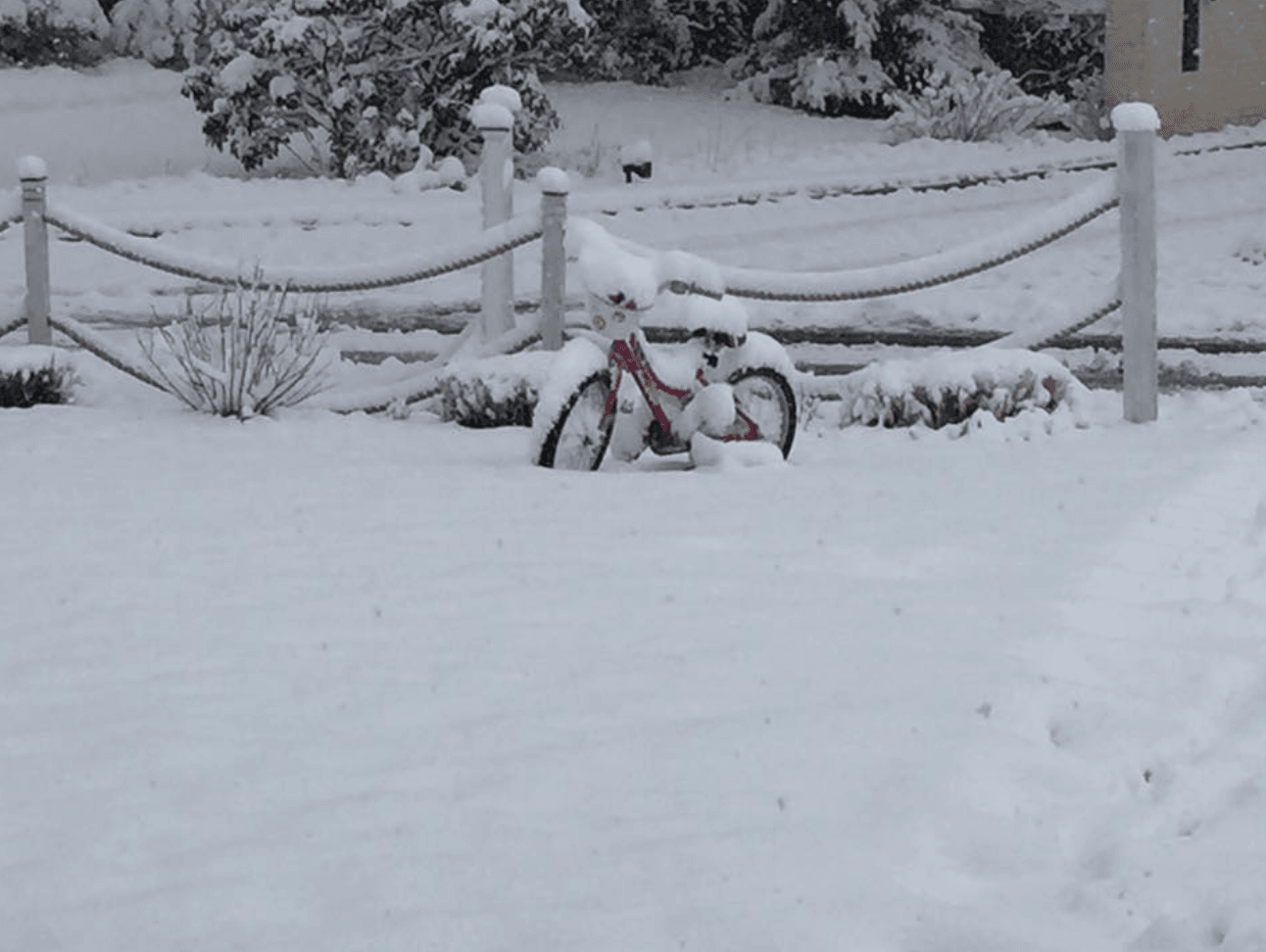 A reader from Byram regretted leaving the bikes out overnight. Photo shared on GFP Facebook 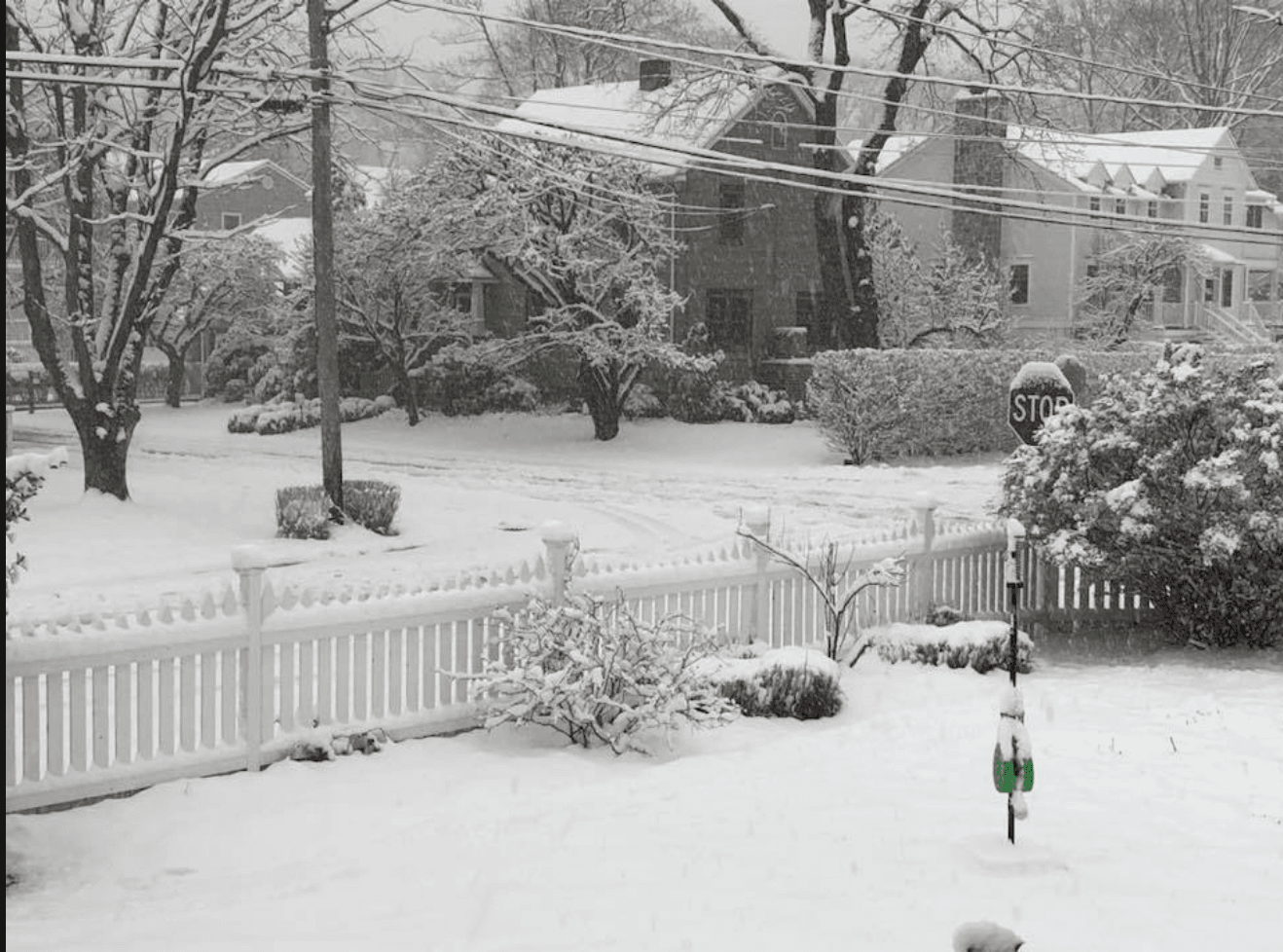