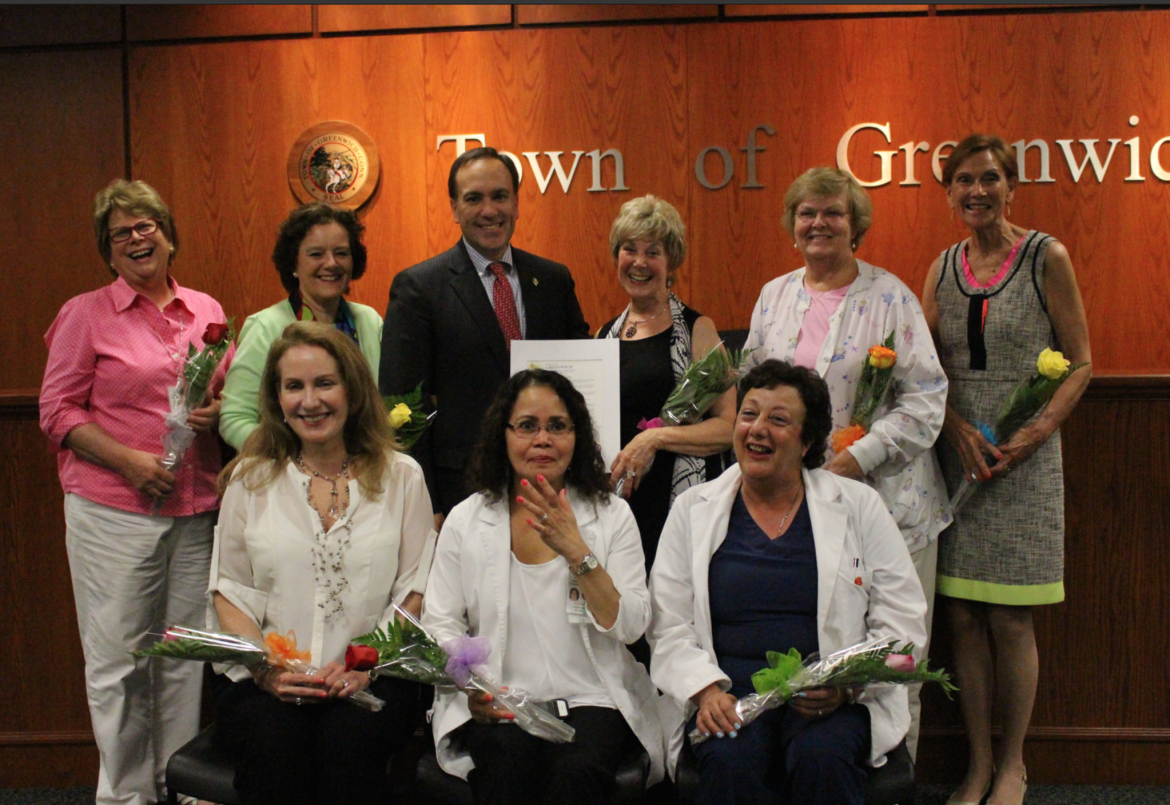 Tuesday is the last day of National Nurses Week and therefore the last chance to hug a nurse during their official week of recognition. On Tuesday morning, Greenwich First Selectman Peter Tesei presented a proclamation and mentioned that his wife is a APRN, which stands for Advanced Practice Registered Nurse.

“She reminds me regularly of the role nurses provide,” Mr. Tesei said. “Nurses are on the front line in care.”

Stephanie Paulmeno, MS, RN, NHA, CDP, CCM, who organized the event in her role as an Executive Board Member of the CT Nurses’ Association, said that many nurses are opening private practices and can practice independently as a result of the Affordable Care Act. She said that in satisfaction surveys, people indicate they are as pleased with the care from practices run by a nurse as they are with those run by physicians. 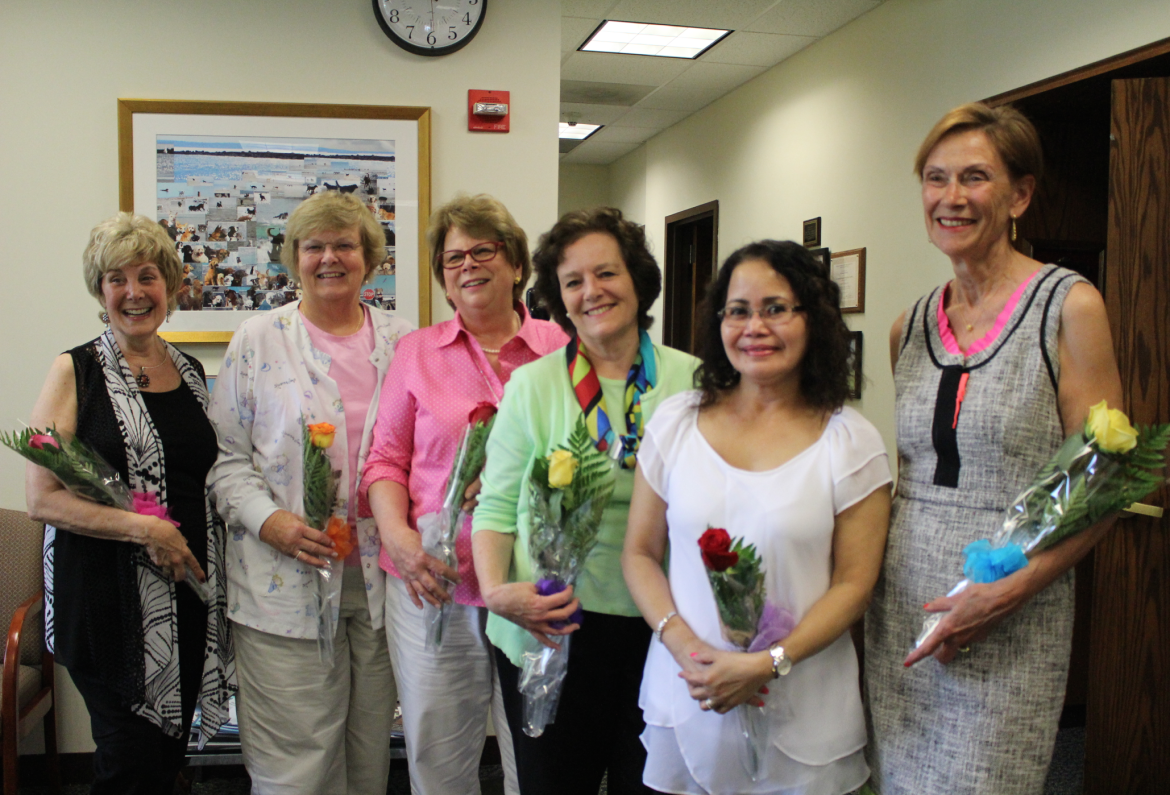 Carol Kellogg, a Registered Nurse at The Nathaniel Witherell, recalled the time when she was helping at a Town Hall flu shot clinic and dressed up as Crackles the Clown, red nose and all.

“I entertained the kids,” Kellogg said, adding that the clown costume was a good distraction from their fear of the shots.

Deb Travers, an APRN who is a public health nurse and family health practitioner with the Town for 30 years said, “We all know the job and tend not to talk about ourselves,” but nurses are dedicated 24/7 to their work. “I remember a nurse who used cross country skis to get to Town Hall for work during a snow storm,” Travers said. “Better than the mailman!”

Travers also remembered the time when she got permission during the H1N1 flu outbreak in 2009 for a clinic without appointments in advance.

“I had my cart of vaccines and came down on the elevator,” she said. “And when the doors opened, there was  sea of people in the lobby. They were lined all the way up and down the halls.” She said that despite the huge turnout, everyone was in and out of Town Hall in 30 minutes. “We got thank you notes,” she said. “It was orderly and efficient.”

Some of the nurses who attended the proclamation on tuesday were Stephanie Paulmeno, Nancy Tar who has been a nurse at The Mews for 15 years, Carol Kellogg who has been at the Witherell for many years, Deb Travers who has worked in the Town Health department for 30 years, Barbara Bonfiglio who is the newly appointed director of nursing at Greenwich Woods, Gloria Mackey who has worked at the Witherell for 17 years and Carol Burns who is the Executive Director of River House Adult Day Center in Cos Cob.

After Mrs. Paulmeno distributed flowers to all the nurses, the group moved form the Selectmen’s office to the meeting room, where Mr. Tesei read a proclamation as follows:

Whereas, Nearly 3.1 million registered nurses in the United States comprise our nation’s largest health care profession, with 1 in 59 people in Connecticut being a nurse, and

Whereas, The depth and breadth of the registered nursing profession meets the different and emerging health care needs of the diverse American population in a wide range of settings, and

Whereas, The American Nurses Association, as the voice for the registered nurses of this country, is working to chart a new course for a healthy nation that relies on increasing delivery of primary and preventive health care, and

Whereas, A renewed emphasis on primary and preventive health care will require better utilization of all of our nation’s registered nursing resources, and

Whereas, Professional nursing has been demonstrated to be an indispensable component in the safety and quality of care of hospitalized patients, and

Whereas, The demand for registered nursing services will be greater than ever because of the aging of the American population, the continuing expansion of life-sustaining technologies and the explosive growth of home health care services, and

Whereas, More qualified registered nurses will be needed in the future to meet the increasingly complex needs of health care consumers in this community, and

Whereas, The cost-effective, safe, quality health care services provided by registered nurses will be an increasingly important component of the U.S. health care delivery system in the future, and

Whereas, Along with the American Nurses Association, the Connecticut Nurses’ Association has declared the week of May 6-12 as National Nurses Week with the theme – “Ethical Practice. Quality Care.” in celebration of the ways in which registered nurses strive to provide safe and high quality patient care and map out the way to improve our health care system, therefore be it

Resolved, That I, Peter J. Tesei, 1st Selectman of the Town of Greenwich, CT ask that all residents of this state/community join me in honoring the registered nurses who care for all of us, and be it further

Resolved, That the residents of Greenwich, CT recognize registered nursing’s accomplishments and efforts to improve our health care system and show appreciation for the nation’s registered nurses not just during this week, but throughout the year.