The Board of Education announced in a press release Thursday morning that New Lebanon School’s (NLS) Kindergarten will be held at the Byram Archibald Neighborhood Center (BANC) for at least the 2014-2015 school year.

Kindergarteners will start the school day at BANC for their academic classes. Then they will take a school bus to New Lebanon for the second half of the day. That means they’ll be at New Leb for lunch, recess and specials including FLES, art, music, physical education, and media.

This solution ensures  that current students in grades K-4 will “maintain their elementary school experience” at the New Lebanon School facility according to the BOE press release.

The solution frees up 3 classrooms to address the projected enrollment increases and “creates a safe and appropriate learning environment for our incoming Kindergarten students.”

New Lebanon School is projected to continue this increasing trend through at least 2015-2016, at which point it is expected to stabilize. Based on expected enrollment of 276 students for the next school year, three classes of Kindergarten will be
held at BANC in 2014-2015. This will provide adequate space for the 12 sections projected for grades 1-5 at New Leb in 2014-2015, leaving two classrooms available for instruction in the Advanced Learning Program (ALP), Special Education (SpEd), English Language Learning (ELL), and Reading.

According to the press release, the District picked the option of using BANC for 3 classrooms from many options.

SHORT AND LONG TERM NEW LEBANON SCHOOL FACILITY PLANS
A number of steps have been taken to address the facility utilization needs for NLS in both the short and long  term:
2013-2014 School Year:
– The K-5 enrollment this year filled all 14 available classrooms at NLS. Based on class size guidelines, enrollment in two grades — 1st and 3rd – warranted two additional sections. As a short-term solution, two instructional aides were provided at each grade level to create more favorable ratios of teachers to students.
– The Board of Education approved a Pre-Feasibility Study ($25,000), which is nearly completed, and will be presented in March 2014. This study will provide a square footage analysis as well as offer local and state benchmarks for high quality school facilities.
– The Board of Education approved $100,000 in the 2014-2015 Capital Plan for a Feasibility Study to be conducted in the Summer of 2014. This study will provide a deeper facility analysis and begin to develop options for addressing facility needs.
– District administration developed a short-term solution– Kindergarten at BANC– to address 2014-2015 facility needs.
2014-2015 School Year:
– Kindergarten students are located BANC, freeing up three classrooms at NLS
– Feasibility study will be conducted for long-term building project
– Pending Board of Education approval, the District will implement viable solutions to meet facility needs for 2015-2016.

2014-2015 NEW LEBANON SCHOOL KINDERGARTEN AT BANC
District and school administration have worked together to create a safe and appropriate educational setting for NLS Kindergarteners in the 2014-2015 school year. The following information provides an overview of a number of considerations and solutions that have been developed for implementing this plan. It is not intended to be an  exhaustive list. 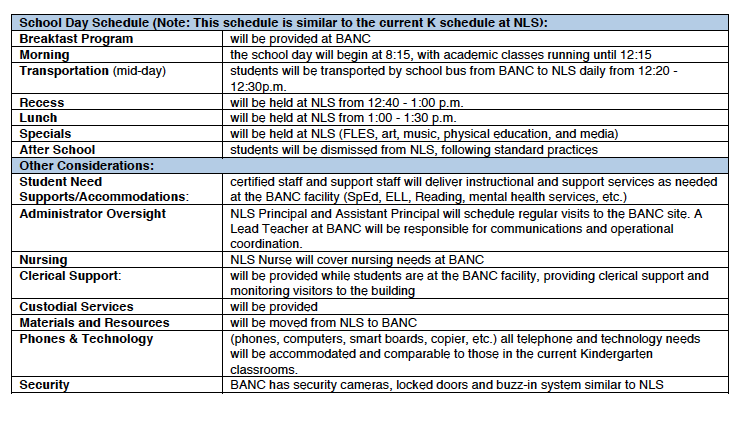 “The Byram Archibald Neighborhood Center (BANC) is a community resource that serves Byram and the western section of Greenwich. Its purpose is to provide a safe and structured environment to the young people of Greenwich. Through its various programs, including after-school, summer camps and sports teams, BANC offers a safe haven to do homework, learn social skills and be part of a team.

The BANC center was donated to the Byram community in 1977 by Marie Athlie Archibald. Built in 1920, the center has served as a candy factory and a Masonic temple until being renovated in 1981 into its current neighborhood center form. Several renovations have taken place since and the BANC center is a real community center that serves hundreds of local children.”