Each of the three lines from Southern Connecticut Synchronized Skating (SCSS) team won a medal at the Colonial Classic Competition held this past weekend at the Tsongas Center at UMass, in Lowell, Massachusetts. The three-day event hosted 146 Northeastern U.S. teams that competed across every division from Beginner to Senior.

The Shadows, an Open Juvenile line, won Gold and bested nine teams with their flawless performance to “Why Don’t You Do Right?” by Sinead O’Connor. Kalaudia Auz, one of the line’s 11 skaters and a senior at Norwalk’s Brien McMahon High School said, “It was the best we skated this season – knowing we won 1st makes all our hard work worth it.” Skater Emily Merole, a resident from Stamford said, “The great atmosphere in the Tsongas Center really helped us get into it – we just put it all out there today.” 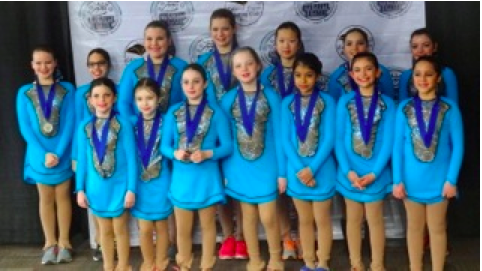 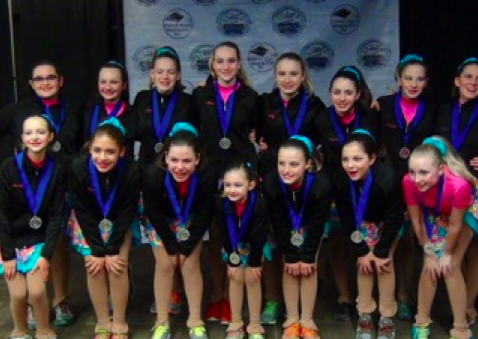 Pitted against 10 very competitive teams, the Shimmers (Open Juvenile) won Silver with their performance to “Cruisin’ for a Brusin” theme song from Teen Beach Movie. The Silver medal is a particularly sweet win as they competed against four of the same teams at last month’s Terry Connor’s Synchronized Skating Open in Stamford, CT, where three teams tied for third, placing the Shimmers in a disappointing fifth place. Rachel Iannazzo, a 7th grader at All Saints Catholic School, Norwalk, said, “When we were done, I felt like it was the best skate we’ve had. We all worked together and it really showed. It was a great feeling when we heard we came in 2nd!” Olivia Linnartz, a New Canaan resident and freshman at the Holy Child, White Plains, credits the importance of teamwork and working together, “Our entire team of 15 felt amazing about our skate. The Shimmers are a second family to me and we have each other’s back no matter what. We love to spend time together off the ice as well.”

The Sprites (Beginner 2) continue their season wins with a 4th place Pewter medal for their performance to “Stray Cat Strut” by The Stray Cats. With this flight of four teams, Precisely Right of Morris NJ, and CNY Chill of Central NY had a tie breaker with them winning 1st and 2nd respectively. Team Winterettes of Rockland, MA, secured 3rd place.

“This was a great weekend for our teams. I am so proud of their power, passion and teamwork,” said Kathleen Malone, mother of Shimmer skater Isabela Malone and President of the Southern Connecticut Synchronized Skating Parent Organization.