Nothing says summer is in her last act like the GHS Cardinal Quarterback Club hosting the new season’s annual Kickoff event.

On Tuesday night that’s exactly what was on the agenda as the QB Club held their 2014 Kickoff meeting in the GHS Student Center, ironically on one of the hottest days of our quickly fading summer. 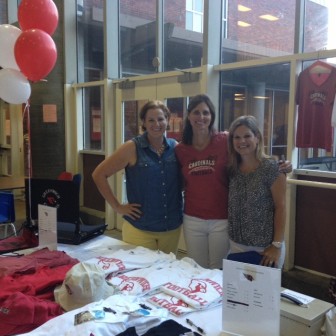 Varsity Coach Rich Albonizio (Coach Al) addressed the crowd of football parents and fans. “This year we have an excellent mix of seniors, juniors and sophomores on varsity. We’re not physically big, but we are fast.”

Coach Al will be relying on this year’s Captains Austin Longi, Matt Marzulla, Justin Montier and Jack Wygold to help set the tone for success.

Big Red’s first three scheduled games will be tough ones with the Card’s facing West Haven, Darien and New Canaan.  Anyone who follows Cardinal football knows the annual Darien and New Canann FCIAC match-ups are THE games of the season, along with the Staples Thanksgiving day game, of course!

While West Haven isn’t an FCIAC contender, a win against them will count towards points for a potential state run.

The Cards haven’t been in the FCIAC and State hunt since 2012.

As is a QB Club tradition, the Annual GHS Souvenir Program Dedication was announced. Coach Al revealed this year’s recipient, GHS Athletic Director, Gus Lindine, who has been the AD at GHS since 2005. “I am humbled and honored to work for such a great group of guys, kids, and parents,” Gus said.

In attendance on Tuesday night were GHS Cardinal Super Fans George and Nancy Chelwick. Up until two year’s ago, George filmed all the GHS football games for the Cards. A volunteer job he lost when the FCAIC decided that they needed to ‘pay’ someone to do the filming, when it became apparent that not all teams were willing to share their game footage with their competitors. 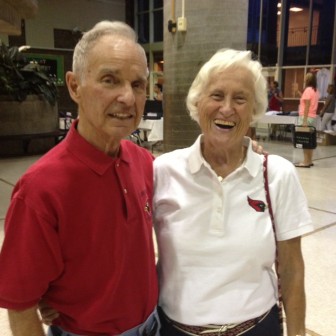 The Chelwick’s have saved every single GHS Souvenir Football Program since 1970, when their son, Tom, played for the Cards…and they graciously handed over each and every one of them to Coach Al at the start of this 2014 season.

I don’t know about you, but that sounds like the making of a very good football omen for our GHS Cardinals!