This article was written by David Gurliacci, Editor at sister site Darienite.com 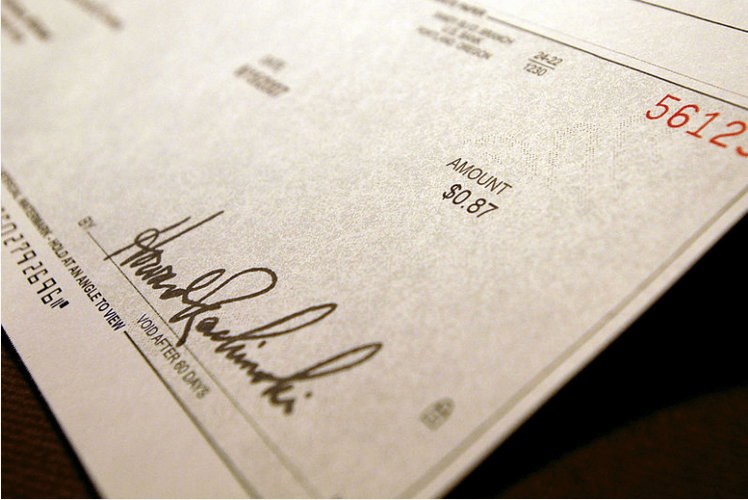 A check (for quite a bit less than a typical fraud)

A stranger approaches you about doing some job, either permanent or temporary. Before you start, they arrange to send you money to pay for some work-related expenses. You keep in touch by email or phone.

At some point not long afterward, they have you send part of that payment somewhere else. You do that. Then you find out the check they sent you bounced, you can’t find the stranger, and the money you sent elsewhere to pay for those expenses is now lost. Your loss. You’ve been scammed.

It’s happened before to people in Darien and elsewhere, and here’s the latest example, as described by Darien police, involving a Darien photographer who met a stranger in Greenwich:

Early in June, the Darien man was flying his drone with a friend in Greenwich when a man approached him and asked about the drone. During the conversation, the victim mentioned that he was a photographer.

The man said he owned a production company in New York City and was looking for production assistants. He gave the Darien man his business card and said his own assistant, “Meg,” would be in touch.

On June 24, the photographer got a text message from a woman who said she was “Megan O’Neill,” and worked for Elle magazine. She wanted to hire the man for an upcoming photo shoot in New Orleans. Several emails were exchanged. The woman asked for some personal information from the man as part of hiring him for the gig.

The woman then constantly texted him, asking if the check had been deposited. He deposited it about a week after getting it.

On July 7, the woman contacted him again, asking him to withdraw the $1,550 as cash and to deposit it at a Bank of America branch. He did that at a branch in Norwalk. She asked him to send her a receipt of the transaction.

On July 9, the man was contacted again. It was explained to him that there was a miscalculation with the payment. He was asked to use MoneyGram to send $300 to a person in Indiana. It was Sunday and banks were closed, so he didn’t find anything suspicious about the request, he told police. He sent O’Neill the receipt of the transaction.

That was the last contact he ever with from her.

On July 12, at about 1 p.m., the man stopped to get gas — but his bank card wasn’t working. He checked his account and found the check he originally received had bounced. He was $1,800 in debt. The next day, he went to Darien Police Headquarters to report the incident.

Police officers tried to contact the people who communicated with the victim, but they’d vanished. Detectives are continuing to investigate the matter.

Under federal law, according to the Federal Trade Commission, banks are required to make money available from deposited checks within days — but it may take as long as weeks for a bank to discover that a deposited check is fraudulent.

The bank isn’t liable for what the law requires it to do. You — the person who deposited the check — are liable. If you become a victim, the con artist knew about this, but you didn’t: It’s your responsibility to know if the check you deposited is genuine before using the money.

The Federal Trade Commission’s blog about scams regularly features posts about this kind of scam. One post discusses how this kind of scam occurred with con artists using a website for babysitters and nannies.

One post has this description of the “fake check scam” and simple advice to keep you from getting victimized:

Fake checks drive many types of scams – like those involving phony prize wins, fake jobs, mystery shoppers, online classified ad sales, and others. In a fake check scam, someone asks you to deposit a check – sometimes for several thousand dollars – and, when the funds seem to be available, wire the money to a third party.

The scammers always have a good story to explain the overpayment – they’re stuck out of the country, they need you to cover taxes or fees, you’ll need to buy supplies, or something else. But when the bank discovers you’ve deposited a bad check, the scammer already has the money, and you’re stuck paying the money back to the bank.

So don’t deposit a check and wire money or send money back in any way. 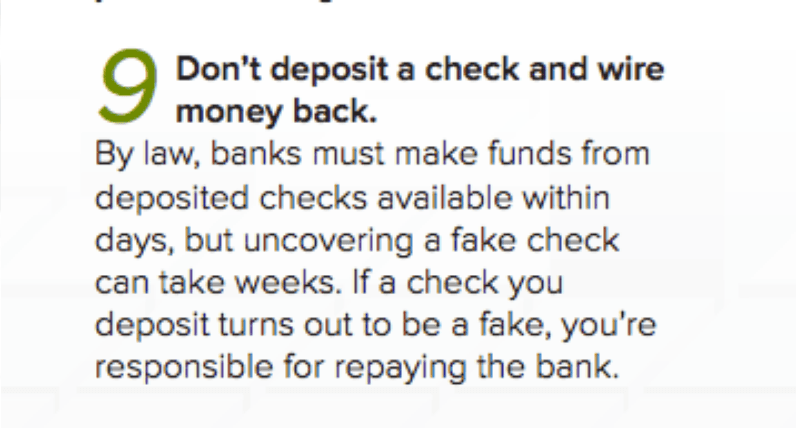 Image from the FTC brochure

If you are victimized, you can report the matter to Greenwich Police. Also, the FTC suggests:

If you or someone you know was tricked into transferring money – for any reason, report it to the money transfer company:

Then, report it to the FTC.