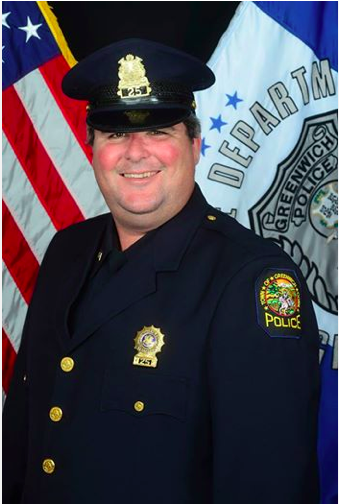 Chief of Police James Heavey announced the retirement of Detective Kent “Nooper” Reynolds, who has completed 25 years of service with the Greenwich Police Department. His retirement was effective August 1, 2014.

On May 30, 1989 he was sworn in as a Greenwich Police Officer and graduated from the 218th Class of the Connecticut Municipal Police Basic Police Academy. Detective Reynolds assignments included Patrol Officer, Police Dispatcher (1995) Accident Car Investigator (1997), Field Training Officer (1999) Youth Detective (2002), and finally he served as a Cold Case Investigator starting in 2011.
Detective Reynolds has received numerous departmental commendations for excellent police work and actions exemplifying the best traditions of police service. He has received numerous Chief’s Commendations for investigations and apprehensions involving a wide array of situations. These commendations span his career from Patrol Officer to Detective and include actions taken while both on and off duty. Detective Reynolds’ Commendations are representative of the full range of crimes and calls for service in Greenwich.

In 2002, based upon his outstanding achievements as a patrol officer and his proven investigative abilities, Kent was promoted to Youth Detective. While assigned to the Youth Division, he became a fixture at the schools around town. Besides the investigations that he conducted, Detective Reynolds performed enumerable talks to the town’s youth about serious matters of public safety. Detective Reynolds’ easy going communication style allowed him to express the most serious of content to the appropriate mental capacity of his juvenile audience.

Detective Reynolds’ file is replete with letters of praise from state officials, school administrators and parents alike all noting in some way his dedication, empathy and sensitivity when dealing with the most challenging of investigations. During this assignment, Detective Reynolds investigated many sexual assault cases and his efforts in bringing the suspects to justice resulted in a Chief’s Commendation several years running.

In 2010 GPD reorganized the Detective Division to include the new Special Victims Section (SVS) with the mandate to investigate crimes committed against our community’s most vulnerable: children, the elderly, and those with special needs. Reynolds’ high clearance rate of serious crimes resulted in his being assigned to the Cold Case Squad of this section in 2011.

“I’ve worked with Nooper for many years and as I reflect upon his service there is one thought that comes to mind: pride. Nooper was proud to be a Police Officer and proud to be a member of the Greenwich Police Department. He worked hard to make the community that he grew up in a better place. Nooper was a tenacious investigator always working to bring the criminals that preyed upon our citizens to justice. I look forward to his continued service with the Town in his capacity as a Special Police Officer. I wish him luck in his second career.”- Chief James J. Heavey

Upon his retirement Detective Reynolds chose to continue to serve the Town as a Special Police Officer and was sworn-in on August 15, 2014.