Though they’re typically just called dispatchers, that betrays the life-and-limb nature of their work.

For the 16-strong civilian force who work in 8-hour shifts around the clock, three or four people at a time, the windowless call center features walls of giant monitors and an array of phone lines. Computer screens feature weather maps and Greenwich street maps that reveal locations of fire hydrants, as well as active ambulances, police cars and fire trucks. 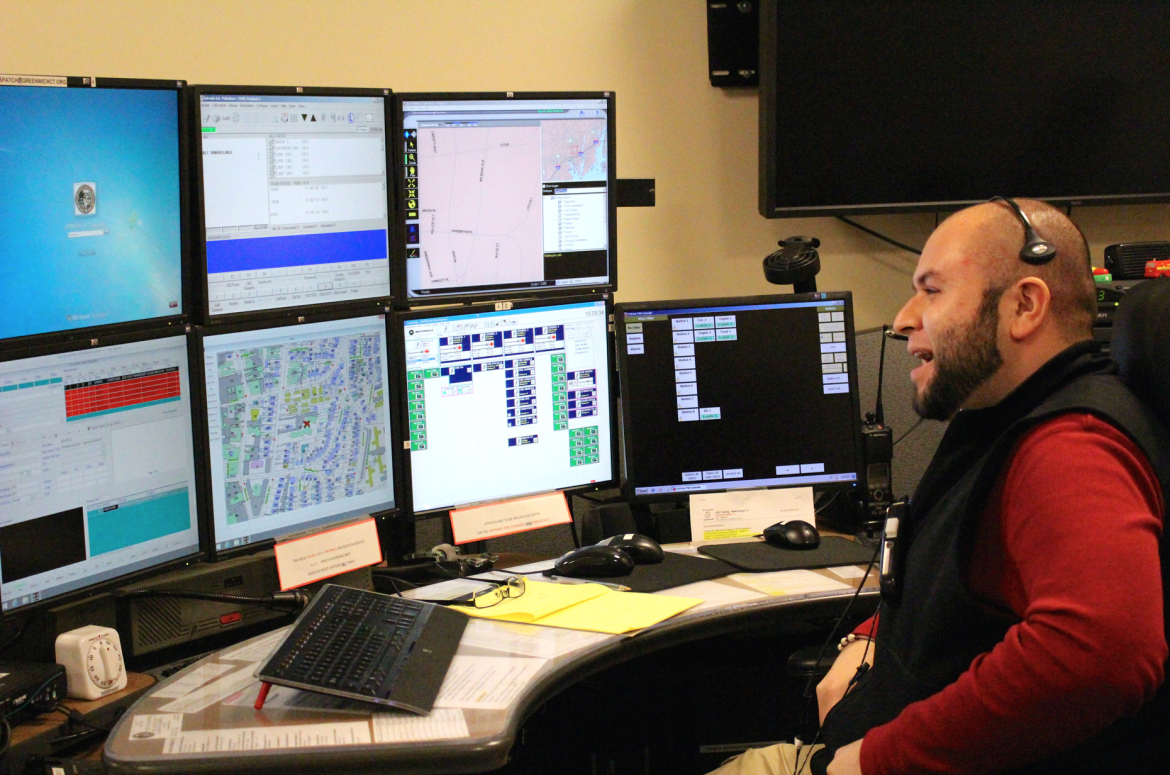 Juan Agudelo who previously was a member of the volunteer fire service and a dispatcher at Riverside Towing, mans the call center dedicated to fire emergencies. Credit: Leslie Yager

Though dispatchers are technically civilians, many of them are retired detectives, fire fighters, or police officers like Dwight Straub, who worked for 20 years as a White Plains police officer.

And while the phone lines are a mix of 911 lines and the administrative line (203) 622-8000, Police, Fire and GEMS calls all funnel through the same center.

According to Operations Lieutenant John Brown, the calls number in the thousands, with 45,000 police calls, 6,000 GEMS calls and 4,000 Fire calls for service in a recent year.

And though occasionally the lines fall silent, giving dispatchers time for tasks like researching warrants, the number of calls fielded is staggering, and will soar during a weather or emergency event.

Though storms like Sandy or Irene come to mind when Greenwich residents think “emergency,” Lt. Brown said the dispatch center will get busy, for example, in the event of SWAT team scenario or hostage situation. 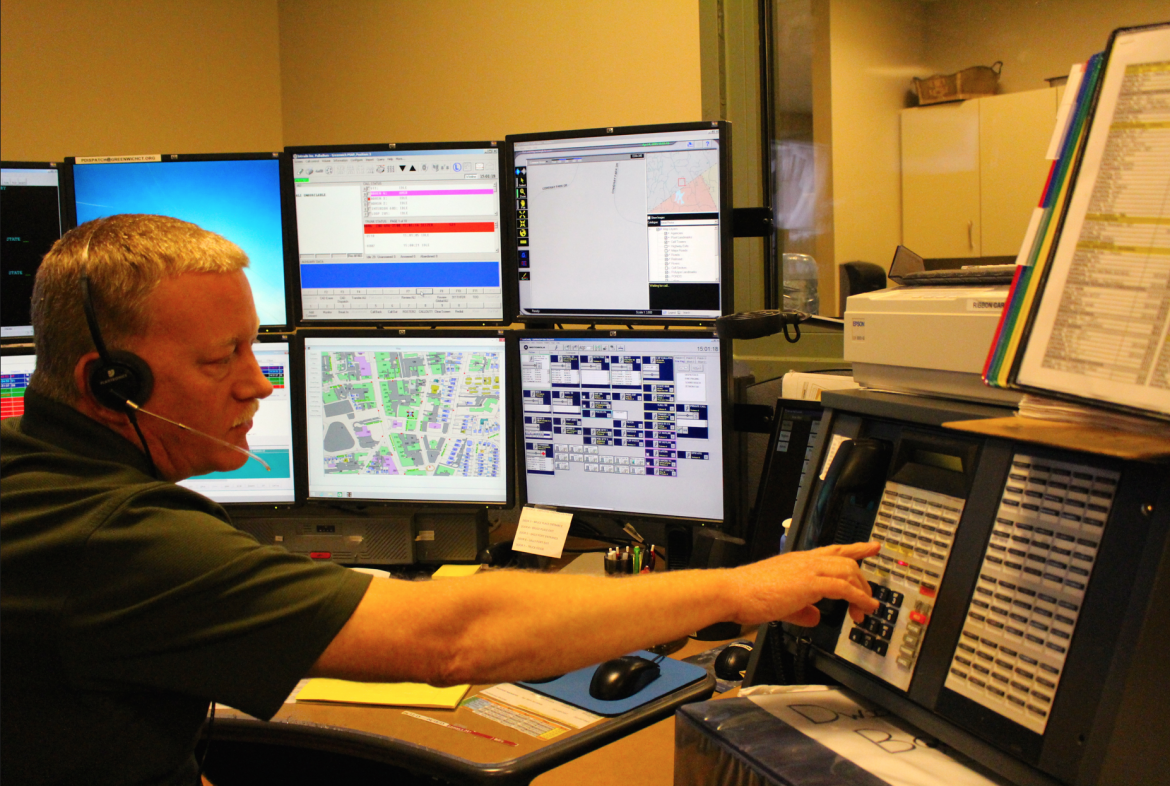 According to Lt. Brown, an important dispatcher trait is the ability to stay calm. Consider that in one moment a caller with a question that might better be served by calling Community Answers — Yes, people mistakenly call 911 with plumbing emergencies or even just to check in and say hello — the dispatcher is trained to quickly but patiently move to the next call, which could be a true emergency.

On Tuesday, Erin Boucher, a lead dispatcher who works with new hires, took a call that was a medical emergency requiring dispatch of an ambulance and police car.

“Code 20,” Boucher instructed over the phone, referring to lights and sirens.

Lt. Brown said that on medical calls, police are sent out along with ambulances and response times are typically a matter of minutes, though the dispatchers don’t always learn the outcome of the call. 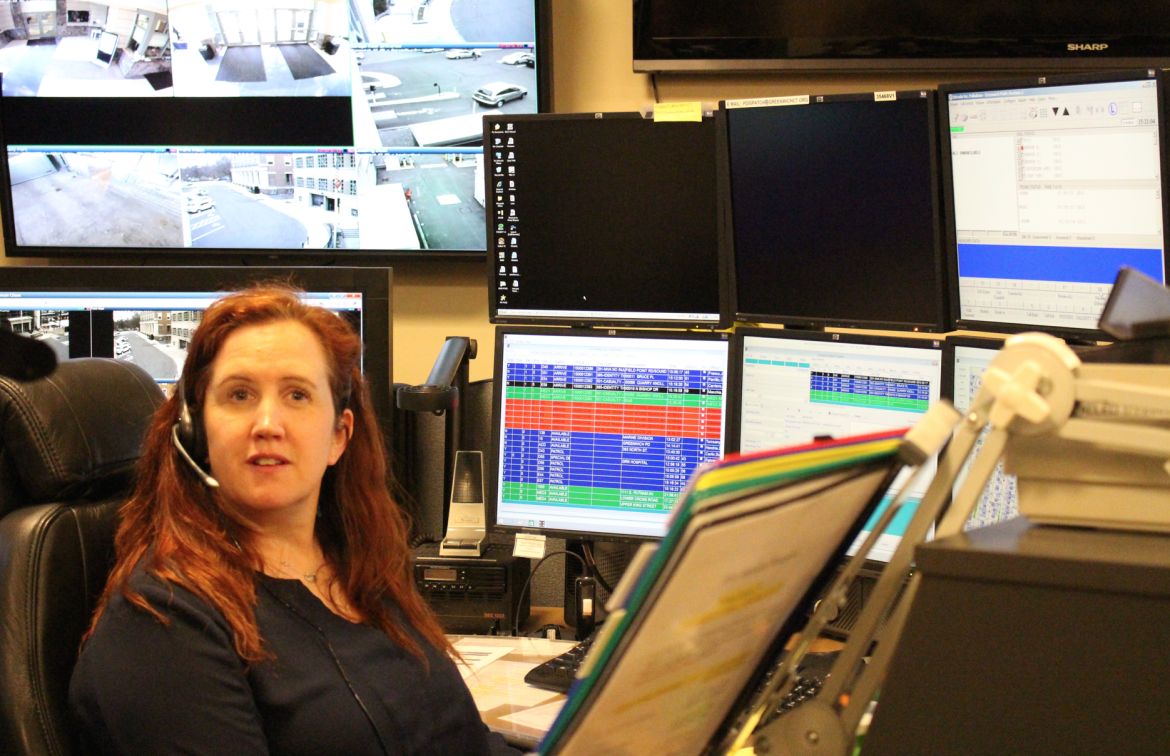 Lead Dispatcher Erin Boucher works with new hires. On Tuesday afternoon she received a call for a medical emergency and dispatched both police and GEMS ambulance for the “Code 20,” which indicates lights and sirens. Credit: Leslie Yager

“They take pride in what they do, “Lt. Brown said. “Lives can be saved or lost on their abilities.”

That said, many of the calls — suicides, homicides, accidental deaths, including children — can take a toll on even the most unflappable dispatch operator. Adjacent to the call center is a small break room where it is possible to decompress.

Lt. Brown said that during Hurricane Sandy the fully-staffed dispatch center was challenged to keep up with calls.

“There were 140-180 calls in just a few hours,” he said. ‘There were calls about wires down, trees down. You gotta give them credit. There was no time to decompress,” he said, comparing the situation to an officer on a three to four minute run with sirens blaring. “During storms, the pressure for dispatch stays on for hours on end.” 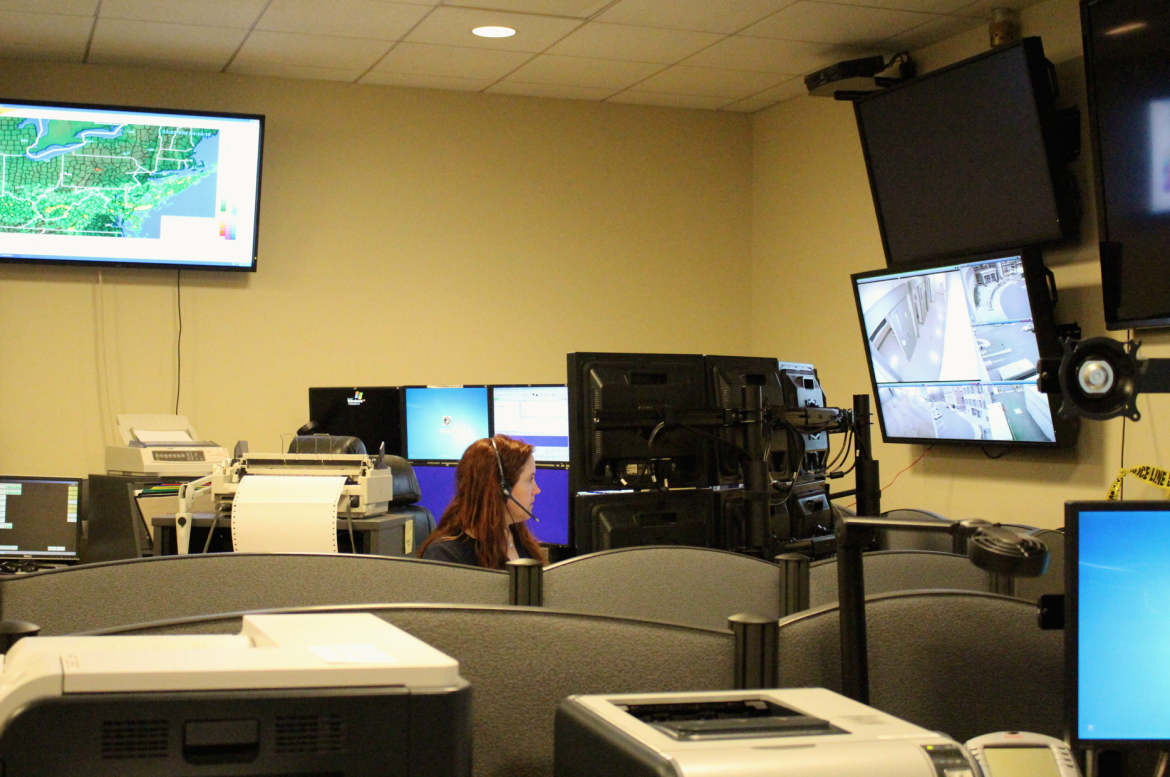 Lt. Brown said that to report a past crime, residents should not call 911. “But, if you witness, say, a shoplifter running out of a store and you have a description, by all means call 911,” he said. Other times to call 911 are for domestic violence incidents or robberies. “Call 911 if there is a crime in progress, a medical emergency, or any fire or life threatening emergency such as a motor vehicle accident.”

Lt. Kraig Gray explained that any time someone calls 911 and hangs up, dispatch will return the call to see if there is an emergency. “There are times when the person apologizes and says they misdialed when they meant to dial 9-1-4,” Lt.Gray said. “That’s okay. But, if no one answers when we call back, we send a car.” 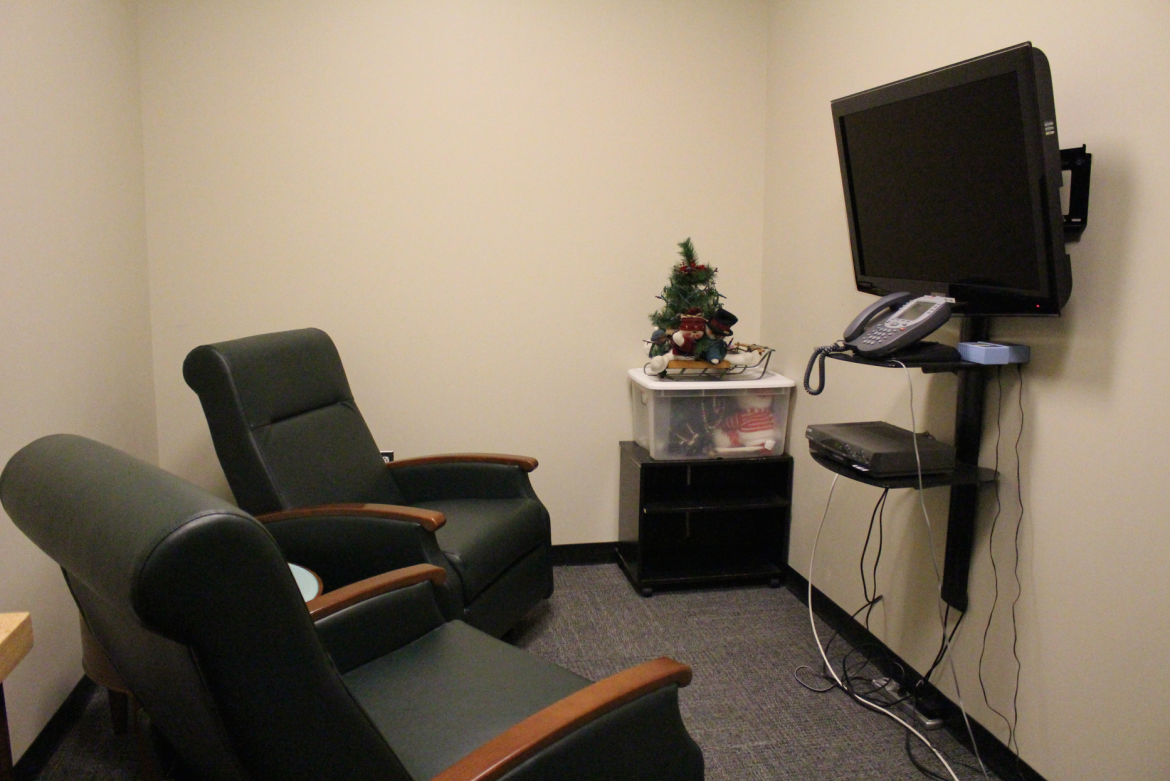 Adjacent to the dispatch center is a small break room. The job includes fielding emergency calls such as accidental deaths, homicides, suicides, and all manner of near-fatal emergencies. Though dispatchers don’t always learn the outcome of a call, and succeed by remaining calm, they need a chance to decompress from time to time. Credit: Leslie Yager

“There are domestic violence incidents when the caller will dial 911, and then say, ‘Oh, no, everything’s fine when we call back,” Lt. Brown said. “But the dispatcher can tell from the fear in their voice that it may be an emergency and we’ll respond,” he explained. “Also, because the dispatcher looks up the address, they can see if it’s an address where we’ve been before.”

Lt. Brown said in the event of a car accident, dispatch may receive a dozen or more calls about the same accident. But each call is potentially the source of additional information.

“During a flurry of 911 calls, say 30-50 calls for one accident, that one of those callers may be the one who was a witness,” Lt. Brown said. “Also, in the middle of that flurry you may have a suicidal call. Every single 911 call has to be fielded.  If 20 people call in the same car accident, you still have to ask, you can’t just say, ‘We got it already.’ One might be a witness.” 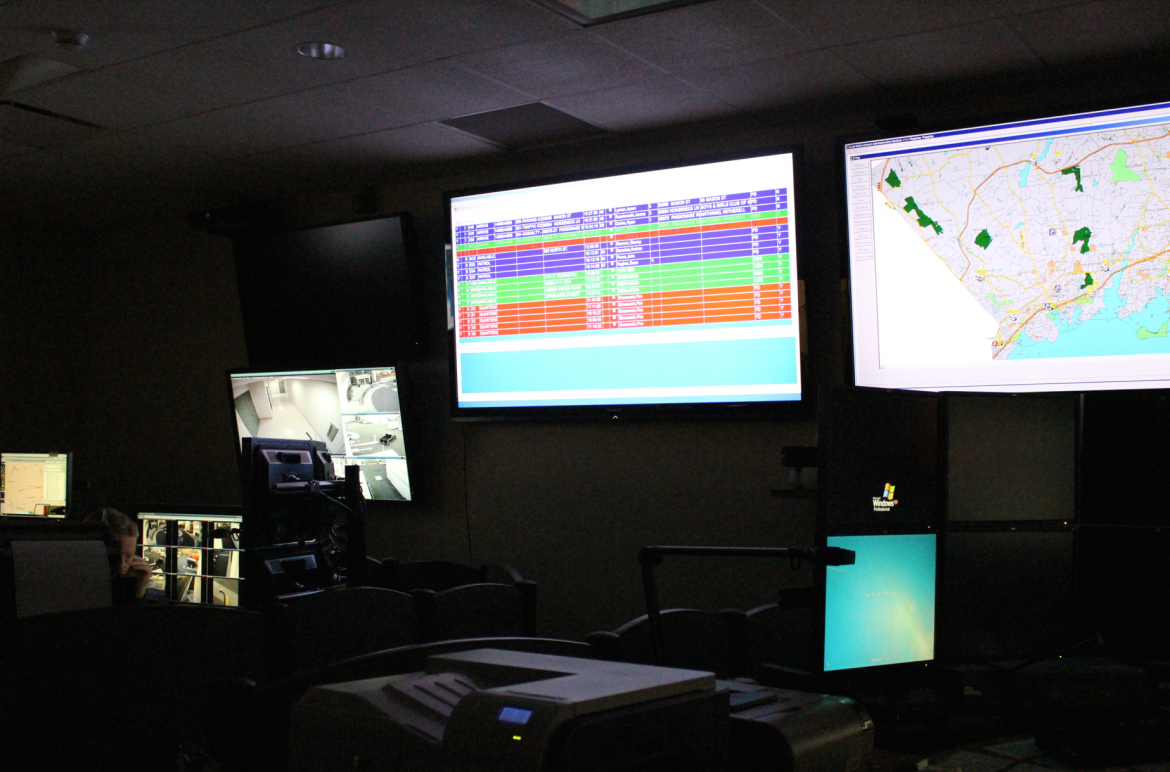 Dispatchers undergo a three-month training program in-house, during which they are evaluated at the end of every day. The process involves a state certification and emergency training classes. 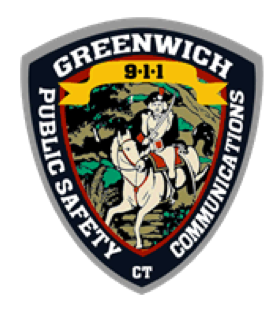 The job of dispatcher has become professionalized, and the annual dispatcher appreciation week was created in 1991.

Dispatchers attend conventions and ongoing training with a chance to compare notes with colleagues in other towns and states.

“Sometimes a conversation with another dispatcher will result in a new idea or use of a technology they can bring back to the job,” Lt. Brown said.

No doubt, dispatchers play an important role in public safety, and an informed public who know when to call 911 and when not to, is key their success.

“These men and women are the unseen and unsung heroes of emergency services,” said Lt. Brown. “We all owe them a thank you.”