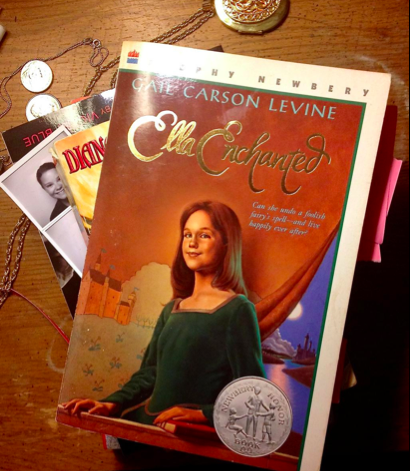 When I was little, my favorite book was Ella Enchanted. Some relative bought me a copy of Gail Carson Levine’s paperback because my name is also Ella, and little me thought this was the best thing to have ever happened, especially when my hair was also brown and I was also something of a weirdo.

I read and reread that book until its pages were torn and falling out, and I regularly took the audiobook out from Greenwich Library to listen to the cassette tapes on my canary yellow Walkman (#90schild). Ella Enchanted resonated with little Ella because its characters were smart, relatable, and well intentioned in a world that kind of sucked.

I was growing up in a heavily class-conscious Greenwich, so its themes of class stratification helped me make sense of the world around me. My childhood love for Ella Enchanted wound up being formative in ways I would not realize for over a decade. Far more than little kid lit, it ingrained in me the vital principle that everyone had the right to say no.

I just spent the weekend with my boyfriend in Los Angeles, and on day two of my mini-vacation I finished reading the only book I had brought with me. Lucky for me, my partner relished the opportunity to give me a tour of every bookshelf in his family’s home, stocked with everything from the classics to a smorgasbord of Young Adult lit.

There, nestled among the shelves, was his yellow-tinged copy of Ella Enchanted. I spent the next day racing through its familiar stories, feeling like I had rediscovered an old friend. I was maybe thirty pages in when I realized it was a book about consent.

For the uninformed, Ella is a fifteen-year-old girl whose mother has recently died. Her father, a total jerk, remarries a wealthy woman with two spoiled daughters. Sound familiar? Levine’s twist on Cinderella is that this Ella was “blessed” at birth by a fairy to always be obedient. Any command she is given, she must follow. Any command. No is quite literally not a word she is capable of saying. The book emphasizes the physical danger this puts Ella and her loved ones in—she is unable to escape ogres because they order her to not run away, and her budding love for Prince Charmont, also known as Char, is doomed because she would be the perfect tool for his assassination if her curse were discovered by an enemy. Her stepmother and stepsisters boss her around, reducing her to a scullery maid despite her station, and throughout the novel Ella struggles to break the curse on her own by resisting orders, resulting in fierce physical pain.

The book makes it clear that obedience is not a virtue, and that never having the option to refuse is a miserable, unlivable existence. It is a memorable and important lesson for little kids to learn.

The fact that this book is a metaphor for rape went over my head until now. The book never directly addresses the possibility of sexual assault. It is targeted for children eight and up, so such a scene would not be appropriate. But as a woman in her early twenties, fresh off a college campus where sexual assault is an epidemic, I found myself anxious when rereading Ella’s struggles like an older sister wishing to protect her younger sibling. Particularly disturbing to me as an adult reader was a sequence in which Ella’s father drugs her with “torlin kerru” mushrooms and introduces her to a much older earl that he wants her to marry in order to improve their financial situation.

The mushrooms inspire feelings of love and devotion, and Ella falls head over heels in love with the earl under their influence, flirting madly and making a fool of herself. When their effects wear off, she is mortified and furious. In the world of children’s lit, this is Date Rape Lite.

I hear a lot of parents (and activists) asking how we can talk to children about rape. How do you explain the concept of consent to little kids? More importantly, how do we teach little kids to respect the consent of others? Beyond the basic playground lessons of not touching strangers without their permission, the magnitude of consent is hard to make digestible, age appropriate, and fun.

I think children understand the importance of their own no being heard and respected, largely because of the resulting meltdowns we all once had when we were forced to go to bed early or make our beds. But respecting the right of others to say no, and the debilitating impact of having that right to say no taken away, needs to be taught and discussed. Ella Enchanted and other books like it are critical for that purpose. It validates the reader’s no, and gives the reader the ability to empathize with the no of others. It was by happy accident that the book wound up in my hands as a kid—I have no recollection of being taught about consent before some awkward health classes in middle school—but its themes still shaped my understanding of my own free will. And it made me really happy to learn my boyfriend had also loved the book when he was younger, not only because he fell outside of its gendered demographic and I love when little boys read girl books, but because messages about consent need to reach boys too.

Side-note: I was going to rewatch the Ella Enchanted movie and incorporate it into this blog post, but I can’t force myself to do it. From what I remember, much of the danger and intelligence of the book was bled from it in the film adaptation. The innocent and deeply cerebral central romance of Ella and Char was made moony and given several musical numbers. Respect to Anne Hathaway, but I’ll stick with the book.