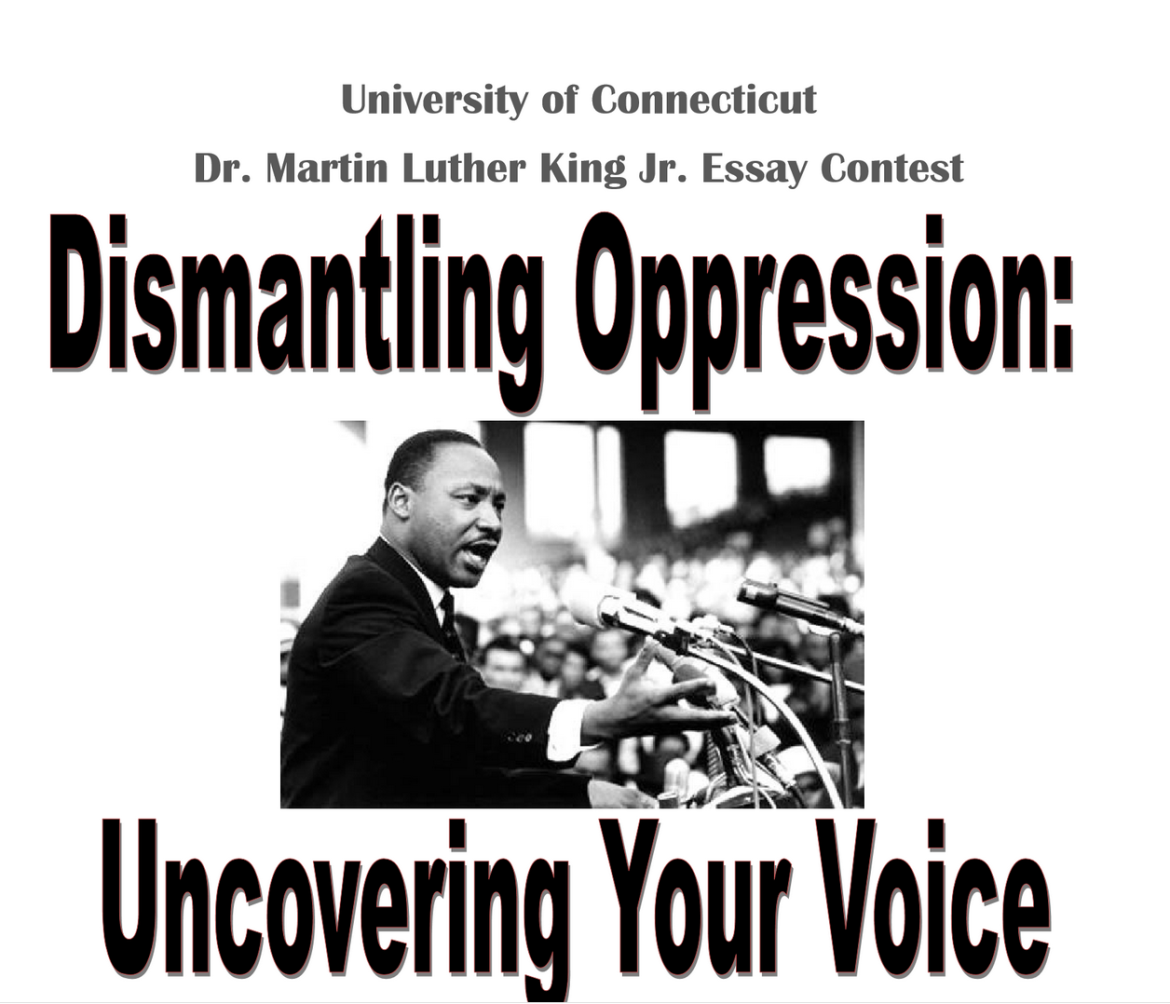 “Naureen’s essay ties together the Michael Brown murder, Martin Luther King’s I have a dream message, and her experiences in Greenwich and Fairfield County in a powerful piece,” said Mr. Hull.

Naureen, her family and Mr. Hull will be heading to Storrs for UConn’s Martin Luther King Jr. Day Celebration on January 18.

The 2016 essay challenge, Dismantling Oppression: Uncovering Your Voice, asked students to use the example set by Dr. Martin Luther King, Jr.’s legacy and enlightened leadership to discuss what it means to “uncover your voice” in order to create a more just society. Specifically, students were asked to explain what part they play, in dismantling oppression within the communities they’re apart of?

Dr. Martin Luther King Jr. was very passionate about his beliefs in having equality and justice in society. He wanted there to be no judgment and hatred towards minorities in America. He believed it was important that, “One day right there in Alabama little black boys and black girls will be able to join hands with little white boys and white girls as sisters and brothers”. (King “I Have a Dream”). His well-known I Have a Dream speech displays the vision Dr. Martin Luther King Jr. had for equality in America.

As a citizen of the United States, I am able to do things such as vote, have the freedom to speak, and the freedom to practice my religion. I believe that if I try, my voice can be heard. I say “try” because as a minority, I feel that even though people are equal on paper, that in many people’s minds, people are not equal. People create a mindset, which allows them to see a specific group of people as inferior to them. This makes it difficult for people who want to have their voice heard in society unless they are connected to it personally. I think that it is important for people to be able to find themselves by spreading their opinions and thoughts to help uncover their voice. Martin Luther King Jr. once said, “Faith is taking the first step even when you don’t see the whole staircase” (King “Quote”). This quote is significant towards uncovering one’s voice. This is because the quote says how everyone should take a chance, even if they are unsure of what the outcome may be.

One’s voice is truly able to be heard when they are personally affected through their race, religion, or where they live. For example, when the tragic shooting of Michael Brown took place, people did not start protesting until that tragedy occurred (Alcindor). They were able to uncover their voice as soon as something affected their community. It is essential for people to find their voices in order to create an identity, realize who they really are, and what they believe in. One may uncover their voice during any moment. This requires one to break out of their comfort zone. By doing this, one can mentally and emotionally grow into a stronger and more self-aware person. If a person is able to speak out once, it will allow them to become more confident and they will be able to speak out without worrying about being put down. I have been able to uncover my voice by participating in discussions where I would normally only listen. This has truly allowed me to create more opinions on current events and be able to share them with my peers. Uncovering my voice has also allowed me to use current events as well as my background to help listeners gain a better understanding of my culture and my opinions rather than looking at the color of my skin. This allows me to contribute to creating a more just society because just sharing one thought or opinion on equality can change one’s views and mindset.

Living in Greenwich, CT, an affluent and white neighborhood, it is difficult to prosper as a minority. To dismantle oppression in my community, it is important that people become aware of the cities and towns around them. In a piece produced for NPR, it discusses how a woman from Greenwich didn’t know anyone or anything about Bridgeport, a town just about 35 minutes away. The article states, ‘”I don’t think of it at all,” said Karen Schiff, a well-dressed young woman heading home from the Greenwich train station from her job in New York. “I don’t think I’ve ever even met someone from there. Maybe I drove through, I don’t know”’. Little did she know that the people who work in the expensive stores she shopped at, lived in Bridgeport. (“In Connecticut, Two Sides Of A Deep Economic Divide”). It is important that people in my community know that there are people of different backgrounds all over Connecticut. By becoming aware of the differences between people living in Greenwich and people living in other towns, I think that the people in my community can learn to accept those differences rather than putting them down. Another way to dismantle oppression in my community is to make the elementary schools more diverse. In a 2013 article written for the New York Times, it says, “Adriana Ospina, the lone Hispanic member of the Greenwich Board of Education, said, “You hear some of the kids being referred to as ‘the ghetto kids,’ and that is horrendous.” (Baker). From personal experience, the statement made by Adriana Ospina is completely true. In order to dismantle oppression, it is very important that students in Greenwich are exposed to people with different cultures and backgrounds at a young age so that they are able to see past the color of one’s skin. In Three Ways of Meeting Oppression, Dr. Martin Luther King Jr. states, “To accept injustice or segregation passively is to say to the oppressor that his actions are morally right” (King “Three Ways Of Meeting Oppression”). If we let minorities in my community and elsewhere to be put down, it will continue to happen because the oppressors will think that they are not doing anything wrong.

Uncovering one’s voice is very important. It allows people to speak out and grow mentally and emotionally. Speaking out can spark change in society for the good and allow others to feel confident in uncovering their voice. Dismantling oppression can be done by speaking out. This can cause communities to diversify their schools and expose young children to the differences and cultures of different people. By uncovering one’s voice and dismantling oppression, our society can be changed for the better and we can fulfill Dr. Martin Luther King’s dream.