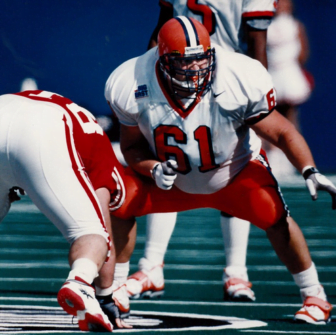 Scott Kiernan, who played football at Greenwich High School and graduated in 1993, has died at age 43.

In Greenwich, Kiernan, who was coached by Mike Ornato, was a Cardinal in 1991 when the team won the FCIAC championship and state title.

Kiernan spent two seasons on the New York Giants practice squad, and, according to the New York Times, in Sept 2001, the offensive lineman was among nine rookies or first-year players released.

We are saddened to hear of the passing of former team captains Scott Kiernan (1998) and Jim Mazurek (1963) this week. Our thoughts are with their families and friends. pic.twitter.com/LRwUw89jLv

On Jan 4, Syracuse Football tweeted condolences to the family of Kiernen, who was their team captain in 1998, the year they won the Big East championship.

We are deeply saddened to hear the news of former Cardinal Great, Scott Kiernan. He was a 1st Team Big East Player at @cusefoor and later played for the @giants. R.I.P. Scott, you lived larger than life, were a great teammate, brother, but a better person #cthsfb pic.twitter.com/wjD8f8tLNs

On Jan 5, Greenwich Football tweeted an expression of sadness at the loss of the former Cardinal Great. “R.I.P. Scott, you lived larger than life, were a great teammate, brother, but a better person,” they tweeted.

On Facebook, Greenwich Football posted on Jan 5, “We are deeply saddened to hear the news of the passing of former Captain and All State Player @greenwichfootball, Scott Kiernan. He attended @cusefootball where he was a 1st Team All Big East Selection before signing with the @nygiants. He was a standout player but with a bigger personality. He was loved by his family, teammates, and brothers. Our thoughts and prayers are with his family, R.I.P.”

According to GameTimeCT, Kiernan was one of four brothers that played on the Cardinals’ football team. His brothers Trey, Ted and Ryan also played for the Cardinals.

According to his LinkedIn profile, Kiernan had been working in real estate, specializing in vacation rentals.

The cause of his death is unknown.