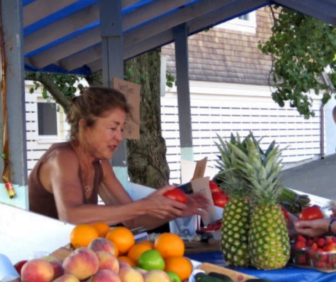 Sandra “Sandy” D’Vileskis, 73, of Greenwich, passed away peacefully with her family by her side on June 5, after a lengthy battle with lung cancer.

Sandy was born May 23, 1945 in Hartford. She came to Greenwich in 1970 and had truly made Greenwich her home town.

Sandy acquired her Bachelor’s Degree and Master’s Degree from the University of Bridgeport. Prior to her retirement, Sandy was a Technical Writer for Xerox.

However, Sandy is best known for her fruit and vegetable stand – “Sandy’s Summer Stand,” which residents will miss.

She enjoyed seeing her loyal customers year after year as well, as welcoming new customers with open arms.
Sandy was predeceased by her parents, her brother Francis, her aunt Cece and many aunts and uncles.

She is survived by her only daughter Kelly Feda (Randy), her grandchildren Madison Feda and Randall Feda, a sister Linda Marconi, two nephews John and Jason Marconi and an abundance of friends in town and Tortola, British Virgin Islands where she spent several months a year enjoying her passions of shelling, sailing, beaching, swimming in the crystal blue waters, being a social butterfly and of course her Pinot Grigio at “5”.

A Mass of Christian Burial was held on June. Interment was private. In lieu of flowers, memorial contributions may be made to Kelly Feda through the funeral home to benefit charities close to Sandy’s heart. Share a memory of Sandy at www.Castiglionefh.com .