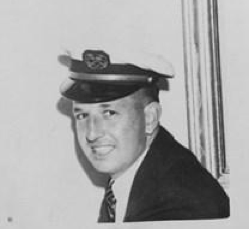 He is survived by his wife of 60 years, Joan Shea Green, and their four children, Bill Green – of St. Peterburg FL; Betsy Reilly (Vincent) of Darien; Kathy O’Connor (Michael) of Livingston NJ and Kerry David of Greenwich. He is also survived by his five grandchildren: Matthew Reilly, Katie O’Connor, Meghan Reilly, Erin David, and Kelly O’Connor.

Bill was born on February 22, 1925 in Greenwich to John and Mary Green and had one sister, Jean O’Shea. Bill was raised in Port Chester and graduated from Port Chester High School where he was a varsity athlete in both basketball and baseball.

At the age of 17, Bill enlisted in the U.S. Navy and served as an Aviation Radio Man Second Class and Arial Gunner. He was decorated with the Air Medal, the Distinguished Flying Cross, and the Presidential Unit Citation.

For most of his career, Bill worked as the Athletic Director for Bronxville High School. During his tenure, he coached many sports including varsity golf, track and football. Basketball, however, was his true passion. He was named league coach of the year twice and upon his retirement, in 1985, a Christmas basketball tournament was established in his honor. In addition to his work at Bronxville, Bill and his family spent many summers at Camp Dudley in Westport, NY, where he shared his love of sports.

Bill and Joan split their time in retirement between Vero Beach, FL and Martha’s Vineyard, MA, where he enjoyed golf, duplicate bridge and reading. His biggest and brightest joy was spending time with his grandchildren; we all will dearly miss him.

Family and Friends are invited to visit at the Leo P. Gallagher & Son Funeral Home, 31 Arch St. Greenwich, CT on Thursday December 18, 2014 from 2 ~4 and 7 ~9 p.m. A Mass of Christian Burial will be held at St. Timothy’s Chapel, 1034 North St. Greenwich on Friday, December 19 at 11:00 a.m. Interment will follow in St. Mary Cemetery. To leave an online condolence, please visit www.leopgallaghergreenwich.com.