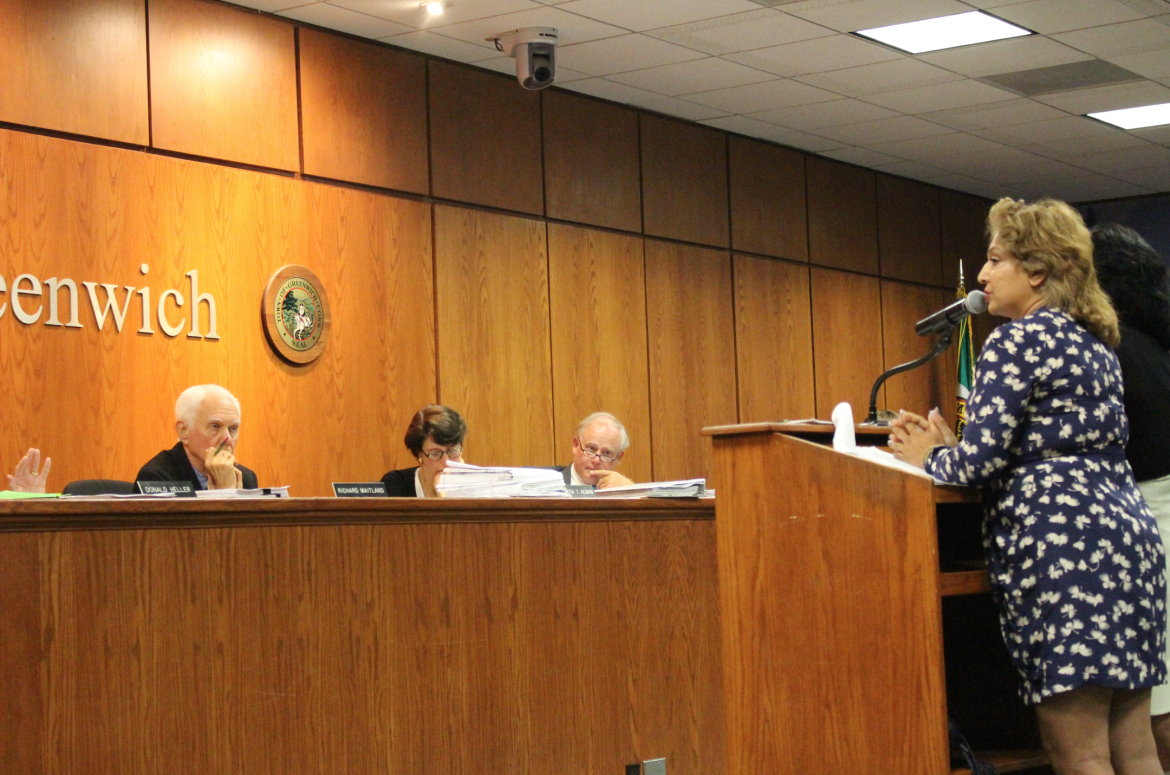 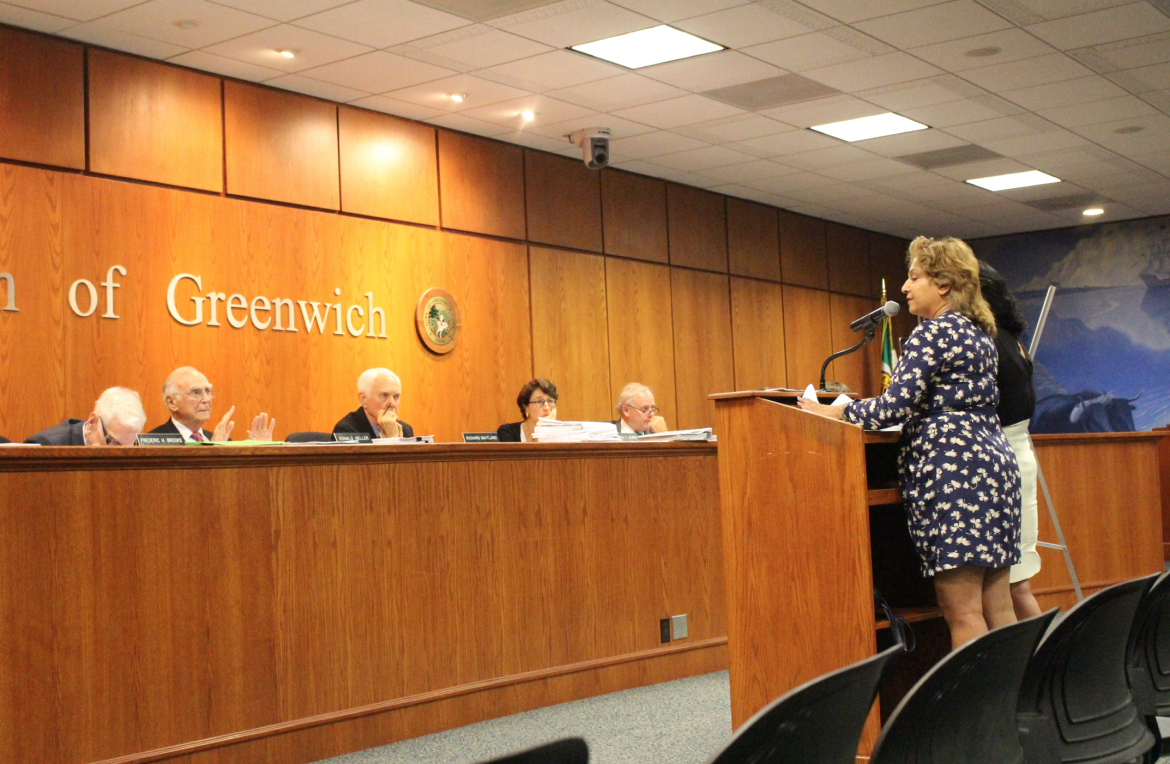 After months of returning before the Planning & Zoning (P&Z) commission, an application for an addition to an existing two-family house at 19 Division Street on a 6,334 sq. ft property in a multi-family zone finally got an answer. No.

The applicant, Saima Qamar, declined to request an extension for her application on  Tuesday night. Neighbors have turned out repeatedly over months of meetings to gripe to P&Z about behavior of the applicant, and on Tuesday night there were again present.

The applicant’s treatment of her neighbors was discussed during decision time, though it was ultimately the applicant’s incompleteness of drawings and refusal to change the drawings to comply with town standards that resulted in the rejected application.

During a back and forth between the applicant and P&Z that went on for 90 minutes, the applicant was accompanied at the podium by her sister who held up an iPad to video the commissioners. 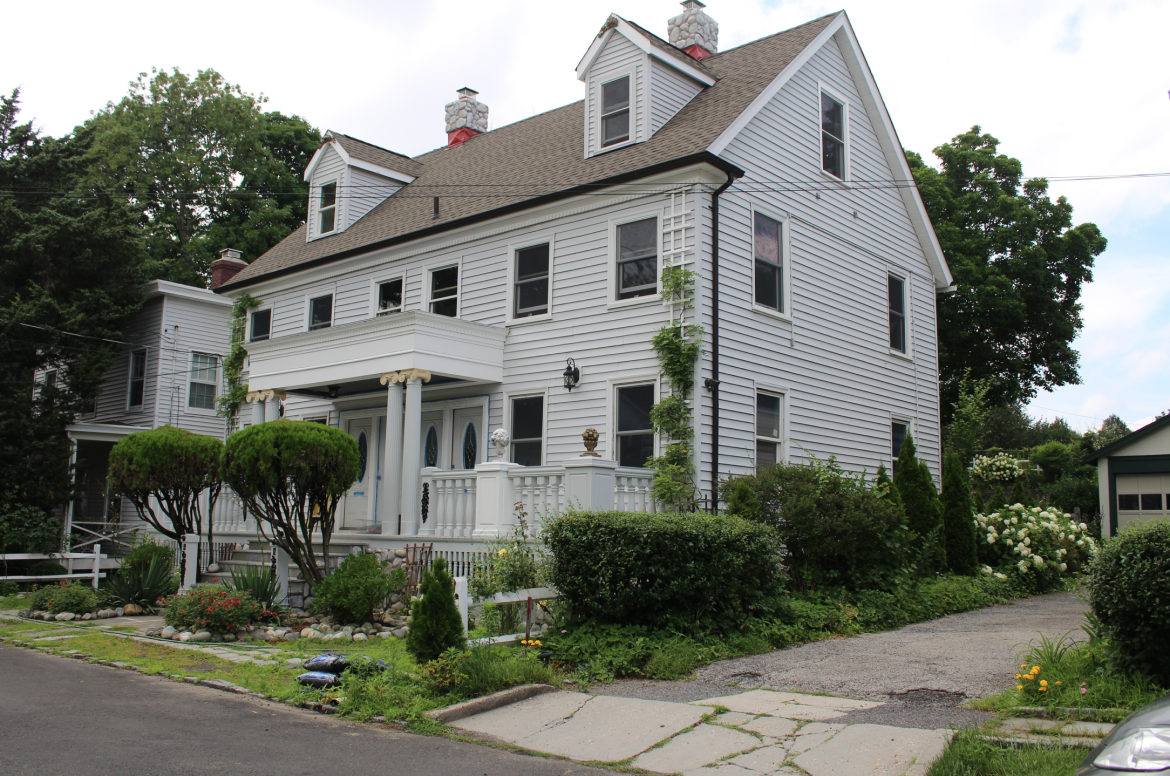 Dean Gamanos, who lives adjacent to the east of the applicant, said her stone paver path encroaches onto his property. He added there there are unsightly bags of rubbish out front, and that he had seen Ms. Qamar park her car on pavers in her front yard. He said that despite her claim that other people do likewise, he had lived on Division Street three times as long as her, and never seen anyone else on Division Street park do that. Mr. Gamanos said he was also concerned that there was not a wide enough path for Ms. Qamar to bring in equipment for her proposed addition. 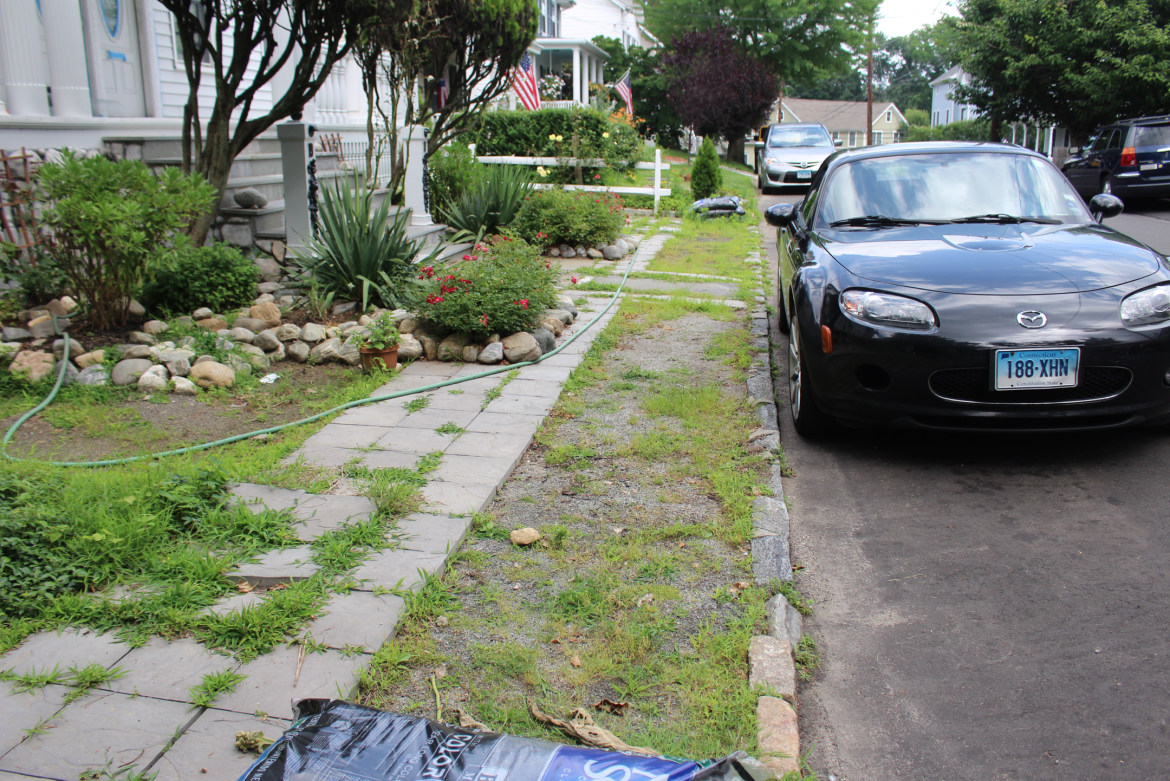 Dennis Reilly, a neighbor at 21 Division St, adjacent to the west of the applicant’s property, complained about the  Ms. Aamar’s exterior lights at 19 Division Street.

“The lights do shine onto my property,” he said, refuting her claim to the contrary. “They are beyond the limits of what is allowed. As of last night she also installed lights on the rear of my property that she says are garden lights. They’re used as surveillance lights and are not pointed at her gardens,” Mr. Reilly said.

Mr. Reilly also questioned how the applicant might get machinery, particularly a back hoe, through the narrow path to the back yard and asked where there might be room for a dumpster on Ms. Aamar’s small property. He also complained about bags of trash languishing in the front yard.

On that note Ms. Qamar brought a stack of photos she said she’d taken within three miles of her home showing other properties where residents park cars in their yard. Commissioner Alban pointed out that the homes in the photos were quite a distance from Division Street and included homes that are not in her same multi-family zone.

As for neighbors complaints, Ms. Qamar was quick with answers.

When Mr. Heller pointed out that the outdoor lighting is still an existing violation with the zoning office, Ms. Qamar said the problem could be solved by her changing a bulb and pointing it in a different direction.

“I have been pushed around enough…I have been asked to pick up pavers. I have asked for answers that I never got and have wrong responses. Each time I applied for it, they falsely put in a violation…and the same is going on for the lighting,” she said. 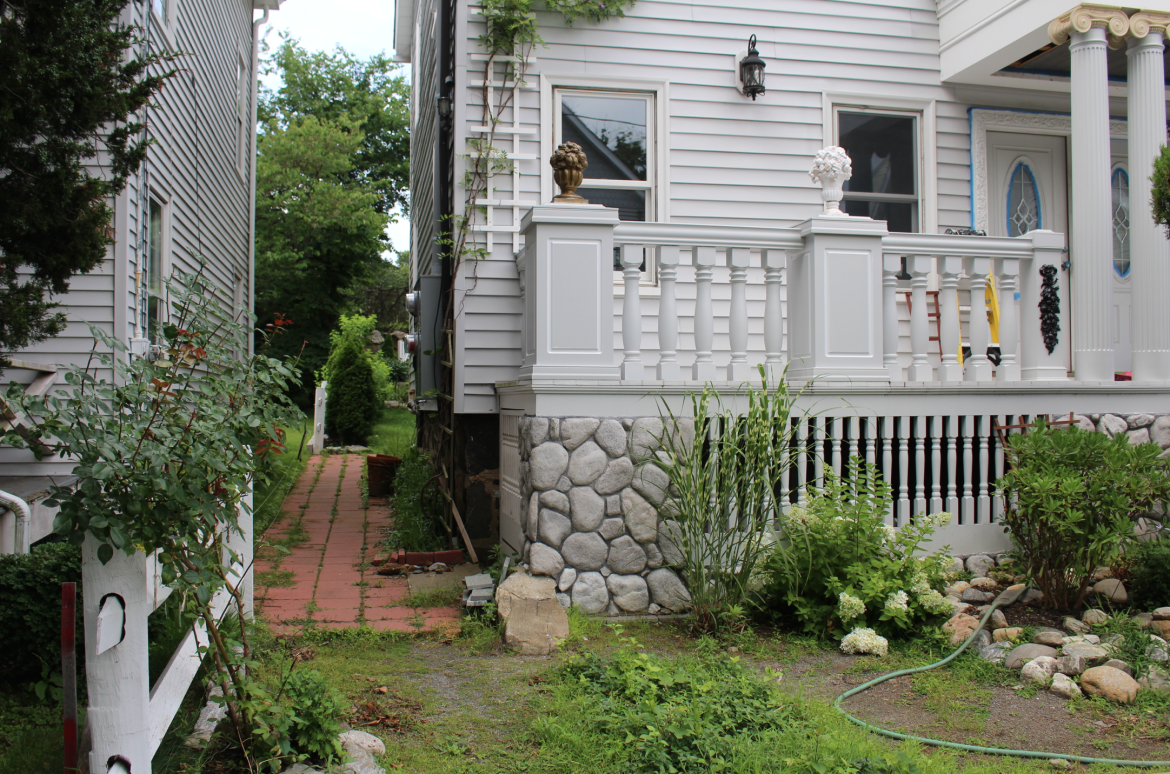 Path that encroaches on a neighbor’s property on Division Street. Credit: Leslie Yager

As for the challenge of getting a Bobcat into the back yard to dig a foundation, she said if she had to, she would hire people to dig by hand. She said she would pick up the stones on the path that encroaches on her neighbor’s property if Mr. Gamanos would have a survey done and prove they are encroaching. That said, the path which she described as “slim” is shown on her own survey to be encroaching on her neighbor’s property.

Time and again Ms. Qamar grew short tempered with the commission, interrupting, arguing and even mimicking the director of Planning and Zoning when she made a simple observation over an errant arrow on the applicant’s drawings.

Mrs. Ramer asked Ms. Qamar to be courteous. “You are talking over us. None of us has the opportunity to finish a question,” she said after Ms. Qamar interrupted Mr.Seale.

At one point, when Mr. Maitland calmly pointed out that the stairway to the basement from the kitchen was not shown on the applicant’s drawings, Ms. Qamar grew exasperated. “Oh really? A stairway is not relevant!” she said.

“Just because you say so?” she asked Mr. Heller. “Or can I address the comments?”

“Ok, what did you want to say?” Mr. Heller relented.

Ms. Quamar repeated her arguments about the encroaching path.

During the discussion portion of the meeting, after applicant and neighbors had left the building, Ms. Alban said she was troubled by the incomplete information on the application, the unresolved Floor-Area-Ratio (FAR) question and issue of light trespass. She said she was concerned that the addition to the house couldn’t accommodate additional parking.

Mr. Maitland said that the parking issue was not an issue vis a vis the addition because it did not add a bedroom, but he pointed out that Ms. Qamar was not allowed to park in her front yard.

Though nothing about the application would impact the streetscape, Ms. Alban pointed out that neighbors’ concerns were significant.

“Her methodology questioning the FAR is questionable and she said she would not consider changing it for this purpose,” Mr. Maitland  said of the applicant’s basement calculations.

Ms. DeLuca pointed out there were inconsistencies with various sets of sets of site plans. “And a clear statement that there is no plan to change those inconsistencies, we’re set with what’s before us,” she said.

The dates on the site plans also caused great confusion. “This is a tight urban site and those things should be clear,” Mr. Maitland said.

“She has told us she’s going to take us to court,” Mr. Brooks said. “There are so many violations here, so many refusals to follow our regulations, anything else becomes academic. I don’t see how we can approve an application that is deficient and she’s stated in strong language that she’s not going to do it. She has blatantly and absolutely refused to accept our recommendations.”

“We have a set of building zone regulations everyone has to comply with,”Ms. DeLuca said. “The difference here is it’s been made very clear on the record that she disagrees with the requirements of the regulations she has no intention of complying with them.”

Mrs. Ramer said the FAR put her at possibly over 90% but she did not think the addition would take the FAR over 100%. “My view is that all of this is solvable, but she has to do correct calculations ahead of the permit,” she said. When an applicant is close to 90% of their maximum FAR, they must do more to demonstrate the calculations are correct.

A motion was made to approve the application with conditions, but did not carry. A second motion, to reject the application carried, 4 to 1. Mrs. Ramer opposed the motion. Mrs. Alban, Mr. Brooks, Mr. Maitland and Mr. Levy all voted to deny.