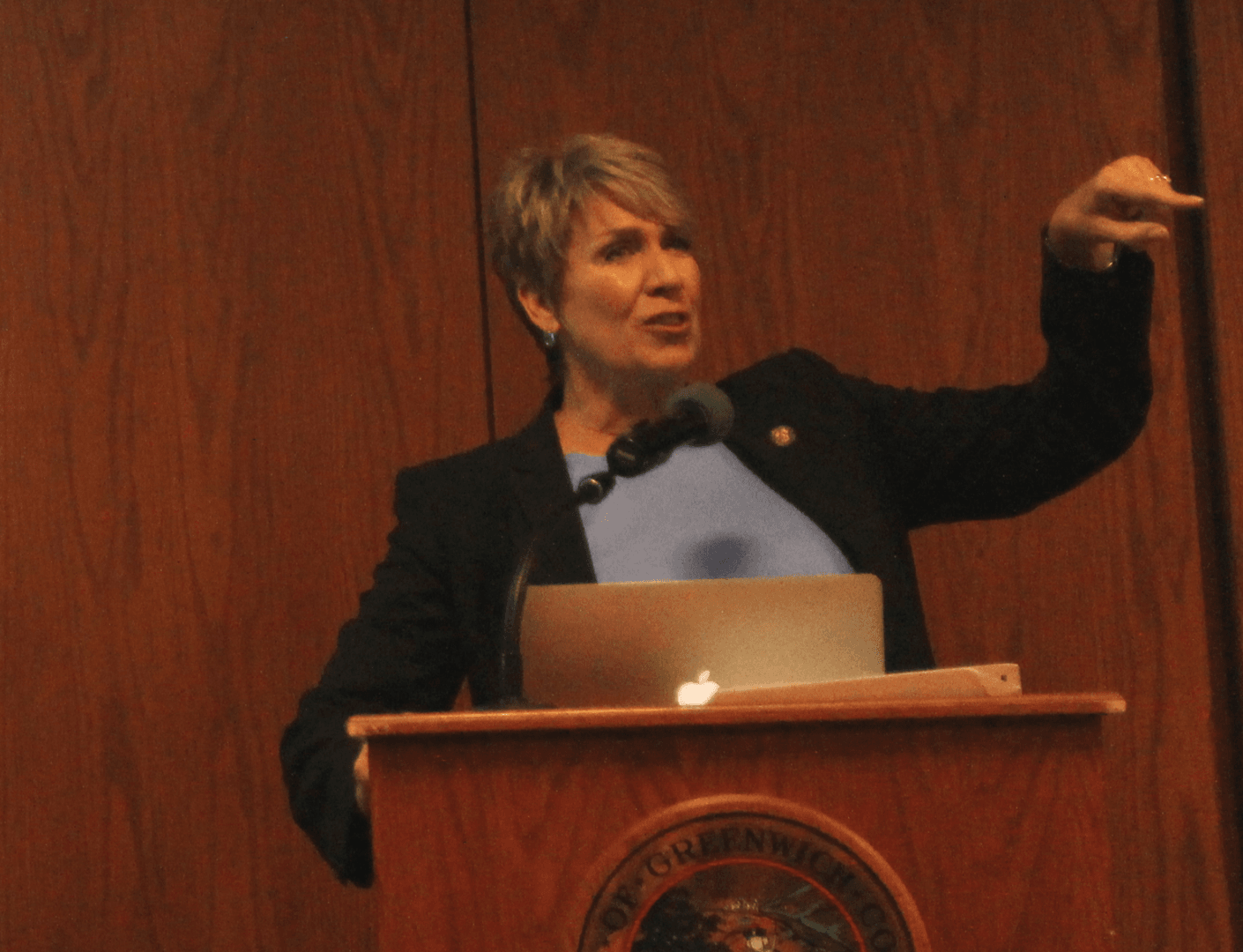 An audience of about 75 people attended despite the rain and conflict with the RTM meeting.

Since February State Rep Devlin said there have been 21 forums across the state. Greenwich was the last.

Devlin and Martin said the Republicans alternative to tolls is a plan called Prioritize Progress.

Prioritize Progress assumes money collected through tolls can be diverted for other needs before it enters the state’s transportation fund (STF) and transportation dollars would also get used for DMV labor costs, fringe benefits and other administrative expenses, leaving less for infrastructure.

“Tolls are an easy and lazy way to promise a solution to the state’s transportation issues without looking at the realities we face.” – Prioritize Progress PowerPoint

Governor Lamont arrived during the forum and introduced himself.

“I’ll give you a little bit of good news,” he said. “We disagree on a lot of things up in Hartford. One thing that Republicans and Democrats both agree on is how incredibly important it is that we fix our broken transportation system.”

Lamont said he had talked to every business leader in Connecticut.

“Prioritize Progress says we need an additional $700 million a year to fix the roads and 90-year-old bridges that are slowing things up,” he said.

“The biggest difference up in Hartford is that Prioritize Progress says we’re going to  put it on the credit card and borrow that money, $700 million a year, 100% paid for by Connecticut residents, plus interest.”

“I know the alternative doesn’t make anybody happy, which is why you’re all here. But the alternative is a user fee by the folks who use the road to pay for it, and 40% of it would be paid for by out-of-staters.”

Lamont said the state’s transportation system must be fixed. “Take it off the balance sheet and off the backs of tax payers,” he said.

“Thank you for the opportunity,” he said. “I didn’t mean to interrupt your party.”

Devlin said back in January she and members of the Republican caucus sent out a survey asking, ‘Can you afford 82 tolls?’

“Granted this isn’t a scientific survey. Being Republican sure it could be slanted,” she said. “But over 11,000 responses from our caucus members showed 90% said no and 10% said yes.” 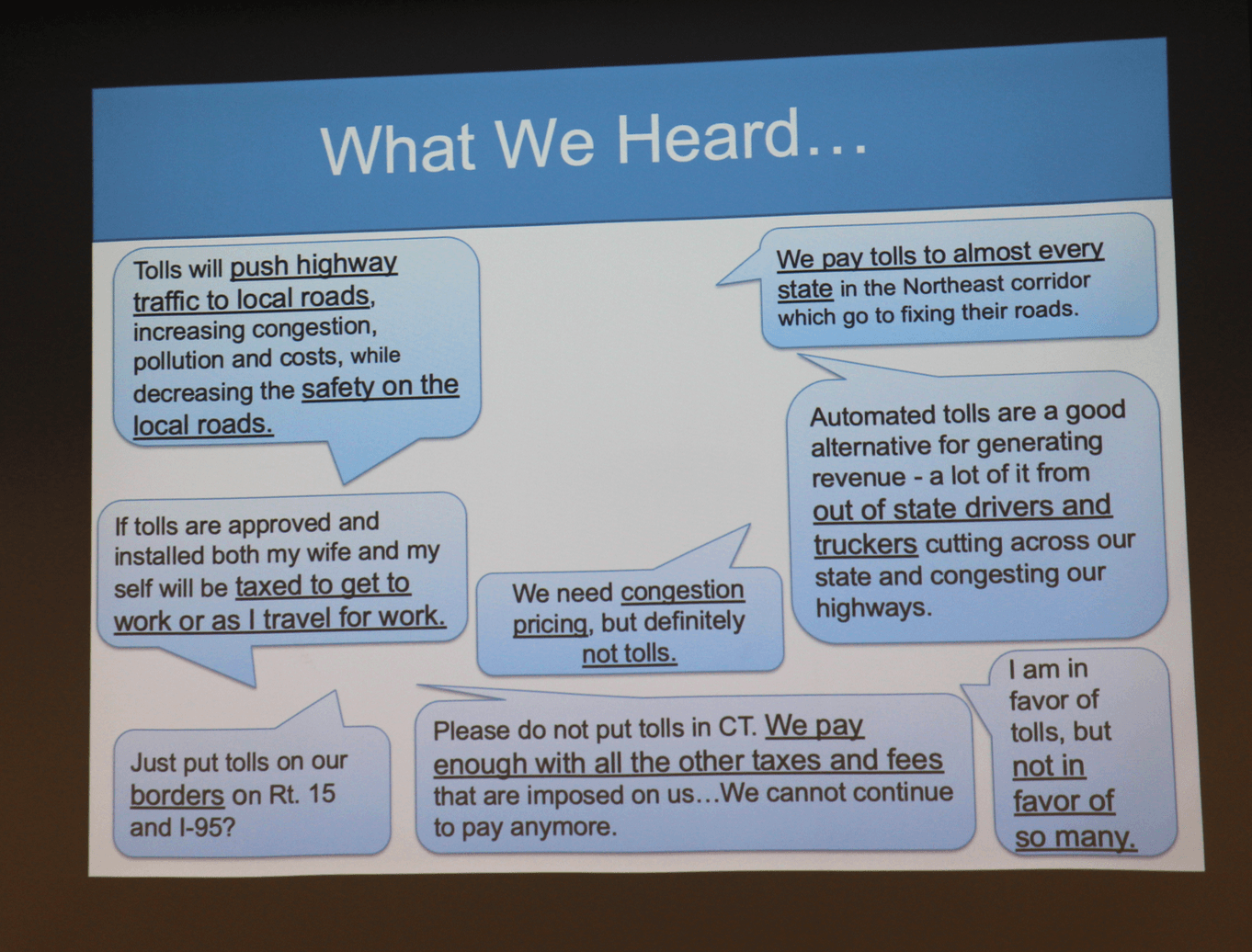 Some of the responses as to why included: ‘Tolls are going to push traffic onto our local roads and create a safety concern.’

“But we also heard, ‘Listen, it’s time for us to get on board. I pay tolls from Florida to Maine. Why are we the only state not collecting tolls?'”

“We also heard, ‘I’m going to get taxed going to and from work.’ And that, ‘Governor Lamont has created a common enemy,” she said. “We heard, tolls are fine, but just on borders. We heard, ‘We pay enough fees and taxes already.’ We also heard, ‘Tolls are okay but just not so many.'”

“We also heard, ‘Do what the heck you want because I’m out of here,'” she said. 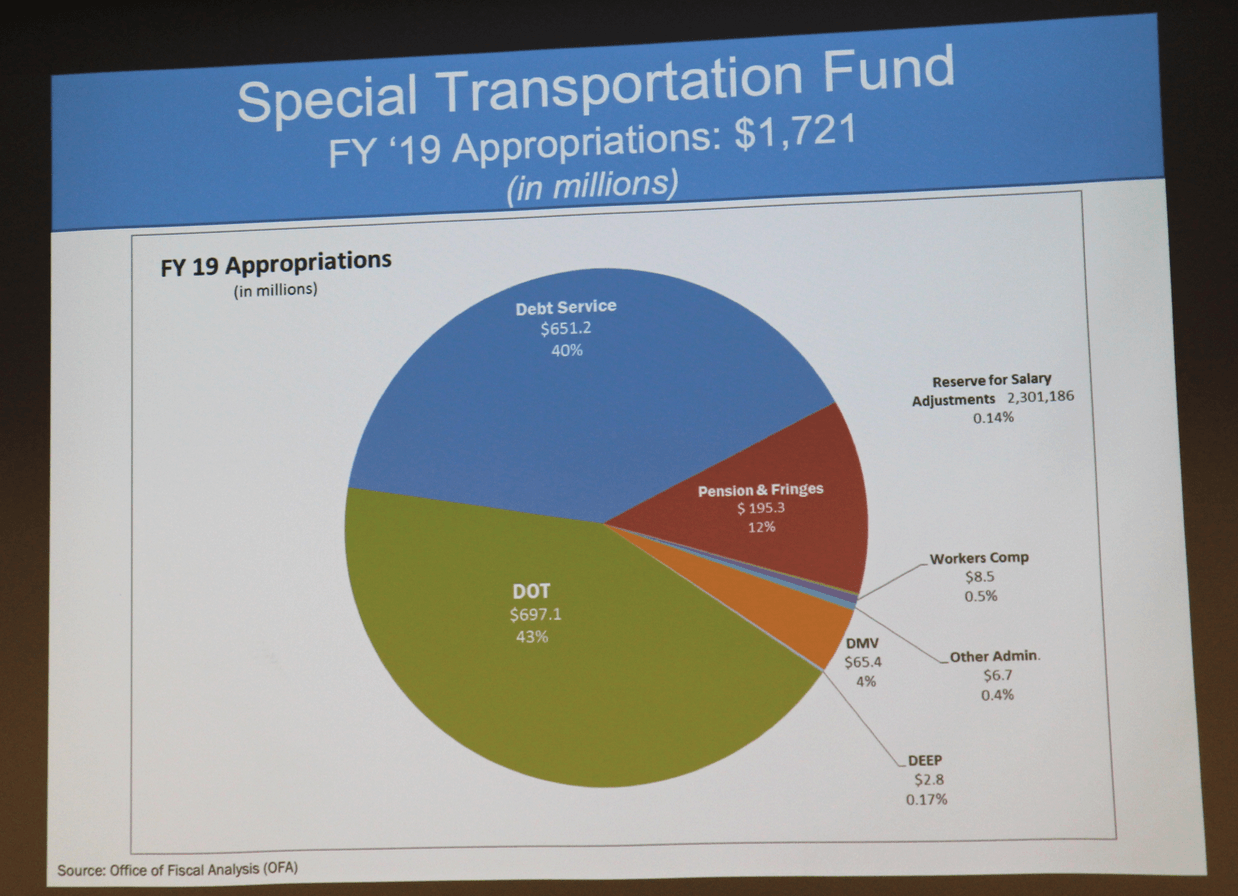 Devlin said the STF was formally created in 1984 after the Mianus Bridge collapsed.

“The gas tax was 14¢ at the time. It was agreed that the gas tax would go into this fund and would increase one cent a year up to 21¢. The state was able to get good rates on its bonds….Everything was moving along swimmingly until 1987 when the general fund fell into deficit.”

Devlin said beginning in 1987 money was diverted from the STF and expenses were moved into it. She warned that would happen again with money raised from tolls.

In 1987, “They said the transportation fund has a lot of money so let’s move all of the operating expenses for the Dept of Transportation out of the general fund and put it into the STF because it is transportation related.”

She said that in 1989 the pattern repeated and the state moved the pension and fringe benefits costs of DOT employees to the STF.

“That solved everything,” she said.

However, in 1991, she said the general fund was in deficit so the decision was made to move both operating expenses and pensions and fringe costs for all DMV employees out of the general fund and into the STF.

“But at this point alarm bells went off because it put the STF in jeopardy, and in deficit,” she said. “The gas tax skyrocketed, going up 36¢ a gallon, it was to cover these costs.”

“Around 2000 the decision was made to lower the gas tax to 25¢ and it’s been frozen since then,” Devlin said, adding that that revenue will remain steady.

“We keep hearing a crisis about the gas tax drying up and going away,” she said. “No such thing. It’s steady if not higher now than in 2005.”

She said the STF’s purpose is to pay off the debt service on bonds issued for 20-year infrastructure projects.

That said, she warned that the fastest growing expenses are subsidies and pensions & fringe costs.

“They were $19 million a couple years ago and are now almost $200 million, and are projected to grow exponentially,” she said.

Devlin said the federal government would not sign off on truck-only tolls, out-of-state-vehicles-only tolls, or border tolls, but that tolling cars and trucks could be approved if the state implements congestion pricing. 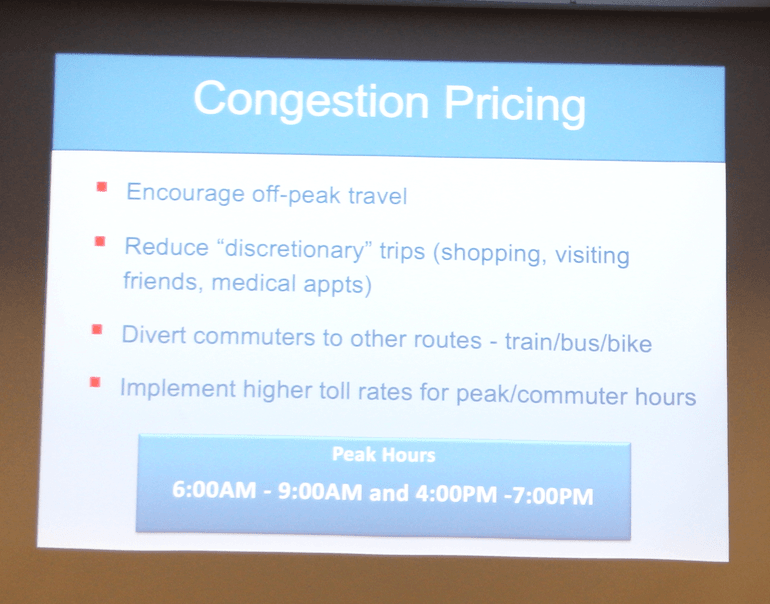 “Congestion pricing is designed to encourage off peak travel. You may not consider these discretionary trips but they want you to reduce them. That might be a medical appointment, visiting a friend of family member, going out for a meal. It’s intended to divert commuters to other routes. So, take a bus, ride train, ride a bike, but get off the road during those times,” she said.

Congestion pricing works by implementing higher rates during peak hours which are from 6am to 9am and 4pm to 7pm.

Devlin said tolls studies say that 60% of toll revenue would come from Connecticut residents and 40% from out of state drivers, and that would amount to $645 million from residents.

And whereas Lamont said Prioritize Progress would put $700 million “on a credit card,” the PowerPoint presentation said, “If we want a dedicated stream of funding that is truly limited to infrastructure improvements, the only way to do that is through bonding within the state’s new bonding cap which is the current way the state funds transportation projects.”

And while Lamont calls the tolls a user fee, the Republicans say that tolls are a tax that will disproportionately hit the middle class.