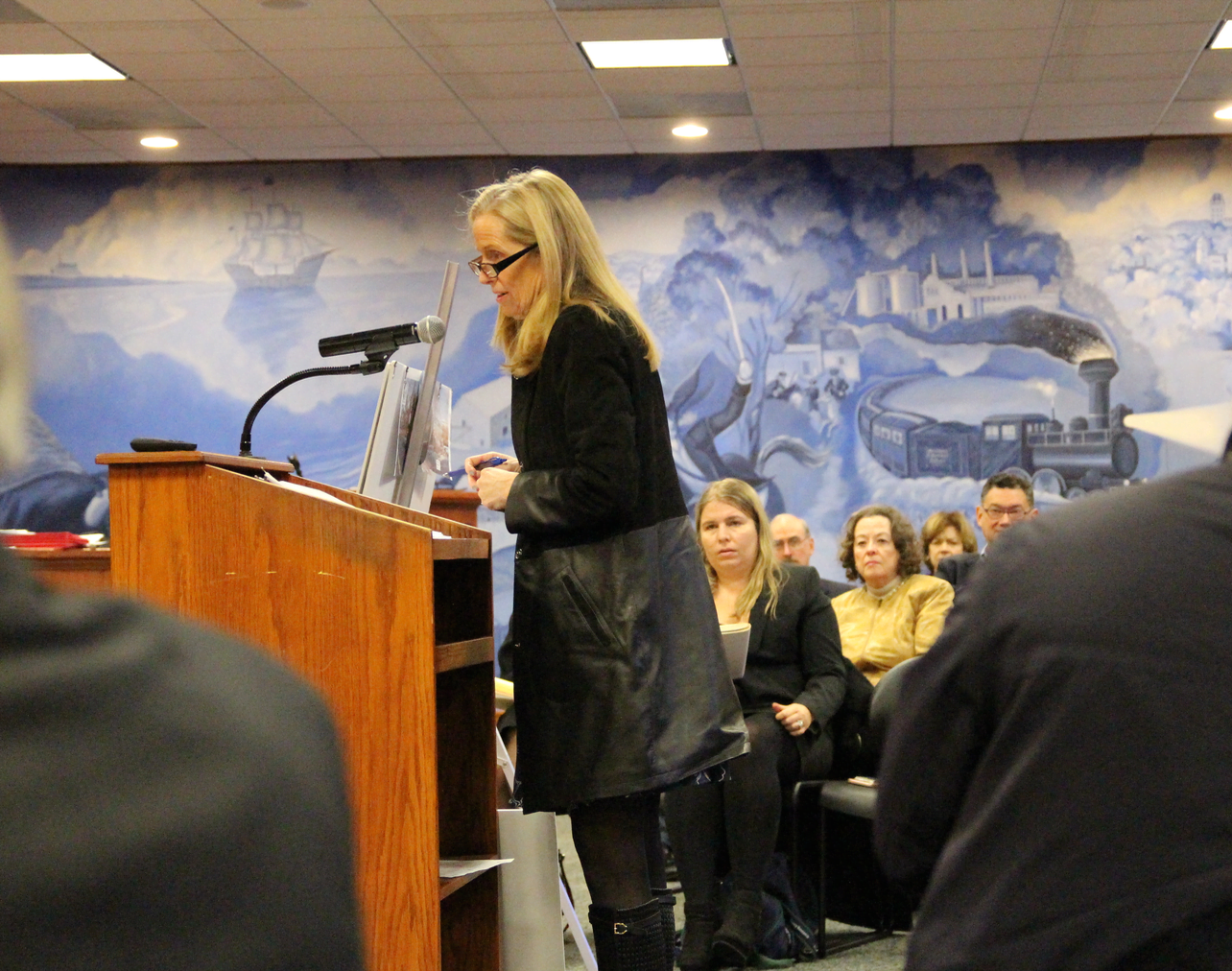 Back at the Feb 5 P&Z meeting there was an elephant in the room. 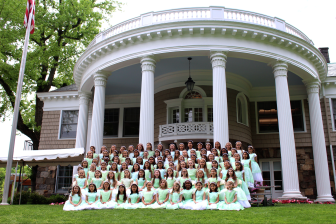 On February 5, Greenwich Academy Attorney Bruce Cohen and Head of School Molly King explained that the campus master plan includes demolishing 2 Patterson, the house neighbors refer to as “the ghost house” and 176 North Maple. After demolishing 176 North Maple the idea is to use that lot for parking 15 times a year and maintain it as grass. “P&Z is uncomfortable putting parking at 176 North Maple. We don’t let people park in their front yards. You said no more than 15 times a year, but the commission is concerned,” said acting chair Margarita Alban. Ms. King said the school was sensitive to being in a residential neighborhood. “We are working with the neighbors. Greenwich Academy hasn’t made a significant alteration to its campus for 20 years, and not to its lower school for nearly 50 years. We have to evolve and keep up with the trends in education.” The master plan does not forecast an increase in enrollment, but rather to add more small group breakout spaces beyond the classrooms, and a much bigger library. “We are absolutely behind on that. Interest in STEM has exploded,” King said, adding that contemporary learning environments feature flexible spaces for smaller break out groups. “We need to increase the number of gathering spaces.” The architect for GA, Ann Beha, presented a rendering of a new lower school that would replace the existing one. Commissioner Peter Levy said is was “imposing” and that the entrance appeared three stories high. “Wood and stone are a strong Connecticut vocabulary,” Beha said. “I’d like to think the building has a lot of energy and the students will feel pulled into it. I don’t think the height is imposing. The scale is realistic and the entire building has been designed with the involvement of all the lower school faculty.” The item was left open.

Greenwich Academy presented their campus master plan, which includes demolishing and reconstructing the lower school and expanding the upper school. The goal is not to increase enrollment but to add small group break-out spaces and a larger library to bring the school up to date.

But the school has no more FAR to expand.

The plan hinged on the ability to relocate their Cowan Center, which enrolls 60 children of Greenwich Academy and Brunswick School teachers, as well as “affiliates,” who are children of those private school families, and employees 18 teachers, to 96 Maple Ave, a historic house with an existing Historic Overlay that dates back to 1979 for residential use.

The plan is to also create two apartments in the upper floors of the house and merge the lot with 100 Maple, a flag lot behind 96.

Hence the elephant in the room on Feb 5.

Because the application for 96 Maple “closed,” but the commission had yet to take a vote, they stopped accepting public comment. Yet, discussion of the campus master plan was contingent on the approval of the move of Cowan Center to 96 Maple.

Acting chair of the commission Margarita Alban was a lone voice among the other members seated for the decision –  alternates Dennis Yeskey and Victoria Goss, Peter Levy and Nick Macri – when she expressed reservations about the application.

But, Alban said, she was stuck on the intent of the Historic Overlay. The previous owner received the 1979 Historic Overlay, and in exchange for preserving the historic 1910 house he was allowed to add a second unit to the single family house. Eventually, the house was illegally divided into four units and has four kitchens. But that was neither here not there.

“I got absolutely stuck on what is happening to the HO and can’t get past it to be honest,” Alban said. “The HO was created to be residential in 1979. The neighborhood was not purely residential at the time. At the time the HO was created it was somebody going into perpetuity with a property to preserve residential character. That was the intent.”

Alban said the residential character of the neighborhood should be respected. “I can’t get past that. I’ve tried, mightily.”

Alban said she was also stuck on the fact that the benefit of Cowan Center was being enjoyed by non-faculty children.

“If this application was modified and went forward, I would want to see it be only for the children of Brunswick and Greenwich Academy teachers, because that’s for whom this benefit was purported to serve.”

And that became the focus of compromise.

But first, the comments from the other commissioners.

Dennis Yeskey, an alternate seated for Andy Fox who was recused, was particularly vocal.

“Schools are the number one priority of this Town,” he said. “In 2009, we suggested schools go out and buy land. The Greenwich Academy campus is very tight. I was stunned. But we nevertheless want to give the chance to get more FAR on the main campus. The real issue here is FAR.”

“The school is 200 years old. …They have an inherent right to be in this neighborhood. …A lot of people don’t want these (historic) buildings. They (Greenwich Academy) want it and want to maintain it,” Yeskey added, referring to 96 Maple Ave, for which the school paid $2,800,000 in July 2018.

“I was impressed this building is being preserved as it is. Often times they’ll rip down the building or heavily modify it,” Yeskey said. “I’ve gone to the site three times and driven down the site for 44 years. It’s heavily trafficked. …It will not materially impact the neighborhood. I think I know what the word material means,” he said referring to the wording in zoning regulations.

“It’ll be a minimal increase in the traffic I don’t have an objection to that,” he added.

Yeskey noted that next door to 96 Maple is property owned by Brunswick School where there is an open parking lot for 50 cars and school buses right along the street and no landscape screening.

He said despite Brunswick being allowed to have parking along the street, he was not favorable to the 5 or 6 cars proposed to be parked in the front yard of the Cowan Center at 96 Maple.

As for exacerbating the heavy traffic, Yeskey said, “This isn’t like the traffic appeared yesterday. …And, a lot of the traffic is due to the lack of workforce housing. Seventy to 80% of people who work in Town have to commute to Town.”

“To the left is a hotel, with a very large parking lot on the street bordering this particular site,” Yeskey said, referring to the Stanton House Inn, which is grandfathered in and has operated since the 1940s as a bed and breakfast with 20 rooms.

However, he said, “This site does having parking in the front which I have a major problem with.”

“Regarding the site plan, there’s a change to the site, but nothing that significantly changes what’s happening on the street. They’re removing part of the driveway and putting in a playground. But you’d see a playground in a residential neighborhood anyway,” he said.

“Go up and down the street, it’s been developed,” Macri continued. “From the stop at bottom of North Street, it’s been developed. …There’s another early childhood education center at Second Congregational Church, the Woman’s Club, Stanton House Inn, the Brunswick administration building, and a medical office use building there. What I find interesting is  that, short of the Brunswick administration building,  everything has a residential scale to it.”

Macri said he also appreciated Greenwich Academy’s efforts to create a plan that would minimize the amount of traffic on site at 96 Maple, including their offer to provide a shuttle bus to faculty parents, as well as phased pick-up and drop-off.

Commissioner Peter Levy said he thought the application for 96 Maple was “very thoughtful.”

“Landscaping is important – not obstructing the building or making sure the building is has the ability to be appreciated from the curb – is preserved. I feel the traffic is not much of an issue,” Levy said.

“The unfortunate thing about any redevelopment of a facility in the neighborhood is there is this kind of creep where it goes from residential to a more commercial use. If this building flips over to a different use and you have more parking, that does effect the neighborhood because it is very mixed, and it’s just one more soldier down.” – P&Z commissioner Peter Levy

Commissioner Levy said he wanted to see the view of the house and streetscape preserved. “Putting a jungle-gym right in front of the house might not be appropriate. Putting parking in the front yard would also not be ideal,” he said.

Alban acknowledged other commissioners’ objection to parking in the front yard for 5 or 6 cars as a means to satisfy parking requirements.

Victoria Goss agreed with Mr. Yeskey, Mr. Levy and Mr. Macri. “It does not material effect the neighborhood because it is somewhat mixed already,” she said.

In the end the commissioners voted 4 in favor and 1 opposed (Mrs. Alban) on a motion to approve with the following modifications:

• Enrollment cap of 50 children (not 60), infants to children age 5, instead of the proposed 60 which would have included affiliate families. (The commissioners noted that the GA had said slots in the Cowan Center were offered as a “staff benefit.”)

• Remove and relocate the front yard parking, (which might not be necessary if there are only 50 children in the daycare instead of 60.)

• Tree protection plans be submitted by a licensed arborist, and additional landscaping around the playground for noise and to shield for neighbors to the south and west.

• The two residential units upstairs in 96 Maple be occupied by Greenwich Academy staff only.

• Sewer comments must be addressed prior to permit.

• The applicant shall provide samples of materials to the Historic District

• The slate roof be restored.

• If there is any change of use in future, the applicant must return to the commission.

After the vote, neighbors Doreen and Tog Pearson, neighbors on Maple Ave, said they were shocked and disappointed.

“I felt we presented a very cogent argument and they weren’t listening,” Mrs. Pearson said. “Ms. Alban and Mr. Macri are the only ones who are engaged.”

Mrs. Pearson said she was especially concerned about Ed Bloom a neighbor whose house at 94 Maple has no buffer from 96 Maple.

Pearson said everyone who testified in favor of Greenwich Academy’s plans had lauded the program at the current campus, but said nothing about how locating the program  at 96 Maple Ave location would impact the neighborhood.

She questioned whose interests were paramount: the taxpayers in the neighborhood or private schools, who are tax exempt.