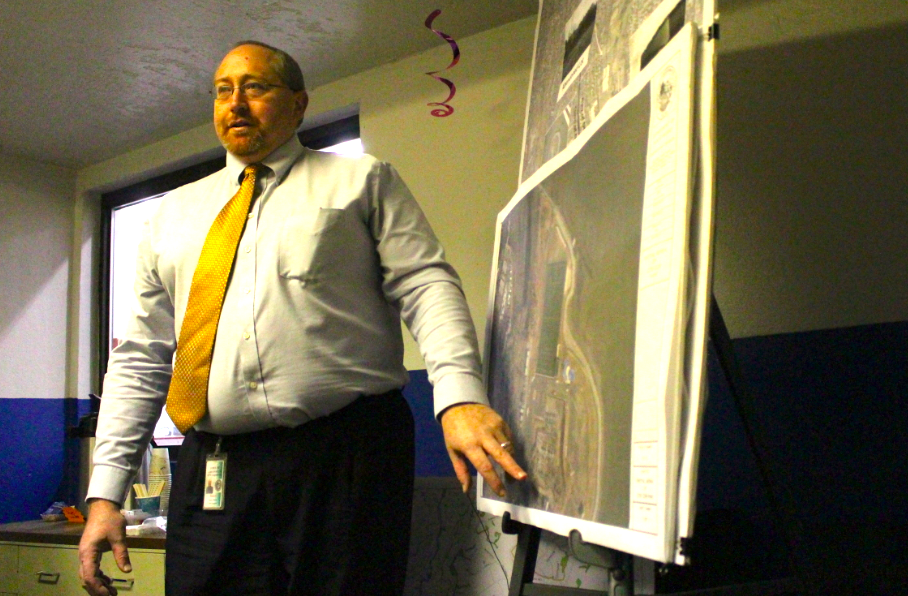 Update: At the February parks & Rec meeting at Town Hall Wednesday night (Feb. 25) Joe Siciliano said the ribbon cutting for the new Cos Cob park would likely be delayed until at least the end of March. He said there is so much snow and the parking lot there hadn’t even been plowed. Greenwich Free Press will update the story with a firm date when it is announced.

Mr. Michel said the new park, located on the former power plant site, is set to open tentatively on March 2, and will be marked with a ribbon-cutting ceremony.

Mr. Michel presented a poster sized aerial photo blow-up of Cos Cob park, which, he said was provided by CL&P, who are doing a nearby project. The most visible portion of the photo, which was taken on Dec. 23, is the new, artificial turf field.

The park will also contain parking lots and a full playground with a rubberized surface. There are also paved walking path that total almost a mile.

Mr. Michel listed other features of the park, including a rest room building, open air picnic area, an open air pavilion and an ampitheater with stadium seating for about 80 people. The ampitheater is built out of retaining walls and and landscape pavers. “It’s something they could use if they were using the field to have trophy presentations,” Mr. Michel said.

The park is almost complete, according to the chief engineer. All that remains is some landscaping, which will be possible to install when the weather warms up a bit.   Mr. Michel described the new park as “a great facility.”

“Everyone who has looked at it has said it has the best views of the Sound, because it’s pretty high… It’s about 40 ft above the water,” Mr. Michel said.