On Friday morning residents and commuters got an eye full of what appeared to be local campaign signs.

Closer inspection revealed the red signs advertised the team of “Trump/Camillo,” not exactly a team of local candidates.

At the foot of the lawn sign where an attribution might otherwise go is a website www.FredCamillo.com, which links to a website CitizensforTrump. (By the end of the day some people said the website no longer links to CitizensforTrump, but as of Friday night at 8pm it is working for this reporter.)

The first item on the Citizens for Trump website is a video titled Trump Rubberband Man 2020.

Further down the website there are embeds of Donald Trump’s Tweets and Tweets from America’s Voice News, where Greenwich’s Carl Higbie worked until recently as a talk news host.

The Republicans scheduled and then cancelled a press conference at noon.

Fred Camillo, the Republican candidate for First Selectman, whose running mate is Lauren Rabin, said in a text, “This is a new low for Greenwich. It is desperate, dirty and fraudulent. It is time for Jill Oberlander and Sandy Litvak to disavow not only the signs, but all the emails and rhetoric that are coming from the Greenwich chapter of this national Indivisible group that is using our town as a platform to push a national agenda.”

Jill Oberlander replied saying, “I saw the signs this morning as well and I just assumed they were put up by or in support of the Camillo Campaign. They certainly are not connected in any way shape or form to my campaign or to Sandy Litvack’s campaign.  Mr. Camillo, by his comment, again seems to be creating another false narrative to mislead Greenwich residents.  If they aren’t his signs, he should disavow them, their sentiment, and take them down.  These signs, and his finger-pointing, create unnecessary divisions in our community.”

Democratic incumbent running for another term as Selectman, Sandy Litvack said, “Neither I nor anyone associated with me or my campaign knows anything about these signs or who posted them. We did not. If Fred Camillo objects to them because they are untrue he should simply say so; if they are not untrue, there is nothing for him to complain about.

“I would add that while I do not know who is responsible for the signs, this is, unfortunately, consistent with other actions we have seen recently, such as producing and distributing a doctored video, touting false endorsements and issuing misleading campaign material.  But, without all the facts regarding who is really behind  this caper I will make no accusations,” Litvack continued..

Swomley and Pierson went on to say, “He voted for Trump and expressly embraces many of Trump’s policies. Why does he think the signs are ‘a new low’ if he likes Trump? We also don’t know what he means by ‘using the town to push a national agenda.’ Our agenda is to protect our democracy and people from authoritarianism. This agenda is only controversial to those who don’t see anything wrong with Trump’s undermining of our Constitution, the Rule of Law and our Democratic values.” 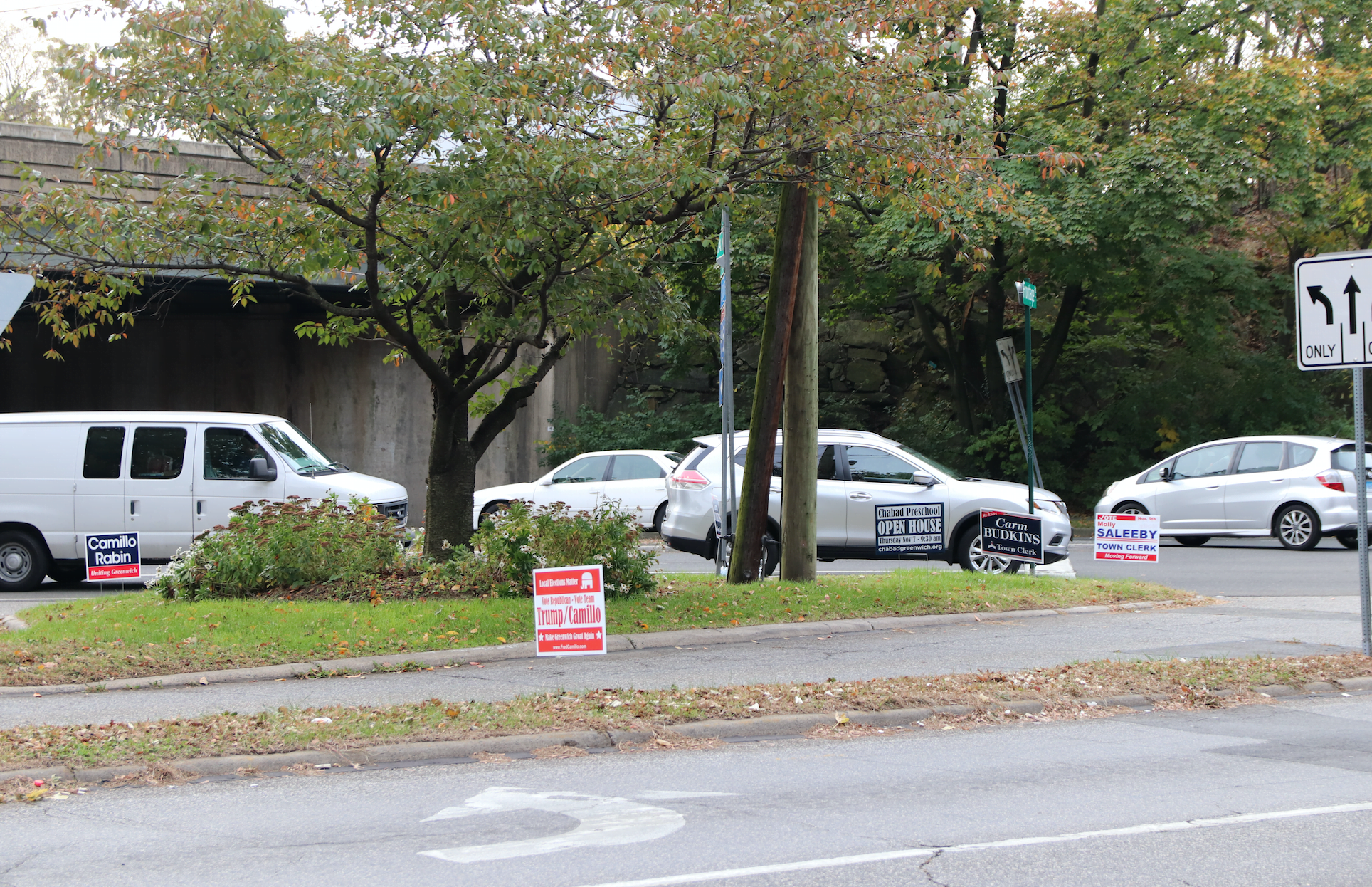 On GFP Facebook 100 comments were posted on Friday responding to photos of the signs.

Jessica DelGuercio who created Camillo’s FredforFirst website tagged GFP on Facebook with a photo of one of the signs, and a comment saying Camillo is being “bullied by the LEFT,” adding, “A party does NOT define a person.”

Cathy Dillon wrote, “Perhaps it was a gift and show of support from Trump and the RNC.”

Gina Librandi wrote, “Greenwich is already great so thanks but no thanks …to the Camillo/Trump signs.”

Betsy Kreuter wrote, “I guess if Fred agreed to the signs, I would have no problem with them.”

Nick Catino wrote, “Get rid of all the signs, it looks terrible, especially near the Lake Ave circle.”

That begged the question whether the signs are considered campaign signs, which are protected speech.

Email to zoning inspector Jodi Couture was not returned, but in the past he has said, “We do not regulate the election signage. Couture added that for the most part, campaign staff take their signs down following the election. “But we would pick up the stragglers,” he added.

Claudia Triana wrote, “…If what Mr Trump is doing is indeed great, then the Camillo campaign should have no problems with a Good Samaritan-Trump supporter backing their campaign with free advertising allowed by the Town that cheers on the president.”

Laurie Novakowski posted, “probably that the lefties who committed this crime are disgusting and will stoop to any level they can to win.” And, “there is no way in hell that anyone from Fred’s side would waste their time and money on these signs. Jill is the one whose poll numbers are down. She’s desperate and I can’t wait for November 5th to see her go down. This is an absolute attack on Fred. But you know all this already.”

Donna Vitti Curtis wrote, “Nasty, dirty politics. Republicans put them up (with or without telling the campaign) and then accuse the opponents of playing dirty. It gets press and attention, makes the trumper/trumpettes happy because they want a MAGA candidate, and casts aspersions on the opponent’s campaign and tries to discredit them. Disgusting. Thankfully the majority of Greenwich is smarter than this and won’t fall for this obvious trick.” 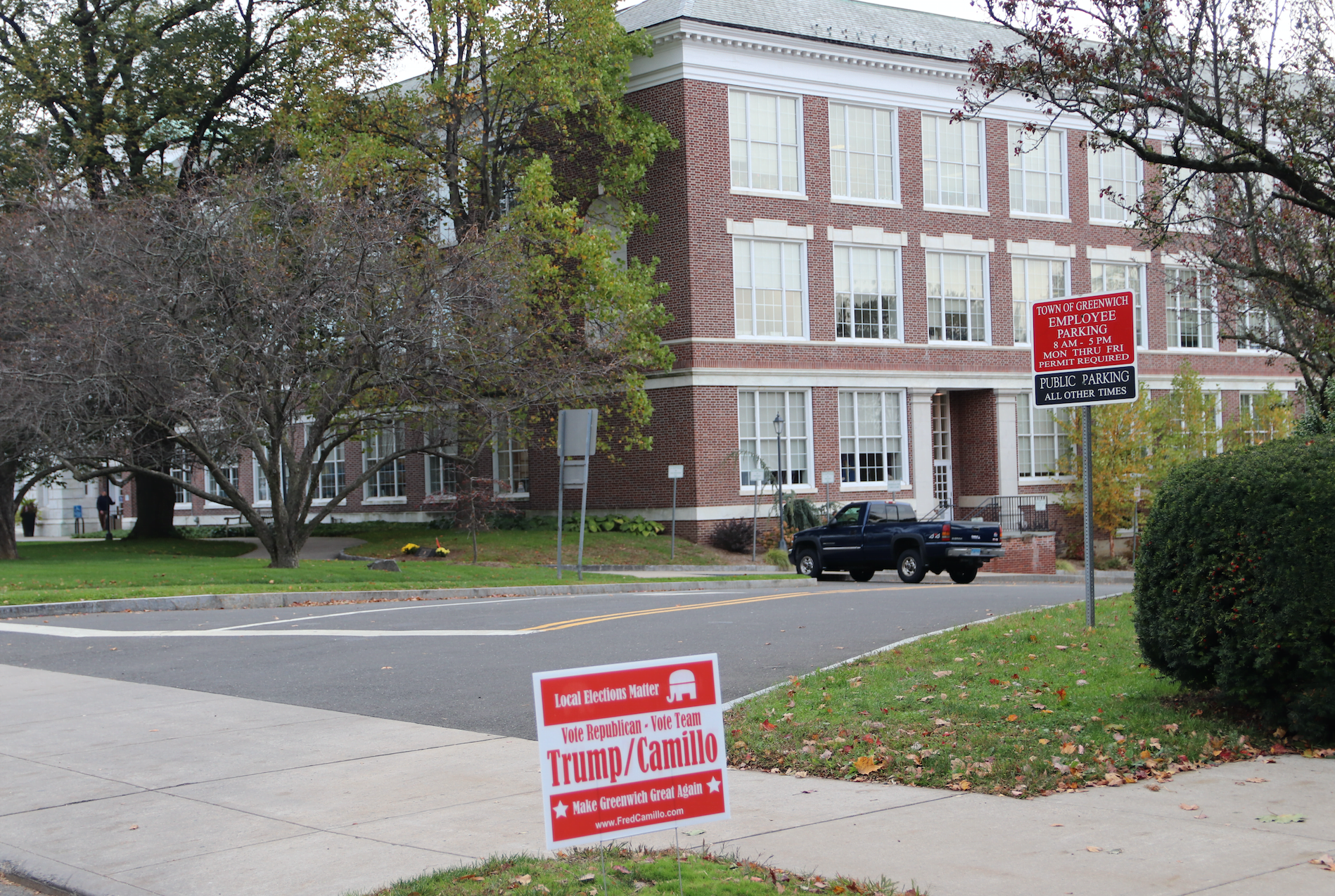 Frank Rogers Replied, “Good luck with that and you better believe the majority of Greenwich is smarter than you. Thanks for supporting a campaign fraudster and her team of complicity.”

Marina Rosin Levine of Indivisible said in an email, “Me thinks Mr. Camillo doth protest too much. …We are a Trump resistance organization. Why would we invest in signage to support Trump? Mr. Camillo has premanufactured outrage about signs linking him to the president he voted for…Signs are everywhere and so are security cameras.”

On behalf of the RTC, Rich DiPreta provided a statement:

While all Americans are entitled to free speech they are not entitled to make it appear as if their free speech is coming from another person. These signs do exactly that.  This is why these actions are outrageous and disrespectful to the political process in Greenwich.

This type of divisive behavior has no place in Greenwich.  It is not who we are and not who we have ever been.

I am proud that Fred Camillo and Lauren Rabin have run a positive campaign talking about local issues that impact Greenwich residents each and every day.  Just look to their campaign slogan – “Uniting Greenwich.”  That’s what Fred and Lauren will do.  It is now more than ever where such leadership is sorely needed in our town.”

On behalf of the DTC Joe Angland provided a statement:

“Neither the DTC nor Jill Oberlander, the Democratic candidate for First Selectman, had any involvement in the signs that appeared today linking Fred Camillo to Donald Trump.  Given that the signs explicitly ask people to “Vote Republican”, it appeared that they were created and posted by Republicans.

We now understand that Mr. Camillo and the RTC deny any knowledge of the signs’ origin.  One possibility is that the signs were created by a supporter of Donald Trump who believes that associating Mr. Camillo with Trump will help the Camillo campaign.  Another possibility is that someone wanted to lead people to believe that Democrats had created a fake sign, damaging Democratic candidates at the polls.  We hope that the source of the signs is identified and is subject to the appropriate legal remedies.

We have seen comments on social media and elsewhere attributing these signs to Democratic candidates, without a shred of evidence.  Such accusations are scurrilous.  Our candidates have focused on the issues during this campaign.  They have not resorted to trickery, and they condemn those who do.” 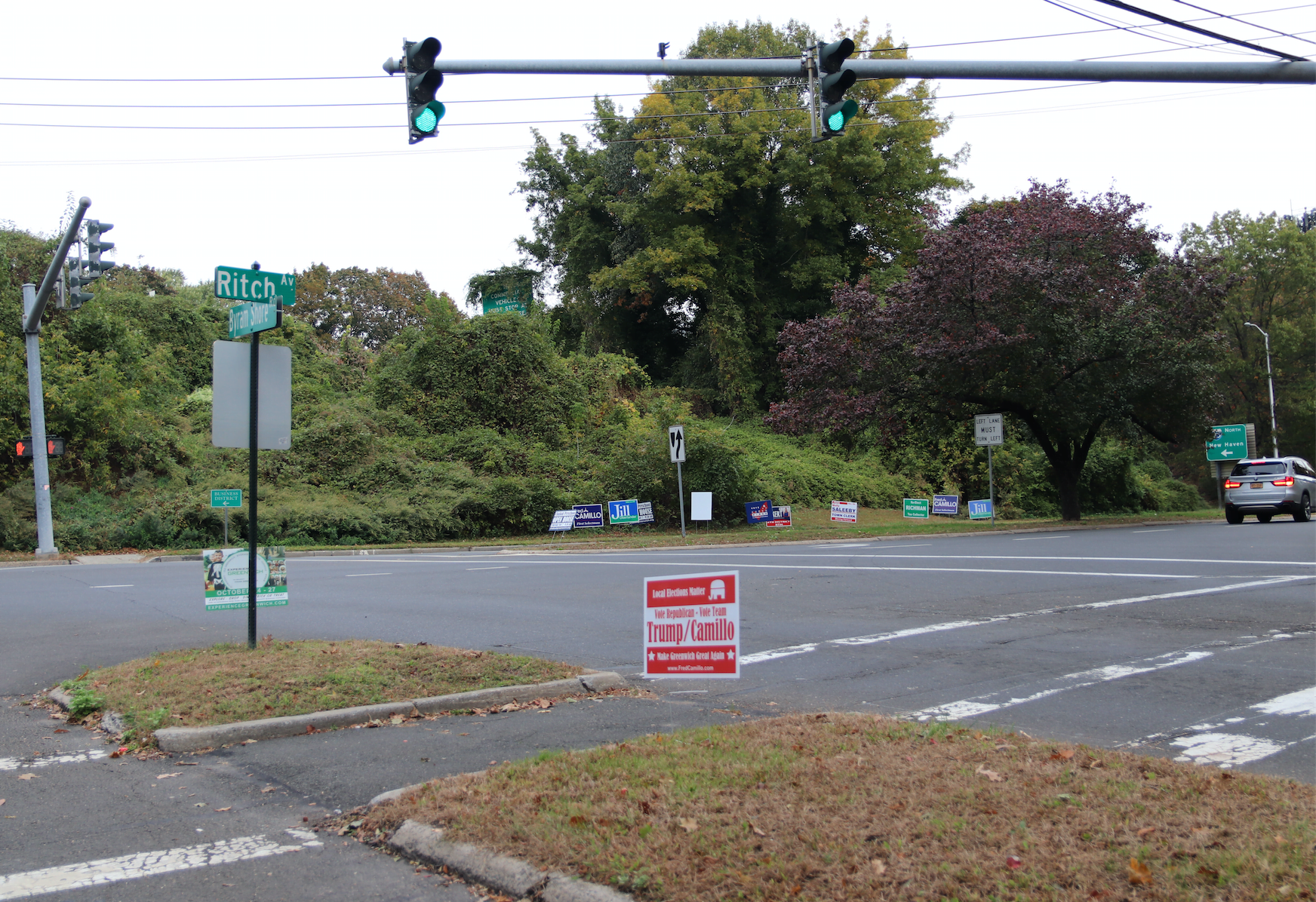 So, who is behind the signs?

By phone RTC chair Rich DiPreta said he would also like to know but added of FredCamillo.com, “This is not Fred’s site.”

A call to Go Daddy indicated that both www.FredCamillo.com and CitizensforTrump have paid for privacy protection. (Just search https://www.godaddy.com/whois). So we don’t know who owns either website.

Some clues are available online at the Wayback Machine, a non profit launched in San Francisco in 2001 by the Internet Archive.

Wayback Machine crawls websites on the internet and takes snapshots over time. They’ve taken 187 snapshots of GFP since 2014!

Wayback Machine allows users look up a website and view the snapshots over the website’s history.

We went to web.archive.org and put in FredCamillo.com. The Wayback Machine had crawled it six times since since 2011. The timeline begins in 2011.

Four crawls in 2013 and 2014 redirected to http://fredcamillo.wordpress.com which is still active. 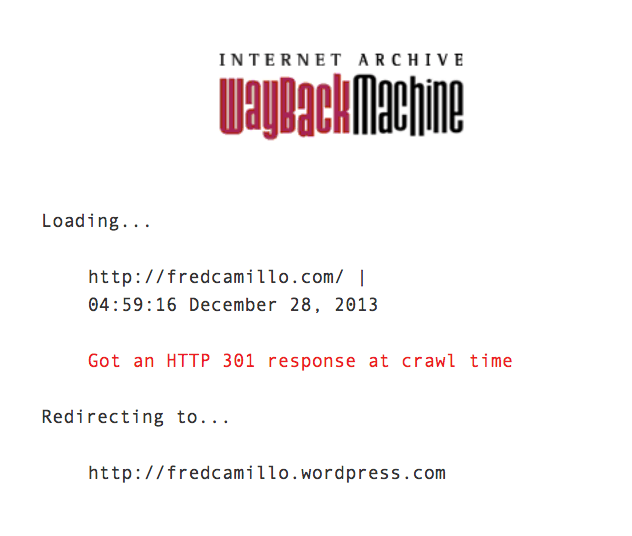 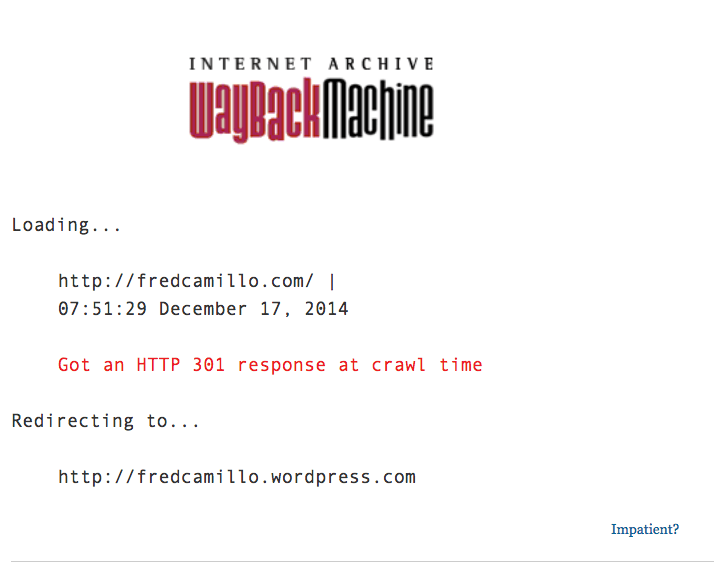 Go Daddy explained that when a domain expires, it goes to an auction or  a “back order,” akin to a raffle ticket because no one gets priority for it. Each registrar (Go Daddy is a registrar) allows one customer one back order.

Back ordering a domain means placing a bid on a domain name that you want for your website but is already owned by someone else.

When the original owner of the domain FredCamillo.com let it expire, it became available to the public after a 75 day waiting period, which Go Daddy likened to purgatory.

This time FredCamillo.com, under its new anonymous owner, redirected to www.fredforfirst.com.

That’s where the clues end. 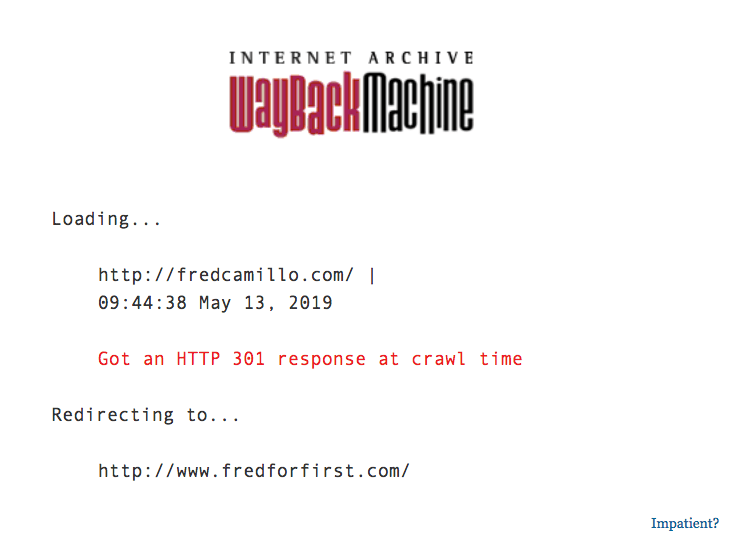 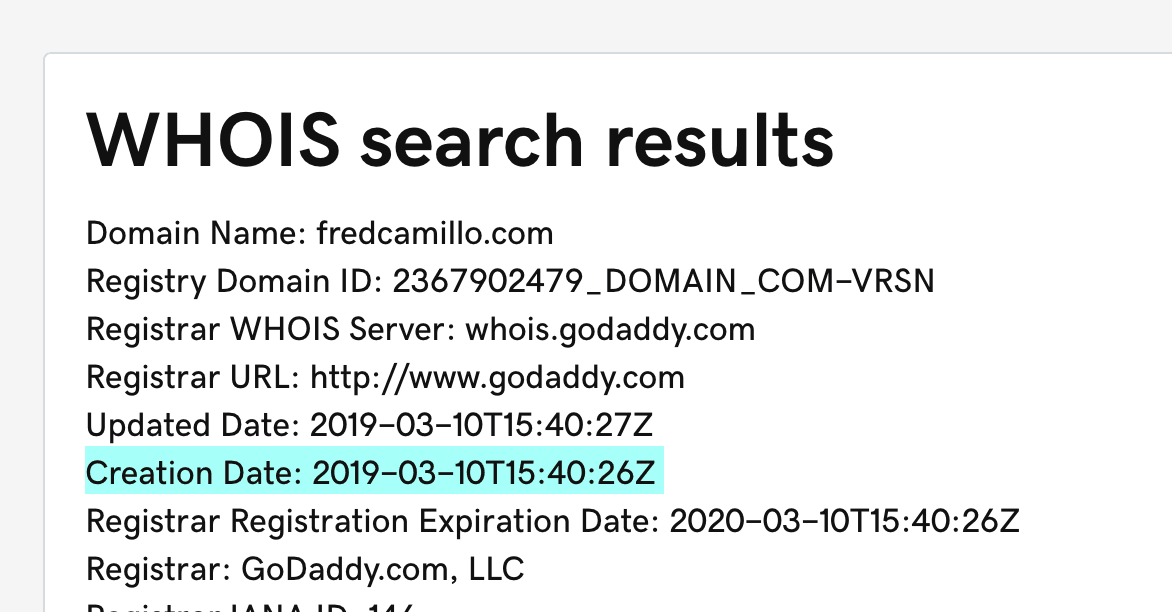 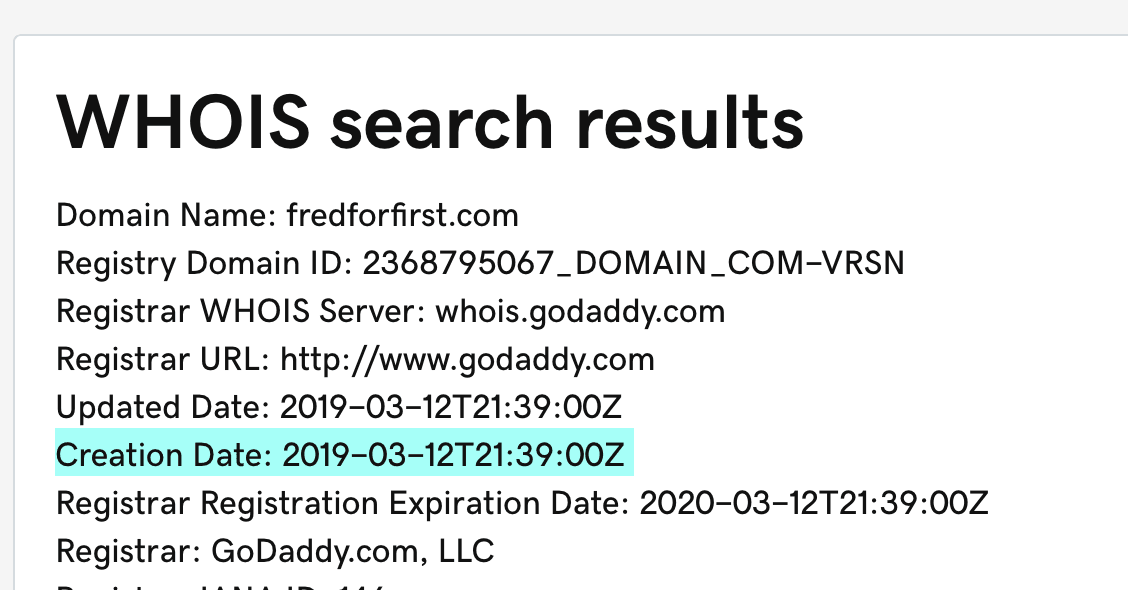