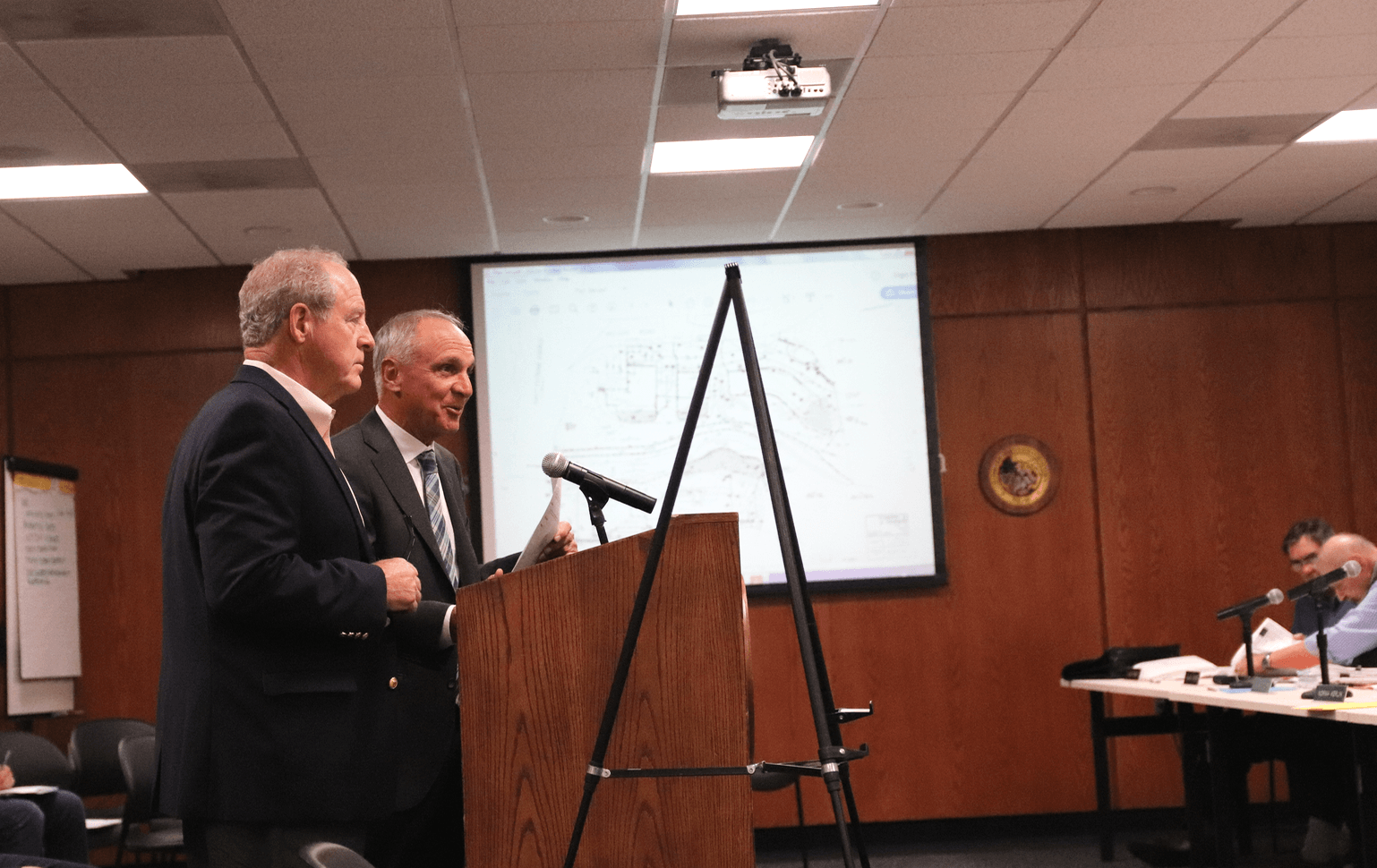 On Monday at the Inland Wetlands and Watercourses meeting, John Tesei, attorney for  Milbrook Crossing a devlopment proposed on East Putnam Avenue, requested a continuance of the hearing.

Mr. Tesei said at the previous meeting, a great deal of information was requested, particularly the highly detailed hydrology report from engineer Tony D’Andrea’s office. “I’m not even sure if the October meeting will be appropriate,” he said.

At the August meeting, director Pat Sesto said she had significant concerns with the proposal.

She said the application underestimated the extent and frequency of flooding and threats to aquatic ecosystems.

This week the agency agreed to another continuance, but did let members of the public comment. 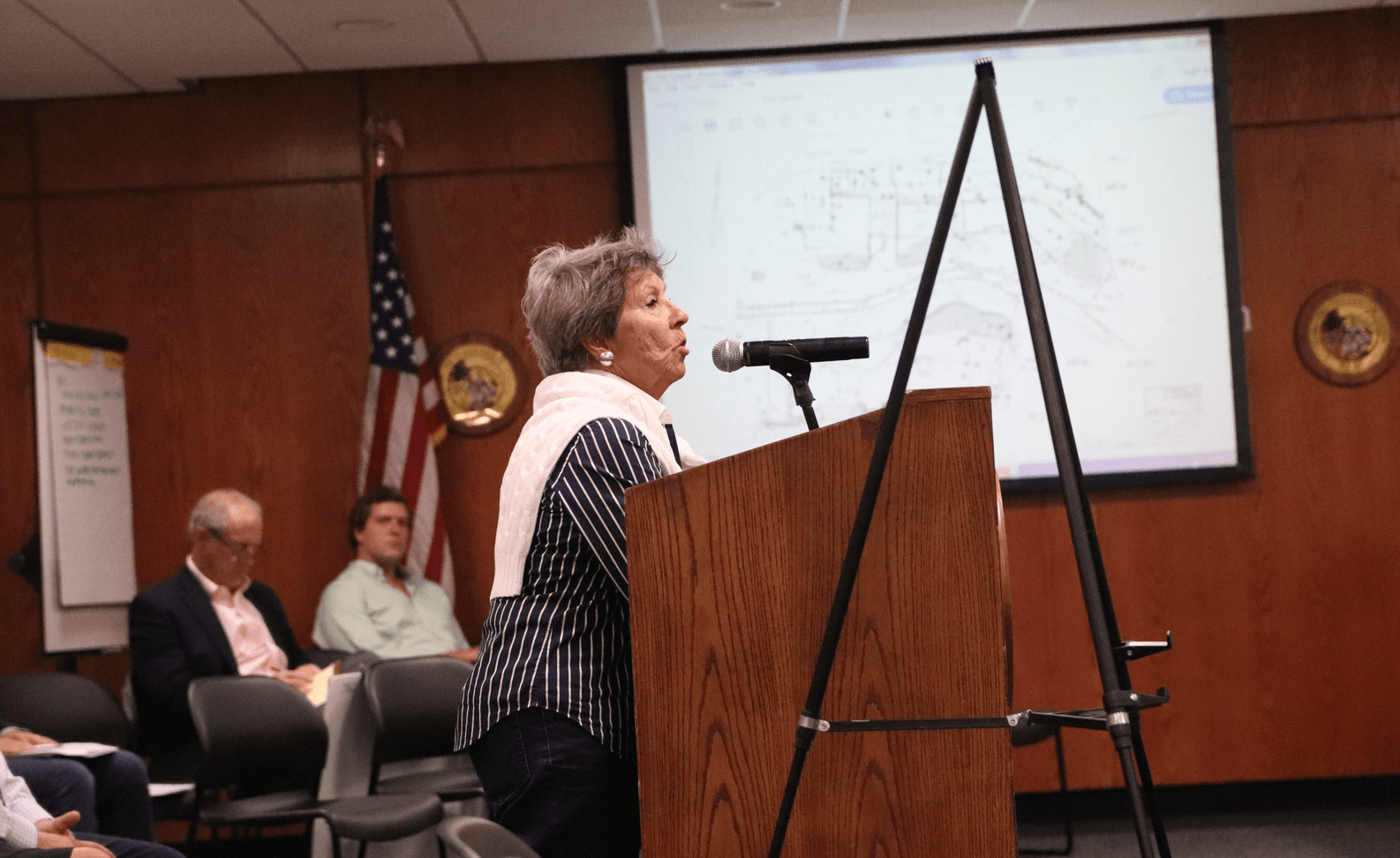 Susie Baker said she’d seen the Milbrook Crossing presentation and was thinking it’s a place she’d like to live.

“It would appear that the builder maintained more open space than could be developed on this property because it is in commercial zoning, something far more disastrous could occur here in terms of number of residents and loss of open space,” she said.

The idea for Milbrook Crossing is to appeal to residents who are downsizing. Units will measure on average about 2,000 sq ft, and priced at roughly $2,000,000.

The application is being submitted under the regulation for Historic Overlay, which incentivizes historic preservation by offering bonus FAR (which is not being sought) and extra units, which are being sought. 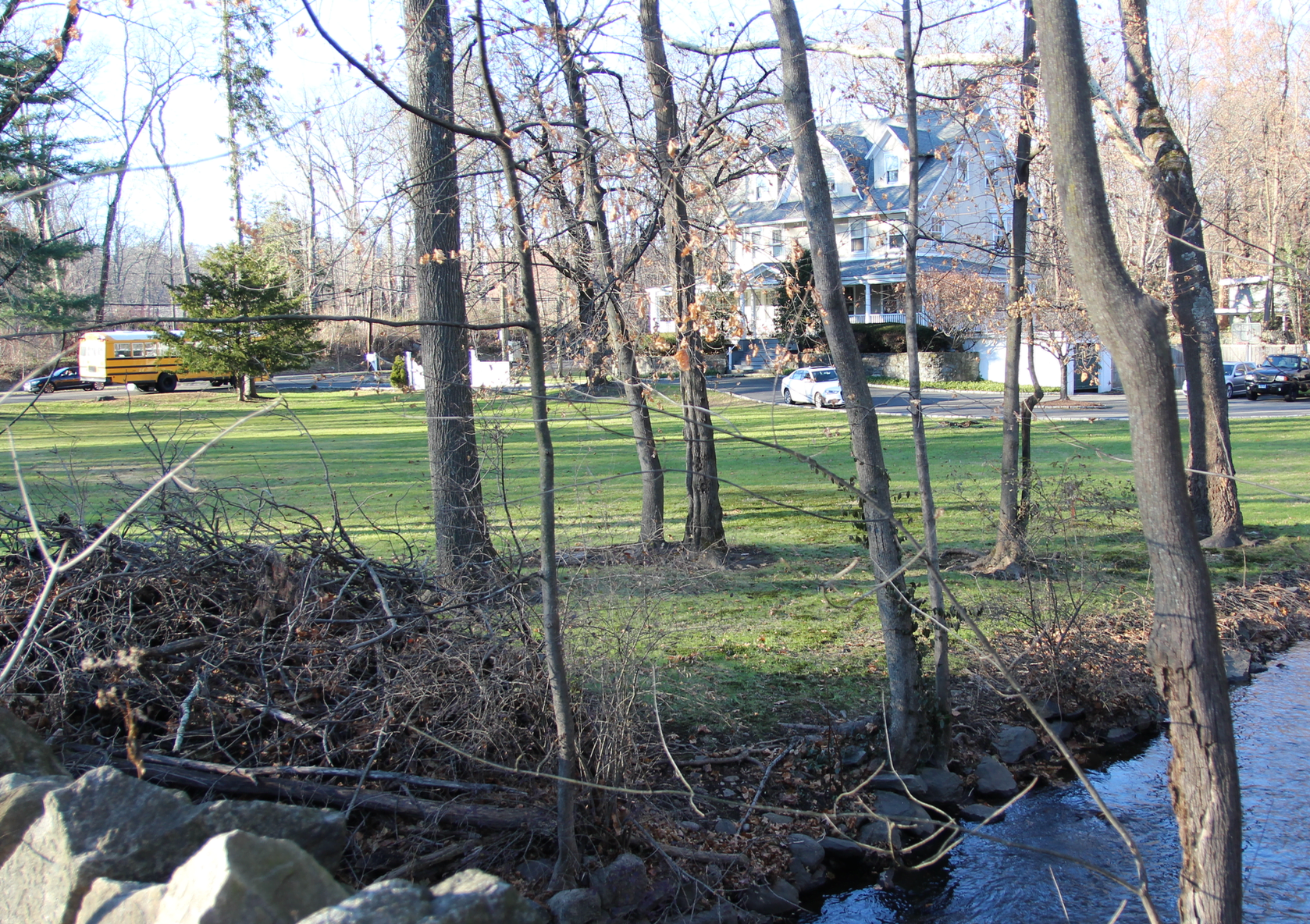 The house at 3 Hillside faces East Putnam Ave. School bus in distance on Hillside Road is headed to GHS. The large Colonial Revival house at 3 Hillside Road, designed by J Edward Sidway, dates to 1909. Situated at the fork of East and West Brothers Brook, once the location of a cider mill that processed fruit from orchards to the north, the house with its Tuscan-columned front porch originally sat on 2-1/2 acres, but was subdivided in the 1950s to create the parcel at 7 Hillside Rd. Dec 7, 2018 Photo: Leslie Yager

Hull said the property might otherwise be developed with a nursing home or a moderate income dwellings.

She said the proposed landscaping would be “outstanding” and praised Mr. Franco’s projects to date including the former Ole’s boatyard.

“From a totally rundown building and dock yard circa 1830, it is now a charming remembrance of things past, housing an art gallery, a rented apartment and a boatyard,” she said.

Mr. Franco has also preserved the former Harbor House Inn as a six unit condominium development. As co-founder of the Greenwich Point Conservancy he was instrumental in the restoration of the Innis Arden Cottage, the Old Barn and the Feake-Ferris House, which is the oldest house in Greenwich. 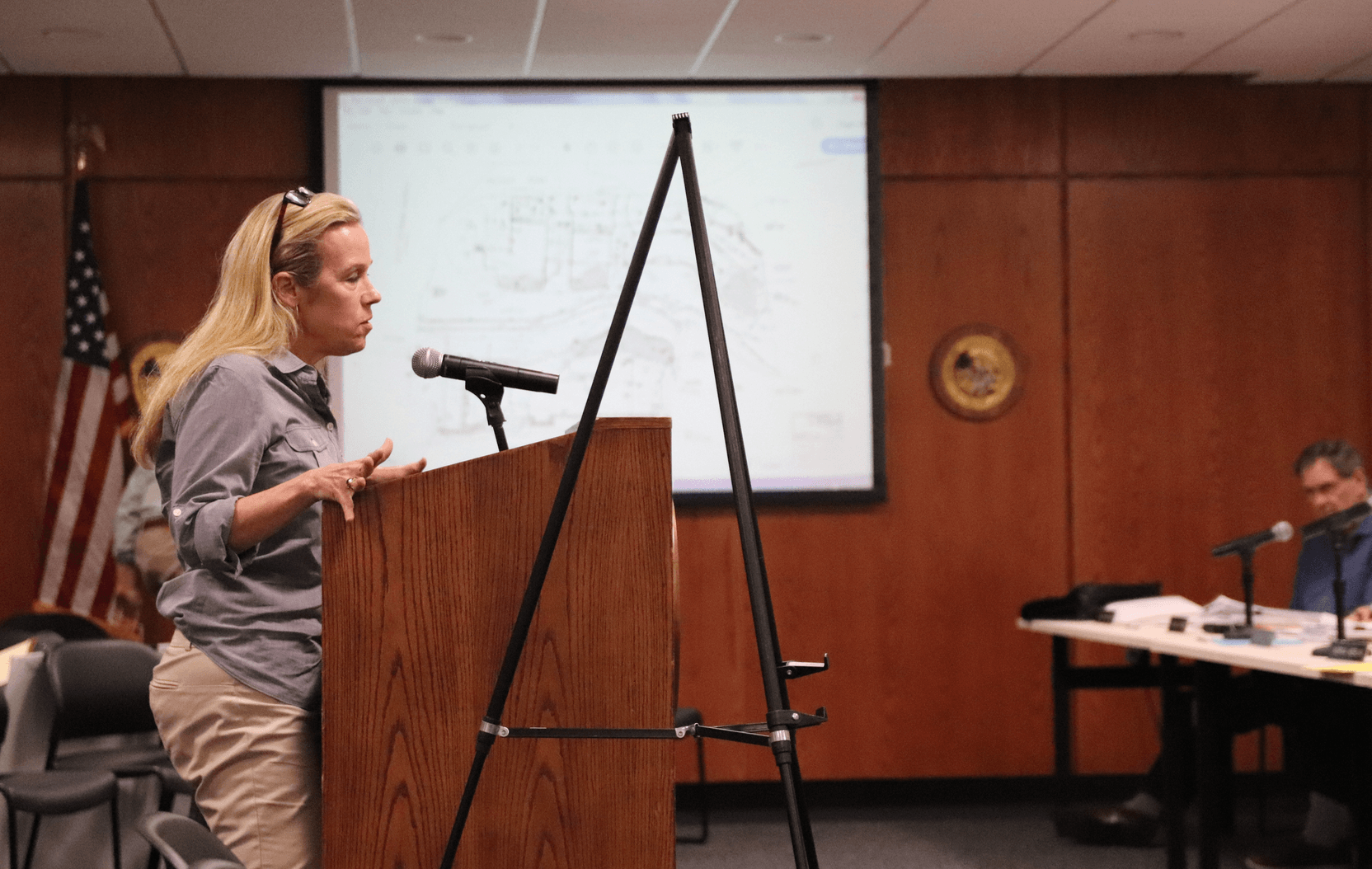 Elizabeth Dempsey, a neighbor of the proposed Milbrook Crossing development who lives on Hillside Rd said after 20 years she knew what it is like to live in and own property in a floodplain.

“Someone also has to care about the contamination and back flow onto our properties,” Elizabeth Dempsey, Hillside Rd homeowner

“We spent many a time when my boys were younger rafting when that floodplain gets going. It is truly an education that helps me understand tsunamis and the power of water,” she said. “There were times I was literally in 8 feet of water in my own back yard in a rushing river and had to hold onto a tree when I fell off a raft during our raft races. I know you received some pictures and video.”

“I am concerned about adding impervious surfaces,” Dempsey added. “I live across from Greenwich High School and we all know about the water diversion and contaminants in that area. There is concern about whether those contaminants migrate.

“We have done so much to manipulate that property and the wetlands,” Dempsey said. “I know with climate change, FEMA reports have to be backwards looking into history for its standards.”

She said there are coastal resiliency efforts and mapping along the coast to anticipate what will happen with storm surges and water level rising the 20 inches.

She said that while she loved the idea of historic preservation, she was concerned about back flow coming onto her property considering the history of both contamination and flooding, along with increases of impervious surfaces and cars over the years. 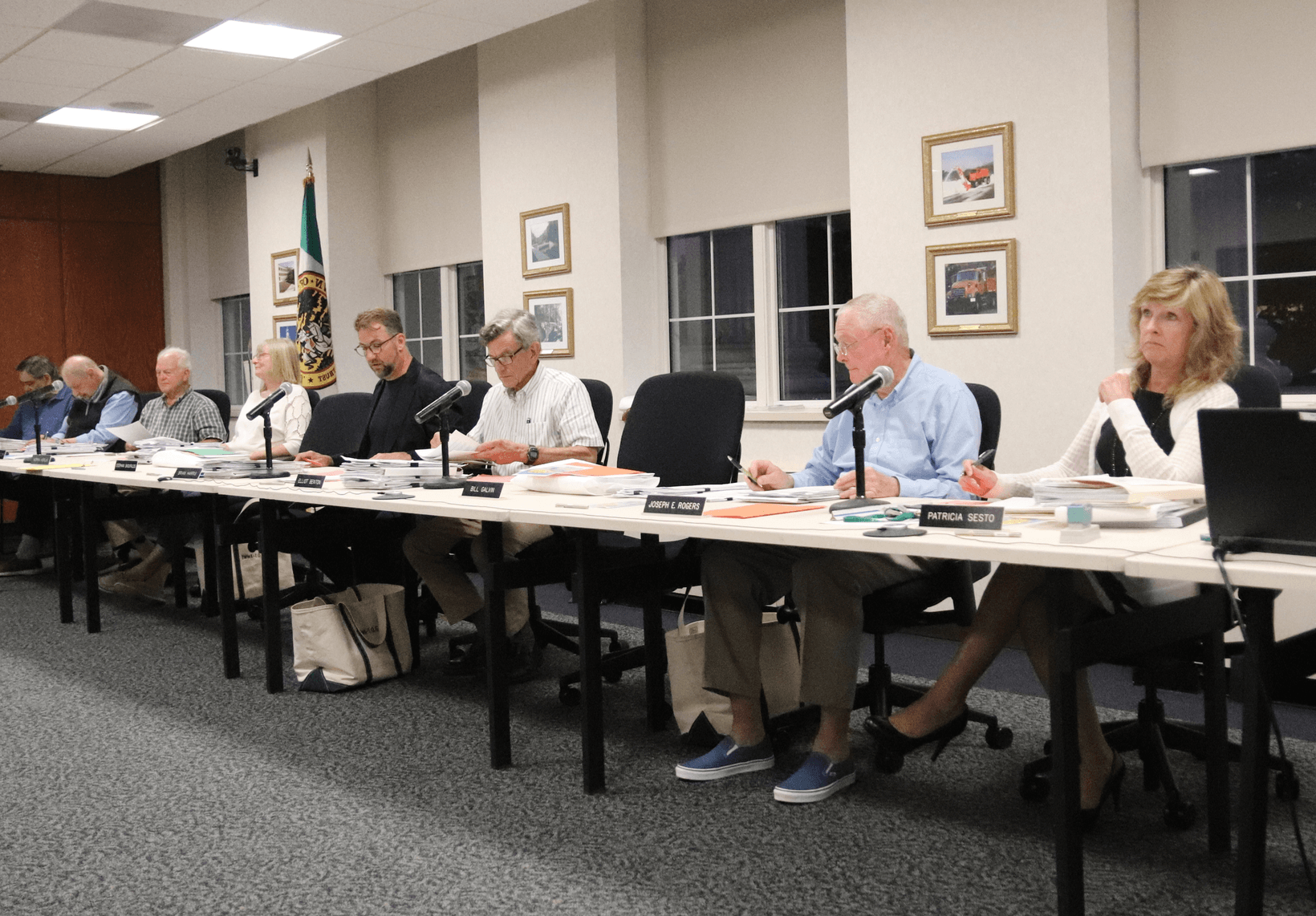 Chris Franco said he considered himself an environmentalist and conservationist, and had directed the professionals on the project to approach it with the highest possible sensitivity to environmental factors.

“I have a huge amount of respect for the neighbors’ concerns,” he said, adding that he had carefully listened to reservations from staff and Wetlands director Patricia Sesto.

“Our goal is to avoid disturbing these sensitive areas and preserve them in their natural state,” he said.

Mr. Franco said he did not consider himself a developer, but rather a resident with a passion for historic preservation and adaptive reuse.

He said in addition to co-founding the Greenwich Point Conservancy he was previously a member of the Town Conservation Commission.

“We have a great deal of experience working with historic restoration in sensitive areas,” he said, noting the Greenwich Point Conservancy projects are on Long Island Sound. 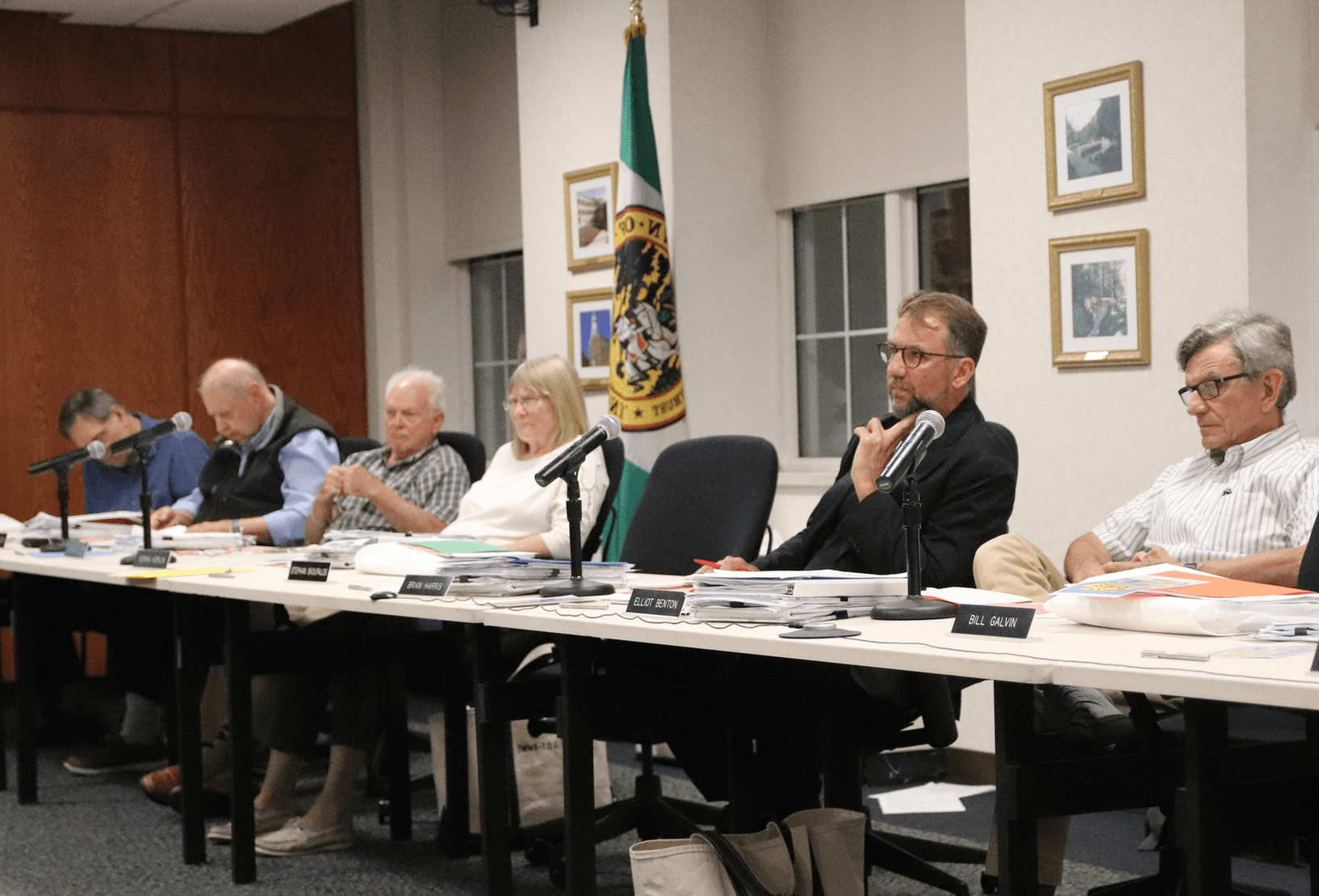 “We’ve been successful with our projects and have done them under great scrutiny because when you do things down at Greenwich Point everybody’s watching,” he said.

He said Milbrook Crossing preserves a group of architecturally distinguished 20th century houses and a historic streetscape in the heart of Greenwich.

“Many people doing projects in Town today try to max out FAR, but we think less is more in keeping with the site,” he said.

All  the parking would be located below grade, and recognizing that underground garages could flood, there is a plan in place so vehicles can be moved to higher ground.

“Most of the coastal development in Town today, where houses have to be raised, it’s permissible to have parking below the housing in flood zones.

…Residents would be alerted to potential flood events and have the opportunity to move cars to higher ground.” – Chris Franco on parking at Milbrook Crossing

He said the development would not disturb wetlands but they propose to clean up a portion of the wetland by 505 East Putnam, which Mr. Franco characterized as having been a dumping ground. “We’d remove the junk there and remediate it,” he said.

The second goal of Milbrook Crossing is to restore, enhance and adaptively reuse the row of historic houses to reflect a specific time in Greenwich’s history.

He said the draft of the 2019 POCD cites these properties as a priority for preservation, and that both the Milbrook Owners Association and Greenwich Preservation Network endorse the project.

Franco said there are neighbors who have indicated support, but two immediate neighbors to the north have shared concerns with Wetlands.

The Historic District Commission approved the project unanimously, issuing a certificate of appropriateness, which is a prerequisite for getting approval under Historic Overlay.

Since the earlier renditions of the project, the applicant has eliminated a vehicle bridge that would connect the 2 parcels on either side of Brothers Brook, and a portion of 505 East Putnam Ave that encroached into the flood plane. Also a  rain garden at 505 was  removed in response to reservations of Wetlands staff.

“We also understand there are challenges and we think our plan is really the best of several possible alternatives that could be developed on the site,” Franco concluded.

He added that Putnam Hill National Register District seeks to extend from Old Church Rd to Indian Field Road on both sides of Putnam Ave – including the Milbrook Club’s golf course on the south side, and the GHS campus and historic houses that would be part of Milbrook Crossing on the north. 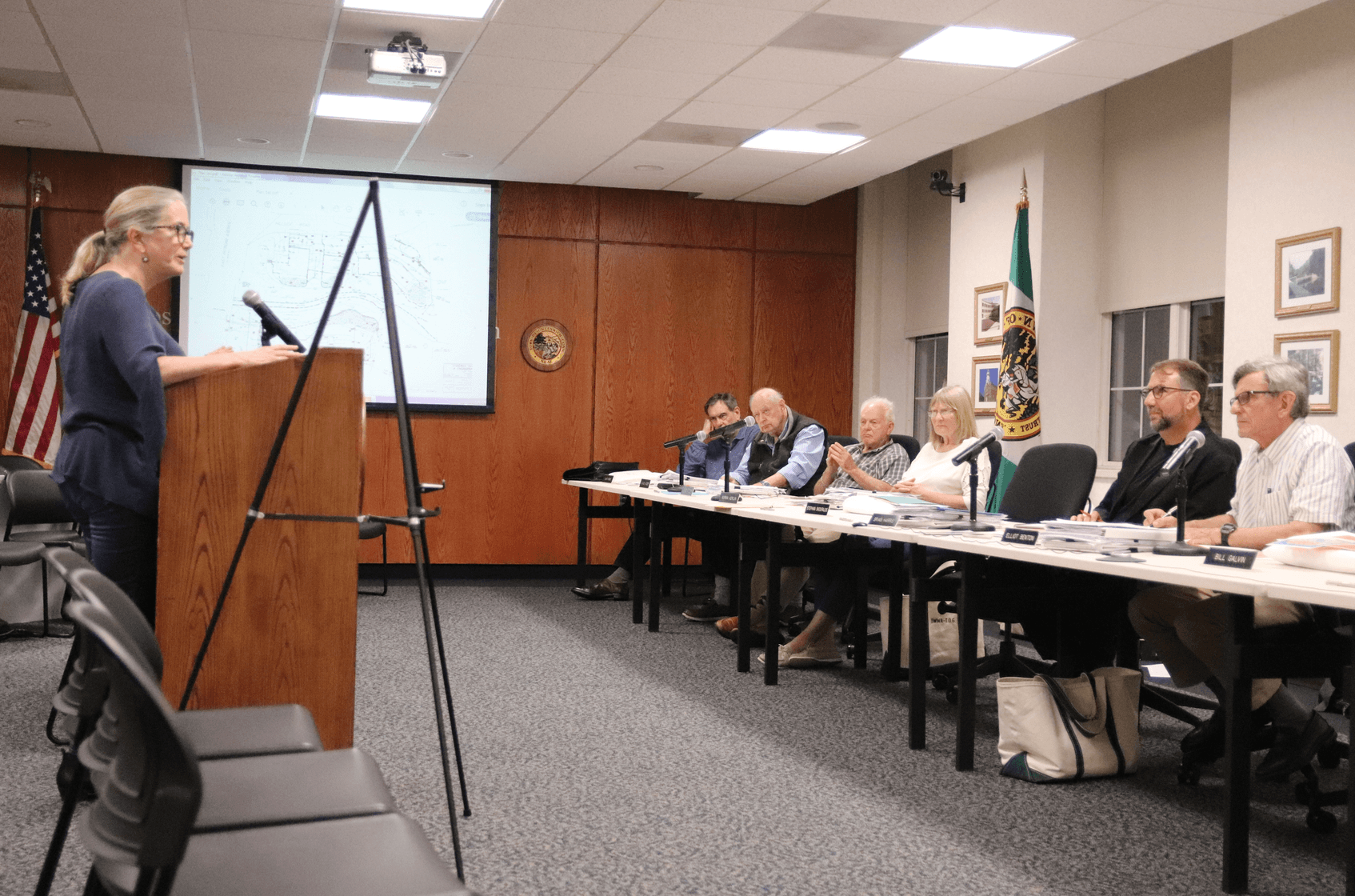 Jenny Larkin of 3 Hillside Rd, one of the houses that would comprise Milbrook Crossing, said she had received multiple letters from an organization that builds assisted living facilities.

She said when GHS was constructed, (the school opened in 1970) there were no regulations and that felt unfair that after decades of rapid development and increases in impervious surface, development on her property has to meet such high standards.

“It was a lake – a swamp – they brought in tons to fill the wetlands,” she said of the GHS campus. “Why did everyone let all that other stuff go on? Jenny Larkin and her historic house built in 1908 deserves a little respect,” she said.

Larkin said her house is virtually unchanged since before the Post Road was paved in 1914.

“Greenwich Country Day School expanded and added staff housing that covers so much impervious surface at the top of the Brothers Brook watershed that two years later we had our biggest flood ever,” she said.  “But is that their problem? No, it’s my problem.”

“Time, water and climate change happened. …The traffic isn’t the fault of this project. The problem is coming from upstream. The flooding is coming from them, upstream.”