On Thursday, August 10, a Venezuelan non-profit group, Venezuela Somos Todos-Mundo, will have a table in the Greenwich Town Hall lobby seeking to gather signatures asking the International Court at the Hague to initiate an investigation into what they say is government sponsored torture cases in Venezuela. 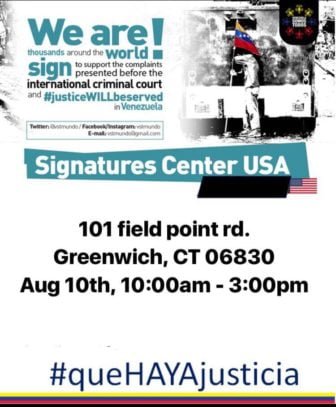 In recent months the already difficult economic and political situation in Venezuela has escalated to a humanitarian crisis following Venezuela’s controversial election.

Last week, Venezuelan President Nicolás Maduro threw down the gauntlet after US President Donald Trump referred to him as a dictator, and and US Treasury Department sanctions result in Maduro’s US assets being frozen.

Maduro declared a victory following an election that was widely condemned as a sham, and may usher in a replacement for the  existing legislative body, the National Assembly, with a new, 545-member “Constituent Assembly,” nominated by his administration.

The country’s economy is in free fall. A humanitarian crisis has ensued. Peaceful protestors have been denied due process and evidence of torture has come to light.

Locally in Connecticut, Venezuelan ex-pats have been holding rallies and protests to draw awareness to the imperiled democracy back home.