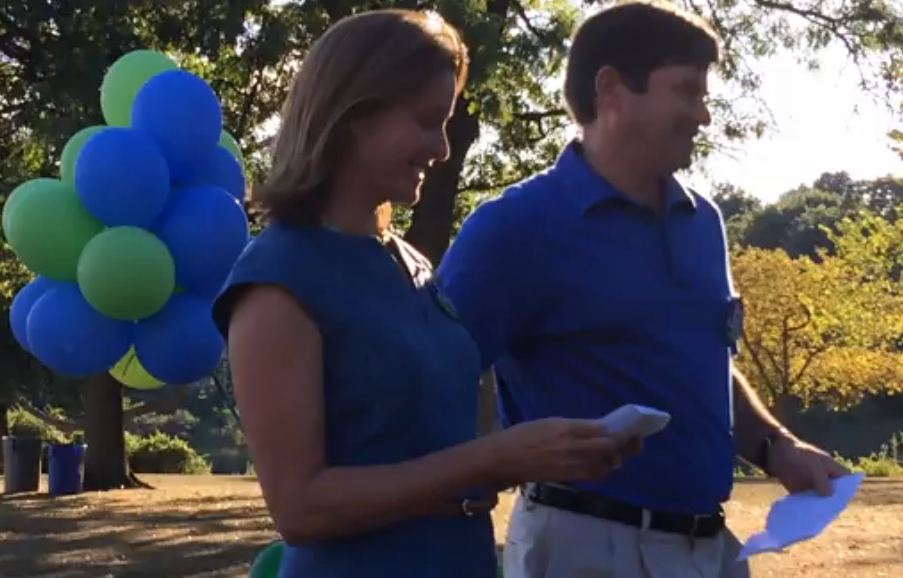 On a beautiful Sunday afternoon in Roger Sherman Baldwin Park, Jill Oberlander, was introduced as the candidate for the Connecticut General Assembly, District 150. The Belle Haven resident, mother and attorney is pitted against Republican, Michael Bocchino of Byram in the November contest.

Greenwich’s Democrat Selectman, Drew Marzullo, who introduced Oberlander to the crowd who had gathered in the park, described the candidate’s chances optimistically.

“Unfortunately,” Marzullo said, “Malloy, in terms of his polling in Greenwich, is not great. So I will tell you, we want to counter that. If the person comes out and supports Foley, they need to cross for Jill or Jim Himes, and that’s doable,” he said.

“What we’re finding is that Jim Himes’ polling is doing very well. People are very educated in this town. People will cross. So we have to get out and vote for Jill. Whether you live in Byram or Belle Haven or Riverside, we have got to get people out.” – Selectman Drew Marzullo

Frank Farricker introduced Marc Abrams who is running for State Rep in the 149th district against seven-term incumbent State Rep Livvy Floren, before talking about what exactly the State Legislature does.

“They help us. We need someone, with kids, who understands the issues at play in Greenwich, and Connecticut. It’s not about a Democrat up there. Or having somebody who’s lived in certain parts of Town. What matters is having the best person up there,” Farricker said. “And that person is Jill.”

Oberlander’s husband described how proud he is of his wife, who he said grew up nearby in Ardsley, NY, attended public schools, and whose grandparents were florists in Brooklyn.

“By now many of you are familiar with her academic and professional achievements: Cornell graduate, majored in government, University of Chicago law school, accomplished lawyer with a career focused on public service,” said Oberlander’s husband of his wife’s background. “The perfect background for this job…She is incorruptible, extremely hard working and dedicated.”

“I believe in the American dream and the power of government to make a difference in shaping people’s lives for the better,” Oberlander said, explaining why she decided to run for State Rep for Greenwich.