The meeting room at Darien Library was packed on Wednesday night for a presentation on fake news.

Reference Librarian Sally Ijams said that during the lead-up to the presidential election, one particular fake news story referred to as “Pizzagate” was a viral conspiracy. The fake news story was that Hillary Clinton was running a child prostitution ring out of a pizza parlor.

“That’s what can happen when fake news goes viral,” she said, adding that 28-year-old Edgar Maddison Welch, of Salisbury, NC, had been headed to a pizza parlor with a gun to take measures into his own hands when he was arrested.

Ijams urged readers to drill down when they spot news that appears suspicious. “Be cautions with click bait,” she said, adding that creators of click bait profit from readers’ every click. Click bait, which relies on sensationalist headlines or eye catching thumbnail pictures, is designed to generate online advertising revenue.

Did you read that Judge Judy Sheindlin died? No she did not. Ms. Ijams said that if you can’t find the news story in more than a single source, assume it is fake. 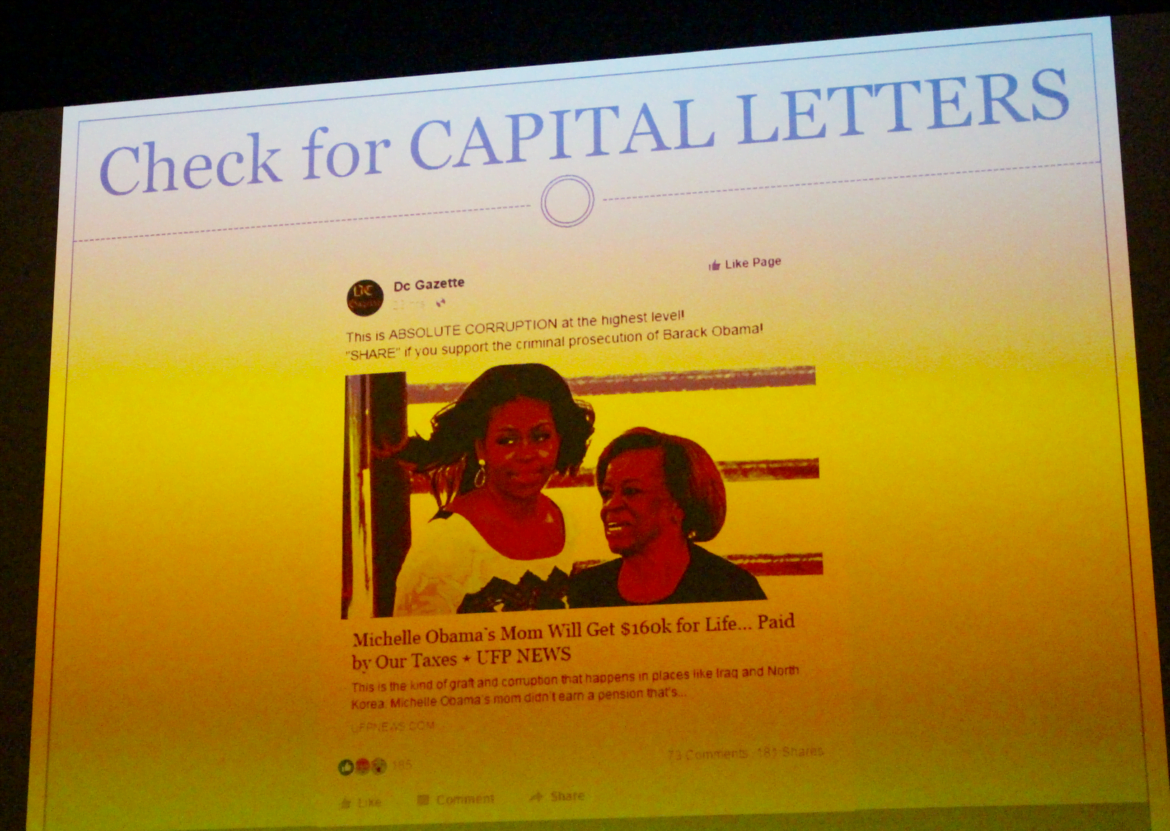 Headlines in all capital letters are a clue that a post is fake news.

Ijams shared a fact sheet with clues to spot fake news. An item is likely fake if the headline is written in all capital letters.

“We call that shouting,” Ijams said, adding that often times fake news is designed to evoke emotion.”If it makes you angry, it’s a red flag.”

Ijams described UFP News as “the overlord of fake news.” Under their umbrella are sites including DC Gazette, which she said is a well known purveyor of fake news. A fake headline from this site read, “Michelle Obama’s Mom Will Get $160K for Life …. Paid for By Our Taxes.”

Another way to detect fake news is when the website has an odd domain name.  “Watch out for websites that end in .com.co and fake versions of real news sources. “When you see the .com.co that is the country code for Colombia,” Ijams said. “These are intentional fake news sources that are ripping off real new sources.” 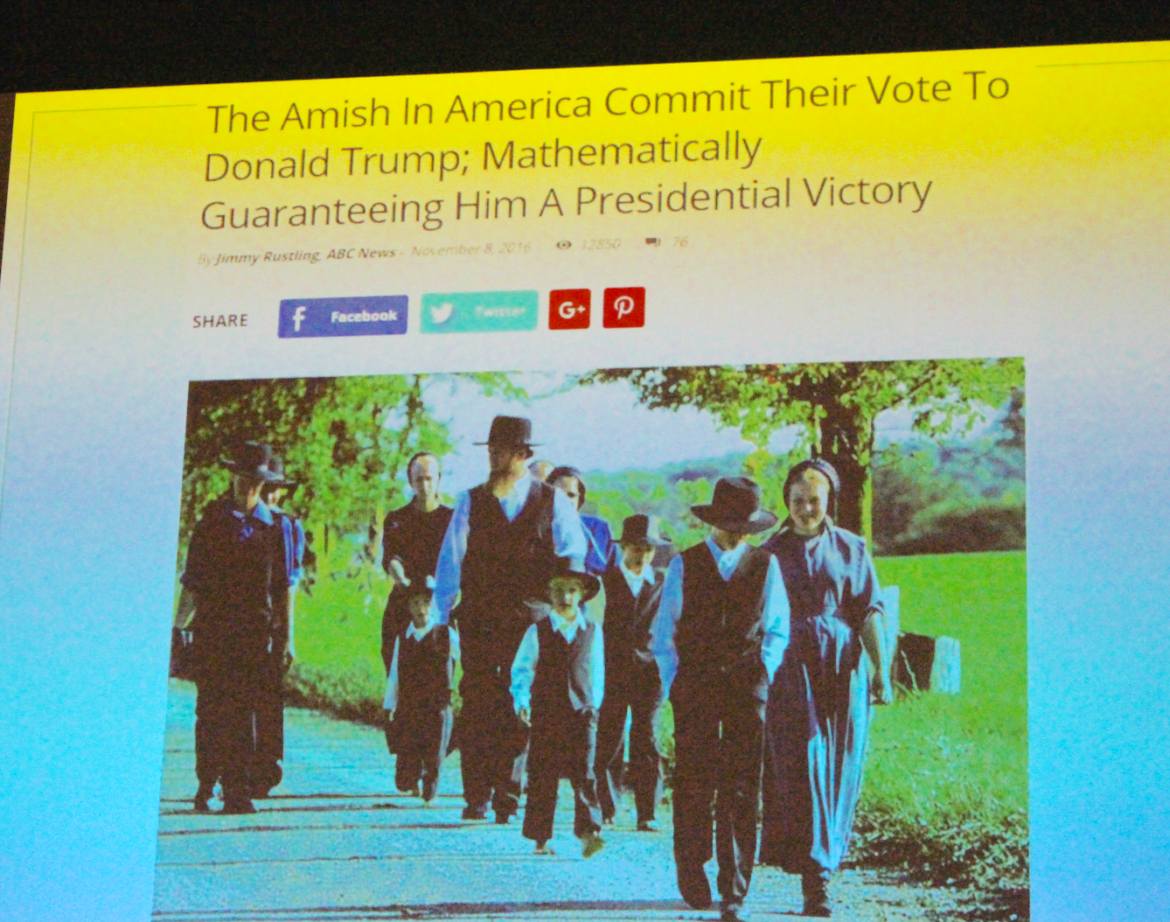 A fake news story that went viral on a news site that mimicked ABC News and its logo.

Ijams shared a fake news story that was published on a news site that mimicks ABC News and its logo. The article has a .com.co address and even gave a byline to author Jimmy Rustling. Drill down a bit further. Here is Jimmy Rustling’s bio:

Born at an early age, Jimmy Rustling has found solace and comfort knowing that his humble actions have made this multiverse a better place for every man, woman and child ever known to exist. Dr. Jimmy Rustling has won many awards for excellence in writing including fourteen Peabody awards and a handful of Pulitzer Prizes.

When Jimmies are not being Rustled the kind Dr. enjoys being an amazing husband to his beautiful, soulmate; Anastasia, a Russian mail order bride of almost 2 months. Dr. Rustling also spends 12-15 hours each day teaching their adopted 8-year-old Syrian refugee daughter how to read and write.

Domain names that end in .com, .edu or .org are more likely to be real news.

Fact checking websites help readers verify whether a news item is fake or not.

FactCheck.org is a good source as it is affiliated with the Annenberg Public Policy Center.

Two other sources are Politifact.com and RetractionWatch.com.

Ijams said that AllSides.com shows three versions of a news story: one from the left, one from the right and that is neutral.

Snopes.com is the first, the oldest and the best. “They get leads from people like you,” Ijams said to the audience Wednesday night.

If the news is too good to be true, too weird to be true or to reactionary to be true, trust your gut. Ijams reminded the audience, “A sucker is born every minute.”

Excessive punctuation including multiple exclamation points are a give away. So too are claims that the post contains a secret or something “the media doesn’t want you to know.”

If the article lacks a byline (an author’s name) that is another red flag. Further, if the website lacks a “Contact us” or “About Us” tab at the top, think twice. The “Contact Us” section should have an email address that matches the domain name. Also, think again if the “About Us” tab describes the site as “fantasy news” or “satirical news.”

Ijams said high school students are often told not to trust Wikipedia as a source, but she disagrees. “I am a big fan of Wikipedia. Why not use it?” she asked. “It’s crowd sourced information. If Wikipedia has any question whether or not it is true, there will be a big banner across the top.”

Ijams said the website Institute for Historical Review sounds credible because it is a .org. Though it has a little logo at the top, there is no “About us” and no contact information. Ijams said the information just doesn’t sit right, adding that the site’s purpose is to deny the Holocaust.

Another hint: Does the article lack a date?

Does a reverse image search show that images in the post are authentic? The image may have been altered or Photshopped. 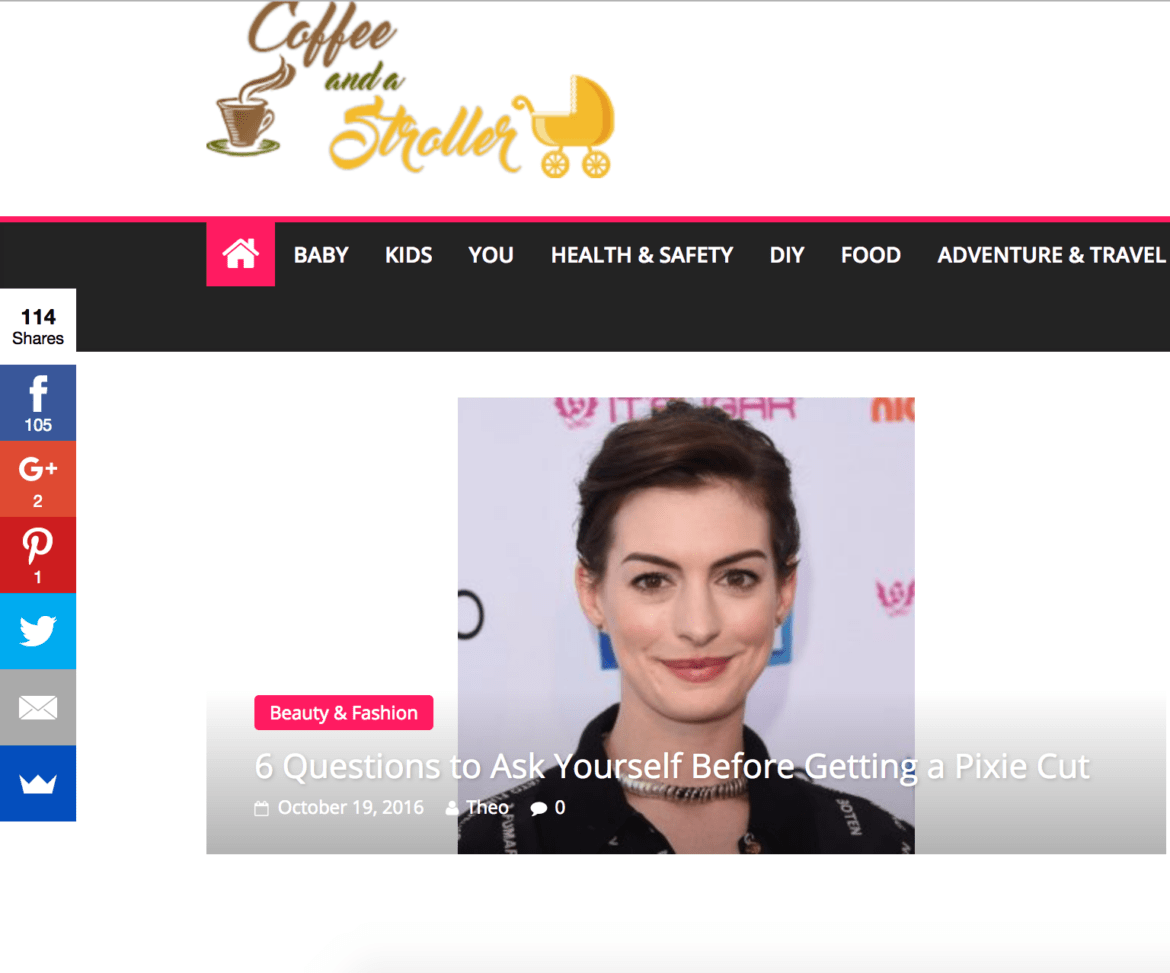 Ijams said watch out for click bait websites like CoffeeandaStroller.com which are are designed to have items shared via social media. She warned that they mine readers’ data. “Be very very cautious with click bait,” she said.

Another example of fake news was published on Wednesday on InfoWars.com

“It tells me that in Sweden, Muslim immigrants are throwing firecrackers at a baby. That makes me angry. That’s heinous, awful and makes my blood boil. That’s all intentional. The angrier I get the firmer I’m going believe this is happening and it’s righteous indignation, and I am going to look for more,” she said. “They want to get you angry. They want to rile you up.”

A check list from Checkology notes that it is easy to clone an existing website and create fake tweets to fool people. “Bots” are extremely active on social media and are designed to dominate conversations and spread propaganda. Fake news and other misinformation often use real images from unrelated events.

“Fake news can hurt. But real news is a good thing,” Ijams said. “Your local newspaper is going to report what is happening here and now. Small town newspapers are good news sources. I love my real news.” 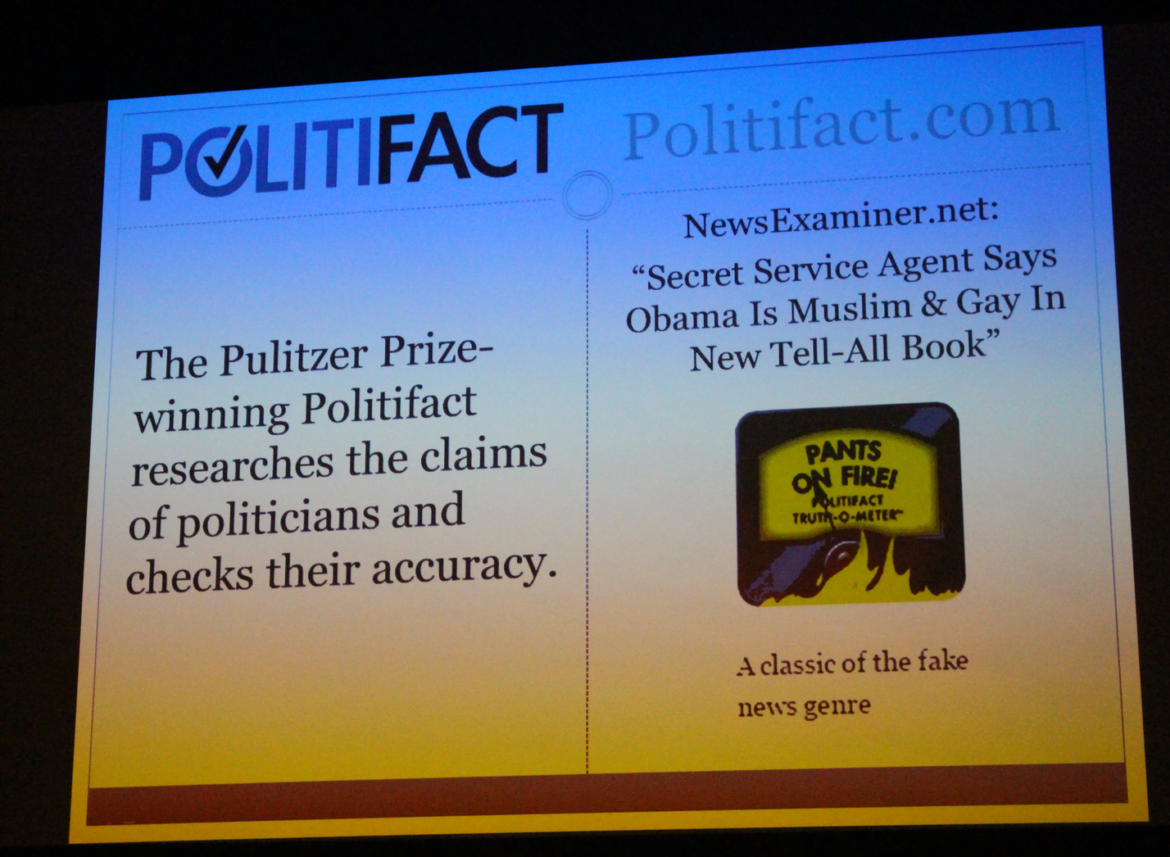 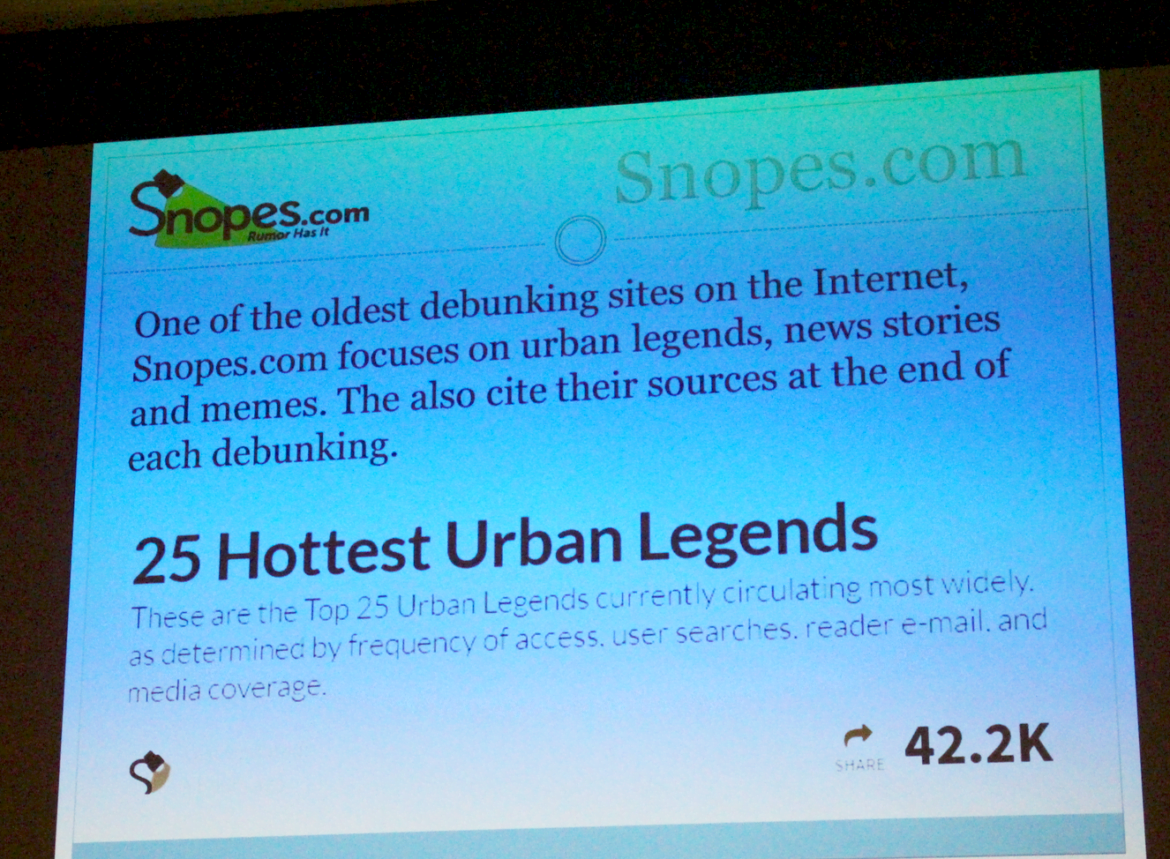