For weeks Greenwich residents have been trying to peer inside the space at 10 Greenwich Avenue to see what’s in the works.

A newly installed sign over the doors, and flyers featuring a whimsical illustration of a skull have peppered the space, offering the promise of “La Taqueria,” a restaurant, which owner and chef Dennis Lake says will open in May.

“Everything is on schedule,” he said on Wednesday, adding that he was in the midst of the hiring process for about 15-18 employees.

Mr. Lake, who in addition to having his signage in place, has secured a liquor license.

The space which has in the past been home to Boast, T Mobile and 2nd Time Around consignment store, is rapidly being transformed into a restaurant with what Lake describes as a taco-heavy menu with $3-$5 tacos, and a $10 price point per person. There will be seating for 22 people including stools at a counter and seating at tables, plus take out. 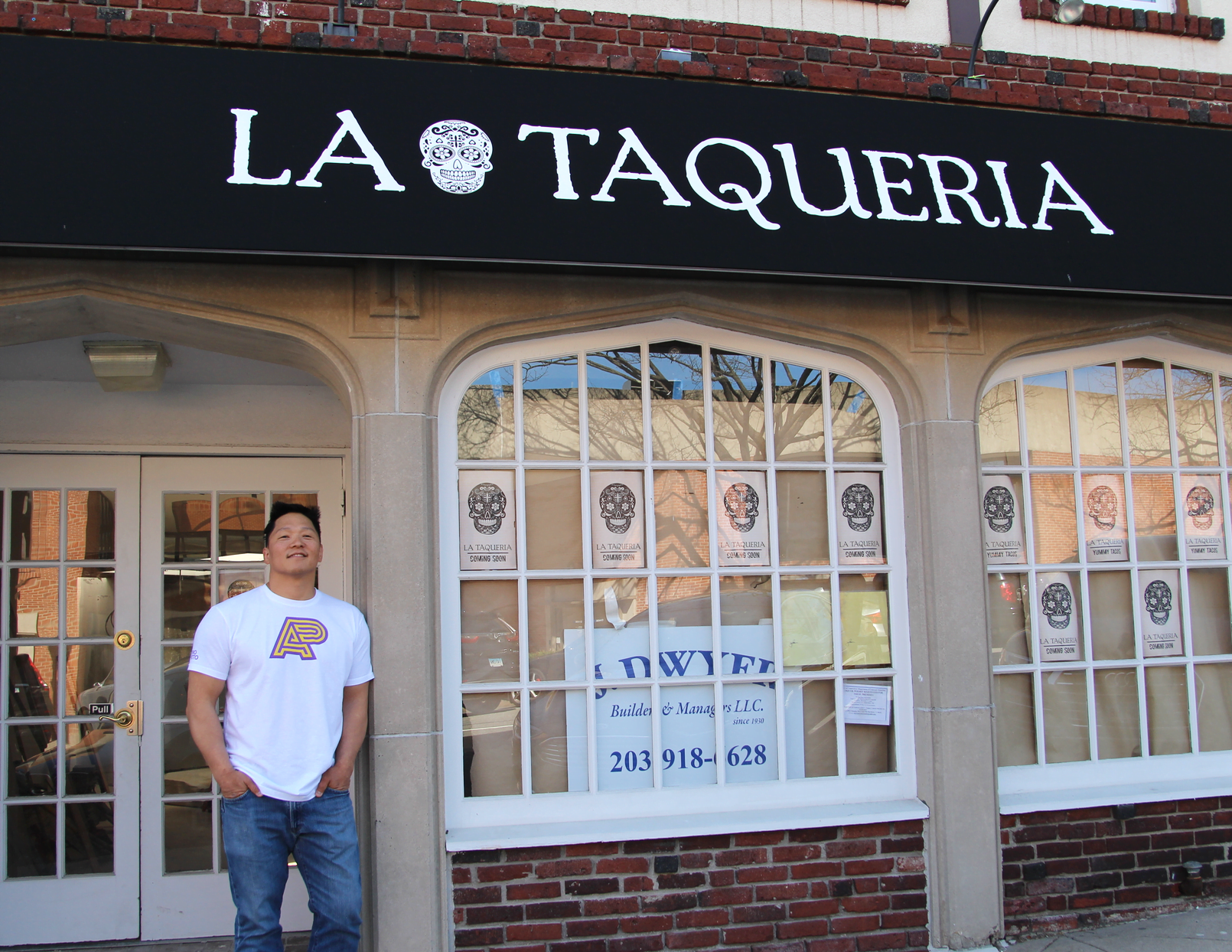 The menu will also feature house and specialty margaritas, in addition to beer and wine.

“I’m a red wine drinker, and I’ll definitely have a nice selection of wines and ice cold beers, including Mexican beers,” Lake said, adding, “But I think margaritas go great with tacos.”

The restaurant, Lake said, not be a “white table cloth” establishment, but nor will it be like Chipotle, which closed not too long ago across the street.

“You’ll go there when you’re in a rush,” he said. “But people will come here for food, service, ambiance, and the fun factor.”

Of course, the liquor license will be a differentiating factor, but the other difference is Lake himself.

LaTaqueria is not a chain. “I have no investors,” said chef Lake. “I’ve had to budget my lifestyle because of this. It’s the next natural step in my progression.”

For a time, Lake worked at Glaze Teriyaki, a chain of restaurants with multiple investors.

“It is Japanese – simple food with great marinades and grilled meats over white or brown rice that came with salad and a choice of house made dressing and a handful of sides that are pretty yummy.”

“This is a lot more satisfying,” he said of opening his own restaurant.

Lake’s path to opening La Taqueria began three decades ago with a job as a dish washer at the age of 14.

Now, at 43, he has a long list of experience as a chef in a variety of restaurants.

“From that first job, it was an easy decision,” he recalled. “When you get to middle school or high school, people ask you what you want to do when you grow up. I like restaurants, and I’m good at it.”

Chef Lake who said he and his sister were adopted from Korea, grew up in western Massachusetts.

Lake attended Culinary Institute of America for two years and then worked for Hartmut Handke, a Certified Master Chef out of Columbus, Ohio from 1994-1995.

“Chef Handke specialized in American and European food. There was a little of everything on his menu. Things have changed a lot. There were 90s dishes.  Simple things like crab cakes and mixed green salads. Cedar plank roasted salmon. He was one of the best at the time. He did two stints at culinary Olympics and won gold every time. That’s what attracted me to him – his accolades, his greatness and the prestige of working for him.”

“I remember the phone call,” he said. “My mom said go back for a bachelor’s degree, which meant another two years at same school. The cooking school didn’t have a bachelors when I was there the first time.”

After the two years back at Culinary Institute of America, Lake returned to Ohio and worked for Handke for another two years.

From there, he headed to Greenwich and worked at “64” the restaurant at 64 Greenwich Avenue under another Certified Maser Chef. When that chef left, Lake followed him into New York City where he had business partners and took over several struggling restaurants in hotels.

Another interesting job Chef Lake held was at the 1,000-seat Planet Hollywood in Times Square.

“When you go to Times Square it’s very touristy,” he noted. “Theme restaurants are the only types that can survive.”

Then for a time Lake worked for a celebrity chef Kerry Simon. “I learned a lot from him,” Lake said.

At Rosa Mexicano, which specializes in contemporary Mexican cuisine, Chef Lake said he had a wonderful experience.

It was while working at Rosa Mexicano that Chef Lake learned more about nixtamal, which he said will make his tacos “better than you ever had in your life.”

“It is a pure corn, with a different texture and smell – and it’s delicate,” he said, adding that nixtamal is the noun that comes from tamalization, the process that originated in Mexico in which dry corn kernels are boiled with sodium bicarbonate.

“It breaks down what your stomach can’t, and you use that to make the dough for the tortillas,” he said. “It’s authentic.”

“I’m using a company called Tortilleria Nixtamal,” he said. “I’ve been friend with the owner for a while. They provide the masa to make the tortillas. More and more people are finding out that it’s the best way to make tortillas.”

There is also a selection of small plates, a “Chef’s Plate,” and desserts.

Watch this space for word of La Taqueria‘s grand opening in a few weeks.