Letter to the editor from Francia Alvarez, Old Greenwich 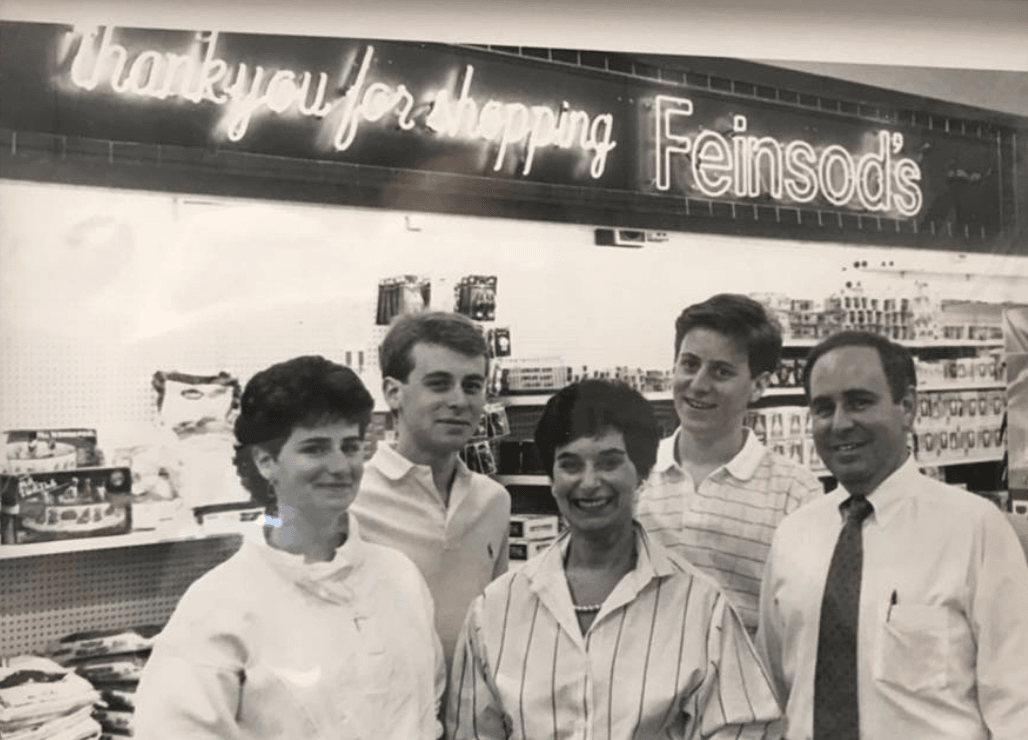 We need to support our local businesses. Recent years have been tough for businesses in Old Greenwich due to construction from a new sewer line, the new Metro North Bridge, a new nearby big-box store, and increased internet shopping.

Over the years, I have often walked into our village hardware store and been welcomed by someone asking, “How can I help you?” I have been shown exactly what I need and given tips on how to complete my project. So I recently spent time with the owner of Feinsod Ace Hardware, Jay Feinsod to learn more about the history of this landmark business at 268 Sound Beach Avenue.

Only two families, the Watts and Feinsods have owned this hardware store that has been supplying advice along with hardware, garden, plumbing, electrical supplies, and housewares products for 95 years!

Sterling E. Watts Hardware was founded in 1925 by the Watts family, who lived in a small house behind the store. The town folk referred to it as Wattsy’s. The store once even had a Sunfish Sailboat mounted on the roof because Sterling E. Watts Jr. was an avid sailor.

Both owners have been civic minded. Sterling was a member of the Old Greenwich Lions Club and served as President, and Jay will be the new Secretary of the Rotary Club of Greenwich beginning in June.

Jay and Esta Feinsod purchased the hardware store from Sterling Watts, Jr. in 1986, and Feinsod Ace Hardware has become a central location for today’s DIY generation. 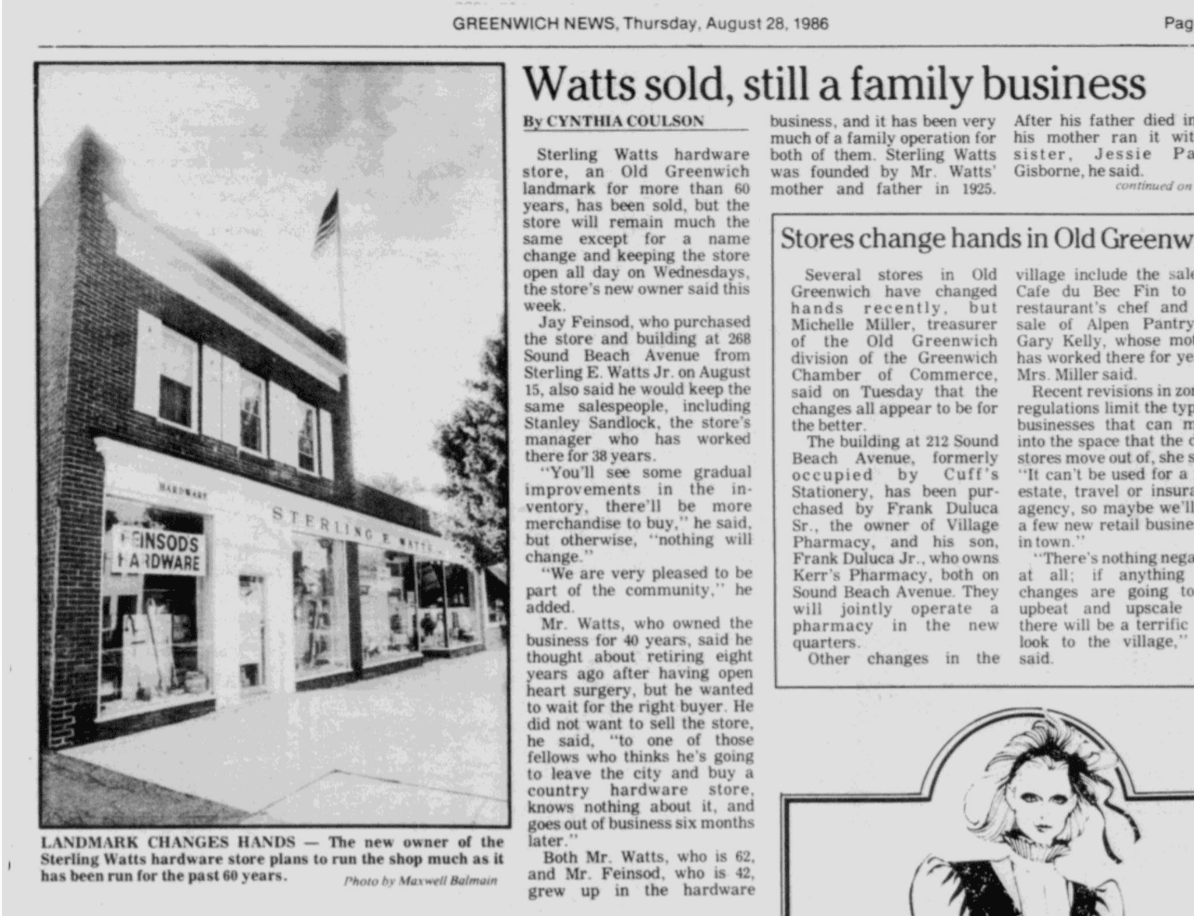 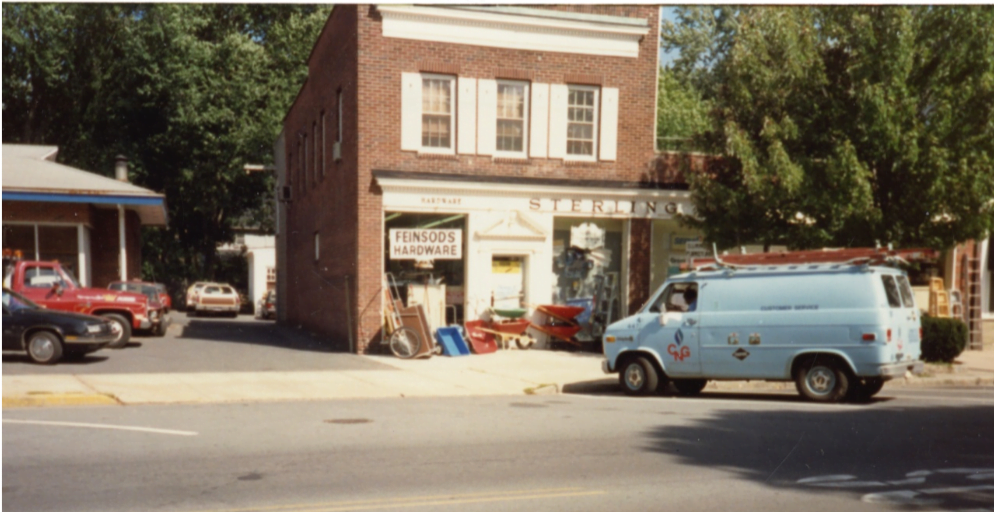 Courtesy of the Greenwich Historical Society, 1986

Born into the hardware business.

Jay continued to expand his businesses, at one point having 100 employees with the purchase of Odell’s Hardware in Rye, Grand Rental Station in Port Chester and Smith Party Rentals in Greenwich. Over the past 20 years, Jay has sold or closed the four businesses and has downsized to his Old Greenwich store. 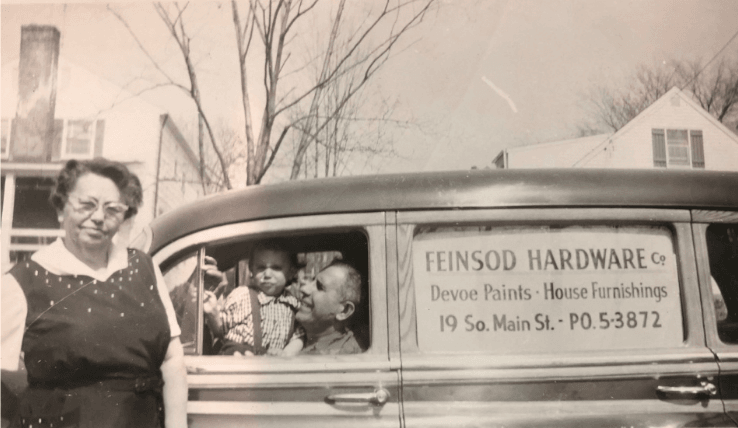 Jay Feinsod bought his first store in Port Chester in 1964 from his parents.

I asked Jay how business in Old Greenwich has changed and he said, “In the late 80’s there were more retail stores on Sound Beach and fewer real estate offices. The shopping area has not changed much except for CVS’s presence which led to the closing of two local drug stores. Amazon and the overall internet’s effect forced the closing of the local book store and I am sure has repercussions for all retail establishments on Sound Beach Avenue.”

So, how can we, as residents of Old Greenwich, keep our community’s businesses vibrant? By shopping local!

Why should you shop local?

Personalized service by employees who care.

Andrew Wolf, the store manager at Feinsod, graduated from GHS and has been with the store for 33 years. With his extensive experience he is happy to help you any time of the year. 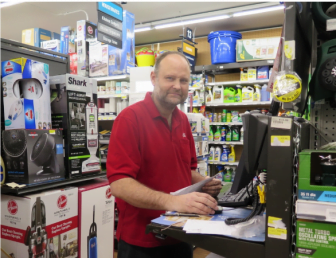 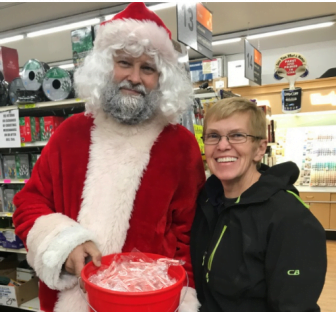 Merchandise ordered online at acehardware.com is delivered to the store for customer pick up with no freight charges. (See order pick up rules – Some restrictions may apply). A recent customer ordered a Weber Grill online at Feinsod Ace Hardware and it was delivered to the store with no freight charges. Make sure you set the store locator to Feinsod Ace Hardware and sign up for the ACE Rewards Card. Feinsod Ace will assemble and deliver the grill right to your deck or back porch at no extra charge. 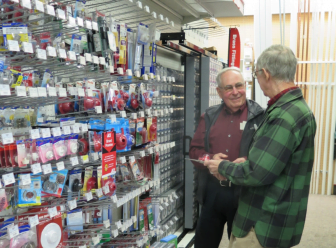