Letter to the editor submitted by Laura Gladstone of Fiscal Freedom for Connecticut, Jan 26, 2019

It was a big week for Senator Alex Bergstein’s Tolls Sales and Marketing Tour. Let’s give our new state senator credit. It’s no easy task to go to New Canaan, Stamford and Greenwich to sell a new tolls bill after campaigning on a promise of no new taxes and claim, at the same time, to be business friendly. 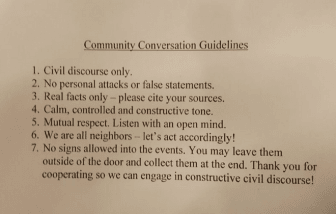 Understandably, she expected controversy. Perhaps that’s why she left rules of comportment on every seat in New Canaan and Stamford, and instructed her constituents to use a “calm, controlled and constructive tone” and to “listen with an open mind.” (Most of the time, voters tell their elected representatives how to behave. Apparently, for Senator Bergstein, it’s the other way around.)

In any case, it seems these rules apply only to Sen. Bergstein’s constituents and not to her. During the “community conversations,” the “community” was actually permitted to converse very little. 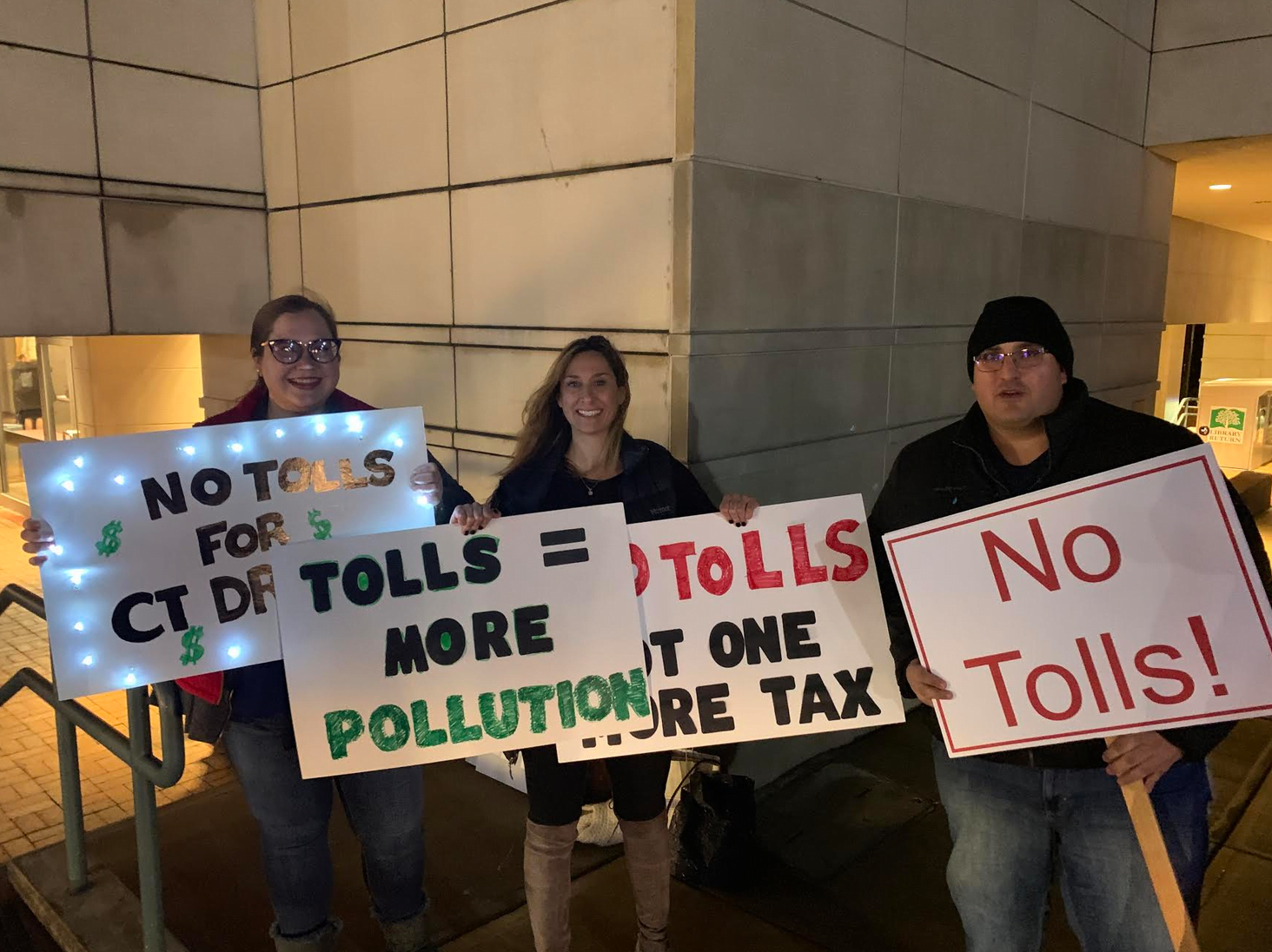 In Greenwich, the “conversation” was between Sen. Bergstein and a special guest, the Chairman of Pepsi (which seemed a strange choice for Connecticut business-friendly talk – while at Pepsi, she refused to move the company headquarters to Connecticut and stayed in New York). Sen. Bergstein sat, Oprah-like, chatting, taking only a few written questions from constituents at the very end.

Though the written rules for her town hall attendees in New Canaan and Stamford insisted on “Real facts only – please cite your sources,” Bergstein herself relied on the trusty standbys “studies show” and “people want” (check it out for yourself on our Fiscal Freedom CT YouTube channel). In her first two “community conversations,” she was forced to shut down or talk over tough questions; by the time she made it to Greenwich, she was answering only written questions submitted on cards. Bringing signs or asking citizens to sign anti-tolls petitions were strictly off-limits, and she made sure her daughter went around and enforced the rules. 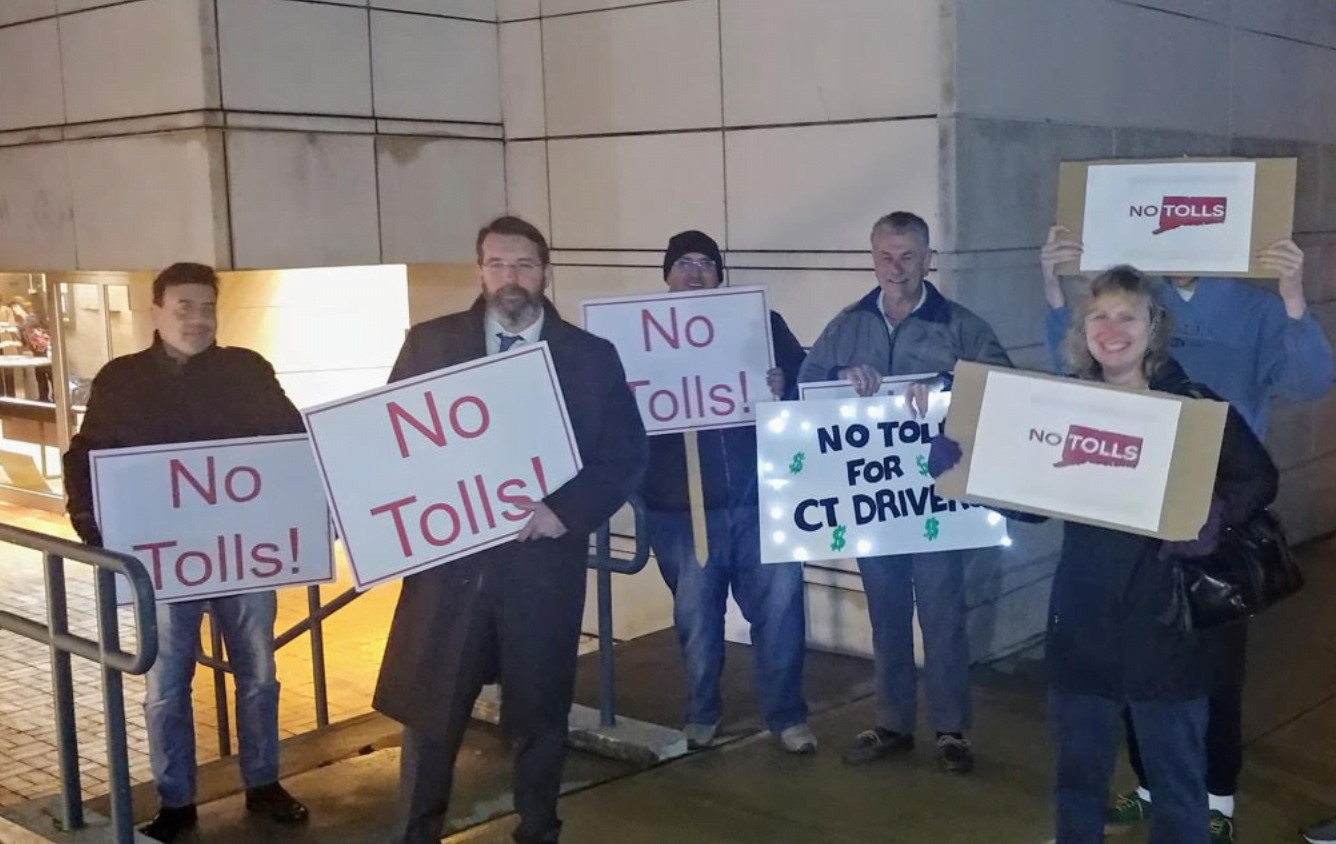 But what’s most disturbing is that Sen. Bergstein’s claims were either wrong or misleading. She claimed all the states have tolls along the east coast (apparently, she hasn’t visited Rhode Island, which doesn’t tax cars). She made the ludicrous claim that a tax on driving to work (which is what tolls are) will “ SAVE us money”.

She did make sure that the audience knew that she was Chairman of the Banking Committee so all these ideas had to be true. I am not sure how she got that job, because she worked at a law firm for only two years, never held a finance job in her
life. She has no experience in the job she holds, yet, she is going to make CT the most tolled state in the union and spend our money.

Her bill plans to install 82 toll gantries along 95, Merritt, 84 and others will cost a single mother traveling from Bridgeport to New York for work an additional $2,000 a year (Yankee Institute), even though we already pay one of the highest gas taxes in the country (Tax Foundation). These tolls will affect 72% of IN-STATE drivers (Hartford Courant), not the out of state truckers promised.

And in addition to hurting the middle and working class, tolls will drive more pollution and traffic to our local neighborhoods and roads, as people avoid the expensive tolls. This is the antithesis of the environmental defender Sen. Bergstein portends to be.

Please write Sen. Bergstein and tell her you are upset she has gone back on her campaign promise to be fiscally responsible and business-friendly. Tell her that we already pay enough in taxes to have good infrastructure. Connecticut already spends more on administrative costs (pensions for government workers) per mile of road than any other state in the country (Reason Foundation) – 9x more than the rest of the union. Remind her that we already pay 5x the national average per road (Reason Foundation). We are taxed enough already.

Under her proposed bill, Connecticut will be the MOST tolled state in the union even
though we are one of the smallest (48th ). It will make Connecticut one of the least
competitive states in the union, particularly with the incoming state property and
car taxes (PA Tribune-Review).

Please write our State Senator and Reps today and go to
https://www.notollsct.org/petition-no-tolls-ct/ to sign the petition against tolls.

Also, go to our website and take the survey and let her know how you feel about tolls, https://www.surveymonkey.com/r/WSLJLWR