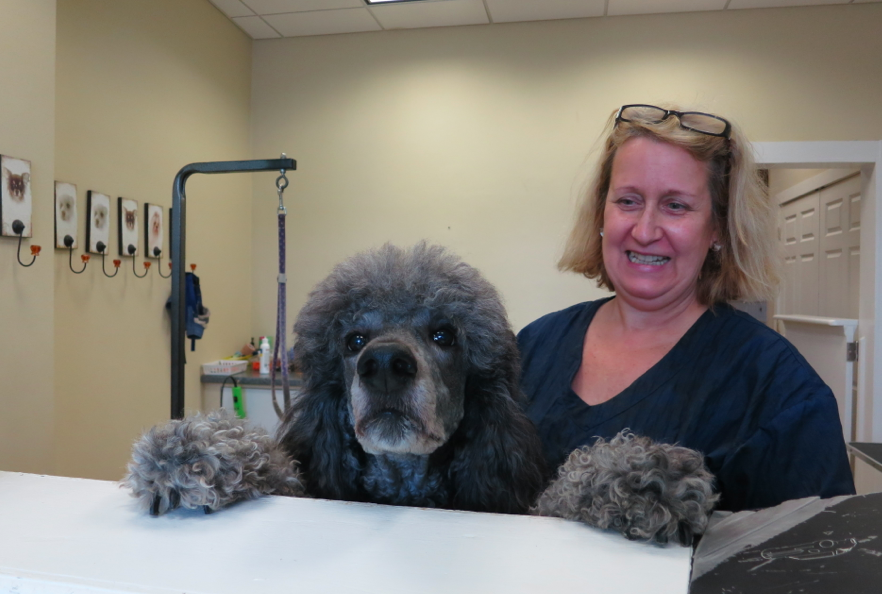 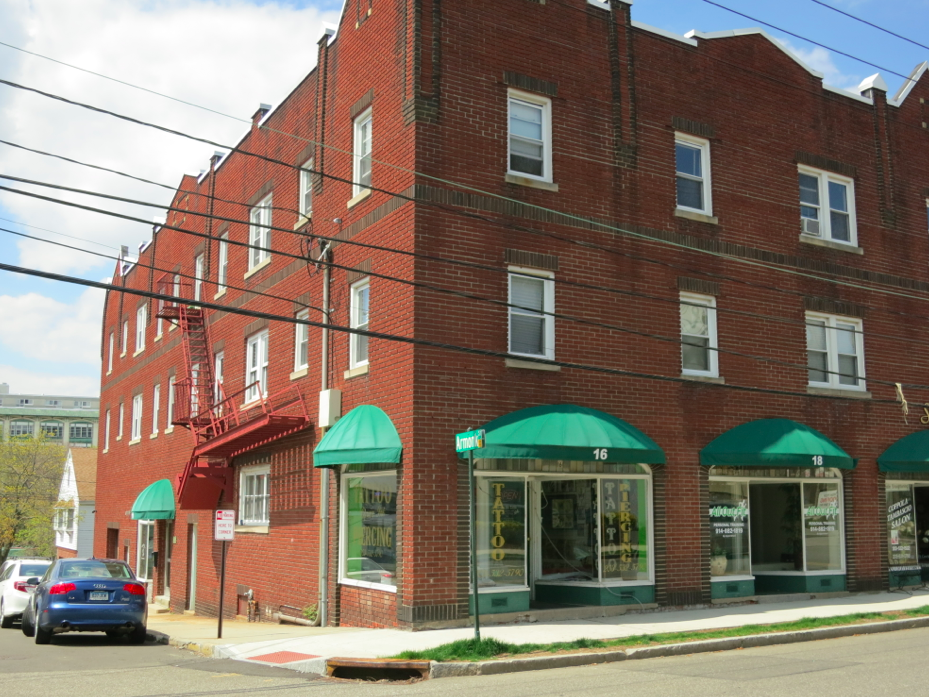 The entrance to Vanity Fur is on Armonk St. a short dead end street with free parking. Credit: Leslie Yager

Step inside the foyer at Vanity Fur and the Tiffany blue walls and an elegant chandelier set the tone for a unique dog grooming experience. 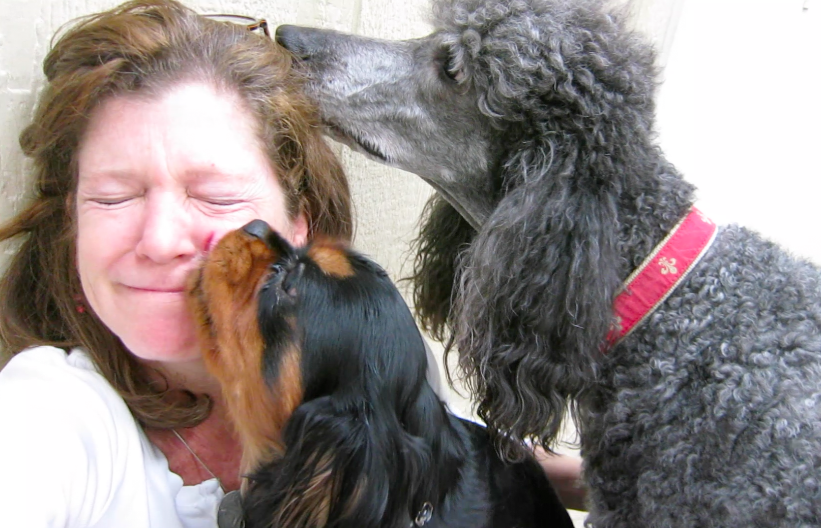 Kathy Valentino’s dogs accompany her to work where they make everyone feel welcome! Credit: Leslie Yager

Vanity Fur owner Kathy Valentino, who works briskly bug gingerly with her scissors and electric shaver, says that dogs are happy when they walk through the front door.

Valentino, who has been grooming dogs for 30 years, opened Vanity Fur at the front of the North Water Street building ten years ago. Last July she moved to the back of the building with an entrance along Armonk St and her loyal customers followed along. 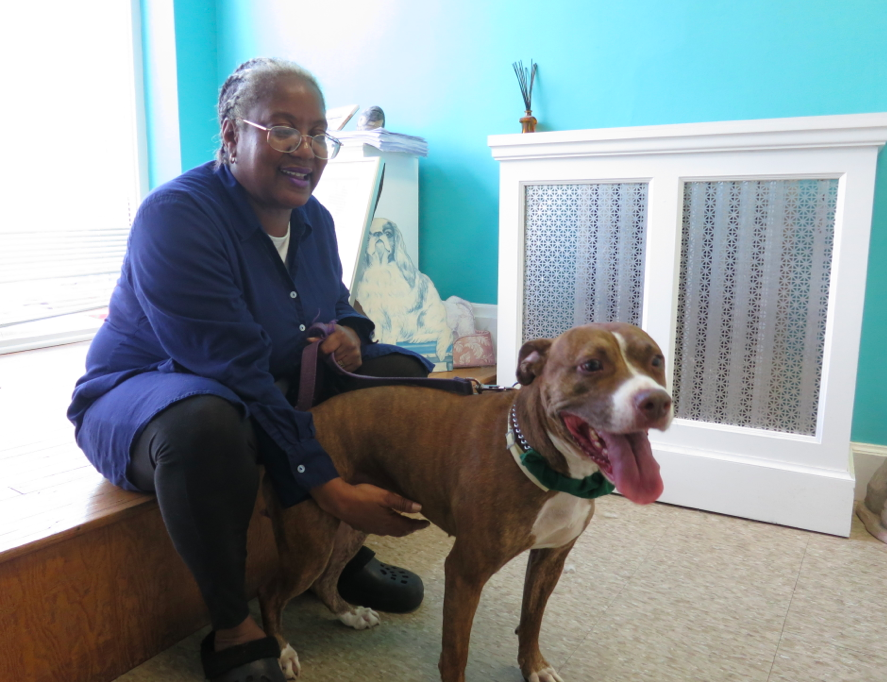 Punctuating the continuous stream of Bichon Frisés, Goldendoodles, Portuguese Water Dogs and Poodles of all sizes was Shaqueeta the Pit Bull who was brought in for a nail clipping by her owner Vicki Camacho.

According to Vicki, Shaqueeta, who she adopted from Greenwich Animal Control several years ago, loves having her nails clipped every month. 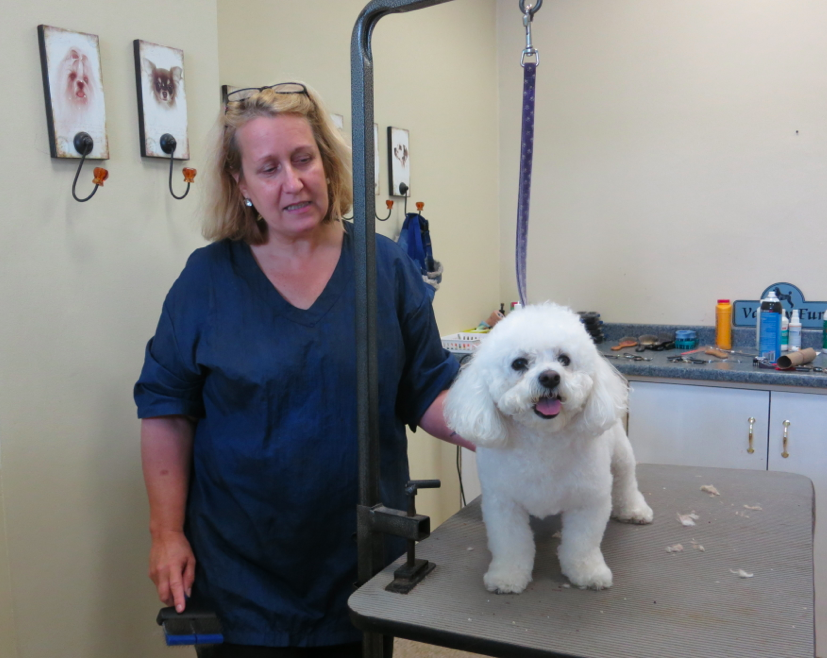 Bijoux enjoyed large dollops of attention from Kathy, JoAnn and the audience of her canine best friends. Credit: Leslie Yager

The next customer was Bijoux, who Kathy said would take about 2-1/2 hours to groom. First Kathy gently worked on the hairs inside Bijoux’s ears. She moved to the paws of her feet and pulled the hair between the pads and trimmed them. She trimmed the hair at the ends of tips of her ears with scissors, all before even touching the electric shaver, which was very quiet. 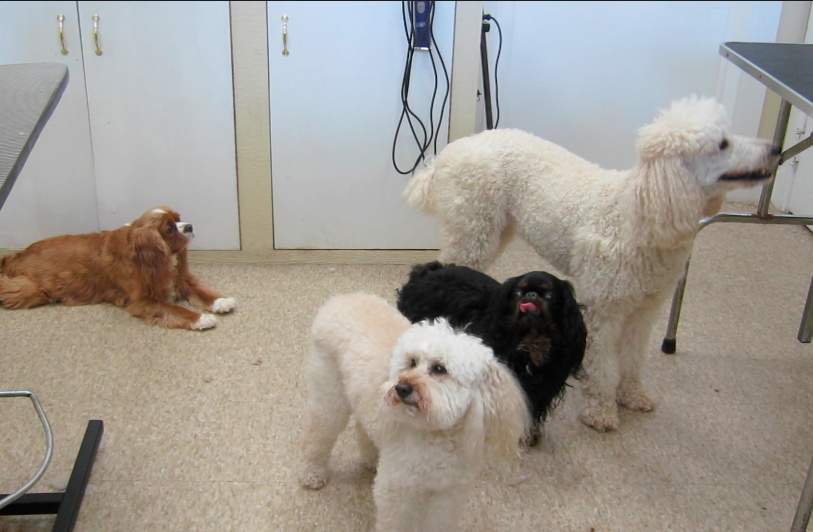 All the while Bijoux enjoyed her audience, which was comprised one reporter and seven dogs. Kathy said she loves bringing her dogs to work as much as they enjoy coming with her. She has five dogs, and it doesn’t take long to figure out who is king. 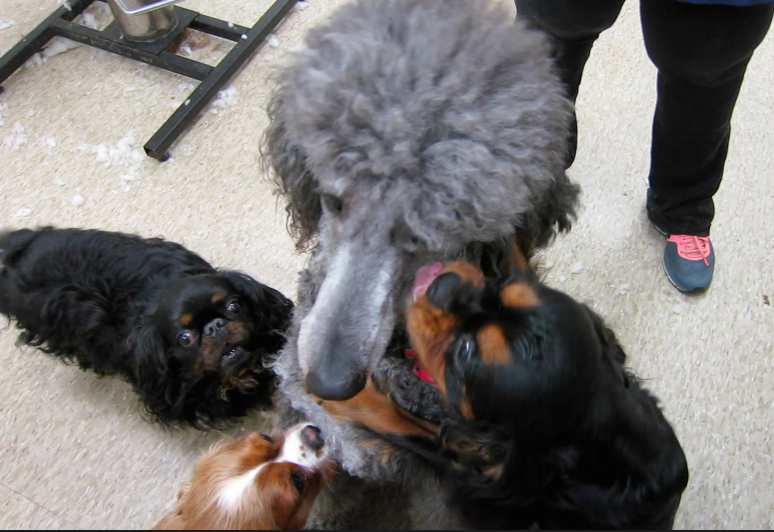 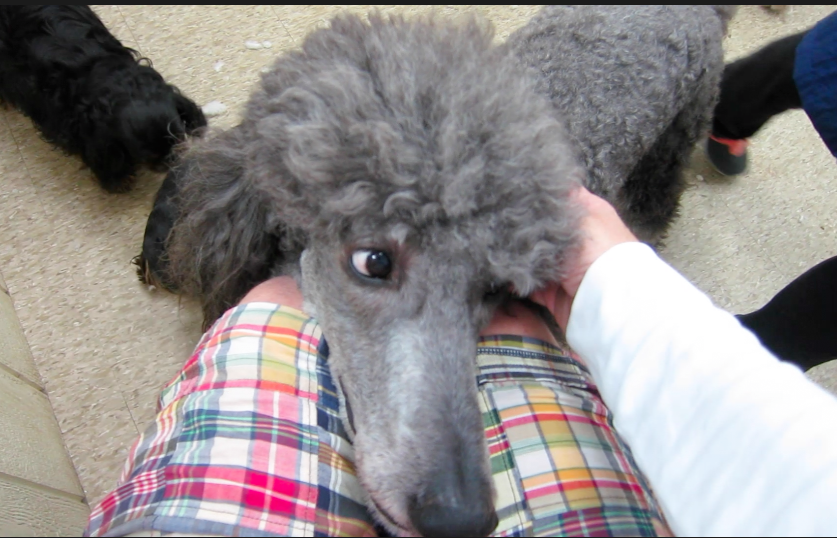 Four-year-old Standard Poodle, Danton, is not only a therapy dog — Kathy brings him on nursing home visits in Wilton — but he also provided tremendous comfort to Kathy during a battle with cancer. Now, six years in remission, she credits Danton and her other five dogs for getting through a tough time.

The vibe at Vanity Fur is quiet and comfortable. During our visit seven dogs milled around quietly, but Kathy said some days there are 20 dogs relaxing behind the counter.

“It’s all about how the dog accepts the groomer,” Kathy said, explaining why the dogs all seemed content to be groomed. “It’s very rare in 30 years that I’ve had a problem.”

After she preps a dog, it is brushed bathed and dried it inside what Kathy calls the ‘little spa,’ which is a drying cage that circulates room temperature air. After they’re blown dry and fluffed, they return to the grooming table to finish the haircut. 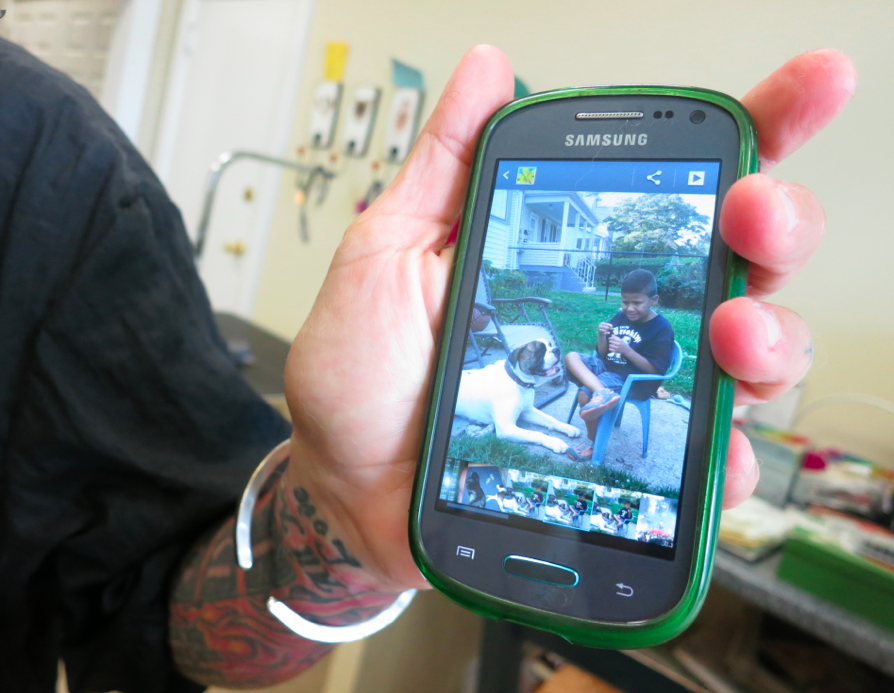 JoAnn Gentile who has worked with Kathy for several years has six dogs of her own: one Bull Terrier, two Boston terriers, a wire hair Fox Terrier, an American Bulldog and a Pit Mix she rescued from South Carolina when she was visiting family on vacation.

Dog grooming is labor-intensive, but price-wise Vanity Fur is competitive. For a Bichon-Frise like Bijoux who takes 2-1/2 hours to groom from start to finish, Kathy charges about $75. For a bigger dog, like a Standard Poodle, she charges $105.

In addition to several municipal parking lots in Byram’s business district, there is free on street parking on both North Water Street and Armonk Street.