It’s been just so cold to walk dogs lately, but this bored dog finally got a walk.

You may have seen a huge 60 lb black Lab being carried down Mason Street Tuesday morning after he collapsed in pain from burned paws. The person tossing cup fulls of chemicals in our path pretended not to see or hear the drama.

For the dog owners among us, burned paws are familiar and upsetting. And although dog booties are silly looking, if he or she will tolerate them, they do the trick.

Some products used to melt ice on driveways, roads and sidewalks can hurt dog paws. If your dog starts to limp or collapse during a walk, the culprit might be de-icing products. 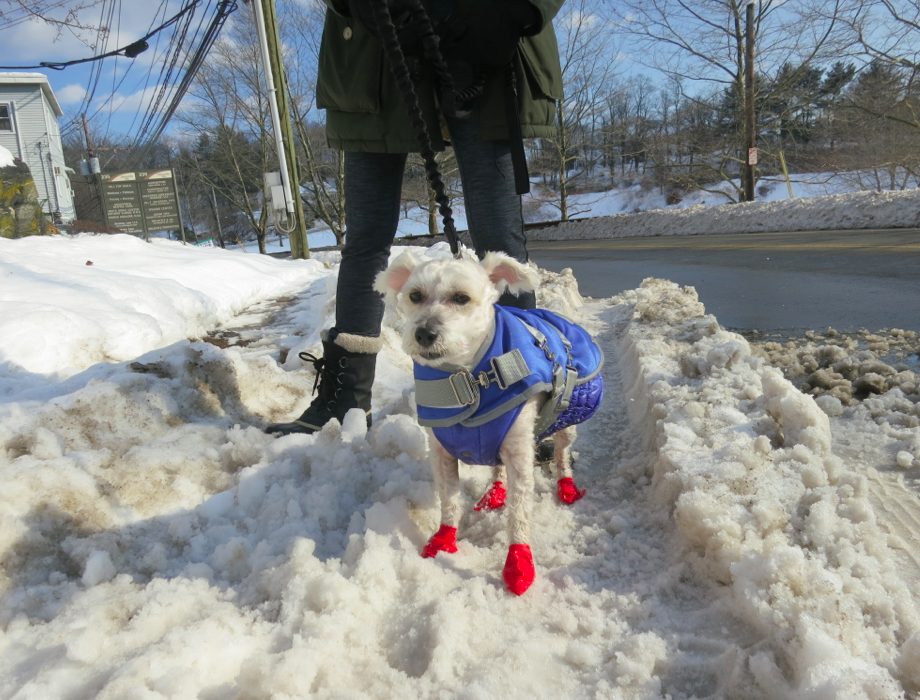 We met Walter in Glenville. These rubber booties do the trick, but not all dogs tolerate them. Credit: Leslie Yager 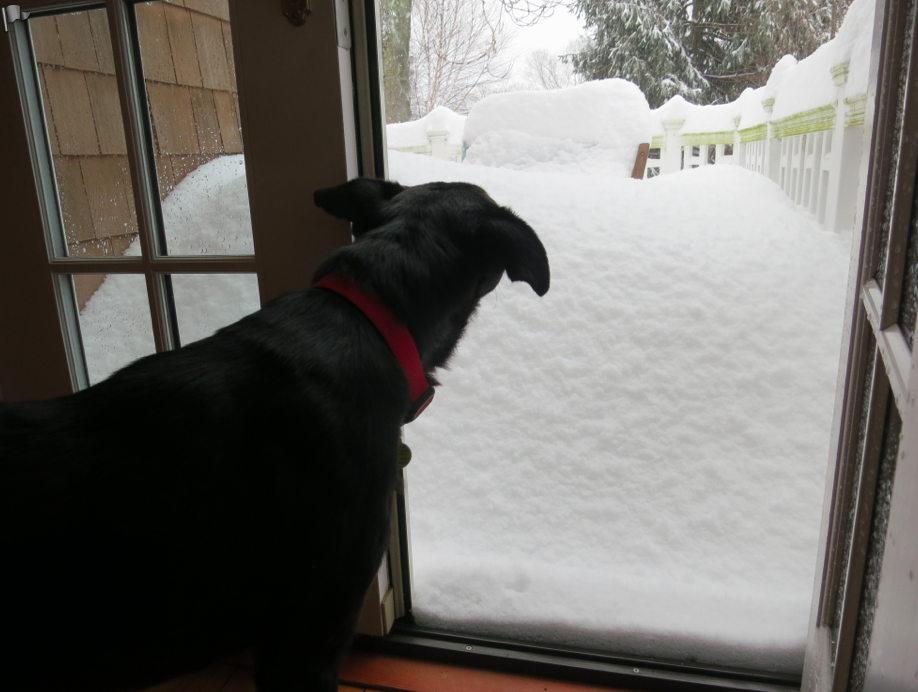 Dogs get cabin fever too. Too bad he can’t get a walk in central Greenwich without getting burned. Credit: Leslie Yager

If you’re about to sprinkle de-icer, consider Paw Thaw which is safe even if your dog licks his paws after stepping in it. It’s also safe if they ingest a little. It may also be a good idea to keep a towel by the door to wipe your dog’s paws when you return from a walk.

Dr. Kathi Meenan, a Norwalk resident and veterinarian at Stamford’s Rippowam Animal Hospital for 15 years said that some de-icers ulcerate the paw pads. She recommends keeping towels inside the door and wiping down their paws after a walk.

At Pet Pantry in Greenwich Cynthia Fox recommends a two-prong approach to pet owners concerned about paw burn, suggesting use of pet friendly de-icer as well as covering paws with boots, balloon-like covers or a balm called Musher’s Secret, which is a pet-paw protective wax.

Fox highly recommends sled dog boots which are polar fleece with rubber vinyl bottoms and mold to the paw.

“These are what they use for dogs in the Iditarod. They mold to the foot. They breathe, and stay on,” Fox said.

Be careful selecting de-icer at the hardware store because although they have a wider variety of choices, some are dog-friendly and others  make no claim of pet-friendliness.

According to an article on Petfinder, ice balls, which form between the pads and toes of hairy-footed dog, can be painful. The article advises dog owners to keep their pet’s inter-pad hair trimmed neatly and short during the winter months because paw hair can retain a lot of those nasty deicing salts.

Dogs left out in the cold for prolonged periods of time can get frostbite on paws and hypothermia, according to the Petfinder article, which advises frequent short walks are better for your dog than a single long walk.