They call her “The Bunny Whisperer.” Deborah Galle has dispensed advice and reassurance to so many Greenwich residents, she’s lost count.

Ditto the number of bunnies she has rehabilitated in her home.

On Thursday Deborah was busy feeding a Cottontail rabbit with three legs.

The pregnant rabbit had been hit by a car and, after the amputation, she is benefiting from the Bunny Whisperer’s care. On her part, Deborah is hoping the rabbit delivers her bunnies.

After feeding the Cottontail rabbit, Deborah gives her a little massage.

“She can’t be released,” Deborah said, explaining why she handles the cottontail rabbit like a pet. “Don’t pick up or play with a bunny in the wild,” she warns. In fact, Deborah doesn’t name the wild Cottontail rabbits she rehabilitates, another reminder that they are not pets. 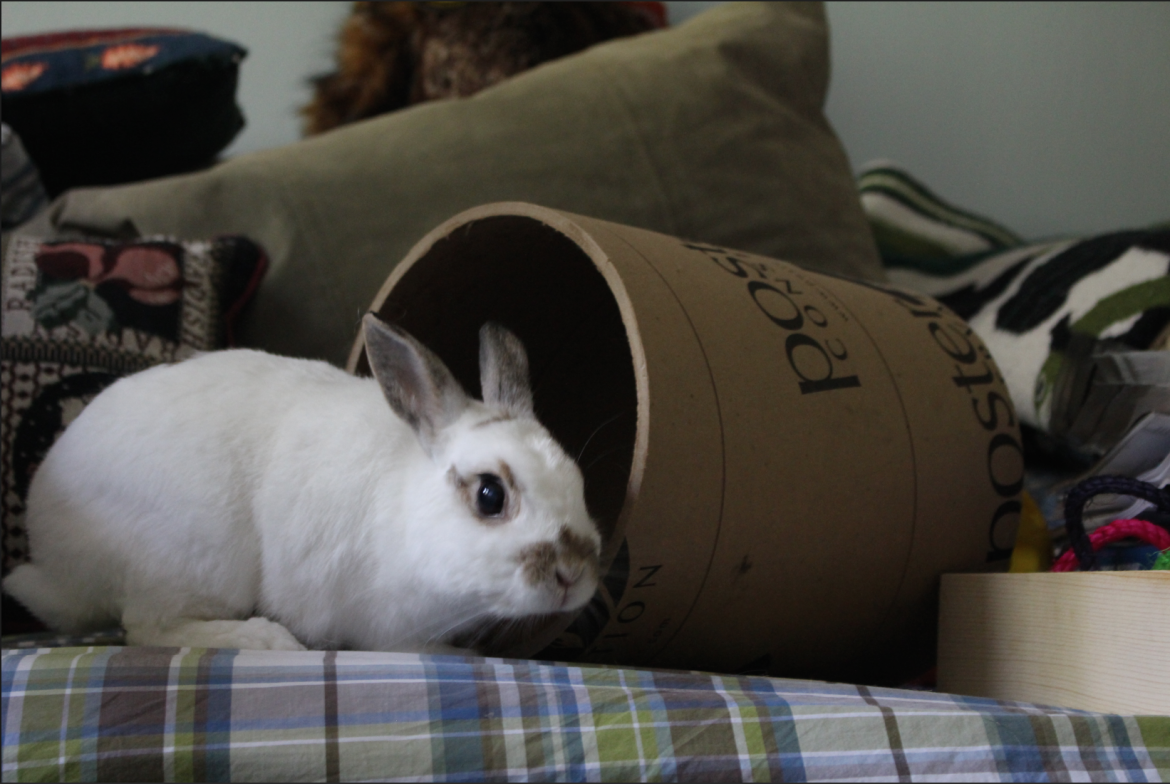 And when it comes to raccoons, Deborah said that if you handle one and you have not been vaccinated against rabies, even with good intentions, you are giving it a death sentence unless your are using protective gear.

“Because of the danger of rabies which can be carried by all mammals, including your dog or cat if unvaccinated, it is standard practice to euthanize a raccoon that comes into direct contact with people,” Deborah explained.

Too often a homeowner will call a nuisance wildlife control officer (NWCO) when they spot a raccoon on their property. “They’ll kill and remove the mother and then call a wildlife rehabilitator and say, ‘We have four babies for you,'” Deborah said, describing a situation that happens all too often. “A NWCO will charge you. Almost all will kill the animal. And their trapping services are very often not necessary because there are humane ways to make a raccoon feel unwanted.”

Instead, Deborah has a suggestion if you find raccoons, “Leave tennis balls soaked in cider vinegar and blast talk radio in the occupied space,” Deborah recommends. “The mother knows she’s been compromised and she will get out and take the babies with her within a few days.”

“People should not interact with wildlife. Observe from afar,” Deborah said. “Interaction should be limited to when a wild animal is in distress and safety for everyone should be most important.”

Deborah gets a lot of calls from people whose dog has stumbled on a rabbit nest. “People say, ‘My dog found the nest. I can’t keep the nest here,’” Deborah said, adding that it will only take a couple of weeks before the rabbits will be out of the nest. She suggests putting lawn furniture around the nest or a laundry basket over it while the dog is outside. However, it is crucial that the furniture or basket is not barricading the nest until after sunrise and removed before sunset. Rabbits feed their young at dusk and at dawn.

“Do not move the nest,” Deborah warned. “The mother has a GPS, so if you move the nest she can’t find her babies. They don’t make any noise and they don’t have a scent.”

“Do not read and apply information you find on the internet,” Deborah said of people looking for advice on what to do when they find a rabbit nest. “It is full of misinformation. Very little of what you will find is accurate.”

The three most important needs of animals found in distress are: quiet, darkness and warmth. A wildlife rehabilitator should be contacted to advise as to next steps.

In her den, Deborah introduces her three rabbits. Oliver stares down Tucker. They just don’t really like each other and take an occasional jab through the bunny cage bars. But that’s ok.  Tucker and Hayley get along fine and play nicely together. Hayley was wild Cottontail but is not releasable. She came to Deborah at two weeks old and had been with humans who found her nest strewn about. The babies had been mauled, possibly by stray cats. Hayley lost half an ear, but her life was spared.

“Cats should be kept indoors,” Deborah said. “They are domestic and not considered part of the natural order.” She said that 59 species of birds are extinct due to cats. Fledgling birds can spend days on the ground before they master the art of flying. This makes them easy prey for cats. “If you must allow your cat outdoors, monitor him/her and do it during the middle and hottest part of the day rather then at dawn or at dusk, when mother rabbits feed their babies and many species of wildlife are out and about.” 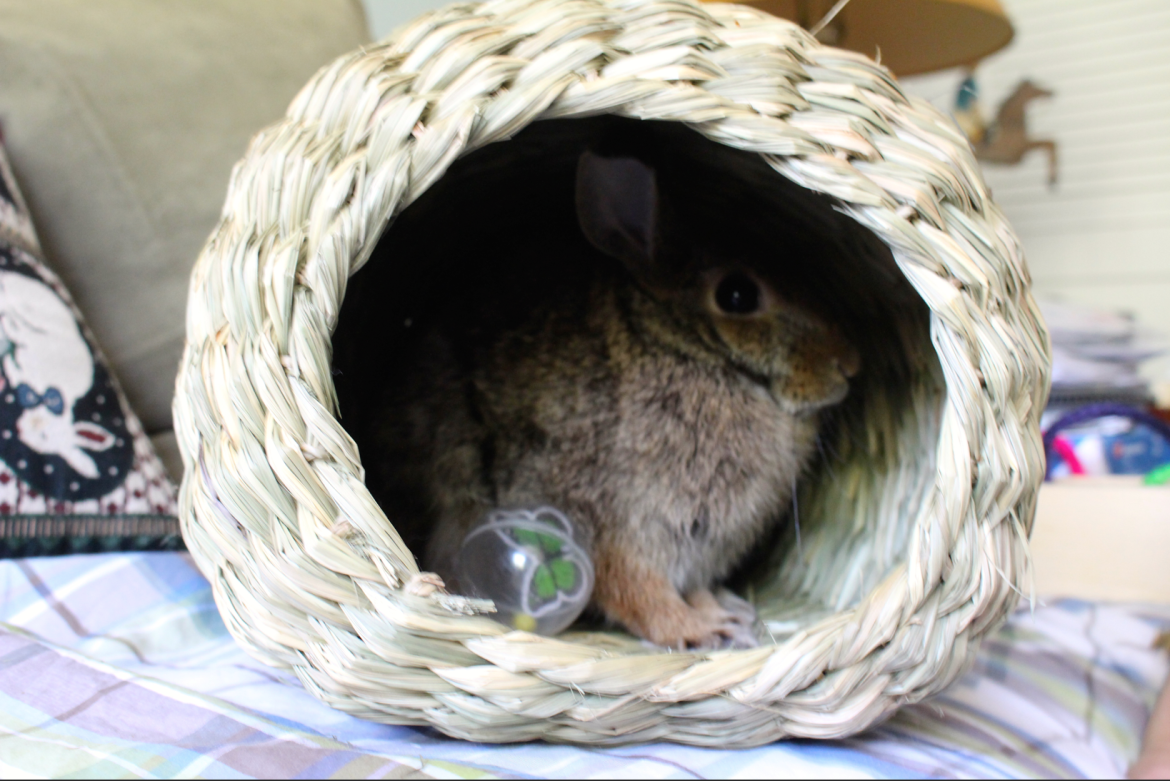 More Cottontail Bunny Fun Facts
If you need to mow your lawn and there is a rabbit nest smack in the middle of the yard (the mother selects a spot where she can see predators coming from a distance), experts recommend placing a plastic lattice laundry basket upside down over the nest and remove it after mowing.

Cottontail rabbits nest between March and September and have on average 4-5 babies in a litter, 3-4 litters per season!

The bunnies disperse when they are 15-20 days old. Nests are found in shallow depressions on the ground (Cottontails do not burrow) covered with soft grasses and lined with tufts of the mother rabbit’s fur. 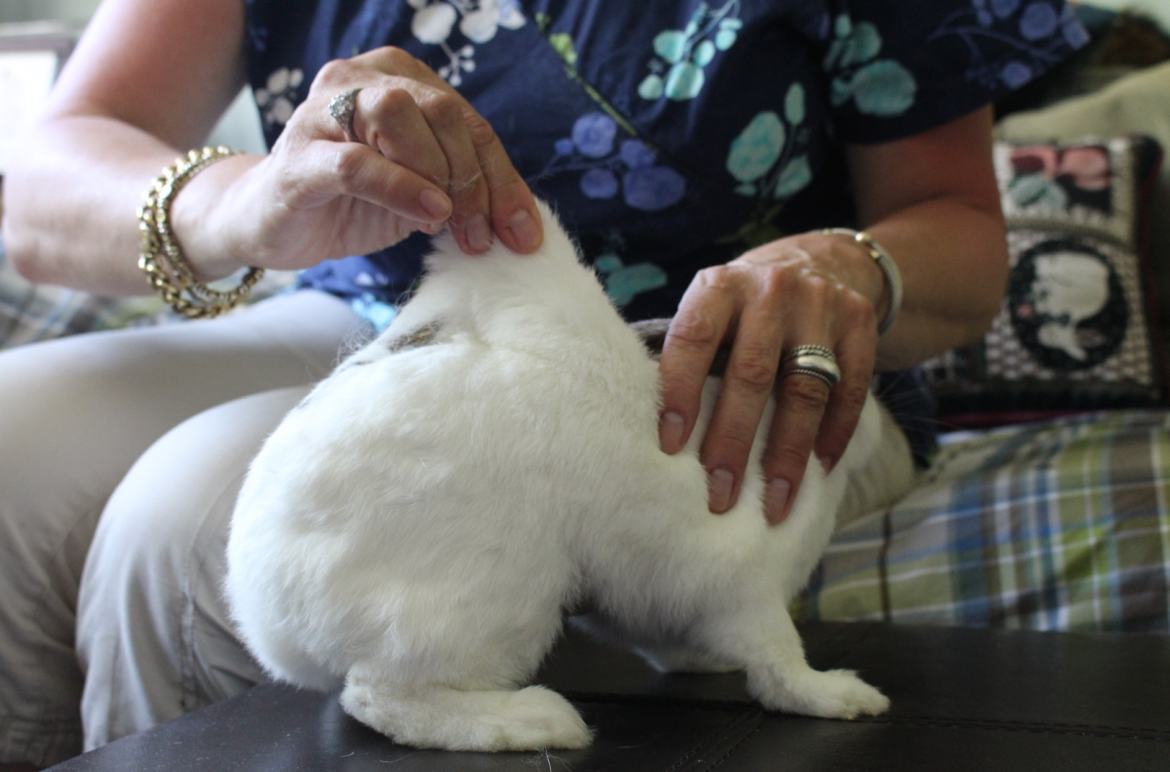 Suspect the baby bunnies in the nest in your yard are abaondoned? The probably aren’t, but there is a way to tell if the babies are in distress. Pull up the skin and let go. If it take 3 or 4 seconds to return to place, it’s likely the rabbit is dehydrated, a sign the mother is not coming back. Credit: Leslie Yager

If you are concerned that the mother has not returned to the nest, place twigs or light string in the formation of a tic-tac-toe board across the top of the nest before dusk. In the morning, after dawn check the nest. If the tic-tac-toe is in place, the mother has not visited. If it has been moved and the rabbits are still in the nest, she has been there to feed them.

“If you truly believe the mother isn’t coming back and the babies are in distress, check to see if they’re dehydrated by lifting the skin on their back. If it goes right back in place, they are fine,” Deborah said. “If it takes three to four seconds to go back into place, they are dehydrated and a wildlife rehabilitator should be contacted.”

“It’s a fallacy that if you touch a bunny that it’s mom won’t come back. But, if you must — if you need to move it out of the roadway and get it safe — it’s a good idea to rub your hands in dirt,” Deborah said. 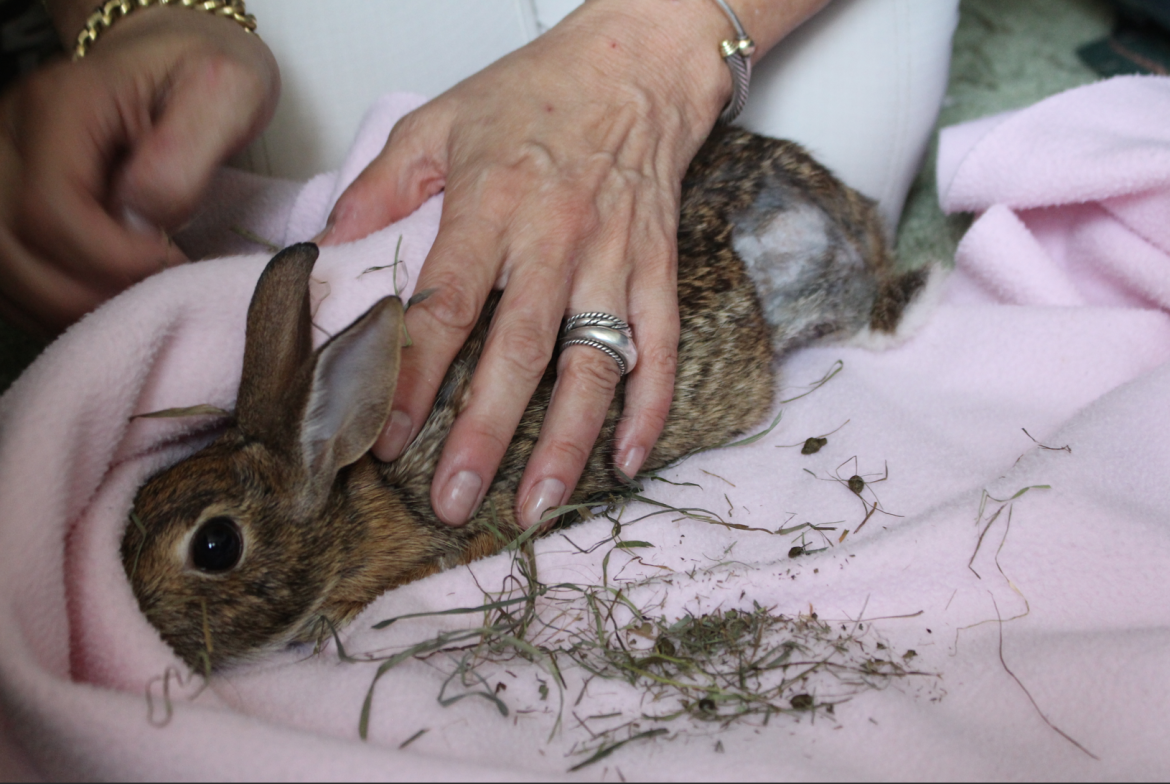 Deborah is rehabbing this pregnant Cottontail rabbit who was hit by a car and lost a leg as a result of compound fracture. Deborah says do not pick up a rabbit. Don’t chase it. If there is a mower or gardening accident or the mother has been hit by a car, wrap it in fleece or a sweatshirt or t-shirt and move to quiet, dark warm space. Credit: Leslie Yager

Deborah is on the board of directors of Connecticut Wildlife Rehabilitators Association  CWRAWildlife.org and the website is an excellent resource to locate a rehabilitator or find answers to questions about distressed wildlife.  Scroll down and you’ll find rehabilitation experts listed by species and location.

The rehabbers are all volunteers and are really busy but they monitor their email and will respond. Find CWRAWildlife on Facebook.

Connecticut Rehabbers by species/area:  The DEEP website lists wildlife by species with links to rehabbers by area. Click here.