After moving to Greenwich almost two years ago, I noticed that the Stars and Stripes festoon the town. The bridge on Putnam Avenue that crosses the Mianus River on the Riverside-Cos Cob border is lined with flags, for example, and many businesses unabashedly feature The Star-Spangled Banner. The working class folks, immigrants and the wealthy who inhabit this historic town all have reasons to hoist Old Glory.

Our national anthem also airs at local sporting events and patriotic celebrations. For a reminder that Greenwich can be like small-town USA, stroll past the Old Greenwich firehouse when the strains of the community band practicing Yankee Doodle, The Star-Spangled Banner and other patriotic songs stream onto the street. 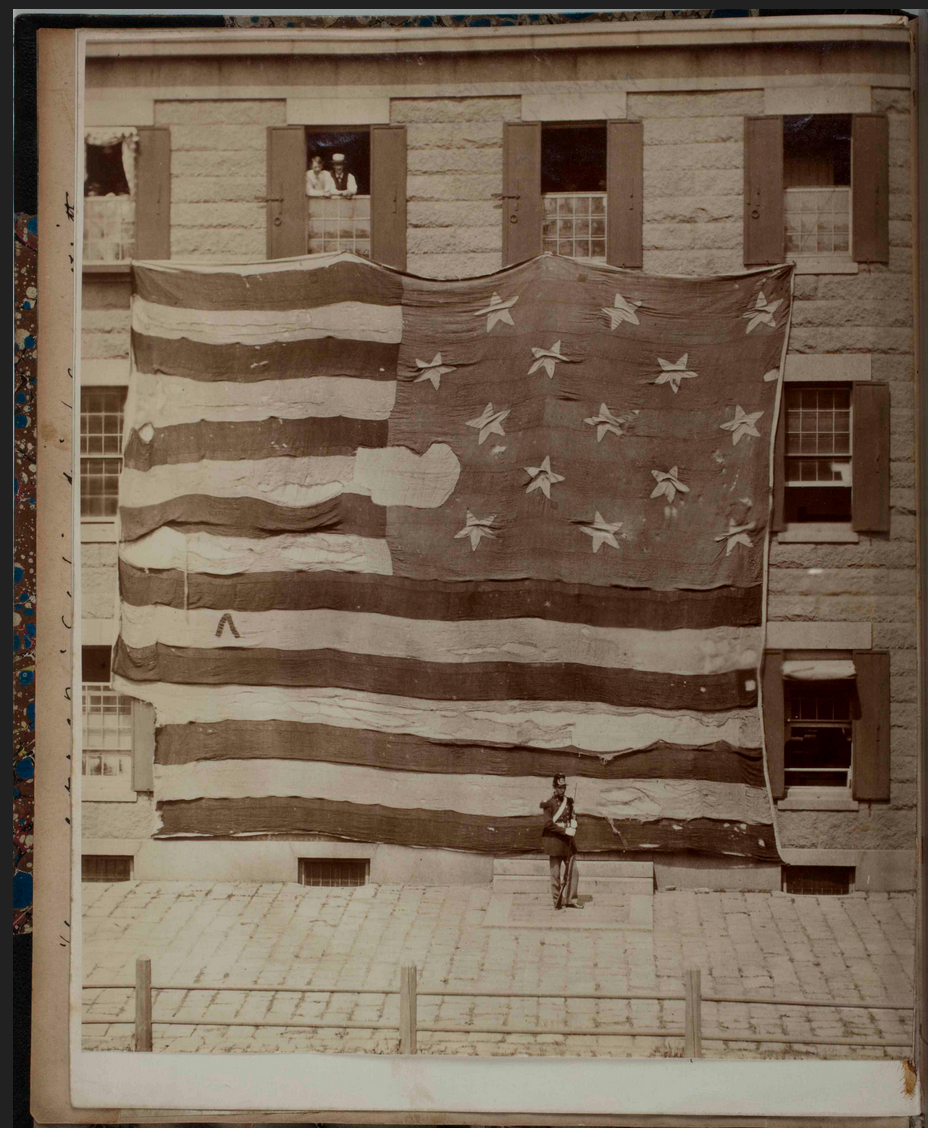 Last year, Americans celebrated the 200th anniversary of the national anthem, written during the War of 1812. Yet despite the song’s stature, it is surprising how many pervasive myths have persisted throughout the ages.

In part, the author of the anthem’s words, Francis Scott Key, is to blame for the lack of knowledge about the composition he created. Throughout his life, he refused to trumpet his association with the tune, never sought a dime of royalties and only spoke about it once – at a banquet more than 20 years after his moment of inspiration.

Myth 1: Key penned a poem that someone else later matched with the melody of To Anacreon in Heaven, a song written in England around 1775.

Truth: Key purposely fit the four verses that later became known as the national anthem to this popular patriotic ditty, a common practice of the time known as parody. In 1805, Key had fused original words with the same melody for another topical song about the Second Barbary War that included the line “Star-Spangled flag of our nation” and rhymed the words wave and brave.

After Key returned to his law practice and disassociated himself from the song, local actor Ferdinand Durang created confusion by taking advantage of Key’s modesty and claiming credit for pairing verse and tune. 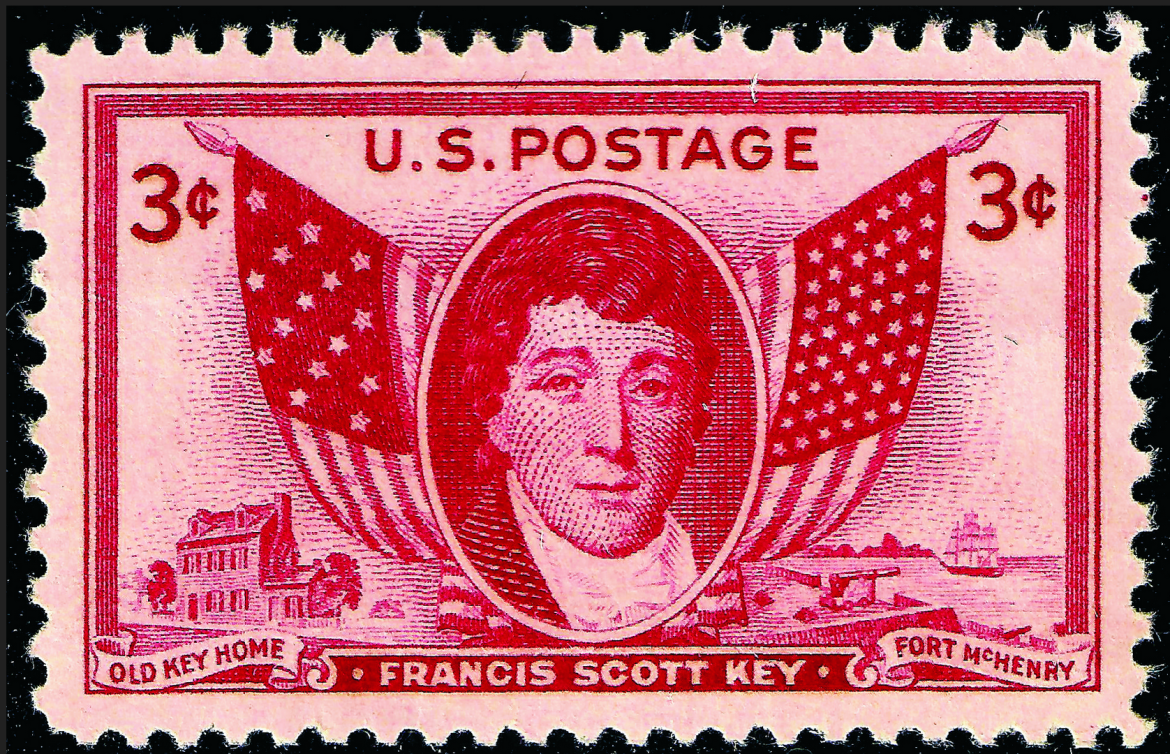 Francis Scott Key aficionados in Frederick rejoiced when the Postal Service issued this stamp to honor Key in 1948, the 50th anniversary of the Key Memorial dedication at Mount Olivet Cemetery. (Courtesy, www.usstampgallery.com)

Myth 2: Key called his poem “The Defence of Fort M’Henry.”

Truth: The original manuscript is untitled. Someone other than Key brought it to the offices of the Baltimore American newspaper, where a printer added this clunky title atop a sheet printed on one side – the first time the words appear in print. When Thomas Carr in Baltimore published the premier sheet music edition, he called it The Star Spangled Banner, a phrase Key repeated in all four verses (with a hyphen). Again, the author’s indifference perpetuated the falsehood.

Truth: Key opposed the War of 1812 and the lines “rocket’s red glare” and “bomb bursting in air” (as he wrote them) merely describe Britain’s naval assault on Fort McHenry. The fourth verse reveals his true, qualified take on warfare: “then conquer we must, when our cause it is just.”

Key’s taunting of then-foe England in the third verse, which many textbooks dropped in the early 1900’s after the two countries became close allies, is tame by anthem standards. Bloodthirsty nationalistic songs abound, including the anthem of France, which calls for waving a “Bloody banner” and watering the fields with the enemy’s blood. March of the Volunteers, the anthem of China, calls for citizens to sacrifice their blood and flesh to forge a new Great Wall.

Myth 4: The 1918 World Series marked the first time The Star-Spangled Banner aired at a baseball game. 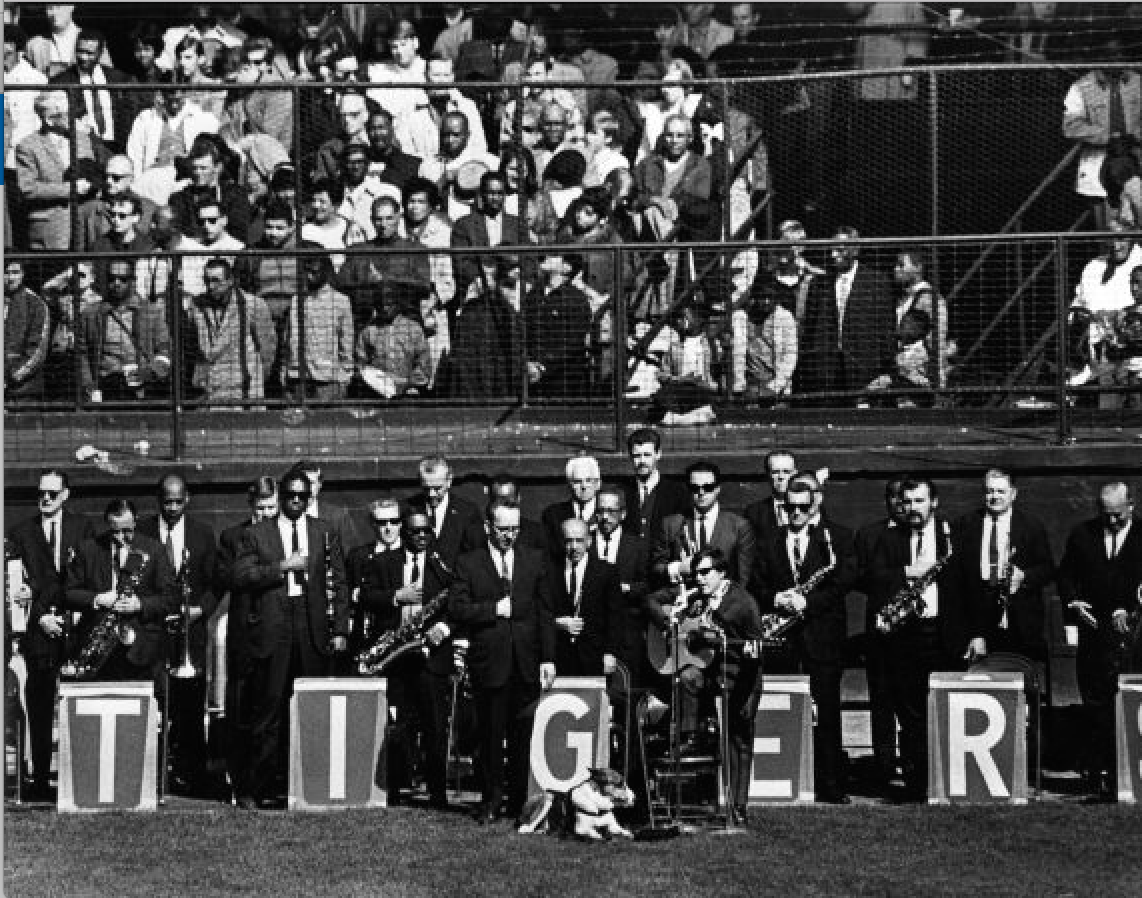 Jose Feliciano performing one of the most controversial versions in anthem history at the 1968 World Series. Contributed image

Truth: Many baseball historians have long know that the first documented instance of the song being performed at a game is 1862 in Brooklyn, N.Y. Also, several newspaper accounts in the 1890’s contain colorful descriptions of bands playing the future anthem at Opening Day ceremonies.

Truth: Renditions that upset traditionalists emerged during the Ragtime era in the 1890’s and that jazz bands in the 1900’s also took liberties with the melody and meter.

During the tumultuous hippie era, Aretha Franklin performed the first contested “soul-spangled” version at the 1968 Democratic National Convention in August and Jose Feliciano created an even bigger stir on live television and radio during the 1968 World Series, almost a year before Woodstock. Few Hendrix aficionados are aware that the flamboyant guitarist recorded a studio version that is radically different than his stage interpretations; yet his renowned rendition at Woodstock in 1969 gained widespread fame due to its inclusion in the concert film and soundtrack album. 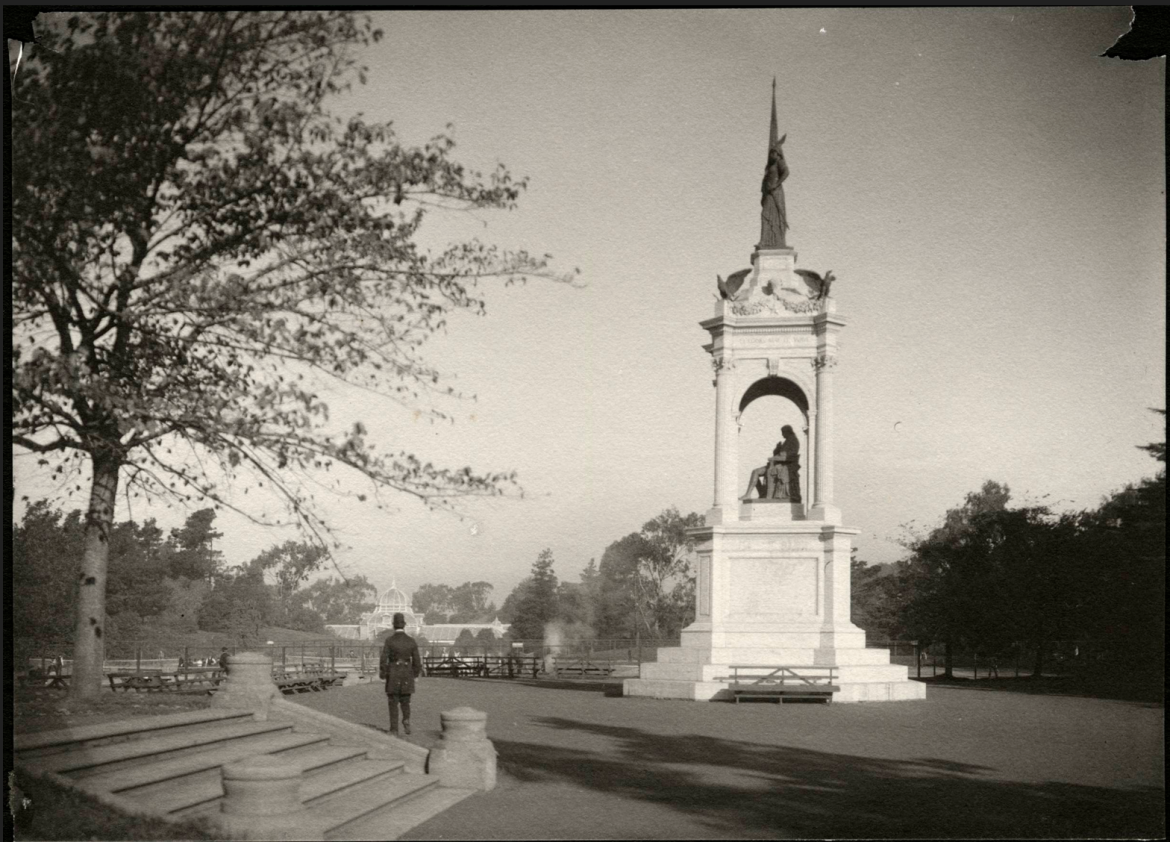 In San Francisco, the first monument in the country to honor Francis Scott Key towers over the figure in this undated photo. (Source: San Francisco History Center)

Perhaps the most pernicious myth about the national anthem is that the song is difficult to sing and the words are hard to remember. From The Star-Spangled Banner’s inception, Americans elevated it to the top of patriotic song pantheon and it remains open to interpretation and instrumental adaptation, leading to its popularity. The first verse – there are four – consists of just 81 words.

Skittishness toward the song is largely crooner Robert Goulet’s fault, as chronicled in the last chapter of my book, and has helped foster a nationwide mental block. Proving that the song can indeed be sung by a randomly assembled group of Americans, singer Rene Rancourt dropped the mike a few words into his rendition at the first Boston Bruins home game after the Boston Marathon Bombing and let the crowd deliver a powerful version.

Beyond the falsehoods, few Americans are aware of the many fascinating, but obscure, facts about the national anthem. Who knew, for example, that Shakespeare coupled the words “star” and “spangled” in two of his plays, for example, or that the original song to which Key fused his words is indeed a paean to the joys of sex, music and drinking alcohol?

In addition, anyone carrying U. S. currency has a phrase from the song in his or her purse or pocket: the federal government first began printing “In God We Trust” on coins during the Civil War and on all paper bills since 1957. The motto derives from the line “In God Is Our Trust” in the song’s fourth verse.

After two centuries of confusion and controversy, active patriotic organizations and individuals in Greenwich are in a position to help correct the many falsehoods surrounding our national anthem and to forge an enhanced appreciation for this wrongly maligned song.