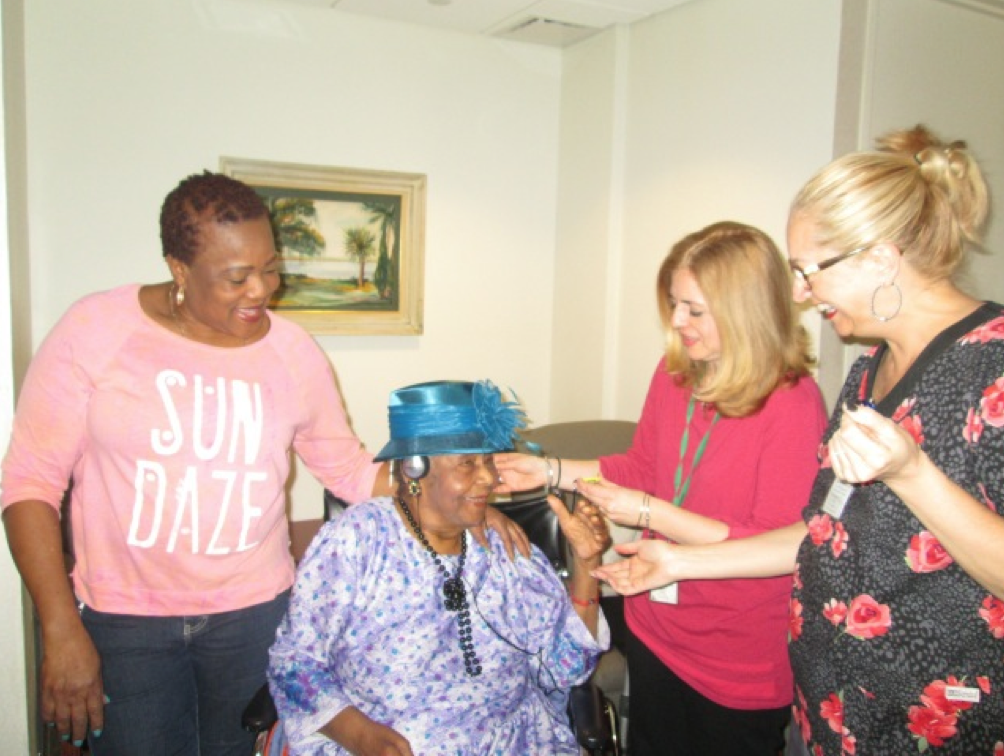 It’s probably safe to say that for most of us, music is an essential part of life. From the first nursery rhymes we learned as toddlers to the pop songs of our teenage years and the show tunes or classical music of adulthood, familiar melodies can instantly bring us back to another time and place because our brains are hard-wired to connect music with long-term memory. This is true even for those suffering from severe Alzheimer’s disease or other forms of dementia. Music resonates.

That’s why The Nathaniel Witherell is working with Music and MemorySM, a nonprofit organization that brings personalized music into the lives of the elderly or infirm through digital music technology. According to Lynn Mason, a board-certified music therapist at the Witherell, “The goal is to create and provide personalized playlists using iPods to enable those struggling with Alzheimer’s, dementia, and other cognitive and physical challenges, to reconnect with the world through music-triggered memories and emotions.”

Among the Witherell’s first participants in the Music and Memory program is Cordella Shaw, age 94, who recently listened to her iPod in one of the Witherell’s newly remodeled porch areas and enthusiastically sang along with her beloved religious and gospel music. According to Jayne Kennelly, RN, nurse manager at the Witherell, “Mrs.

Shaw was noticeably more alert and chatty for hours following listening to her music on the iPod. It was wonderful to see.”

Witherell’s Music and Memory pilot program is beginning with Shaw and four other residents who do not respond well in a group setting, as they often experience too much stimulation or confusion due to their dementia.

“Our target population is prone to social isolation, anxiety, and depression. The Music and Memory program can be another tool for reaching these residents and helping them to connect more to the world around them, organize their thinking, and function at their highest potential. On another level, it just brings pure joy,” Mason explains.

She says Witherell’s Music and Memory program is dependent on a true “person-centered care” approach, with a resident’s musical interest being gathered from staff, family, and friends, who become part of the team that develops a very tailored, personalized playlist for each resident and helps him/her access the music.

“Playlists can include a lullaby their mother sang to them as a child, their wedding song, a favorite opera, gospel music, or folksongs, or we may search for songs that were popular during the resident’s early years,” said Mason.

While Mason was approached about Music and Memory by its founder Dan Cohen in 2012, the program had to be tabled until Witherell’s Project Renew renovation project was completed in late 2014. In mid-January, some 20 to 30 Witherell nursing, recreation, volunteer, and chaplaincy staff members received the training required for the program. The Witherell is now one of only four organizations in Fairfield County and a dozen in Connecticut to become a Music and Memory Certified Facility.

Thomas Saccardi, a member of The Witherell’s Board of Directors who enthusiastically championed the program, also attended the training. Saccardi, who first heard about Music and Memory when his wife took him to see a documentary about it called “Alive Inside” (see clip from movie here) says, “I’ve also seen the program up and running at another nursing home facility and watched the residents miraculously respond to the music. It was clear evidence we should do this here, and when I presented the program to the board they embraced it wholeheartedly.”

The Music and Memory website provides documented research that details how music can tap deep emotional recall in people with severe Alzheimer’s or dementia. While short-term memory for names, places, and facts is compromised, long-term memory in this population is often well preserved. Favorite music or songs associated with

important personal events can trigger remembrance of lyrics and the experience associated with the music. In addition, music has been shown to calm chaotic brain activity, enabling the listener to focus on the present and regain a connection to others. Those with Alzheimer’s and other forms of dementia reconnect to the world, which improves their quality of life.

Mason says the goal is to eventually expand the Music and Memory program at the Witherell outside the domain of the nursing home and into the short-term rehab center, where it can help reduce pain and boredom experienced by rehab patients and increase their ability to relax. “For now we are starting small, but there is great potential for broadening this terrific program,” she says.

Community members who would like to assist in the development of this project are welcome to donate gently used or new iPods (especially iPod shuffles), iTunes gift cards, chargers, and CD’s (especially Pop, Broadway, R&B, Motown, jazz, religious/gospel, folk, and country music). In coming months, the Witherell will be looking for volunteers who would like to help residents with the Music and Memory program. For more information, please call Lynn Mason at 203.618.4217.

WATCH THIS! A video clip of Henry, who was “reawakened” by listening to his Cab Calloway favorites, from the 2012 documentary, Alive Inside: A Story of Music and Memory.

Nathaniel Witherell is a short-term rehab and skilled nursing center located on 24 beautiful acres just two miles from downtown Greenwich. Witherell is committed to person-centered care provided by a compassionate and experienced staff. Rehab is available seven days a week.

The nonprofit is owned and operated by the Town of Greenwich and has been serving the community for over 111 years. Witherell reflects the community’s collective commitment to provide for the town’s elderly when home care is no longer an option. The vast majority of residents have lived their entire lives in Greenwich and supported the community in which we live.

Nathaniel Witherell was recently recognized as “one of the best nursing homes in Connecticut” by U.S. News & World Report. For each year since the Center for Medicare and Medicaid Services adopted its rating system in 2008, Witherell has enjoyed the Center’s coveted 5-star rating, a distinction granted to only 19% of the nursing homes in the United States.