The spotting of a Great White Shark near Greenwich waters has everyone in an excited buzz, and now more than ever, the shark craze continues as the Sharks! exhibit at Bruce Museum that provides the public an interactive and scientific glimpse of the most powerful predators exposed.

For avid researchers and fans alike, the Sharks! exhibition encourages visitors to broaden their perspective beyond the fiction of the notorious shark propaganda that depicts them as terrifying and savage creatures, and to look deeper into the reality of necessary shark conservation.

Past the Silk Roads Exhibit, visitors enter a new realm of discovery as they come across the first stop of their shark odyssey, a small window that holds a real-life size 11 foot model of the Great White himself and the modern advancements and research taken to understand and learn more about shark species. Trackers, such as the ambitious Remus 500, captures footage of shark behavior and even special moments of shark interactions with the Remus as it feistily attacks the strange tracker.

Surrounded by the amazing casts and rare fossils of sharks throughout the ages, visitors learn about the adaptations crucial to shark survival, such as the various teeth evidence, from smooth to serrated, that prove the early adeptness of these creatures during the dinosaur era. Spirals of teeth, cartilaginous skulls and spines, and the evolving live proof of them in modern sharks such as hammerheads, with their electroreceptors and body structure, are fascinating to behold firsthand and defy the myth that sharks are an ancient and unintelligent species.

Among the fascinating lessons found in the Sharks! exhibit, is the development of live domestic bamboo shark eggs and the first stages of a baby shark (or pups) in a tank.

Although most of the pups are still growing in their egg case, an early pup just born last week can be viewed exploring its surroundings and leisurely swimming around, impatiently awaiting more pup company.

Undeniably, the biggest attraction, is the model of the ancient megalodon’s jaw that lived 2.3 million years, a 60 ft long predator whose diet consisted of early whales, large fish, and other sharks. Just the size of its mouth gives off a spine-chilling thrill and appreciation for history’s gigantic predator. 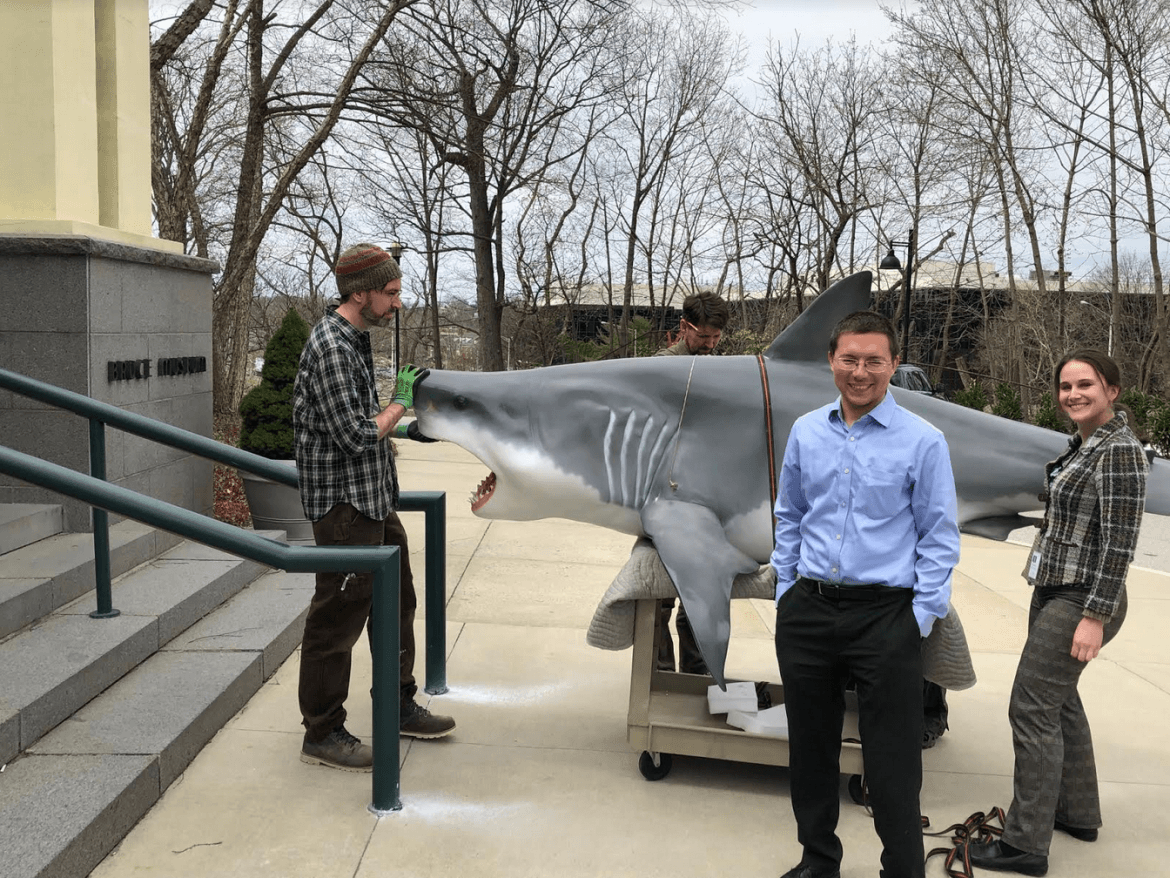 These awe-inspiring creatures are a sight to see, and hold much more significance than catering to the horror-hungry audiences of franchises such as “Sharknado” and “Jaws”, that present an over the top negative outlook on sharks. According to Kate Dzikiewicz, Bruce Museum’s passionate science professional and curatorial associate, even if the media and horror shows mislead the public of the shark’s aggressiveness and ‘cruelty’, one cannot deny that “People want to learn more about sharks”. “In reality, people don’t have much to fear about sharks”, she explained. Only 1 person dies from shark attacks per year, if one takes into account that 30-50 people die from more dog attacks than shark attacks per year, the idea of their dangerous man-eating nature is obsolete. Rather, 100 million sharks are killed by humans per year which lead to the endangerment of essential species that impact their marine environment and the entirety of the food chain. Thankfully, the enactment of shark protection laws has brought back new hope for the declining rate of shark species. Even more, the appearance of sharks found in New England is great news for marine life.

There’s still time to enjoy the fantastic kings of the ocean in Bruce Museum, located in 1 Museum Drive in Greenwich. The exhibit runs through September 1, 2019.

Admission for adults is $10, students with valid ID is $8 and kids under 5 have free admission. For more information visit brucemuseum.org

Andrea Gonzalez is a member of the Greenwich High School class of 2019 and will enter UConn Stamford in the fall.