A New Canaan nonprofit organization, carpenter and handyman are earning high praise this weekend after orchestrating what’s being called the “miraculous” rescue of a cat that was stuck in a wall for five days. 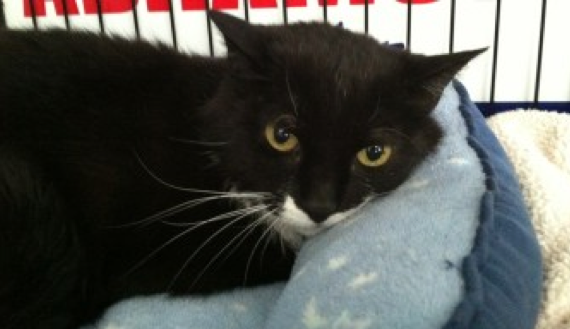 Here’s lady following her ordeal, trapped for a 128-hour stretch with no food or water in what essentially is a shaft between walls at Schoolhouse Apartments. Photo courtesy of Strays & Others

Lady, a black-and-white domestic short-haired cat, went missing at about 11 a.m. Monday and was finally freed around 7 p.m. Friday from the very narrow wall space between a closet and bathroom at Schoolhouse Apartments, according to the South Avenue senior housing complex’s manager, Tatiana DeJesus.

The young feline’s ordeal started soon after she apparently leapt onto an upper cabinet and then through a drop ceiling at the apartment of the resident who was fostering and seeking to adopt her, DeJesus said.

“One of my residents came to me almost crying,” DeJesus recalled.

Staff members looked hard for the animal but couldn’t find her for days until DeJesus spotted an area in the back that looked out of reach. 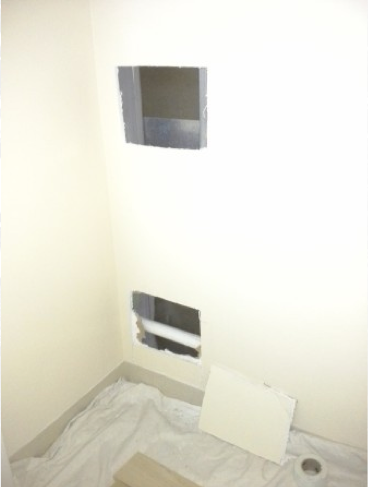 Here are the holes that Mike Bonnani, a carpenter and husband of Strays & Others volunteer Wendy Bonnani, cut carefully into a wall between a closet and bathroom at Schoolhouse Apartments in order to rescue Lady the cat—a successful mission that some are calling a “miracle’ after 128 hours. He patched up the wall like new prior to leaving. Photo courtesy of Strays & Others

That’s when Leo Borjas, one of two maintenance workers at Schoolhouse, crawled gingerly along the length of the ceiling and spotted Lady “in between two walls all the way in the back,” DeJesus said. But even he couldn’t get down into an area about five feet wide and eight feet down.

Wedged next to a pipe, the cat was unable to climb out again.

Through all of this, efforts to locate Lady had been bolstered by the cat’s rescue group Strays & Others, a no-kill animal shelter and donor-supported New Canaan nonprofit that helps rescue, foster and find permanent homes for needy pets.

“If she cried out for help, no one could hear her,” said the organization’s founder and director, town resident Claudia Weber. “We set up a humane trap and laced the apartment with treats of sardines and crunchies, but nothing was touched. We were at a loss, and incredibly worried for this poor cat.”

When Lady finally was spotted by Borjas, Weber reached out for help and her call was answered by S&W Building and Remodeling carpenter Mike Bonanni. He’s the husband of Strays & Others volunteer Wendy Bonanni—who also was on hand—and, using equipment to figure out about where Lady was and then marking the wall, carefully removed sheetrock around the area where the cat had become trapped.

Weber rushed Lady to the Veterinary Emergency and Referral Center, and the cat—after treatment for deyhydration—is OK.

Weber gave credit to Mike Bonnani. “It was extremely kind of Mike to come to the rescue along with his wife, Wendy. We had been looking for some sign of Lady for four days and so when we found her, it really was an emergency and we needed somebody fast. And on a holiday weekend too.”

“Tatiana wouldn’t give up the search, and without her relentless efforts at searching the area over and over along with all of us, the outcome may have been grim instead,” Weber said. “Her wonderful maintenance person, Leo, was the one to shimmy over the fake ceiling and found two cats eyes staring back up at him.”

Weber said that Lady is now back at the Strays & Others temporary cat shelter “where she is resting comfortably after her big ordeal.”

It’s an outcome that would not have been possible without Weber, DeJesus said.

“Claudia really deserves a lot of praise because she was standing by and they did a great job,” DeJesus said.

“She really stepped in when we needed her, and has stepped in with different issues with others that we had, even if it’s not particular to adoption, and we are very grateful because you can see that she does not turn her back on these pets.”

The senior resident at Schoolhouse Apartments who had been minding Lady and hoping to adopt that cat will receive another that is more appropriate for her, Weber said.

“As far as Lady goes, she will just have to wait for her next opportunity for someone—without a drop ceiling—to reach out and take a chance on a black and white kitty who is friendly, affectionate and sometimes unsure of the world around her,” Weber said.

Strays & Others is currently caring for more than 60 dogs and cats while they await forever homes with loving adoptive families. The organization is looking for foster homes for both dogs and cats, and direct hands on help at the cat shelter. Even if you can’t foster, or adopt, there are many ways to help.  Learn more about Strays & Others here and here. You may also contact them at 203-966-6556 or email them at [email protected] Strays & Others will be celebrating its 30th anniversary next year and is also seeking volunteers to join in the celebration planning efforts.