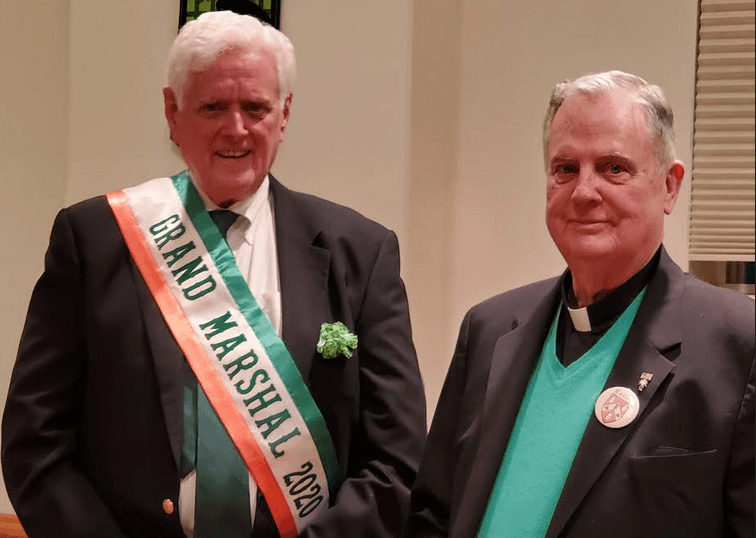 John Toner was installed as the Grand Marshal of the 46 th annual Greenwich St. Patrick’s Parade by the Greenwich Hibernian Association on Saturday evening, March 7, at the organization’s annual St. Patrick’s dinner dance. A sellout crowd of over 150 people celebrated the event. Mr. Toner was presented with his Grand Marshal sash by 2019 Grand Marshal, Monsignor Peter Cullen. The Parade will be held on Sunday March 22 at 2:00pm.

Mr. Toner was born in Greenwich, the son of Bartley and Rose Toner, both immigrants from Ireland, he from County Donegal, she from County Tyrone. John graduated from St. Mary Grammar School and St. Mary High School. He then graduated from Fairfield University with a degree in English. John finished his education with a Master’s Degree in Education from Manhattanville College. John spent two years in Ghana with the Peace Corps teaching English and Literature.

After his time in the Peace Corps, and a brief teaching career in America, John began what became a 27 year career in Finance with Chase Manhattan Bank, rising to the position of vice president. Since retiring from Chase, John has devoted his time to serving his home town of Greenwich, both in Town government and in the non-profit sector.

Mr. Toner began serving on the Greenwich RTM in 1998 representing first District 2 and then District 9 until he stepped down upon being named Selectman in early 2015. John has sat on several Town committees including Parks and Recreation, Transportation, POCD Implementation, Appointments and Public Works. He has been a long time member of the Republican Town Committee where he served as Treasurer for six years. John was named Selectman in early 2015 upon the passing of David Theis, was re-elected to that position and retired in 2019.

Many local not for profit organizations have benefited from John’s involvement. For many years John volunteered at the book swap program at the Town recycling facility. John was President of the volunteer auxiliary at Greenwich Hospital where he coordinated 700 volunteers.

He also served two terms on the Hospital’s Board of Trustees. John has been not only a volunteer driver for Call-A-Ride but also served as its President and Treasurer. TAG (Transportation Association of Greenwich) also benefited from John’s services on its board for many years. He serves on the Board of Greenwich Green and Clean, the Commission on Aging’s Age Friendly/Dementia Friendly Project, St. Michel the Archangel Parish Council and the Friends of the Byram Schubert Library. John is a member of the Order of Malta.

Parade information and updates will be posted on the Greenwich Hibernian’s website.