Impact Fairfield County kicked off its 5th year of grant making this week with a gathering of nearly 100 women at Grace Farms in New Canaan where members heard from the 2019 Impact FFC Grant winners.

Wendy Block, co-founder and co-president of Impact FFC highlighted the powerful and emerging trend of collective giving, noting that there are now more than 50 Impact 100 chapters around the world and another 50 in formation.

When Impact FFC started back in 2016, there were only 18. Women are contributing in unprecedented ways, leveraging their networks and their resources for philanthropy, and Impact FFC is a significant force in that movement.

Whether these women are joining because they are new to the area and want to get involved in meaningful philanthropy with other women, newly empty nesters like Deedee McKenna of Greenwich who “love that Impact FFC would give me an opportunity to build my skills in understanding what goes into grant making and the needs of nonprofits in Fairfield County,” or women who don’t necessarily have time to volunteer but want to contribute $1,000 and turn it directly into a $100,000 grant transforming the lives of those suffering in our community, membership in Impact FFC is growing, and the difference these women are making together is powerful. 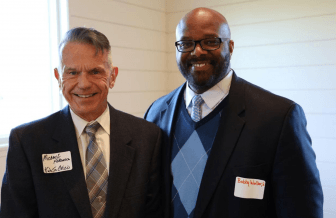 To share the results from Impact FFC’s most recent 2019 $100,000 grant winners,
Wendy introduced community leaders representing KidTalk from The Boys and Girls
Club of Greenwich and Kids in Crisis, and The Pro Bono Civil Legal Center for Victims
of Domestic Violence from The Center for Family Justice in Bridgeport.

The $100,000 grant funds an on-site mental health professional to serve the needs of those kids and their families.

The impact of KidTalk has been immediate. By the end of the social worker’s first week, kids were knocking on her office door non-stop asking to speak with her. The response so positive that Walker felt compelled to switch her office with his so that the kids could access her more easily.

Illustrating KidTalk’s success quantitatively, Michael pointed out that in the program’s first two months, 64 individual kids have received mental health services, and “the fact that 55% of those were self-referred, meaning they sought out help independently, speaks volumes” about the need and the difference the program’s making.

In its first seven weeks, the program has provided legal services for 34 clients, representing 74 hours of legal work and a value of almost $28,000. Moreover, 86% of
those clients are receiving wrap-around services from CFJ to further support the victims
and ensure their recovery. To the beneficiaries, legal representation can mean the
difference between a safe, secure, and self-sufficient life, versus one of poverty,
homelessness, and continued victimization. Both Debra and Angela admitted the
program is truly “life-changing, and in many cases saving lives.”

Steviann Martines, Co-President of Impact FFC with Wendy, concluded the event by updating members on the transformative impact the organization’s previous $100,000
grant winners are having on the local community. “Because of 100 women, we sent 150 children in Stamford with zero preschool experience to a 5-week summer program to get them ready for kindergarten, sexual assault victims statewide are now being treated by trained nurses on staff in local hospitals, and the mobile outreach van we funded to help the 1,500 homeless or unstably housed youth across our county has not only improved the lives of a previously elusive homeless population, but has facilitated a $3 million grant from the U.S. Department of Housing and Urban Development to end youth homelessness in Fairfield County.” In fact, the van was parked right outside the venue for the Kick-Off and members were invited to take a tour and meet their staff as they left the event.

Although powerful progress is being made, Steviann stressed just how much there is left to do. “It is our $100,000 grants that allowed these organizations to dream big. It’s our partnership with you, our members, that enables them to fulfill these dreams and accomplish great things.”

This year, Impact FFC’s 5th Anniversary of giving, the goal is to engage 200 women and
provide $225,000 in grant funding to reach the $1 million total grant funding milestone.
Commemorating this 5th year, Impact FFC will also be offering a 5 Year Anniversary
Grant of $50,000 to pilot a new grant stream supporting “Core Mission Grants” to
enhance existing programs. Past Finalists who were not awarded a $100,000 Impact
FFC Grant have been invited to apply for the Anniversary Grant.

Wrapping up, Steviann encouraged those who weren’t yet members to join, so that “we
as a group can say, ‘Wow!’ We’ve given $1 million over 5 years to create an impact in
Fairfield County. That sounds amazing. And we are just getting started!”