North Mianus Elementary has its Spelling Bee Champions! Neha Iyer and Isaac Dcruz have spelled all the necessary words to get to the top.

The top two finishers from the school bee typically proceed to the regionals in March, but that is up in the air this year.

“No one but their parents can comprehend just how hard these students worked to get to the finals of our school bee. Several have been trying for three years,” said Ms. Ashcraft, the teacher trainer of the intrepid spellers.

The school-wide Bee was held in the gym on Tuesday, December 16, and it went an amazing 39 rounds.

Ms. Ashcraft reports that there were 12 finalists, and that all students made it to at least round seven, as the competition was very stiff.

Neha Iyer, fifth grader and third time participant, was the Champion. She placed fifth in 3rd grade, third in 4th grade and this year she finally ended up on top.

Surprisingly Sisyphean, bhangra, noctambulist, synecdoche and many other very challenging words were successfully spelled; however, below you can see the words that ended up stumping the finalists.

“I had to work really hard for three years and not give up. I am so excited to hopefully get a shot at the National Bee,” Neha said.

Neha says “hopefully” because there seems to be a bit of a snafu in the normal path to the Scripps National Spelling Bee. Area participating schools recently learned that the organization that previously ran the Regional Bee will not be hosting it this year. 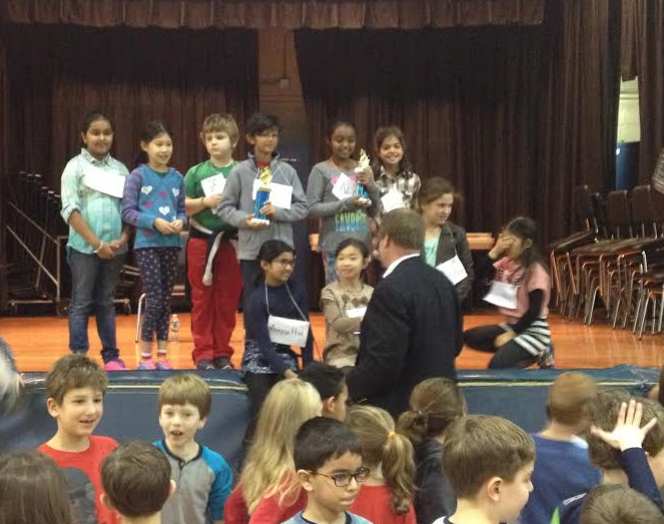 “I am so disappointed that there is no regional bee this year,” said Ashcraft. “I really hope a sponsor comes forward.”

There is a way to self-sponsor a school or district champion but the costs are $3,200 plus the transportation costs for two (the champion and a parent/guardian). The 2015 Spelling Bee will be held in the Washington, D.C. area from May 24 through May 29.

Hopefully a media outlet, university or education-supporting business or community organization will come forward and agree to seek out a sponsorship for the Scripps National Spelling Bee regional spelling bee. Potential sponsors deal directly with Scripps, pay a sponsorship fee of $1,350 and fund certain travel expenses associated with sending our area’s spelling champion and one parent to the National Finals. Further, the sponsor agrees to organize and administer a spelling bee program for all schools in its community.

If there is an organization in the Greenwich community that may be interested in sponsorship, they should contact the Scripps National Bee through their website: spellingbee.com. It may be too late to be the sponsor of a big regional bee this year but there is time to establish them as a regional sponsor for next year.

The folks at North Mianus School are looking for a sponsor for Neha this year. Anyone interested to should contact Ms. Ashcraft at the school, [email protected]ct.us