American Eel has had an ally in Greenwich High School rising senior Daniel Gazaille for four years. That’s how long his Eagle Scout project has been in the works. 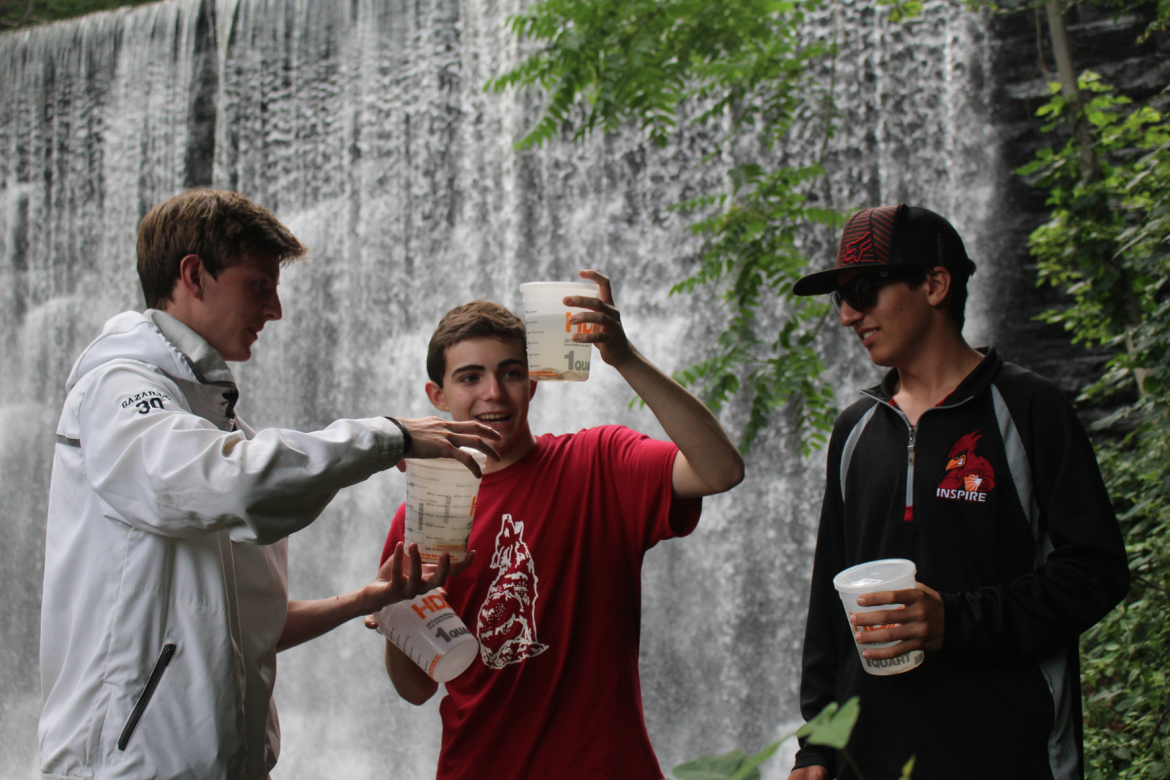 Dan Gazaille and fellow environmental science enthusiasts collect eels from Dan’s Eel Bot 2.0 trap, sparing the baby eels from having to climb the steep dam. The population of American Eels is dangerously low. Eels are a keystone species, which means they are both prey and predators. Credit: Leslie Yager

“It’s been a series of trial and error,” Daniel said on Thursday afternoon after he and a group of fellow GHS students interested in environmental science collected buckets of eel from traps in the Byram River. 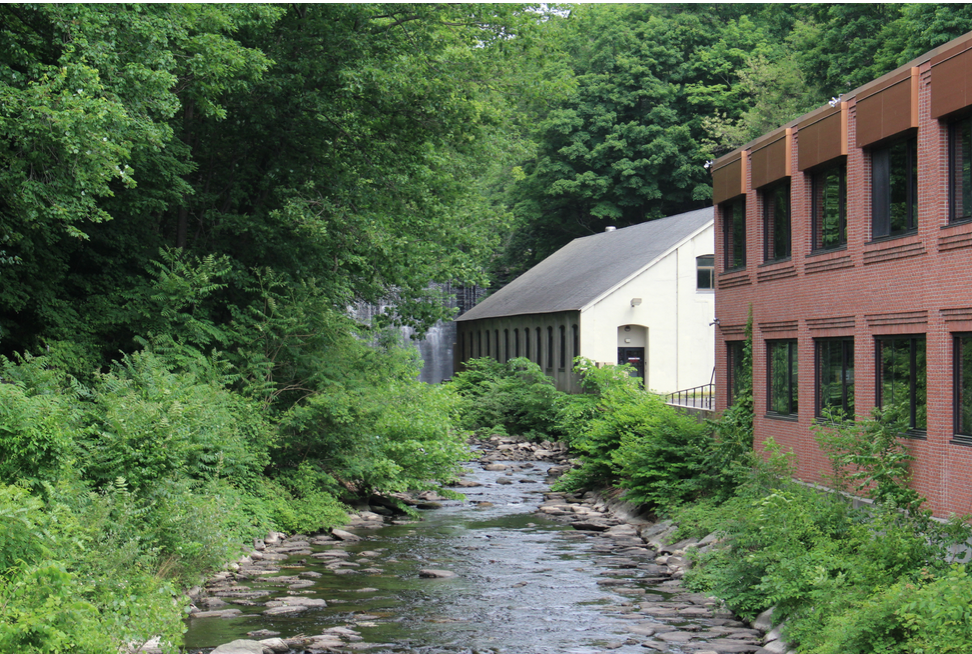 The former Russell, Burdsall and Ward Bolt & Nut factory at the intersection of Comly Ave and Pemberwick Rd, once water powered, is now an office complex. Credit: Leslie Yager

Daniel explained that Greenwich has 43 dams and along the Byram River. In Glenville, where a dam once created  a to power the bolt factory, is a tall one indeed. Eel are able to climb it, but the casualty rate is high.

Dan worked on the project with  fisheries and wildlife biologist, Joseph Cassone for four years. Though Mr. Cassone no longer works for the Town of Greenwich, he has come back to help Dan.

Cooperation for the project also included the owner of the former Russell, Burdsall and Ward Bolt & Nut factory which once harnessed water power created by the adjacent dam. Aldo Pascarella whose father bought the site of the former nut and bolt factory from the Mead School, gave Dan access to electricity to power his pump. An extension cord begins at the old bolt factory, wraps around the foot of the waterfall to the Eel Bot 2.0 trap. 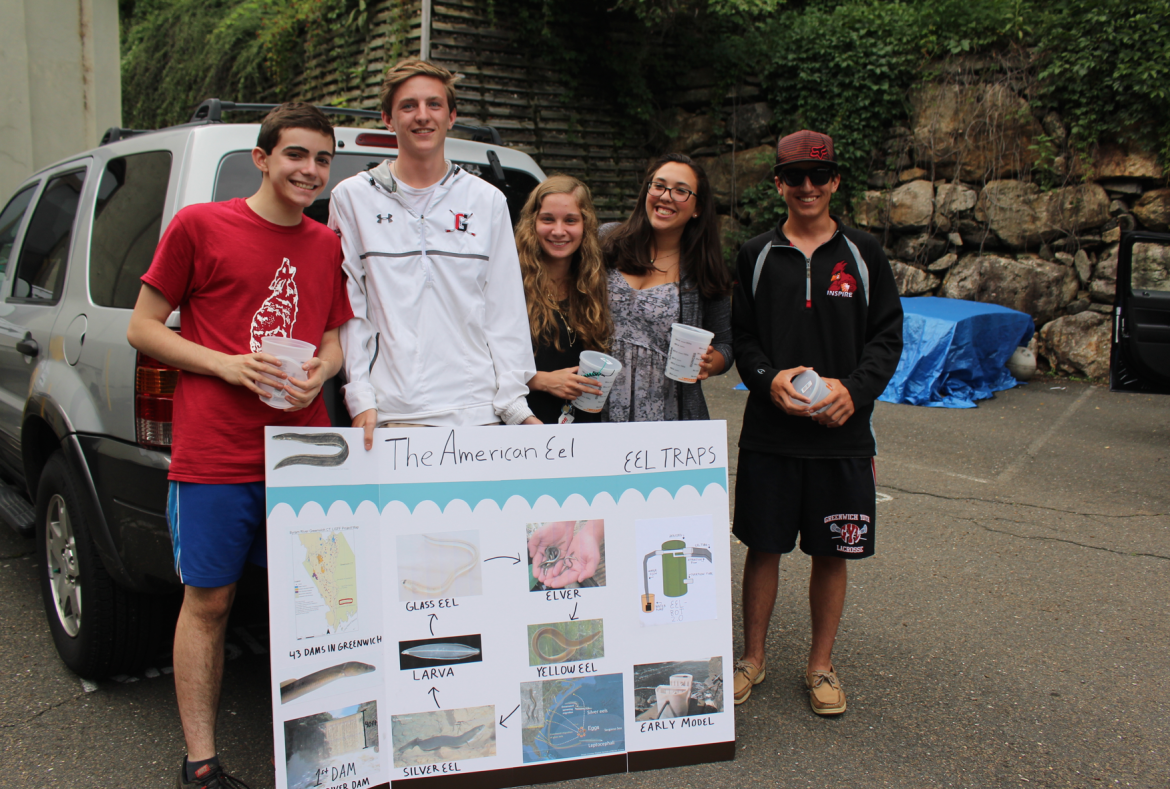 Dan explained that though dozens of dams in Greenwich are a barrier to eel who head up the Byram River. He said there is little likelihood of their removal because they are beauty features toed in to property values and to remove them would result in adjacent properties diminishing in size.

Dan’s Eel Bot 2.0 trap spares baby eel from having to climb the steep dam. And though they are avid climbers who could be witnessed scaling the plastic edges of the plastic buckets used to relocate them to safe calm waters upstream, many don’t make it up the dam wall by the old bolt factory. This is a problem. The population of American Eel is dangerously low. Eel are a keystone species, which means they are both prey and predators. When they are babies they are a delicious meal for all type of fish. For their part, the baby eel love to eat bugs.

When the eel have a chance to mature, they go through stages. After larvae, they become Glass Eel, then Elvers, Yellow Eel and finally Silver Eel. The ultimate destination of their migration, which involves all that climbing, is the Sargasso Sea, where female lays eggs and dies. Toward that end, Dan’s plan is to deliver as many baby eel to Camp Seton as possible.

“I picked a spot that was nice and calm. And shallow,” Dan said. “This way they have access to lots of bugs to eat but the water is too shallow for fish to swim in, and so the baby eel won’t get eaten by the fish,” he added, explaining why he chose not to release the baby eel in the large pond at Camp Seton.

Challenges for Dan went beyond perfecting his Eel bot trap. He had to deal with the seasonality of the eel cycle. Specifically, he said that eel lose their instinct to climb when the weather heats up. Ideally, the removal and relocation of the baby eel would be April or May.

Still, on Thursday, along with Kate Soler, Amanda Scopelliti, Joe Schiro and Kyle Kelly, Dan successfully collected dozens of baby eel from his Eel Bot 2.0 trap and drove them to Camp Seton to be released.

The students were all pleased at the result. “They absolutely got a fast-forward button,” Joe said, of the eel ride in a car from the bolt factory dam to Camp Seton.

On his part, Dan smiled as he packed up the empty buckets at Camp Seton. “They’ll be fine now. It’s shallow and calm and they can rest for a while, eat a lot of bugs and then carry on their migration.” 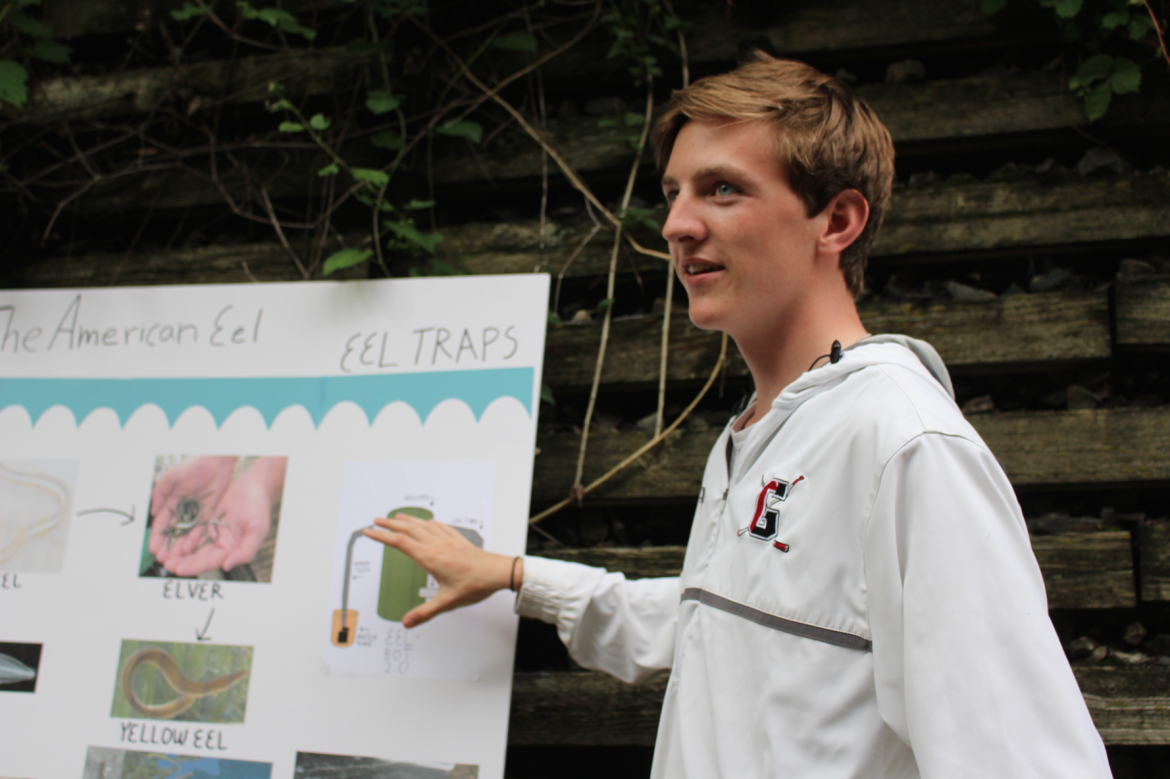 Dan explained the evolution of his eel catching method to an audience of environmental science students. Dan’s Eel Bot 2.0 trap is set up below the dam by the old bolt factory once powered by the waterfall.Credit: Leslie Yager 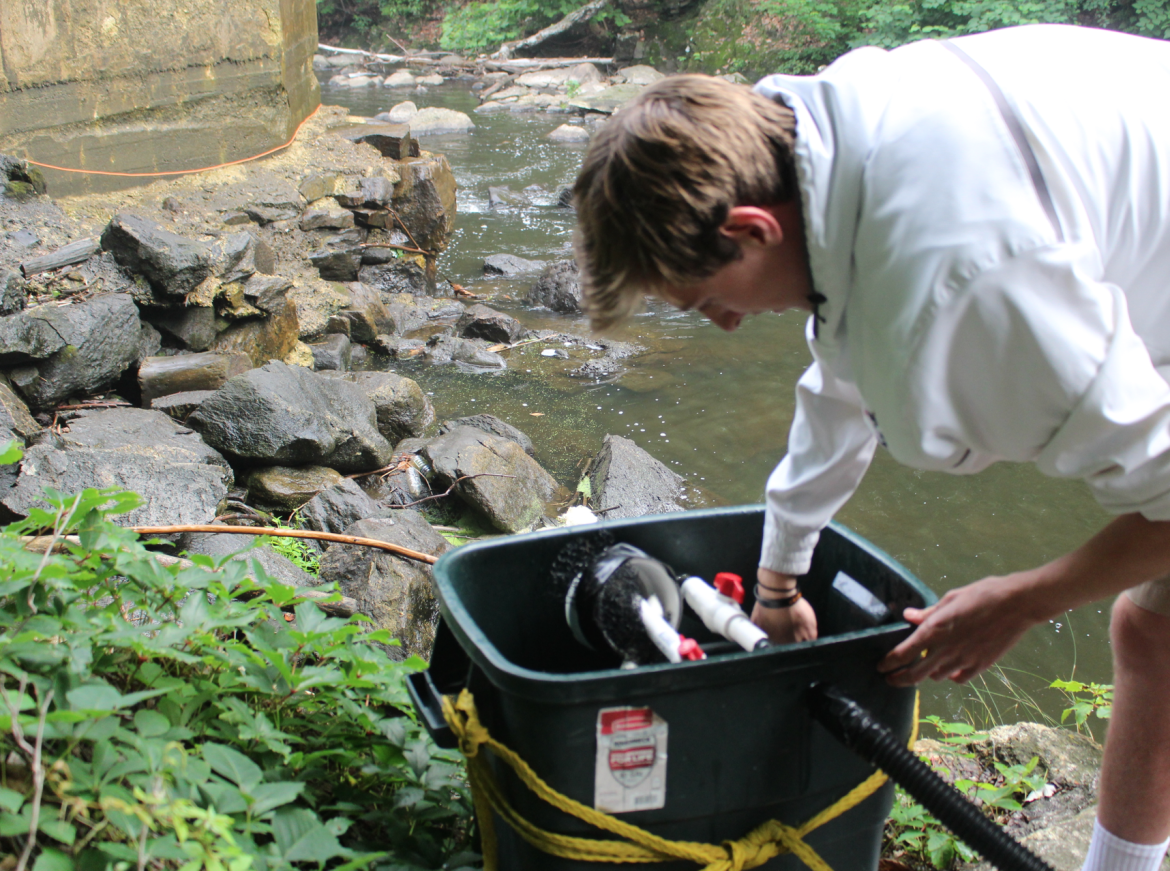 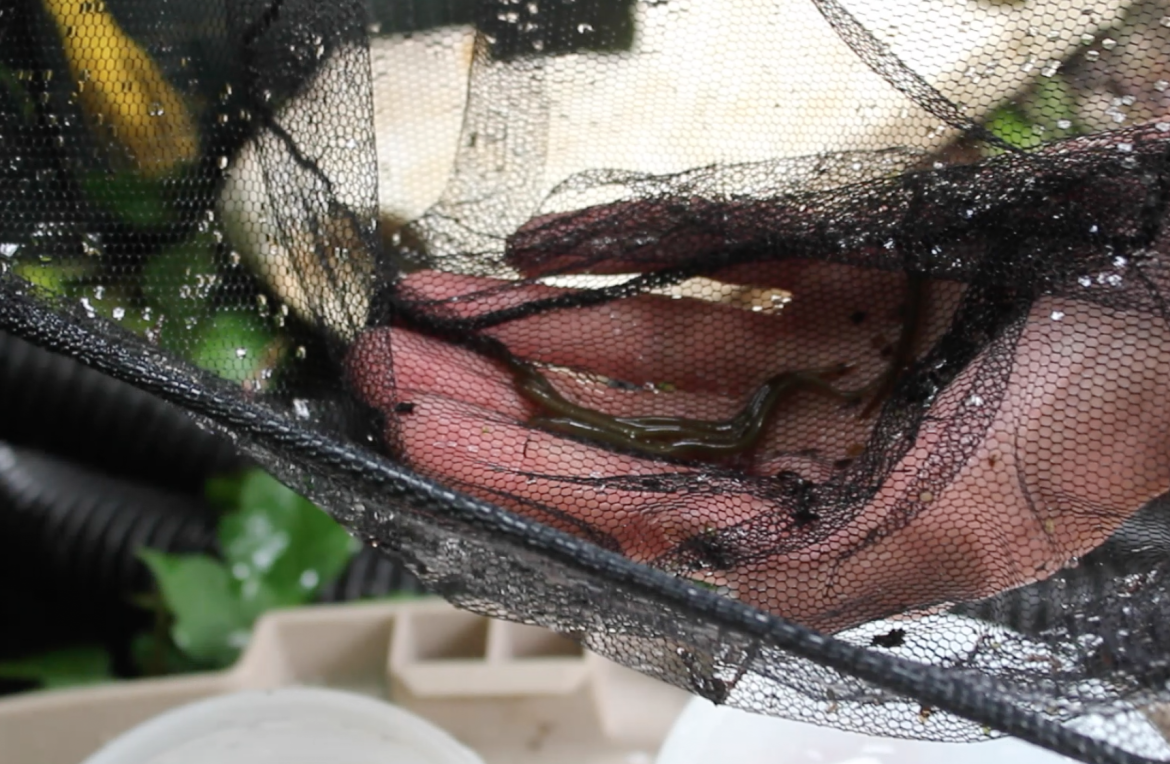 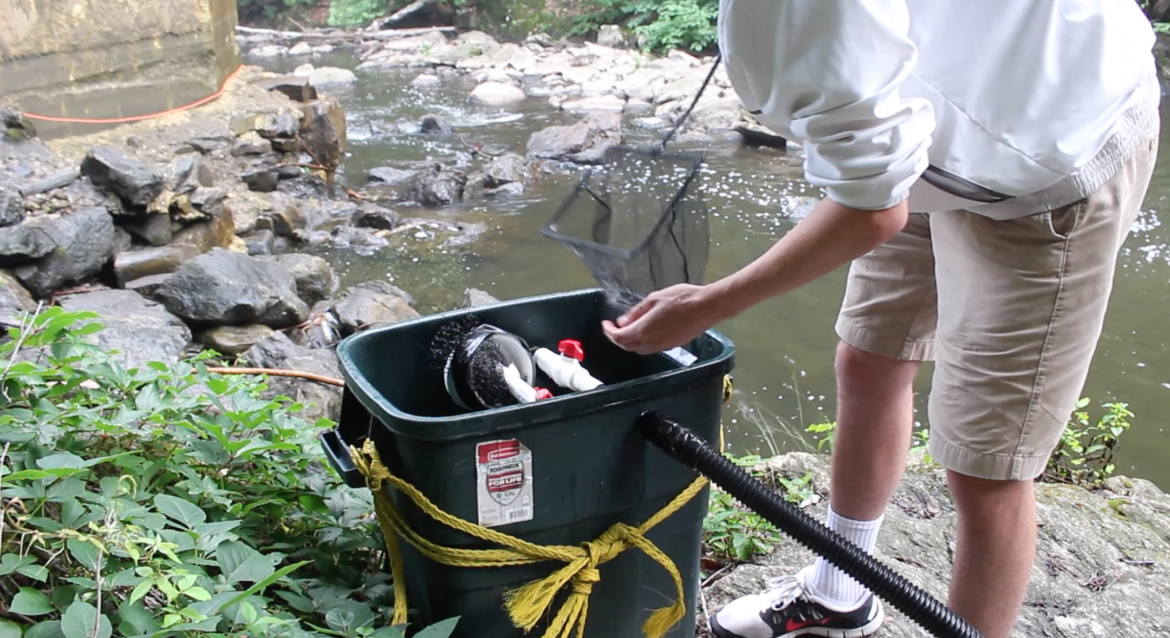 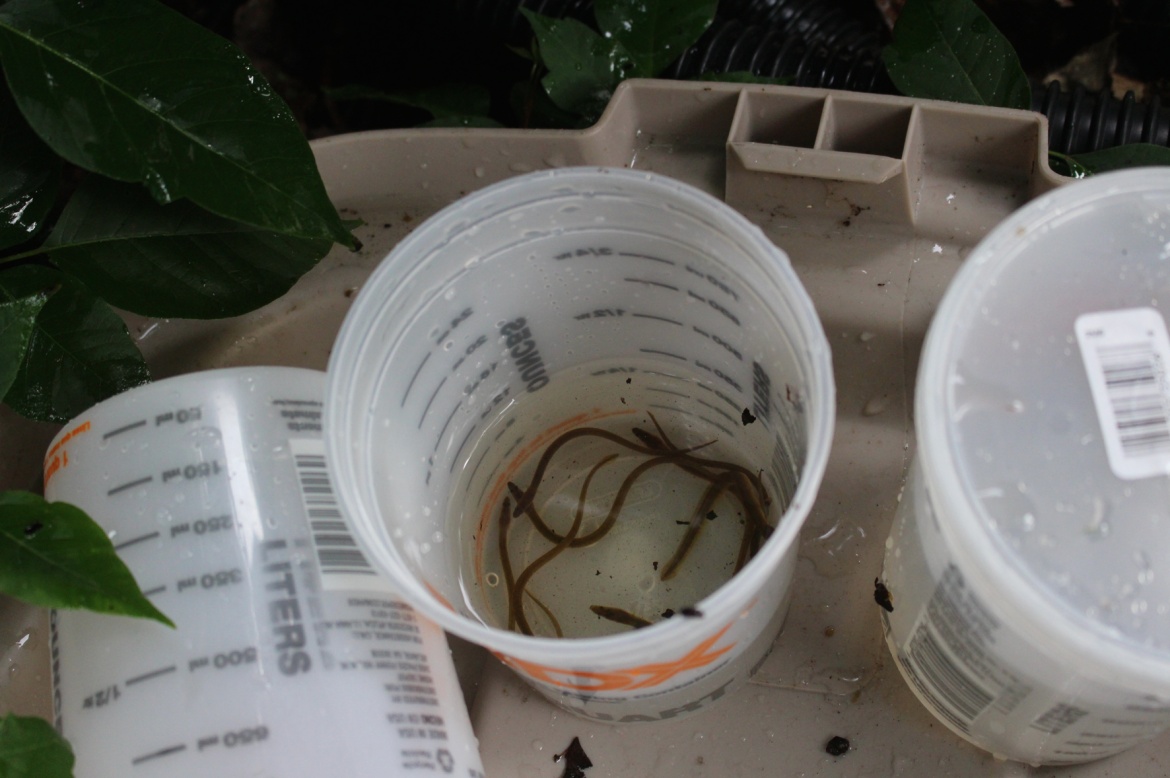 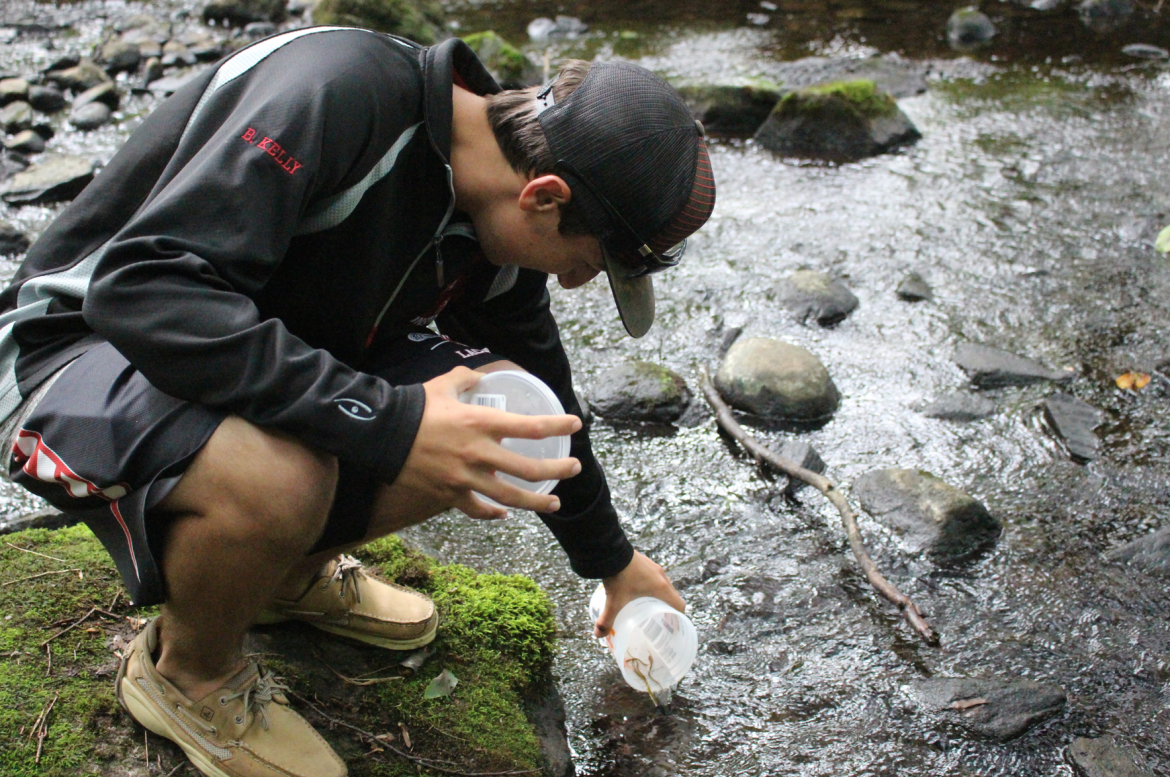 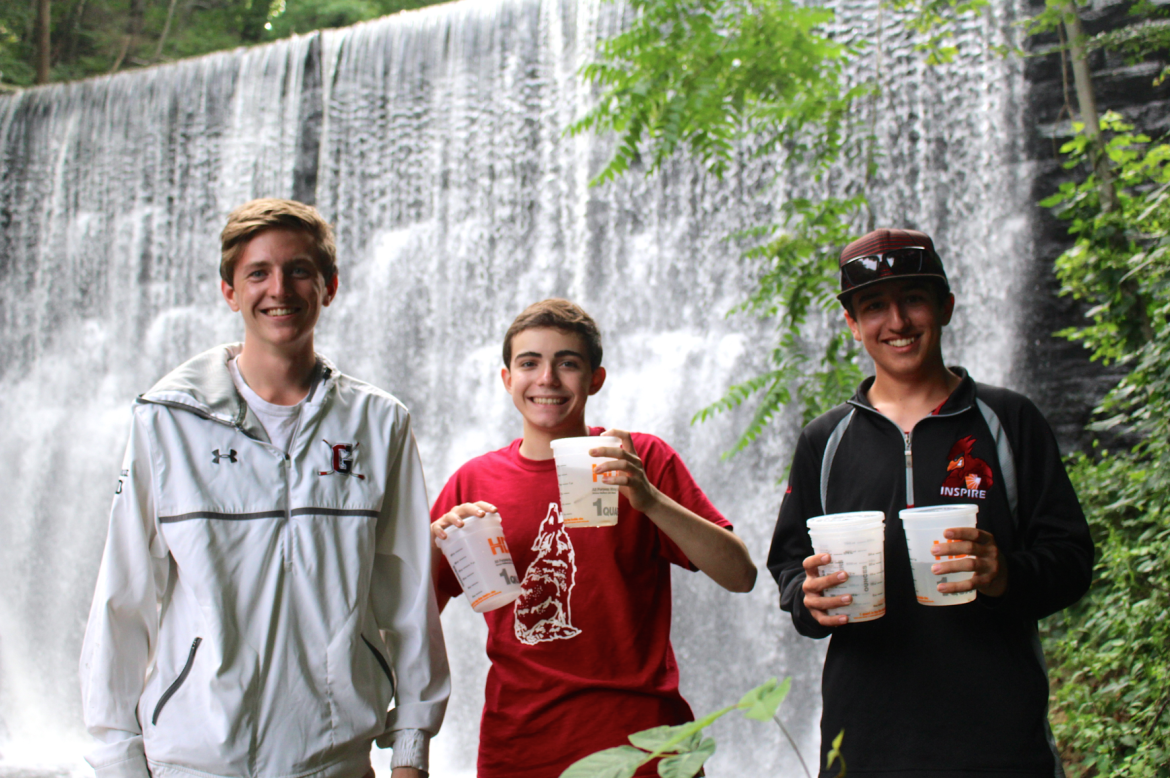 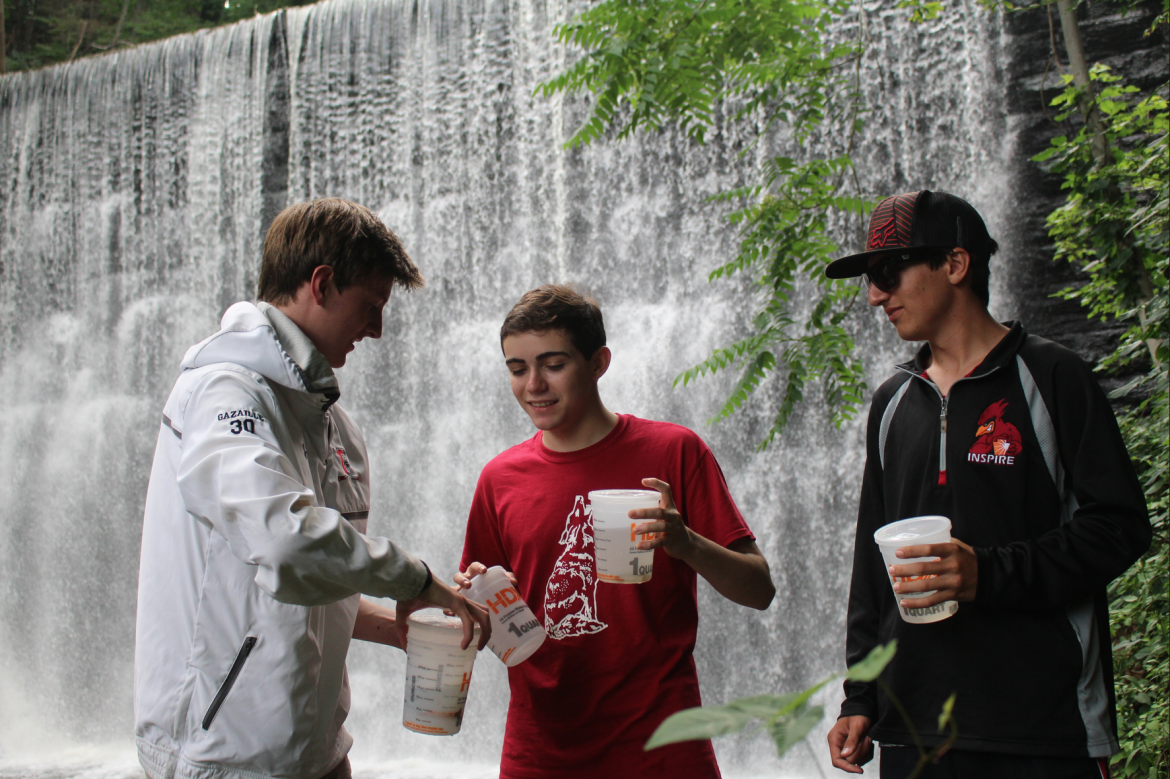 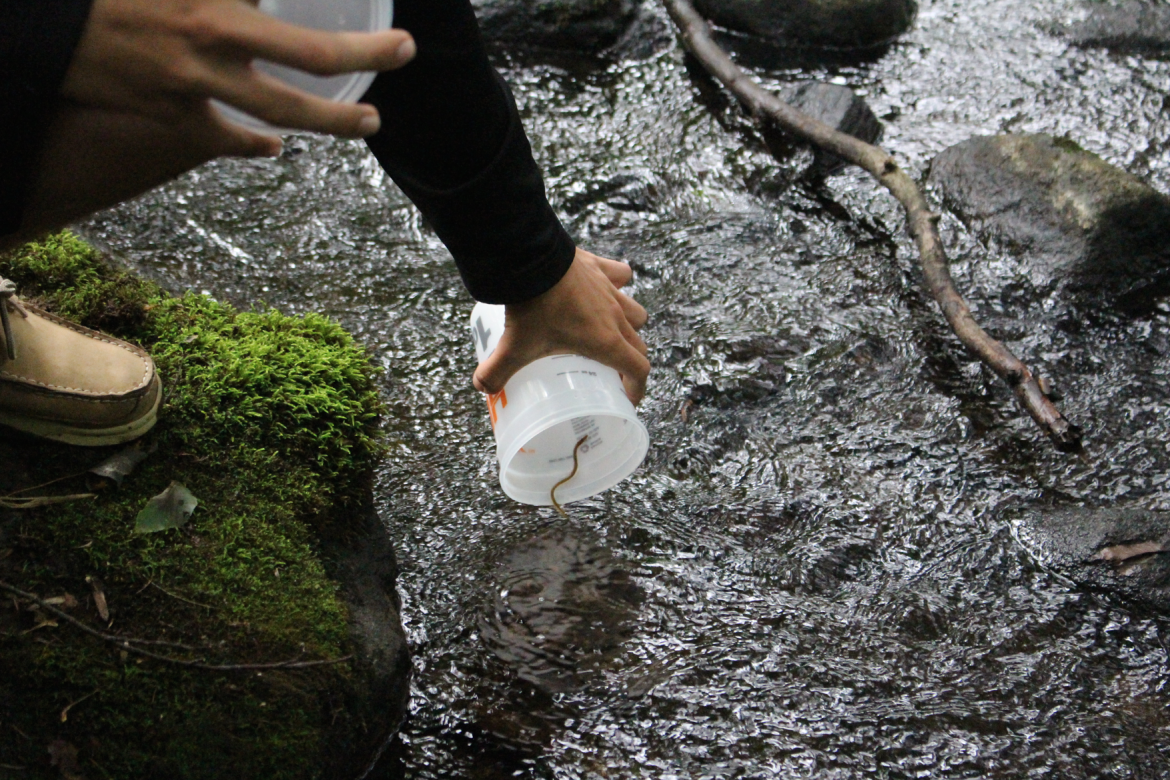 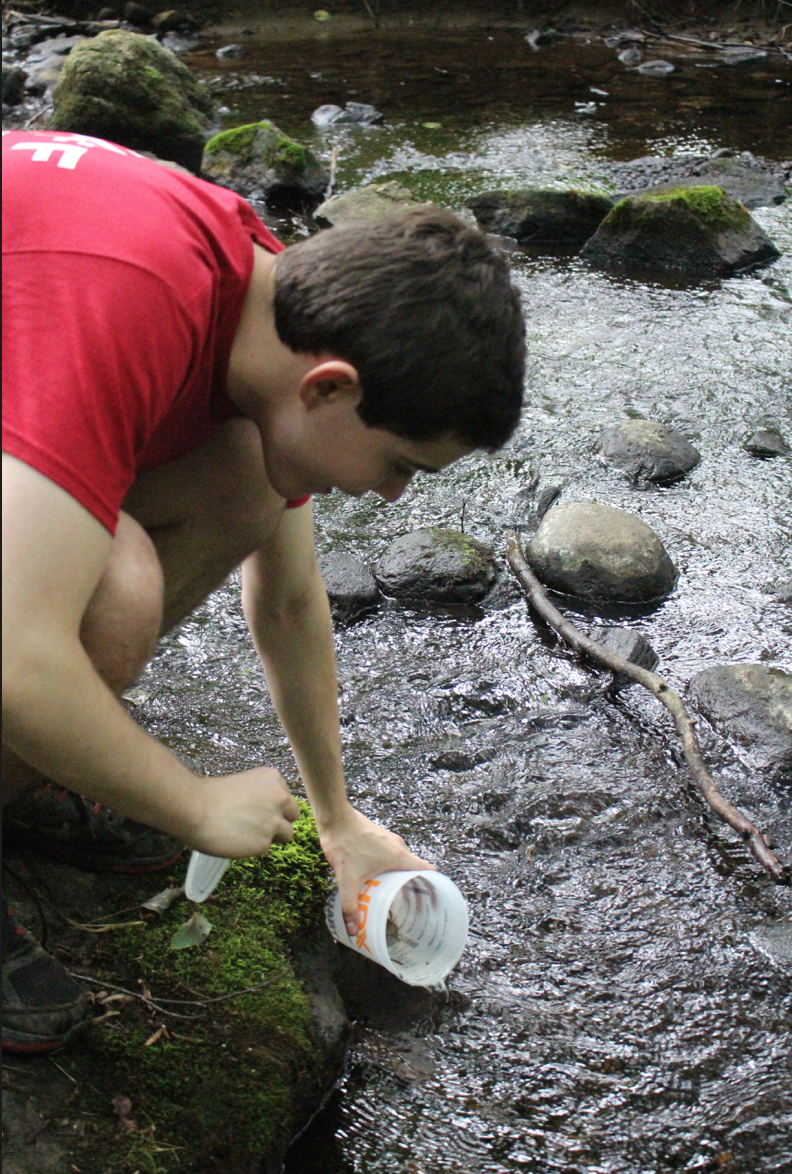 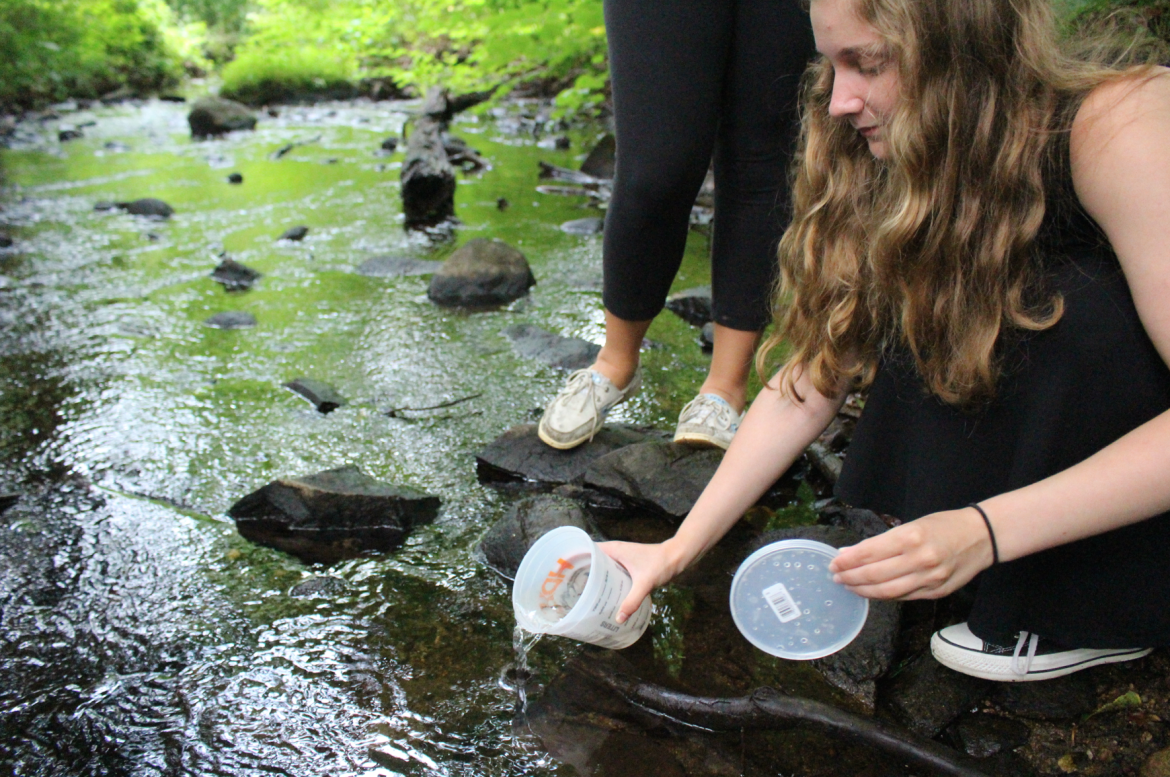 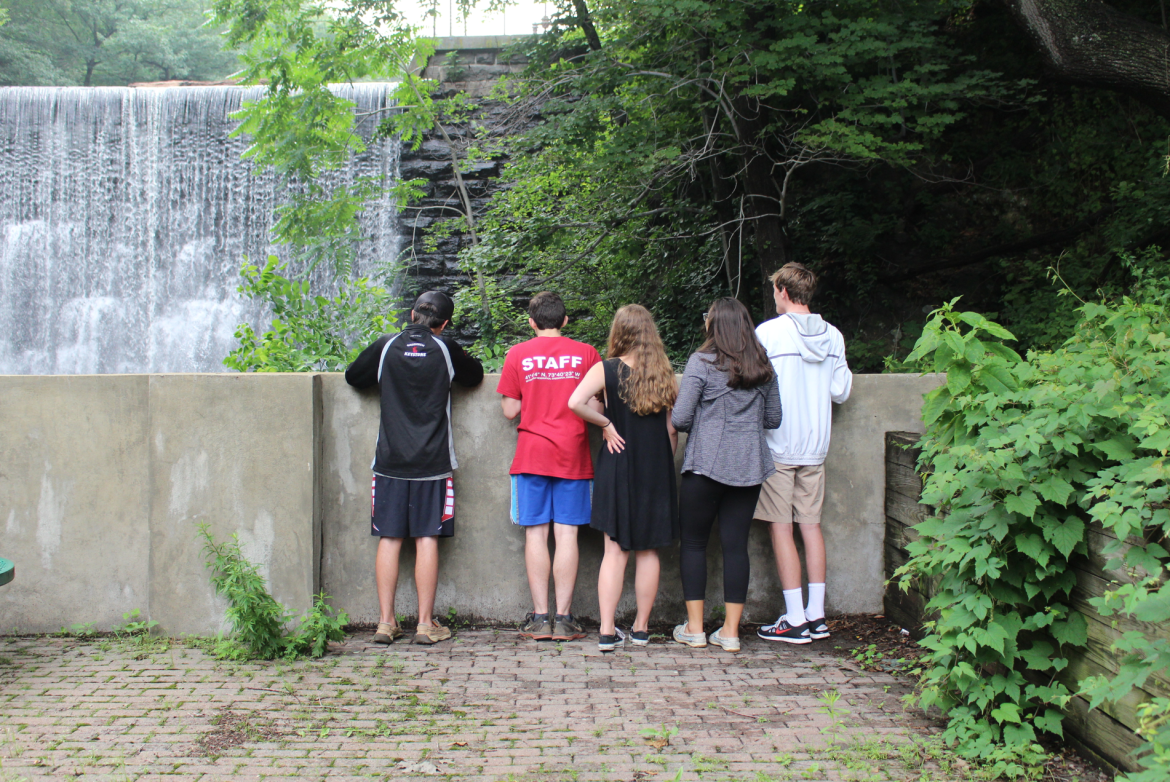 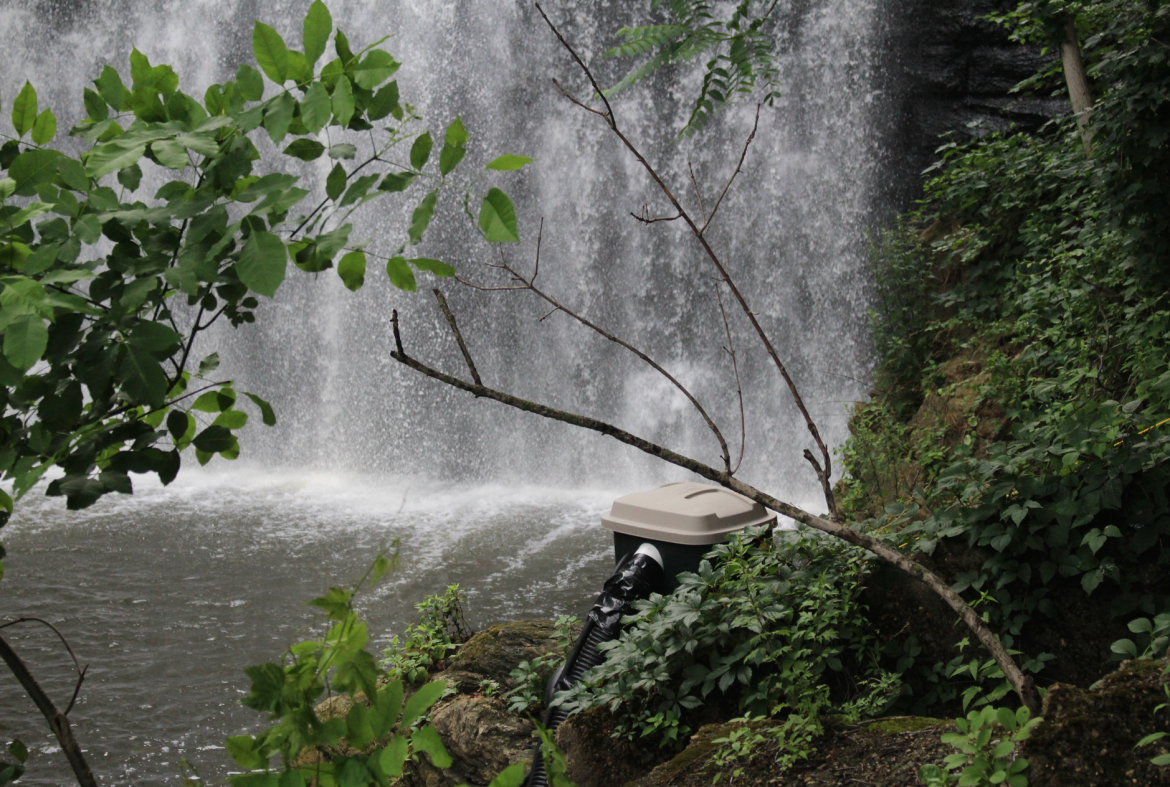 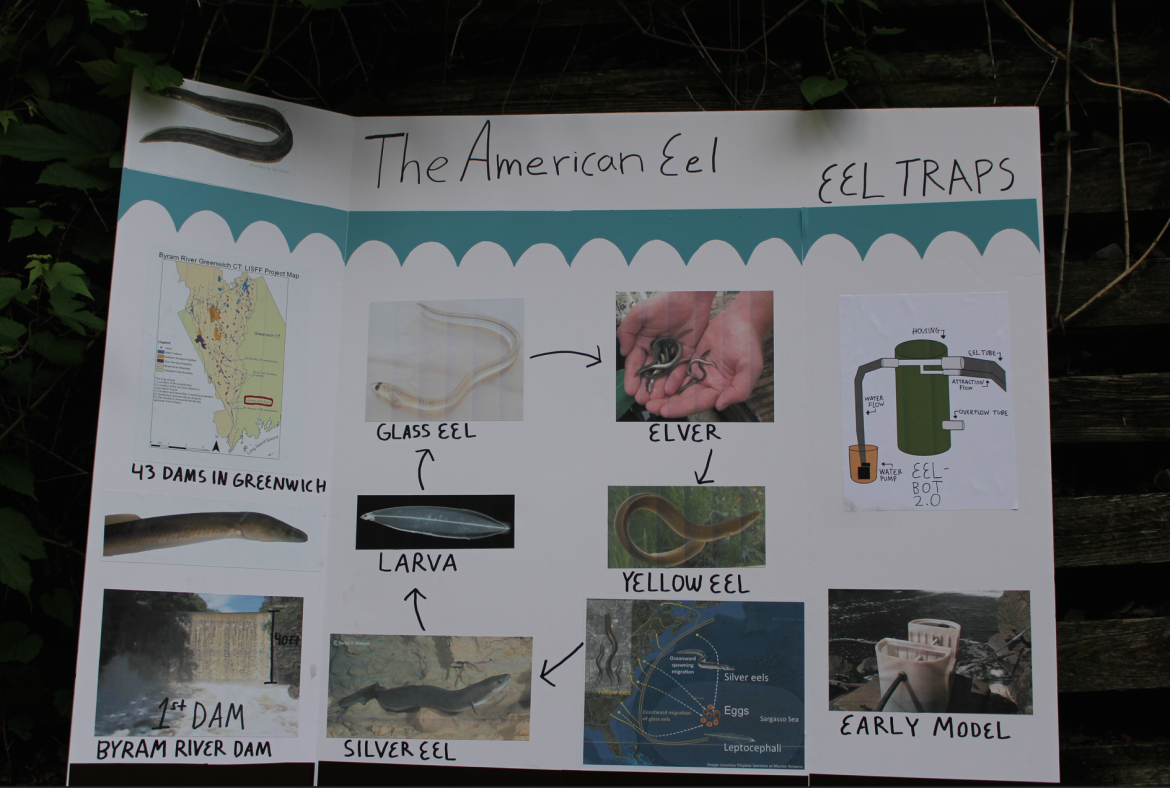