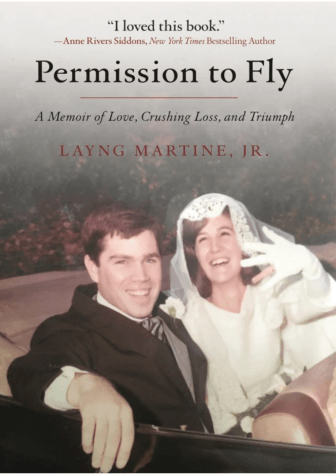 Layng Martine, Jr.’s first book, Permission to Fly, A Memoir of Love, Crushing Loss, and Triumph, inspires and captivates everyone who reads it.

Martine will be reading from and talking about his book on Wednesday, September 18th – 6:30pm at Christ Church, Greenwich.

Growing up in North Stamford and then Greenwich, Layng had some hilarious escapades and learned valuable life lessons by being independent, hard-working and resourceful.

Thanks to his mother, Jean Martine, he believed there was nothing he could not accomplish if he kept trying. As a young husband and father, Layng was determined to make a living by writing songs. After many detours and failures, Layng eventually moved his family to Nashville.

Over the years he wrote hits for Elvis, Reba McEntyre, Trisha Yearwood, the Pointer Sisters and many others. He was inducted into the Nashville Songwriters Hall of Fame. However, his biggest challenge lay ahead, and the story of the way Layng and his beloved wife Linda met that challenge is both moving and inspirational.

Permission to Fly is available in local bookstores and via amazon